Accessibility links
Flooding And Tariffs Causing Chaos For Farmers Weeks of rain across the Midwest and the Great Plains have kept many farmers from planting crops. On top of that, they are dealing with President Trump's ongoing trade dispute with China. 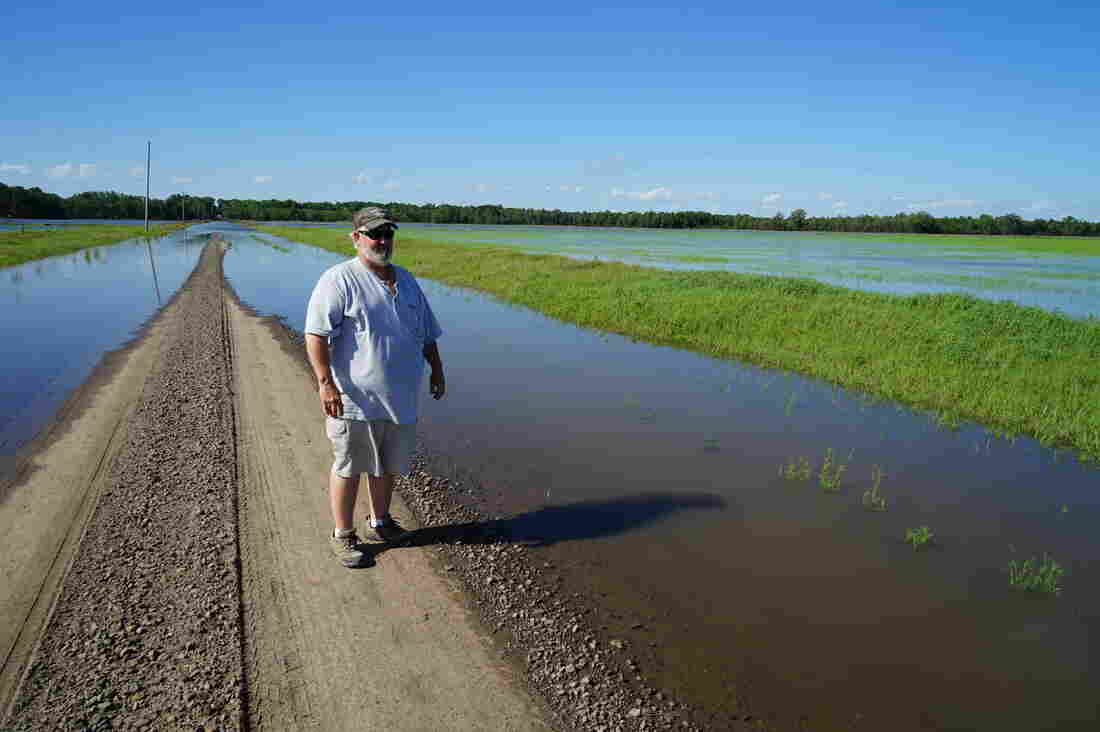 Robert Stobaugh looks at a field of rice, planted a few weeks ago, that has been flooded by the nearby Arkansas River. Nathan Rott/NPR hide caption 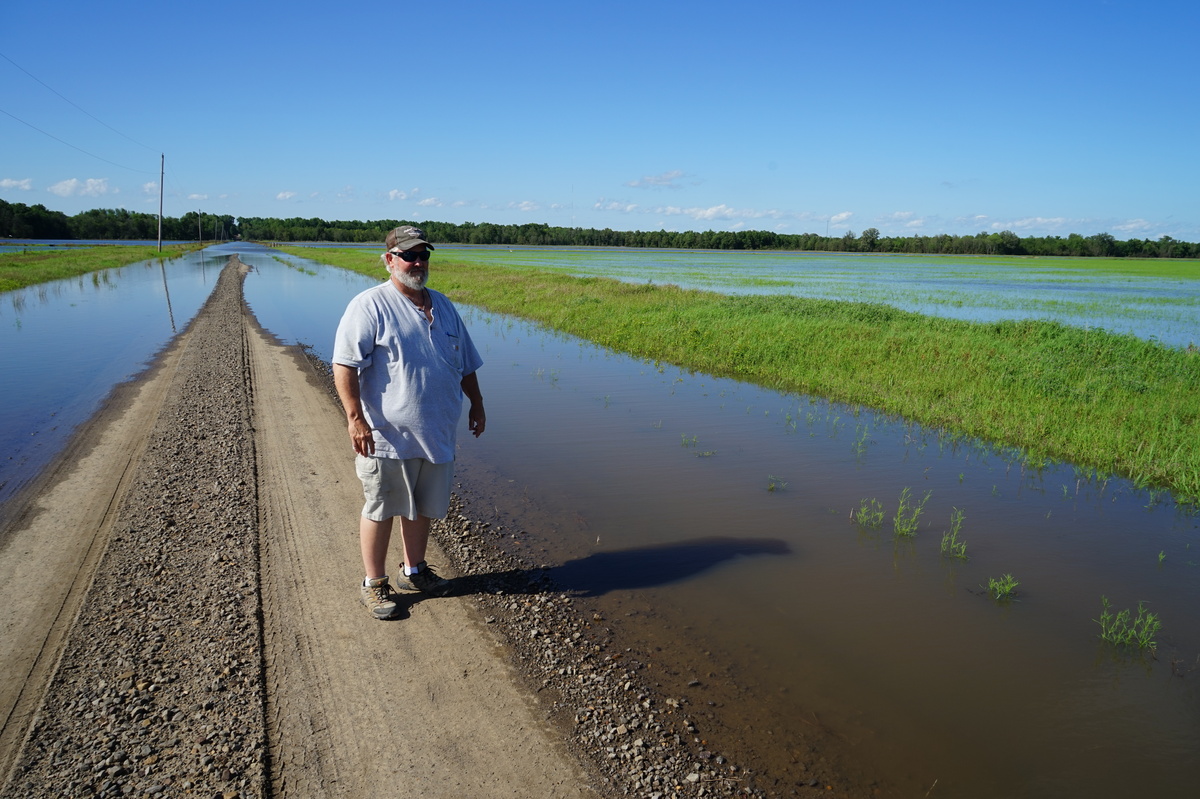 Robert Stobaugh looks at a field of rice, planted a few weeks ago, that has been flooded by the nearby Arkansas River.

Standing next to his mud-splattered red pickup in Central Arkansas, a tired Robert Stobaugh watches an osprey soar over a field of flooded rice. If anything can survive flooding, he says, it's rice.

"But even rice doesn't like this," he says, looking at the swamp of rust-brown water in front of him.

The fields around Stobaugh's truck are usually planted with soybeans, corn and rice. This year, because of weeks of heavy rain, most of them still haven't been seeded. Of the fields that have, Stobaugh says, many look like the field in front of him that has been swallowed by the surging Arkansas River.

The osprey dives low over the pooled water and ruined crops.

"I'm sure their hunting grounds have been vastly expanded by the water," Stobaugh says with a chuckle. "Tears of joy and tears of sadness are the same color. So if you don't laugh a little with all this stuff, you just about go crazy."

Farmers up and down the Arkansas River, the Missouri and the Mississippi are experiencing an unusual — unprecedented, some would say — combination of circumstances this year that are putting many in a difficult situation.

Weeks and weeks of rain across the Midwest and the Great Plains have kept many farmers from planting crops. Surging rivers have broken levees, flooded fields and brought barge traffic to a halt on some of the nation's biggest waterways.

"Even if I could get a good crop planted and cut, I don't know how I'd move it," says Matt Crabtree, a farmer in the Arkansas River Basin and president of the Farmers Cooperative. 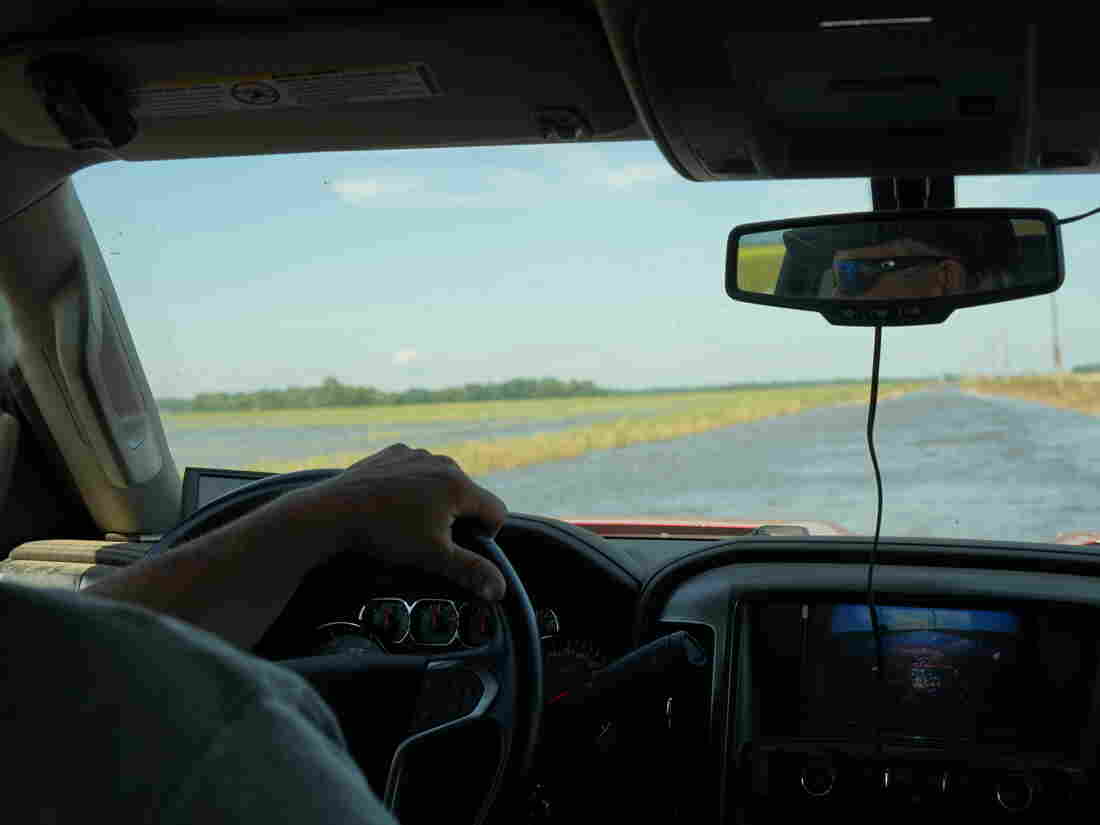 Robert Stobaugh tries driving his pickup down a flooded road on his property. He backs up when the water reaches the wheel wells. "I just don't feel comfortable going any farther," he says. Nathan Rott/NPR hide caption 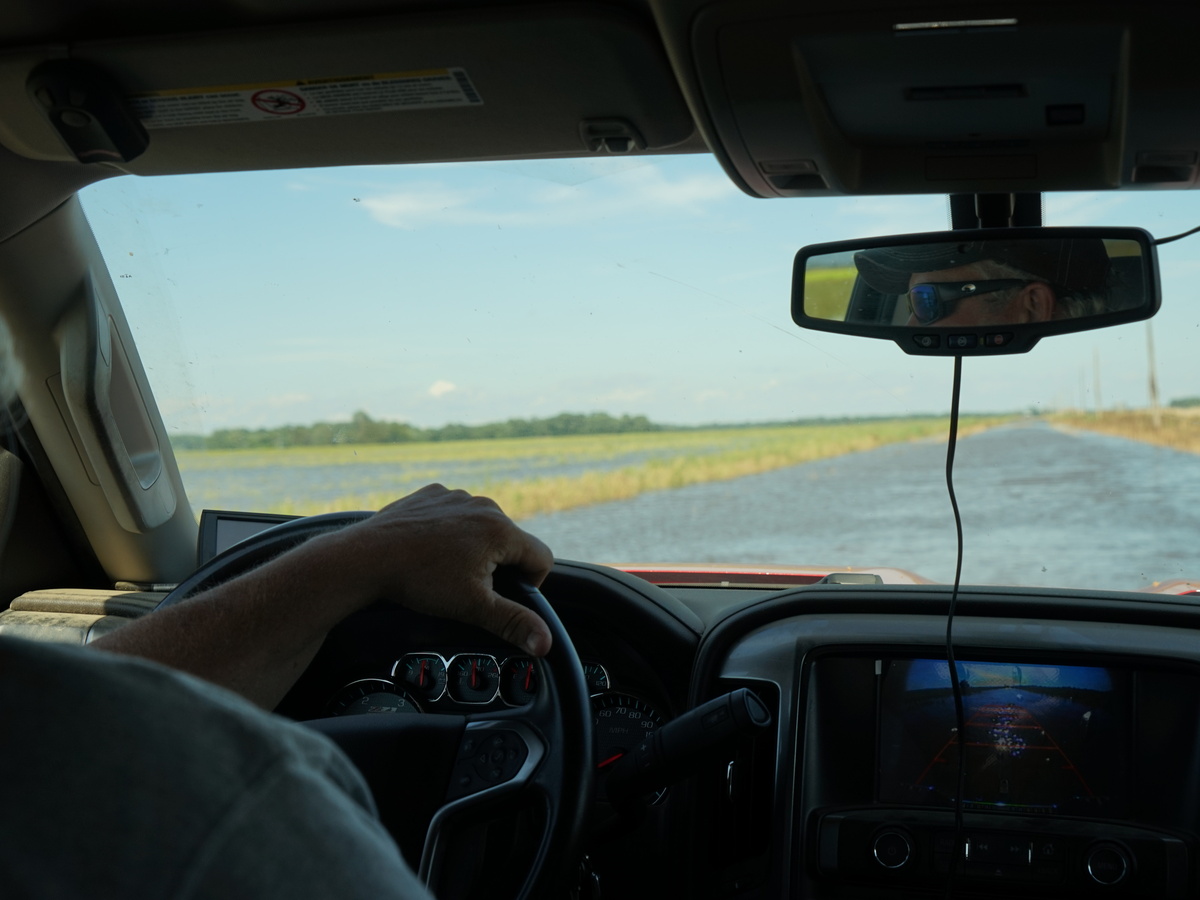 Robert Stobaugh tries driving his pickup down a flooded road on his property. He backs up when the water reaches the wheel wells. "I just don't feel comfortable going any farther," he says.

On top of that, farmers are dealing with the effects of President Trump's ongoing trade dispute with China and the prospects of a new one with Mexico.

"If you just had one individual [issue], farmers would take a loss but it probably wouldn't be all that bad," says Jeremy Ross, a soybean agronomist with the University of Arkansas' Division of Agriculture. "But then you start adding all these together, and it just starts snowballing, and it just becomes this big huge problem."

In Arkansas, like many other parts of the country, the naturally caused problems started early this year.

Intermittent rains through April and May saturated the soil and kept many farmers from planting.

According to recent data from the U.S. Department of Agriculture, U.S. corn planting was at its slowest pace in recent history.

At this time last year, the biggest corn-producing states in the U.S. had planted 90% of their acreage. This year, roughly 60% has been planted.

Soybean and rice crops have been behind, too.

We haven't planted rice this slowly in about 25 years. For many farmers, it's completely catastrophic.

"We haven't planted rice this slowly in about 25 years," says Jarrod Hardke, a rice agronomist at the University of Arkansas' agriculture division. "For many farmers, it's completely catastrophic."

Compounding the problem, the window to plant corn or rice with the hope of still getting a good harvest is closing, and the National Weather Service is warning of more heavy rains later this week.

Farmers who might look to soybeans as a fill-in crop are finding themselves square in the middle of the trade dispute with China. 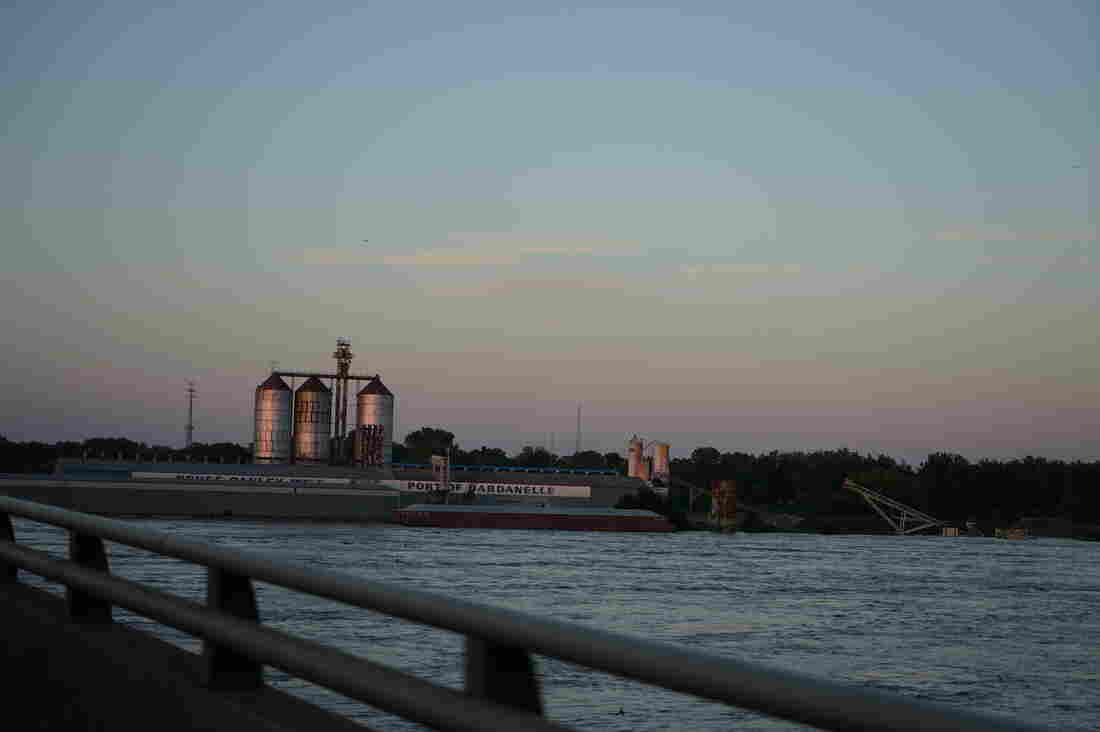 Transportation and industry have been disrupted all along the Arkansas River. Arkansas Gov. Asa Hutchinson says the high water is costing the state economy an estimated $23 million each day. Nathan Rott/NPR hide caption

China is a major customer of American soybeans, but the country has reportedly put a hold on buying U.S. soybeans because of escalating trade tensions.

The Trump administration has announced a $16 billion aid package for farmers who are being hurt by the yearlong trade war between the U.S. and China, the world's two largest economies.

Agriculture Secretary Sonny Perdue says the package ensures that "farmers will not bear the brunt" of the trade war.

But U.S. farmers and agriculture workers are now facing the prospect of another trade war, this time with the United States' southern neighbor.

President Trump says he'll begin imposing tariffs on all Mexican goods beginning June 10 unless that country does more to reduce immigration to the U.S. from Central America.

Irwin, who has watched the impact of the China trade dispute and the "exceptional" weather events occurring around the country, says it's not all bad though.

Many farmers were facing projected losses this year because of low prices and surpluses of corn and other grains. The fast-fizzling farming season may change that outlook.

"Mother Nature has basically provided a clearing of the decks of our surplus supplies that we needed to get higher prices," Irwin says.

That doesn't take away the sting in the short term for many growers around the country who are reluctant to rely on crop insurance or federal aid packages to soften the blow. And higher prices won't do much for growers who aren't able to produce any crop.

But, Irwin says, the agriculture economy is complicated, and it might take some time yet to see how it all shakes out. 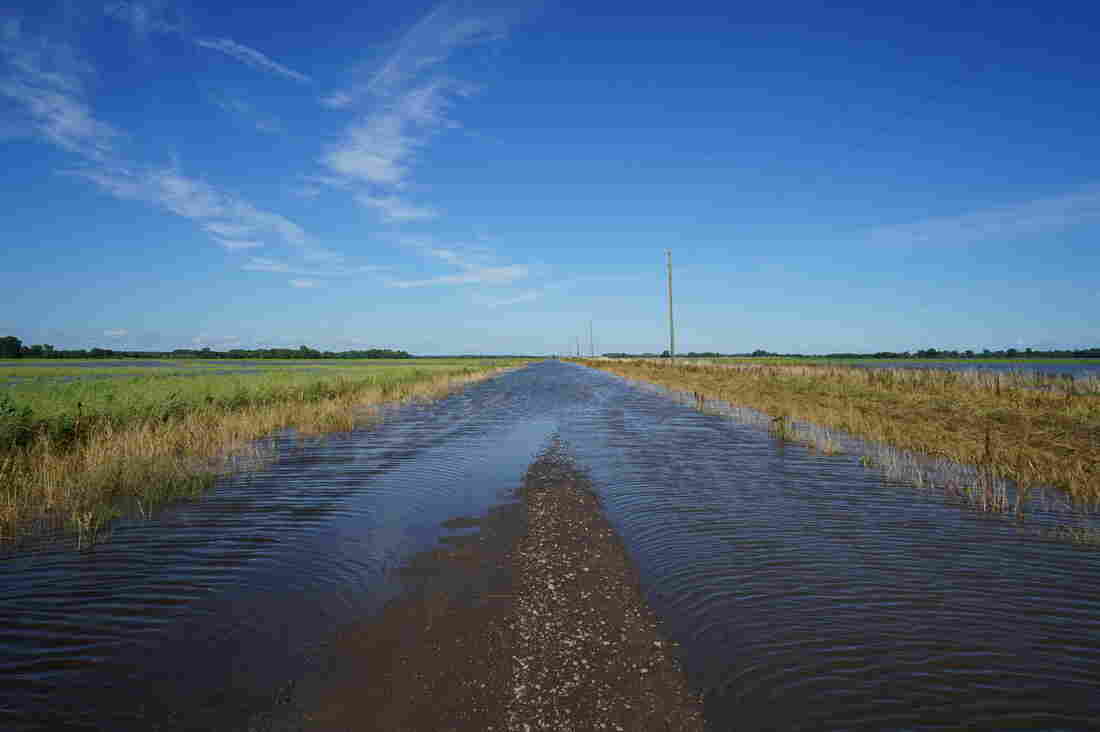 A flooded road and empty soybean fields in central Arkansas. The road is usually about a mile from the Arkansas River, but it has been inundated by recent flooding. Nathan Rott/NPR hide caption 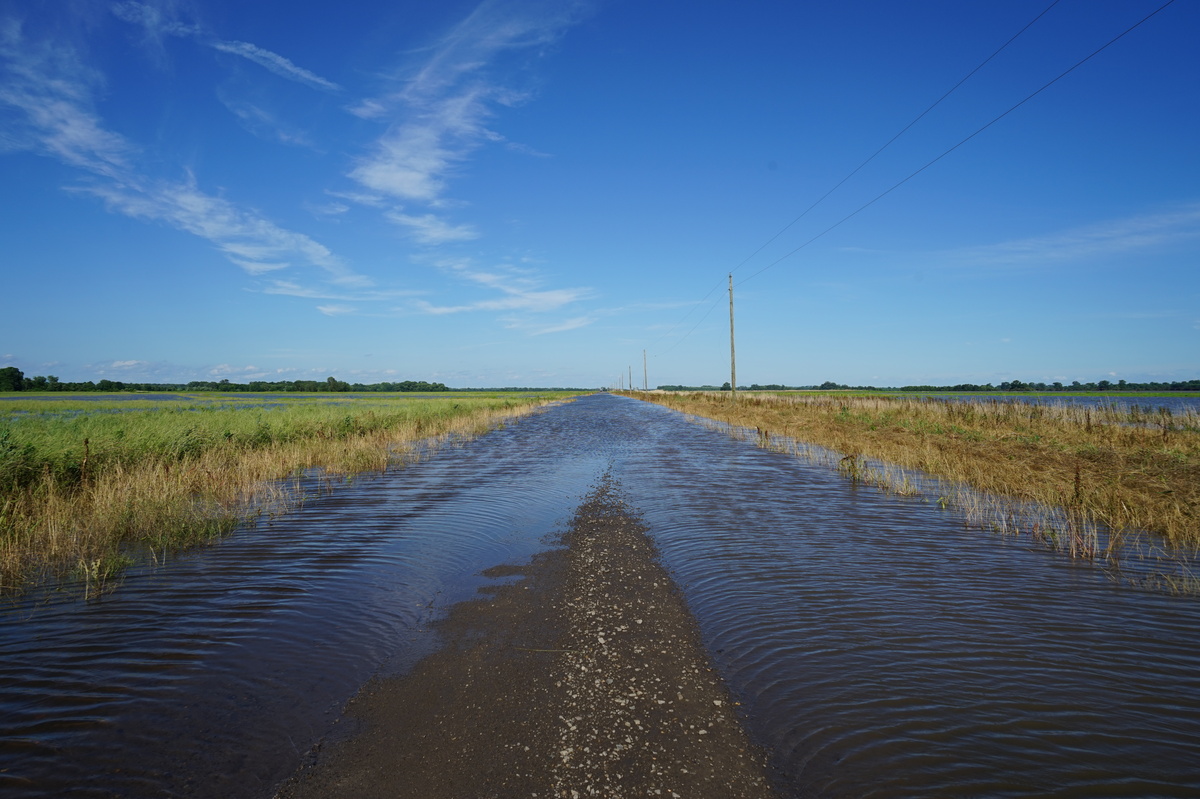 A flooded road and empty soybean fields in central Arkansas. The road is usually about a mile from the Arkansas River, but it has been inundated by recent flooding.

Leaning against his truck back in Central Arkansas, Stobaugh tries to remain optimistic.

"We're not going to lay down and just let this thing steamroll us and go to the house. That's not what's going to happen," he says. "We get an opportunity to get some crops in here and we think we can do anything, we're gonna do it."

With more rain in the forecast, though, and no end to the trade disputes in sight, the prospects for many farmers in his region are looking increasingly bleak.

Acknowledging that, Stobaugh sighs and says, "We have a very slim chance of eking out anything that resembles what we're typically blessed to do."