Accessibility links
Caster Semenya Hopes to 'Run Free' Again After Swiss Supreme Court Offers A Reprieve "I hope that following my appeal I will once again be able to run free," the Olympic champion athlete said Monday. 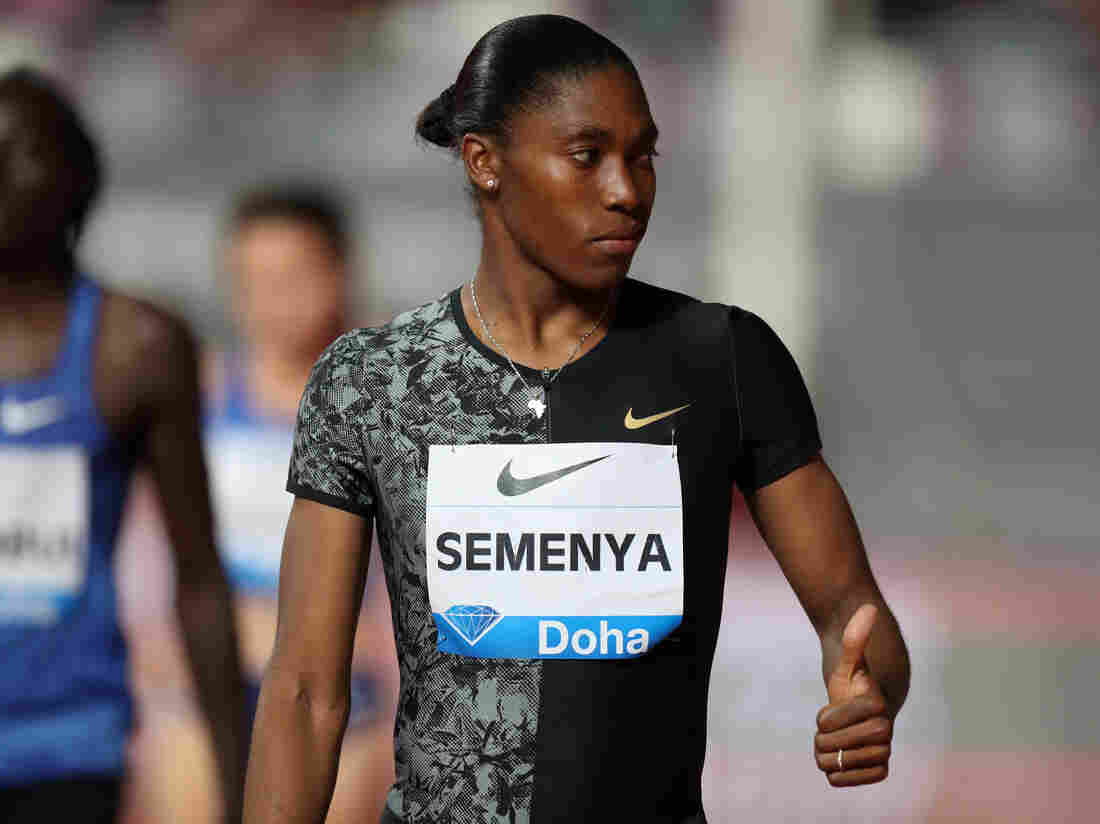 Caster Semenya has won a temporary block against regulations that would require her to lower her testosterone levels artificially before being allowed to compete in some races. Ibrahem Alomari/Reuters hide caption 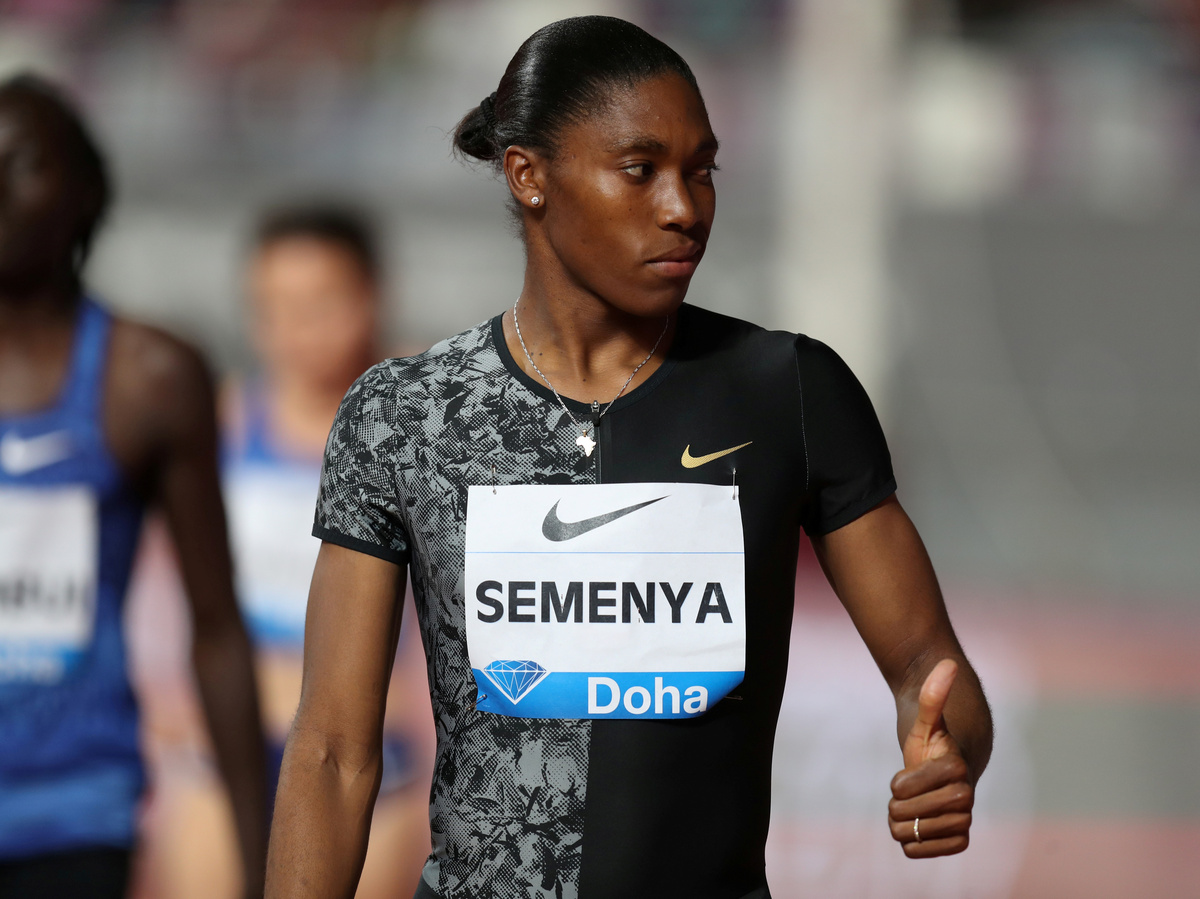 Caster Semenya has won a temporary block against regulations that would require her to lower her testosterone levels artificially before being allowed to compete in some races.

Switzerland's Federal Supreme Court has temporarily blocked a rule that kept track star Caster Semenya from competing, saying she should be allowed to race while her appeal proceeds. Track and field's international governing body has said Semenya can't compete in her signature event unless she lowers her testosterone level.

The Swiss court ruled Monday that Semenya, an Olympic and world champion in the 800 meters, should be allowed to "compete without restriction in the female category" during her appeal.

The International Association of Athletics Federations recently changed its rules, with the result requiring that Semenya, 28, lower her testosterone level artificially before she can compete against other women in the 800 meters and other track events.

"I am thankful to the Swiss judges for this decision," South Africa's Semenya said in a statement about the ruling. "I hope that following my appeal I will once again be able to run free."

Semenya's attorney in the Swiss case, Dorothee Schramm of the Sidley Austin law firm, said the court had given Semenya "temporary protection."

"This is an important case that will have fundamental implications for the human rights of female athletes," Schramm said.

In the next step in the legal dispute, the Swiss Federal Supreme Court will give the IAAF a chance to submit its arguments for maintaining its regulation that effectively bans Semenya — who has refused to manipulate her testosterone level. The court will then issue what could be its final ruling on the IAAF's prohibition that blocks female athletes with high testosterone levels, even in cases where those elevations occur naturally. The IAAF has warned those female athletes that they need to drop their testosterone levels to be eligible to compete.

"The IAAF suggests this reduction be done by taking hormonal contraceptives, and it emphasizes that surgical changes are not required," as NPR's Laurel Wamsley has reported.

Semenya's case has raised complicated questions, including the nature of holding separate competitions for men and women, how much of athletes' abilities might be due to hormones and how to reconcile a blanket fairness policy with athletes who have what are called differences of sex development, or DSDs — a term that also applies to people who are known as intersex.

As NPR's Melissa Block has reported:

"Caster Semenya was raised as a female and is legally female. She's fighting rules that affect DSD athletes who have what are typically male XY chromosomes, who were born with internal testes and who have testosterone levels higher than the typical female range."

Last month, Semenya lost a separate case before the Court of Arbitration for Sport, which ruled that while the regulations regarding DSD athletes are discriminatory, they're also "necessary, reasonable and proportionate" as a way to ensure fair competition through regulating hormone levels.

Semenya contends that the IAAF's regulations unfairly discriminate against athletes on the basis of sex or gender, because they apply only to female athletes — and only to a subset of female athletes who have certain traits.

The IAAF's regulations require female athletes in restricted events — from the 400 meters to the mile — to keep their testosterone below a certain level for at least six months before a competition and to maintain it below that threshold as long as they want to be eligible to race.

The testosterone limit kicks in at 5 nmol/L (nanomoles per liter).

"Most females (including elite female athletes) have low levels of testosterone circulating naturally in their bodies (0.12 to 1.79 nmol/L in blood)," the IAAF said when it announced the new rule, "while after puberty the normal male range is much higher (7.7 – 29.4 nmol/L)."

When Semenya lost her appeal last month, the IAAF said she and other female athletes who have testosterone levels above 5 nmol/L had one week to bring them down, urging the women to begin their "suppressive treatment as soon as possible."

But instead of starting that treatment to preserve her eligibility, Semenya took her fight to another court.

"I am a woman and I am a world-class athlete," she said last week. "The IAAF will not drug me or stop me from being who I am."