Accessibility links
In 'Soulless,' A Journalist Takes On R. Kelly And The Business That Made Him A Star For nearly two decades, Jim DeRogatis has been searching for justice on behalf of the women who have accused the R&B singer of sexual and physical abuse. His new book is an account of those years. 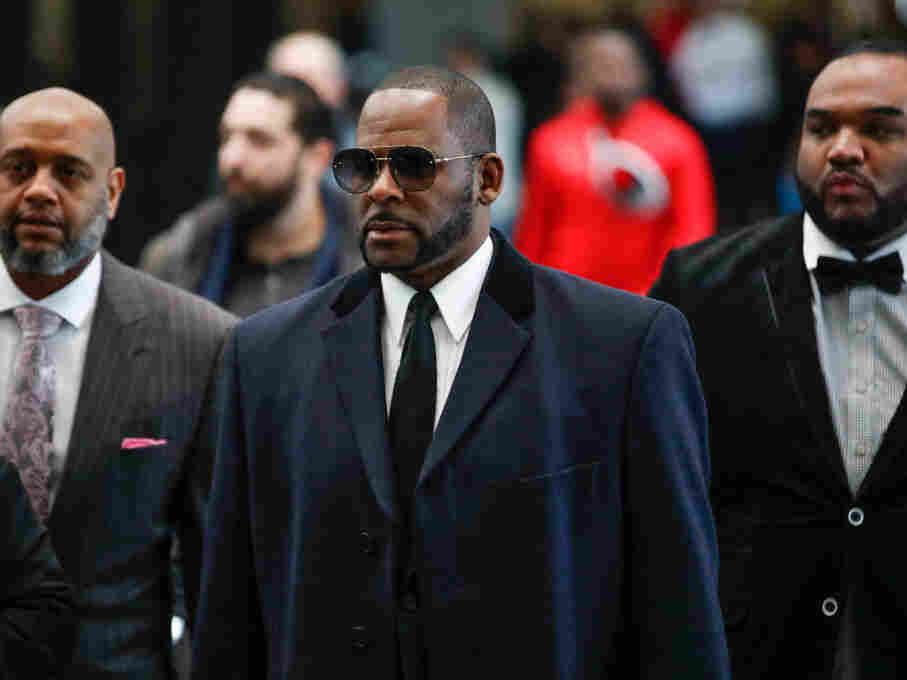 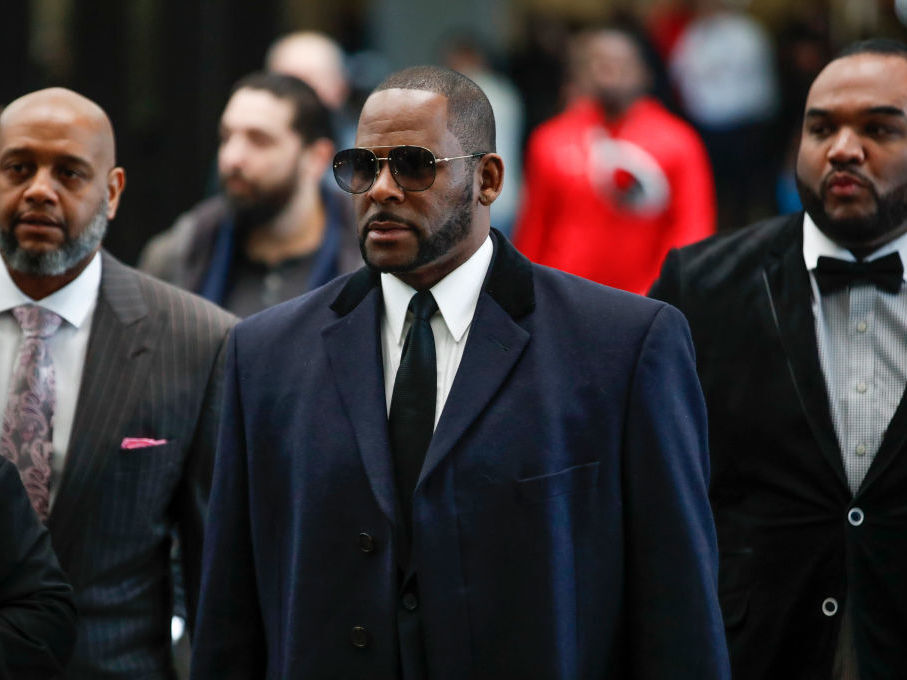 Singer R. Kelly, arriving in Cook County court for a hearing on sexual abuse charges in May.

R. Kelly has been a hero, an icon, a demon and a punchline — all at the same time. There is no neat narrative arc of ascendance, fall and perhaps eventual redemption: This is an R&B singer who was feted as an American idol, performing at the opening ceremony of the Winter Olympics, on the same day that Chicago police revealed that they were investigating him for child pornography. 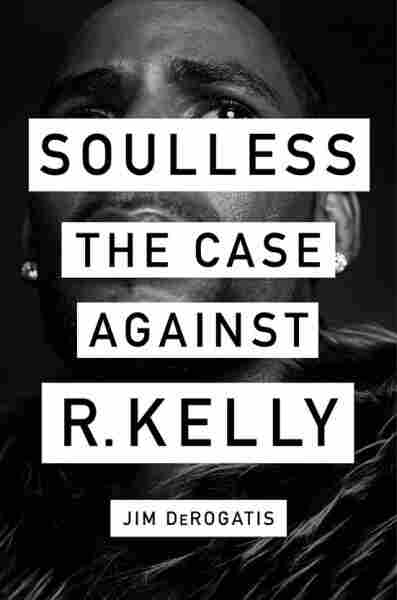 The Case Against R. Kelly

It's been 19 years since Chicago journalist and music critic Jim DeRogatis first wrote about Kelly and alleged his problem with "young girls" — and less than a week since Kelly was most recently indicted in Illinois, this time on charges of sexual assault and abuse. Far more recently, a widespread public reckoning against Kelly began, ushered in part by a push by black female activists called #MuteRKelly and by a six-part Lifetime documentary series called Surviving R. Kelly that aired in January. Kelly has denied every allegation.

DeRogatis has been making the case against R. Kelly in print for the better part of his professional life. In 2000, he and a colleague, Abdon Pallasch, printed the first allegations that he had assaulted an underage girl, in the Chicago Sun-Times. DeRogatis went on to break more accusations about Kelly at Buzzfeed, and he's currently a contributor at The New Yorker's website, where he continues to write about Kelly. He's now laid out two decades of tenacious reporting — and the larger questions he's continued to wrestle with throughout that time — in an absorbing, horrifying and damning book called Soulless: The Case Against R. Kelly.

Close followers of the saga will recognize the new information DeRogatis unveils in Soulless — for example, the name of the teenager who was the alleged victim in Kelly's first trial on child pornography charges, for which he was acquitted in 2008. (The young woman, along with her parents, refused to testify in that case, though 14 witnesses identified her during the trial.)

But for more casual readers, Soulless is an important testament of DeRogatis' slog towards justice, and of the forces that have seemingly cosseted R. Kelly and his career in the pre- and post-#MeToo eras. It's also a journalistic indictment: of Kelly himself; of the political machinery of Chicago; and of the music industry — from hangers-on to promoters to record labels to critics — that not only allowed the singer to persist in public life, but to become a global superstar. For whatever reason, DeRogatis writes, "Kelly seemed to be Teflon."

Perhaps unsurprisingly, two-thirds of the book are dedicated to what happened up to 2008. DeRogatis became a witness in that first trial in Chicago, and part of Soulless revolves around the ethical and journalistic questions that DeRogatis and the Sun-Times had to navigate in this situation. For journalists — especially freelance ones — there is also some illuminating discussion of the tribulations DeRogatis faced as he tried, in 2017, to find a home for some of his newer Kelly-related reporting. (DeRogatis says that he went through editing the piece at three different outlets — MTV, the Chicago Reader and member station WBEZ — that all eventually passed up publishing his work before it finally found a home at Buzzfeed. "That period provides a case study of the troubled state of journalism circa 2017," he writes.)

There's been some amount of pushback against DeRogatis for what's become something of a banner phrase: "It has always been about the girls." Some activists and music critics have taken exception, arguing that a white man has centered himself in this story; others have said that calling the alleged, black victims "girls" rather than women was infantilizing. But there's an argument to be made that DeRogatis, from his perch as a respected white music critic, first at the Sun-Times and WBEZ and later as a freelance journalist — has used his privilege to draw attention, as an ally, to alleged victims who might otherwise go unheard, if not scorned. And many of them have indeed been ridiculed. As one juror in the 2008 trial said said on-camera in Surviving R. Kelly: "I didn't believe them, the women ... The way they dress, the way they act — I didn't like them."

Moreover, DeRogatis argues that people who have tried to protect Kelly have consistently tried to adultify the teenage girls that the singer allegedly victimized. There's plenty of hard data showing that adults — whether white, black or of other races — typically view black girls as "less innocent and more adult-like than their white peers," and that black girls "need less nurturing, need less protection ... and know more about sex" than their peers of other races. His use of the word "girls" underscores the nature of the allegations. In the 2008 trial, for example, Kelly wasn't charged with raping a minor. Instead, people joked about the "pee tape."

As DeRogatis writes, over the years, R. Kelly cultivated a reputation onstage and off as a hypersexual man: The corollary, whether spoken or not, has always been that a woman who chose to get involved with him knew exactly what she was getting into. DeRogatis points out that Kelly's first criminal case took six years to come to trial — which meant that by the time the case reached a courtroom, the alleged teenage victim was now an adult woman, and would be perceived differently by a jury. ("This is a tried-and-true tactic when it comes to sex-crimes cases," an expert tells Abdon Pallasch. "Victory by delay.")

The last third of the book feels more hastily constructed than the earlier portions, but the rush to publish is understandable, given how much has happened in the first half of 2019; #MeToo has offered DeRogatis a fresh opportunity to retry his case, at least in the court of public opinion. Moreover, he has said that he's aware of 48 women with allegations against Kelly, and that he believes that a federal indictment is on the way.

I'd hesitate to call Soulless a culmination of DeRogatis' efforts; I can't imagine that DeRogatis has any plans to step away from what's become an integral part of his life's work. And he wrestles, repeatedly, with why his reporting fell on largely deaf ears for so long. Was it the limited reach that even a big city daily like the Sun-Times had at the dawn of the 21st century? Was the accretive nature of occasional newspaper reporting doomed to be less impactful than Surviving R. Kelly's tearful, on-camera interviews? In the first trial, was it the failings of a court case where, in DeRogatis' opinion, the judge was more interested in his own celebrity than in delivering justice? Was it the fact that jurors weren't allowed to see or hear mountains of evidence pointing to similar alleged behaviors?

For anyone interested in #MeToo, this is an essential book. But don't look to DeRogatis for any glimmers of hope or triumph. In the immediate aftermath of Kelly's 2008 trial, DeRogatis writes, "The words failed to come. I never felt like journalism and criticism mattered less." Frankly, he doesn't sound too hopeful about 2019, either. But his dogged pursuit of the truth is riveting, as is his persevering drive towards something that might resemble justice.