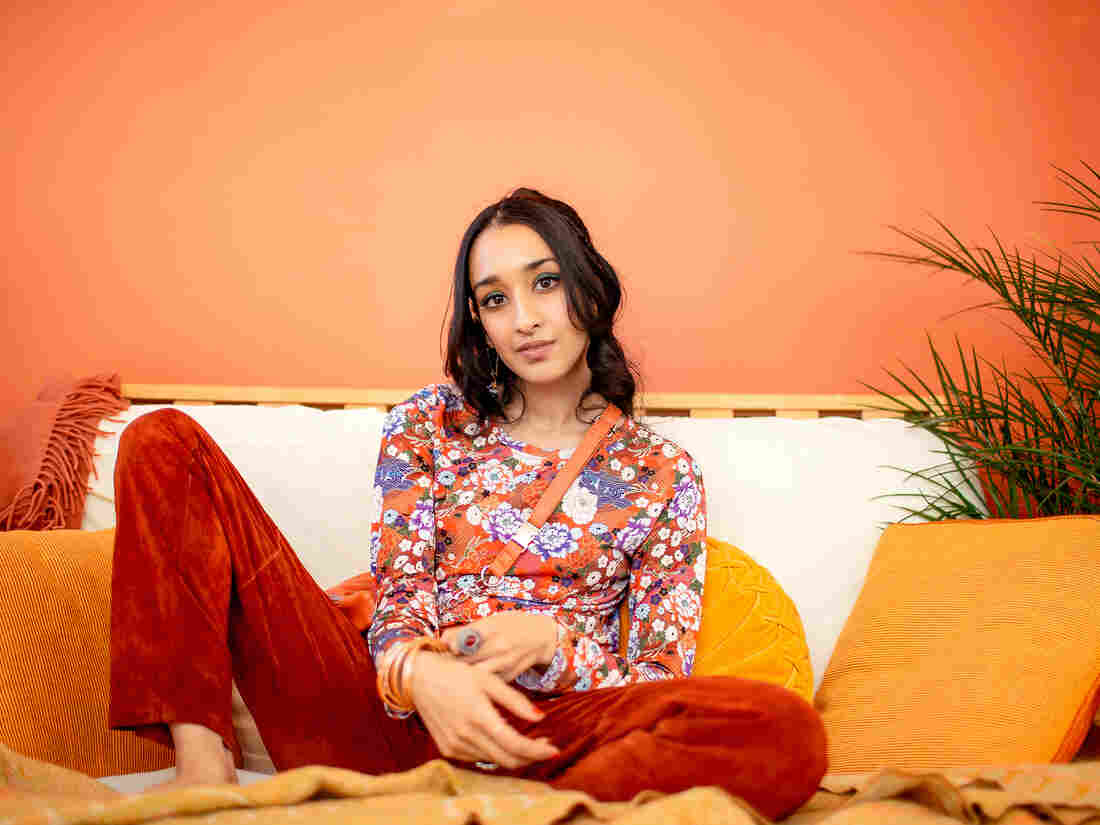 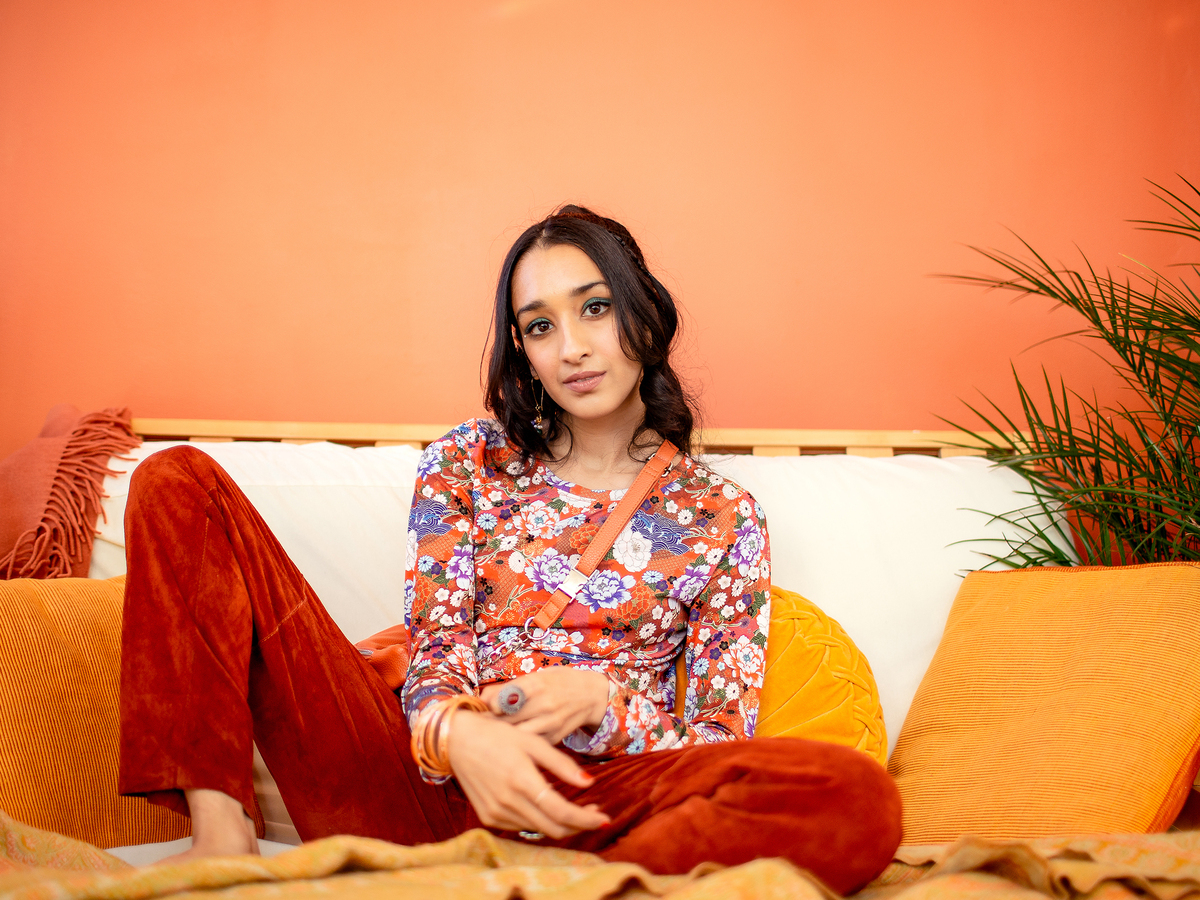 Raveena's debut album, Lucid, is comforting but nuanced, balancing cultures old and new by mashing up contemporary R&B with traditions from the South Asian diaspora.

The first time I saw Raveena live, the room at Washington, D.C.'s Songbyrd Music House was packed. Chatter from college-aged kids about gender politics and Instagram updates filled the venue before she got on stage, but for a Thursday night in the middle of summer, there weren't many drinks clinking. "The venues always tell me they never make money off the bar at my shows," the artist laughed backstage that night. "It's just a bunch of nice brown kids."

But Raveena wasn't there to sell drinks. For the majority of these early fans, her music was a conduit to spaces they wouldn't normally occupy en masse. And if there's one thing Raveena is about, it's making space.

The soft-spoken 25-year-old creates music that is comforting but nuanced, balancing cultures old and new by mashing up contemporary R&B with traditions from the South Asian diaspora. Since making her introduction with the 2017 EP Shanti, Raveena has quickly gained a following of fellow millennial South Asian Americans who, like her, feel themselves at a crossroads of identity, culture and time. Now, with her self-released debut album, Lucid, she is encompassing it all while telling a personal story of resolve.

New Music Friday: Our Top 6 Albums Out On May 31

Raveena Aurora was raised between Queens and Connecticut by Sikh-practicing, North Indian parents. Growing up with Bollywood soundtracks, Ella Fitzgerald and Nina Simone side by side, Raveena began writing songs at 13 and experimenting with different genres. Inspired by soul queen Minnie Riperton and Indian jazz fusion star Asha Puthli, Raveena worked for years on her melismatic runs. It was Shanti, a sleeper hit released not long after the artist graduated from NYU Tisch School of the Arts that perked ears online — a 15-minute love potion of warbling synths, soft piano, delicate harps and the artist's hypnotic, hazy but deliberate vocals. "You still don't understand, a woman is holy / Your fake apologies would work on the old me," she coos on the EP's linchpin track "If Only." Her airy delivery goes down easy, but the words hit hard.

Last year, propelled by Shanti's hundreds of thousands of Spotify and SoundCloud streams, resolute fans and a breakout performance of "If Only" on the YouTube series Colors, Raveena set out on her first solo tour. By the summer she had scored a management deal with 4Strikes, the force behind acts like Odd Future and BROCKHAMPTON, and by fall her name started popping up on festival lineups like Camp Flog Gnaw.

When I visited Raveena at her Queens, N.Y. apartment last fall, she was rehearsing for Flog Gnaw and deep in the process of making Lucid. Every song on the album was written there, her partner/producer Everett Orr at the helm of each impeccable beat. Within the confines of her attic's two rooms — one a mint-green meditation room, the other a home studio with burnt orange walls and a surprisingly plush futon — it's obvious she lives and breathes the same atmosphere her music creates. From the D'Angelo and Erykah vinyl LPs to the wind chimes to the window sill crystals to innumerable plants slinking to find the sun, everything in the space has a calming effect. Softness is her strength; this place is where she harnesses it. 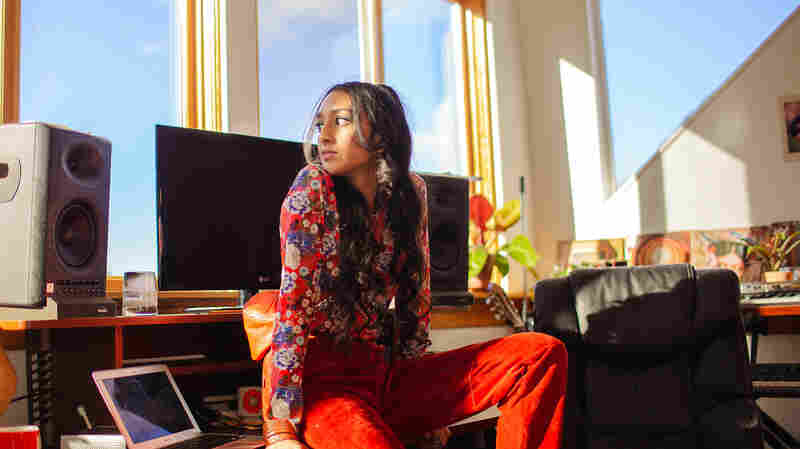 "I need to be involved in every step of the process," Raveena says. In addition to songwriting, the artist has directed many of her own videos and oversees the staging of her live shows. Cameron Robert for NPR hide caption 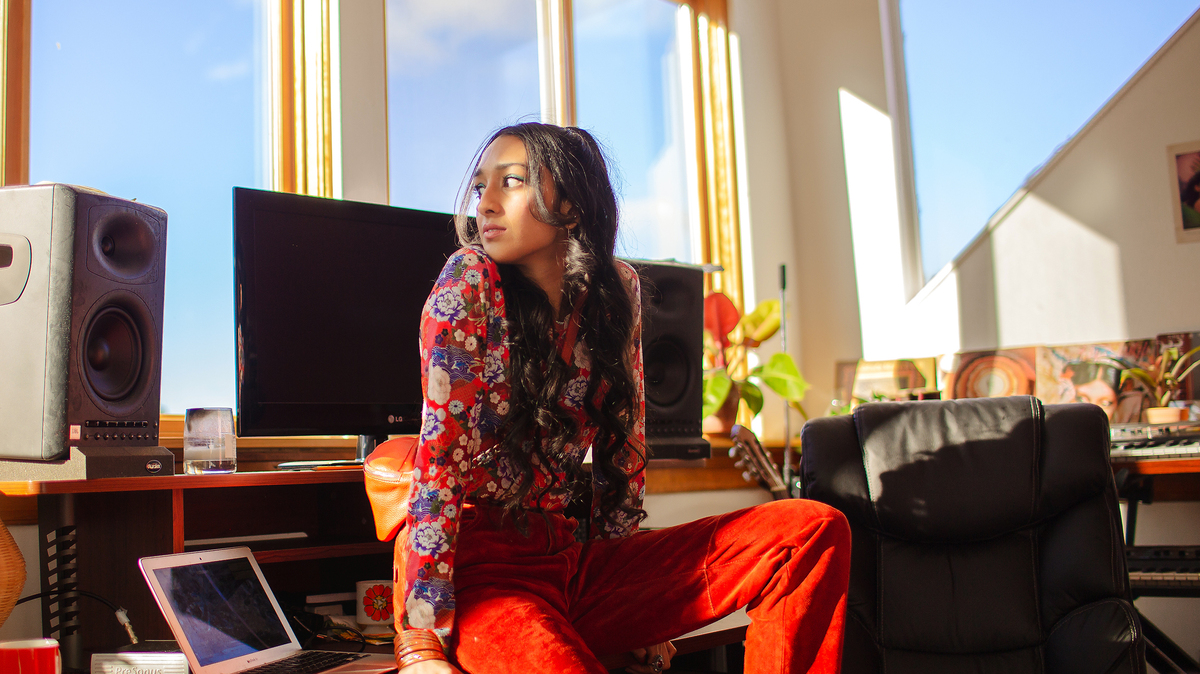 "I need to be involved in every step of the process," Raveena says. In addition to songwriting, the artist has directed many of her own videos and oversees the staging of her live shows.

"I need to be involved in every step of the process," she said, swiveling on the studio computer chair with her legs pretzeled. In addition to songwriting, she acts as her own creative director, decides her own set lists and staging, and has directed many of her own videos. Though she admits that approach can be exhausting, Raveena says it's what she has to do in order to strike the right balance of new narratives and her Indian roots. Mixing the two, she says, is her "life's work."

As part of that mission, she has consistently complemented her well-received singles with distinctive visuals — steeped in nature, femininity and the earnest drama of the Sadhana Shivdasani films that filled her earliest years. Even with a DIY quality, videos like "Sweet Time" and "Honey" play up the beauty of her heritage in a lush dream world.

"She pulls at all the strings," Nadya Agrawal says, "and I just want to stop and take it all in." Agrawal is the founder of Kajal Magazine, a publication for "the South Asian diaspora to raise their voices," and profiled Raveena as her buzz was beginning to build last year. "That's really useful at times, especially with the political landscape that we're living in."

Agrawal says what drew her to Raveena's music was the "tinsel-y escapism" she provides while still pushing conversations about representation in new directions. The video for Raveena's 2018 single "Temptation," for example, takes place in a '70s-style salon turned mystical Garden of Eden. It's the exact type of vibrant, opulent romanticism you'd see in a Bollywood blockbuster, except the plot being played out isn't a heteronormative cat-and-mouse game: Raveena used the song to come out to fans, and many family members, as bisexual.

"Growing up, South Asian culture and queer culture felt like oil and water. Something that just simply couldn't mix," Raveena said via Instagram when the video dropped. "I'm pretty sure I liked girls before I liked boys, but it took me until this year, in my 20s, to be able to verbalize and know in my heart that this is one of my truths. ... I hope that for lil brown girls in the future, their queerness will feel nothing short of completely, 100% mundane and normal."

Some pockets of Indian media are changing too — this past March, Vinod Chopra Films released its first feature film with an openly gay protagonist, Ek Ladki Ko Dekha Toh Aisa Laga (How I Felt When I Saw That Girl) — and conversations about gender and power dynamics have been washing over the country in even bigger ways.

Last October, around the same time I visited Raveena, politician M.J. Akbar resigned his position after being accused of sexual harassment by multiple women on social media. Akbar's case is one in a recent wave of high-profile accusations in India that also includes senior journalists, Bollywood actors and corporate executives — some of whom have hit back with defamation lawsuits. In January, women staged a 385-mile protest wall to renew their push for gender equality in the country.

Between making ginger tea and talking about The Good Place in her attic, Raveena explained that while Shanti introduced her to the audience as one type of artist, her new album is meant to go deeper, bottling the good and bad of a pivotal moment: "It's not all butterflies and self-love." Across 12 tracks, Lucid follows a breaking point in a relationship — from attraction and love to intense betrayal and, eventually, love again. "It goes from feeling foggy to gaining clarity on the other side."

Compared to Shanti, the songwriting on Lucid is more direct. "I could surely provide / Mother Earth in my thighs," she beckons early on "Nectar." By "Stronger," singing in a lower register, she addresses an abuser head on: "I know you love to see me broken / Live to see me confused, on my knees / Don't talk too soon, I ain't dead yet." By the album's ender, "Petal," she's renewed: "I am weightless / Under sunny sun."

For Raveena, this story is ultimately about the healing process, and not just her own. "It's about my traumatic experiences with a man, but it's also about things between women and men that have been allowed to exist for centuries that need to change," she says. 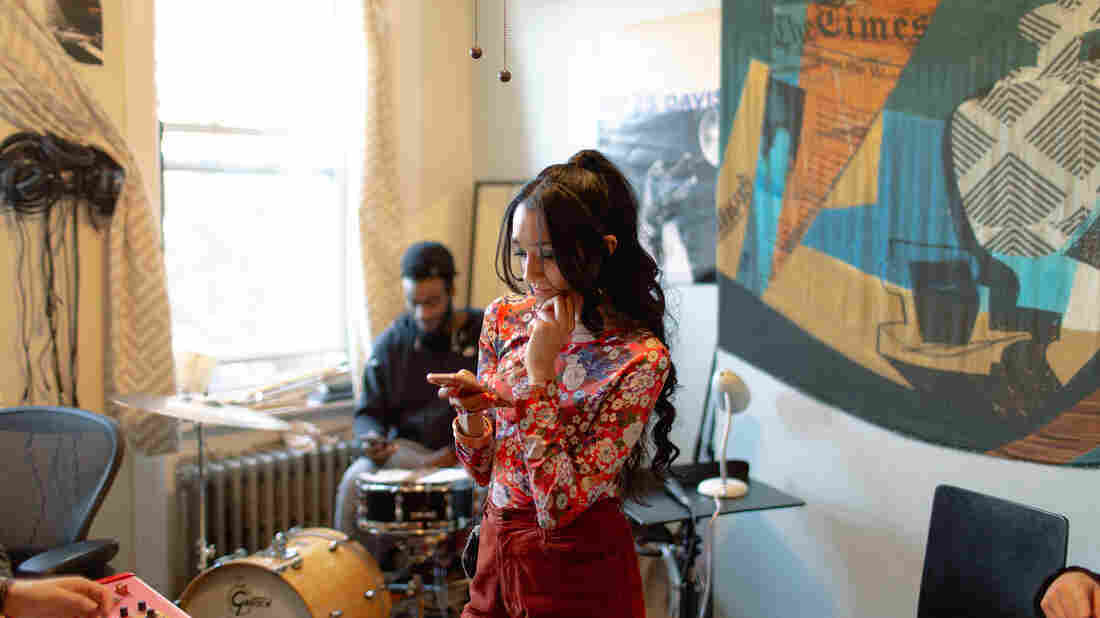 Raveena rehearses with drummer Tyler Newson and the rest of her band in Brooklyn, N.Y. Cameron Robert for NPR hide caption 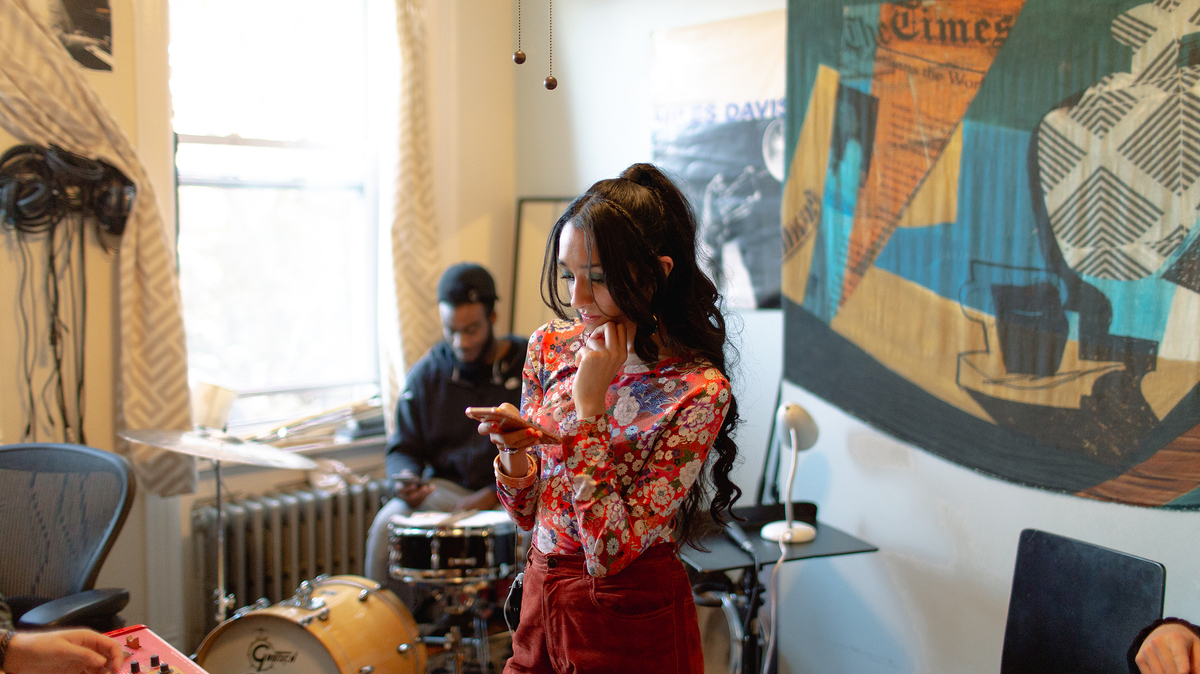 Raveena rehearses with drummer Tyler Newson and the rest of her band in Brooklyn, N.Y.

Raveena's candor and resilience are important given what she's up against. Even with exceptions like M.I.A., Zayn and the recently returned Jai Paul, South Asian stars are sparse in the American mainstream, and conversations about that ethnic identity often feel covert.

"In my generation, it was pretty tough," Asha Puthli says. One of Raveena's greatest inspirations, the Bombay-hailing jazz and disco diva spent much of the 1960s, '70s and '80s fusing popular genres with traditional Indian sounds. Her work has been sampled and interpolated by The Notorious B.I.G., Action Bronson and more — but even in her prime, crossing over for Puthli was a struggle.

"In 1969, CBS came to me and said 'We want to sign you,' but they wanted me to change my name," Puthli recalls. "I remember one of the honchos at CBS telling me, 'You're not black, you're not white, so we're going to find it very hard to market you.' " Of Raveena's career, she says, "I'm glad to see now you can bring your individual elements to the forefront and share your culture — not hide it."

"I think all people of color, all marginalized folks, are code-switching constantly," Agrawal says. "But with Raveena, it feels like she's purposely not." While Agrawal points out that Raveena is not the only South Asian artist to portray "touchpoints of our childhood" through an intersectional lens, the artist's success so far feels like a shared win — one that's elevating the art of everyone else from those communities.

"I love to see it being embraced by the mainstream audience and not just, you know, stuff that we share between us," she says. "It becomes validated in that way, because it's not just this thing that we're importing constantly from South Asia — it's a thing that we've taken and claimed, and now we're running with it."

"There's so much beauty in this culture that people don't realize," Raveena said that day in her studio before heading off to rehearsal. "But there's also a lot of stuff we never talk about. I just think there's room for more stories."

Lucid is out now via Moonstone Recordings LLC/EMPIRE.