Accessibility links
Judge Delays Ruling On 'Serious' Allegations Of Census Question Cover-Up A federal judge in New York says he is not planning to rule on the allegations until after the Supreme Court's likely decision this month on the fate of the census question. 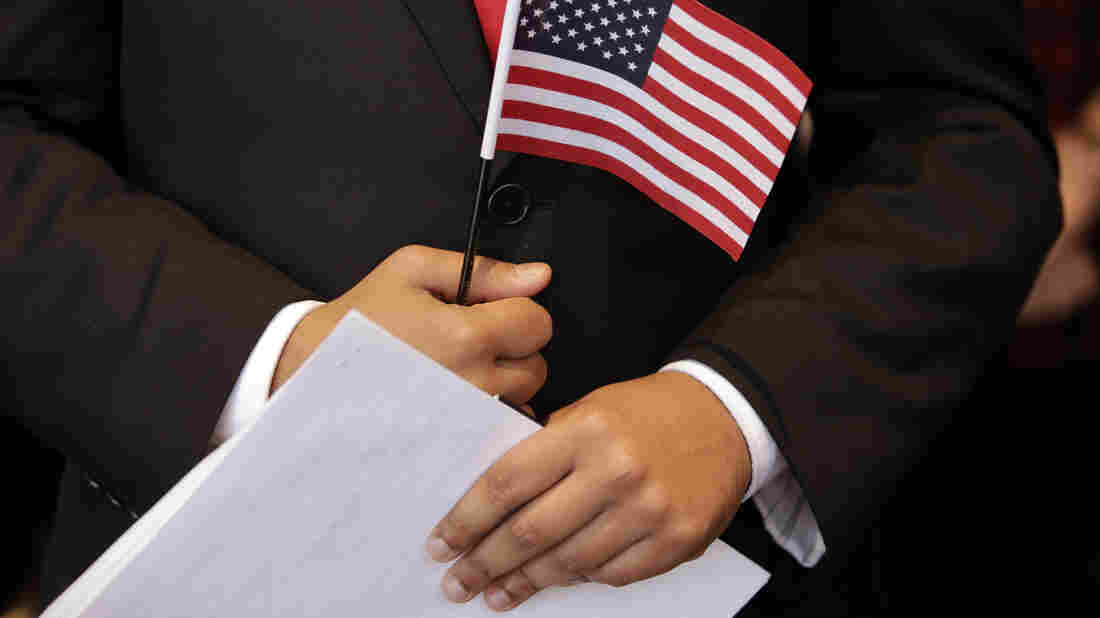 A newly sworn-in U.S. citizen holds a U.S. flag and documents during a naturalization ceremony in 2018 at the John F. Kennedy Presidential Library and Museum in Boston. Steven Senne/AP hide caption 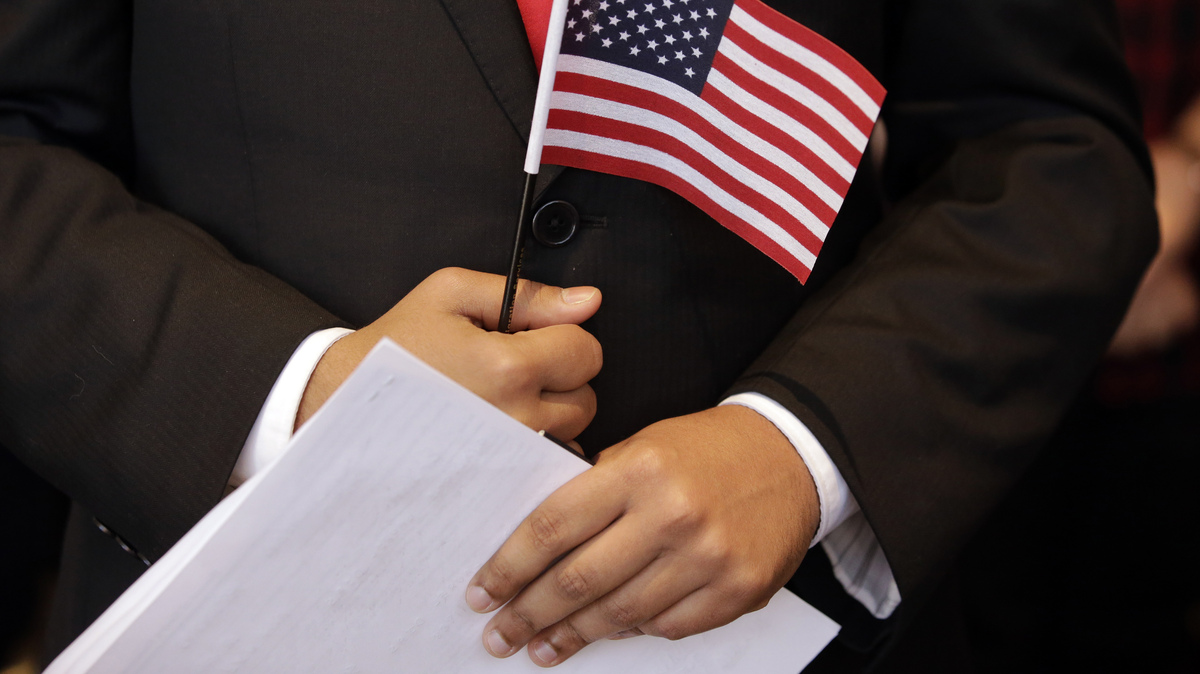 A newly sworn-in U.S. citizen holds a U.S. flag and documents during a naturalization ceremony in 2018 at the John F. Kennedy Presidential Library and Museum in Boston.

A federal judge in New York is delaying his review of allegations that the Trump administration concealed the real reason for adding a citizenship question to the 2020 census.

The move puts the focus back on the Supreme Court, which has been expected to issue its ruling on the legal fate of the hotly contested census question by the end of June.

During a brief hearing at Manhattan federal court Wednesday, U.S. District Judge Jesse Furman called the allegations by plaintiffs in one of the lawsuits over the question "serious."

He added he is "acutely mindful" that his earlier ruling to block plans for the question is currently before the Supreme Court and that he sees "no reason to rush this process" because the new allegations are "collateral" to the issues before the high court.

"The shadow" of allegations

Attorneys for both the Trump administration and the plaintiffs who brought the allegations agreed to a schedule that could run into early August.

With the Supreme Court's term currently set to end later this month, the justices could rule soon to allow the administration to include on forms for the upcoming national head count the question, "Is this person a citizen of the United States?" The court is under pressure to release a decision in time for the printing of paper forms for the 2020 census to start, as currently scheduled and budgeted for, by July 1.

Still, attorneys for the plaintiffs, led by the New York Immigration Coalition, say they are determined to push forward this summer with their claims that John Gore, a Justice Department official, and A. Mark Neuman — a former adviser to Commerce Secretary Wilbur Ross, who oversees the census — gave false or misleading testimony about the citizenship question's origins.

The Trump administration has said it wants the question so it can better protect the voting rights of racial minorities.

But the plaintiffs argue the administration orchestrated a cover-up of the real reason for the question — allegedly, to collect citizenship information that could be used to redraw voting districts in a way that favors Republicans and non-Hispanic white people. It was a plan outlined by a major Republican redistricting strategist, Thomas Hofeller, whose files were recently provided to the plaintiffs' attorneys from hard drives discovered by his estranged daughter after his death last year.

"Does the Supreme Court want to issue a ruling in the shadow of those kinds of allegations?" Dale Ho, a plaintiffs' attorney with the ACLU, asked after the hearing outside the courthouse. "That's a question not for us to answer, but for the court."

"We want to get the truth out," said John Freedman, another plaintiffs' attorney whose law firm, Arnold & Porter, obtained Hofeller's documents. "The Supreme Court, we think, no matter what it decides, will be interested in what the truth is."

In a court filing earlier this week, Justice Department attorneys pushed back against the allegations, writing that Hofeller did not play "any role whatsoever" in drafting the department's official letter to the Census Bureau requesting a citizenship question.

Neuman, who has denied the allegations against him and did not attend Wednesday's hearing, declined to comment to NPR on the proceedings.

"As we've said before, the plaintiffs' eleventh-hour attempt to derail the Supreme Court's resolution of this case has no merit," Justice Department spokesperson Kerri Kupec said in a written statement after Wednesday's hearing. "This baseless attack on the integrity of the Department and its employees is based on nothing more than fevered speculation and supposed 'new' evidence that, in reality, the plaintiffs have known for months."

That evidence includes an early draft of the administration's request for the question. It cites enforcement of the Voting Rights Act as a justification for requesting the citizenship question. As part of the lawsuits, Justice Department lawyers provided that document, among others, to the plaintiffs' attorneys in October. The plaintiffs' attorneys, however, say they only recently discovered that one section matches word for word a paragraph found among Hofeller's documents.

Wednesday's hearing, which lasted around 15 minutes, marked an unexpected return to Manhattan federal court for both sides' attorneys, who concluded a courtroom trial in November.

Close to five months after Furman issued the first ruling in the country to block the administration's plans to add the citizenship question to 2020 census forms — and more than a month after the Supreme Court heard oral arguments over that ruling in April — attorneys appeared before Furman again because of the surprise discovery of Hofeller's hard drives.

The revelations from Hofeller's files are complicating not only the two citizenship question lawsuits in New York but also other cases around the country.

In light of the documents, plaintiffs in two Maryland-based lawsuits asked U.S. District Judge George Hazel earlier this week to reconsider claims that he had ruled in April did not have enough supporting evidence. They include allegations that the question was intended to discriminate against immigrant communities of color and that there was a conspiracy among Trump administration officials to violate those communities' constitutional rights by adding the question.

On Wednesday, Hazel scheduled a hearing about the plaintiffs' request for June 18.