Accessibility links
Bernie Sanders Goes To Walmart Shareholders Meeting To Present Workers' Plan Bernie Sanders made a proposal on behalf of Walmart workers to the company's shareholders, another example of a tactic gaining steam this cycle: calling out big businesses on the campaign trail. 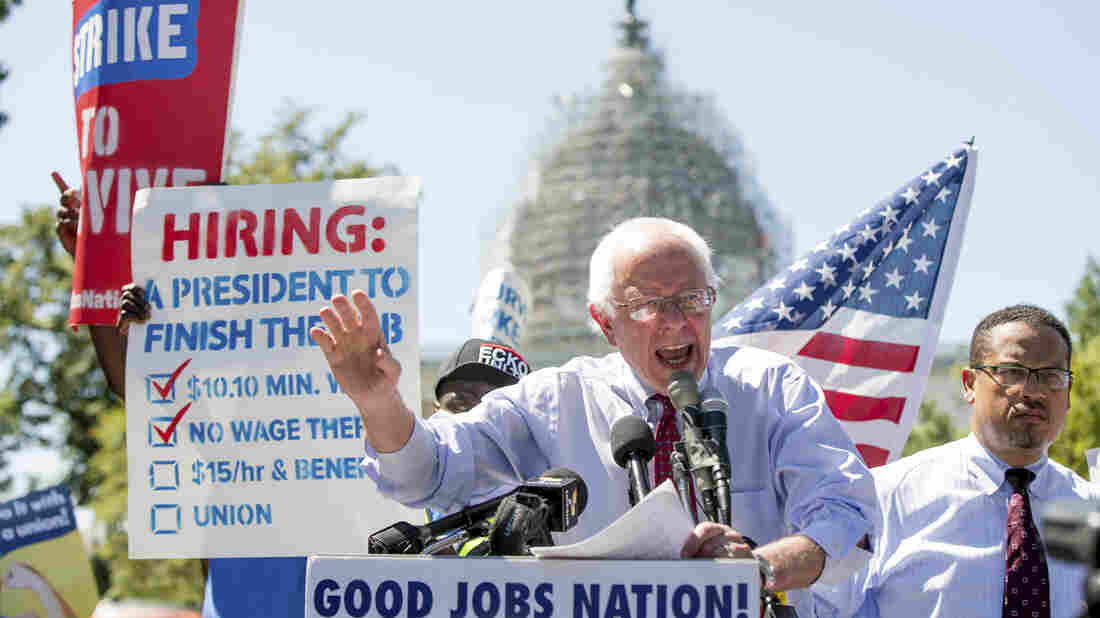 Democratic presidential candidate Sen. Bernie Sanders speaks during a 2015 rally to push for a raise to the minimum wage to $15 an hour. Andrew Harnik/AP hide caption 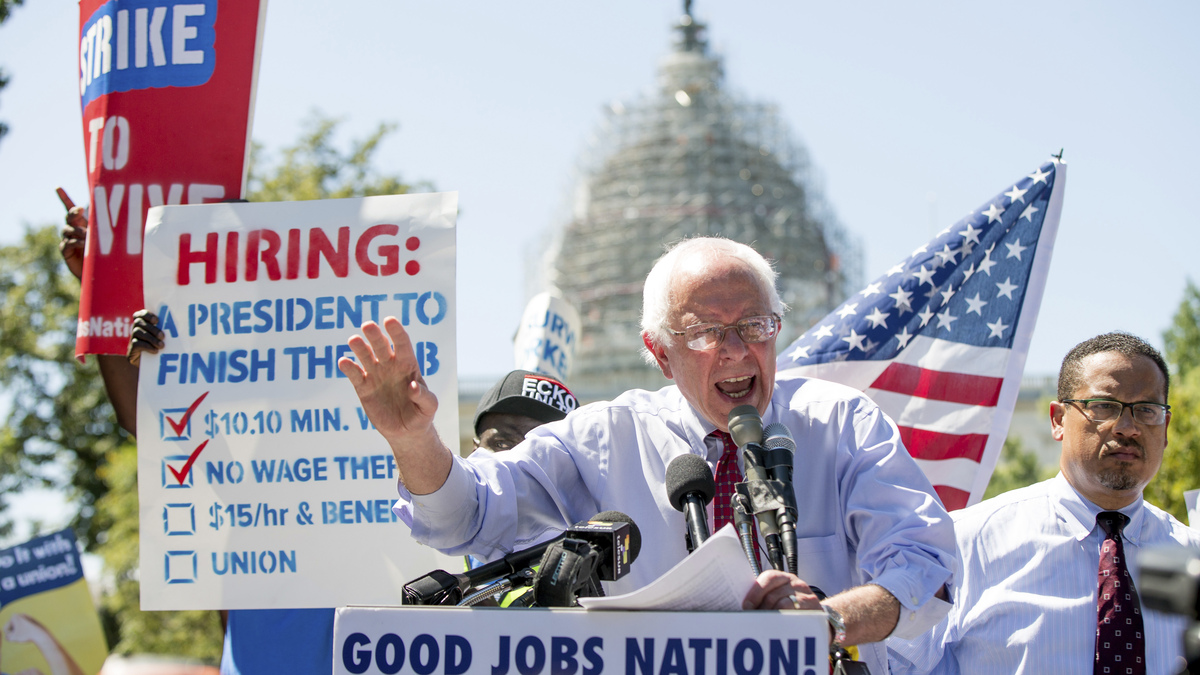 Democratic presidential candidate Sen. Bernie Sanders speaks during a 2015 rally to push for a raise to the minimum wage to $15 an hour.

Bernie Sanders didn't have his usual adoring crowds at his Wednesday campaign stop. That's because he spoke to Walmart shareholders at their annual meeting.

The Vermont senator and 2020 Democratic presidential candidate presented a proposal aimed at giving workers representation on the company's board, echoing a policy he is reportedly working on. (Elizabeth Warren has released a similar policy.)

In his remarks to shareholders, Sanders not only talked about board representation, but also said the company pays its workers too little, thereby forcing them to rely on government safety net programs.

"Frankly, the American people are sick and tired of subsidizing the greed of some of the largest and most profitable corporations in this country," he said.

It's not just Sanders. This is an example of a tactic that has gained traction in the 2020 presidential race: candidates calling out specific companies in their campaigning and their policies.

Sanders presented the resolution on behalf of Cat Davis, a Walmart worker and shareholder, and a leader of the group United for Respect, which aims to protect workers' rights at large corporations.

The proposal would require that the board include hourly associates on its lists of potential new members. The resolution is not expected to pass; voting results are expected Wednesday afternoon.

Sanders in 2018 already took aim at Walmart with the Stop WALMART Act — "WALMART" here standing for "Welfare for Any Large Monopoly Amassing Revenue from Taxpayers." That bill would have stopped large employers from undertaking stock buybacks unless they take particular steps to boost workers, like paying them at least $15 an hour.

He has introduced another bill with a pointed acronym, the Stop BEZOS Act (That is "Stop Bad Employers by Zeroing Out Subsidies") — a title aimed at Amazon CEO Jeff Bezos. That bill would tax large employers for the social safety net programs, like food stamps, that their workers use.

Technology firms have also come under scrutiny among candidates, as they are under scrutiny on Capitol Hill. Sen. Warren of Massachusetts in March released a plan to break up big tech companies, with the aim of allowing smaller companies to thrive. In her unveiling, she called out particular companies by name.

"My administration will make big, structural changes to the tech sector to promote more competition — including breaking up Amazon, Facebook, and Google," Warren wrote in a March Medium post. Since then, Sanders and Hawaii Rep. Tulsi Gabbard have voiced support for her plan.

Democratic candidates did take aim at corporations in the 2016 campaign — Bernie Sanders took aim at McDonald's for its wages. Both he and Hillary Clinton joined striking Verizon workers in 2016.

"We were always struggling with, 'How do you make policy tangible?' " said Amanda Renteria, political director for the 2016 Clinton campaign. "And that's a really easy way to do so. People know what Walmart is. People have a conception about it."

It's a tactic that relatively few major candidates have made central to their campaigns in recent years. But the willingness to aggressively call out big companies was arguably long in coming.

"I feel like the political moment we're in is really an outgrowth of really the worker militancy that started in 2012, 2013," said Joseph Geevarghese, executive director of Our Revolution, an advocacy group that grew out of Sanders' 2016 presidential run.

He's talking about walkouts among fast food workers and other low-wage workers that took place in those years (at the time, he was at worker-advocacy group Good Jobs Nation).

Those walkouts themselves had a variety of even older potential causes, he added – long-building inequality; a long, slow recovery from the Great Recession; and the subsequent Occupy Movement, for example.

But whatever the path, the culmination is a political atmosphere where anger is a dominant emotion — and something Trump, as well as liberal figures, has modeled.

"We have been in a populist moment over the last six, seven years," Geevarghese said. "I think Occupy, the strike wave, those are all symbols of that. But I also think Donald Trump is a symbol of the populist wave, at least when it comes to his willingness to go after companies like GM, companies like Carrier."

For her part, Renteria credits Sanders and Warren with having popularized tough anti-corporate rhetoric as a campaign strategy. But she also cautions that it might not work for everyone.

"For somebody like Elizabeth Warren, she has been in this space since the beginning of her career, and so for her it's just validating her brand," Renteria said.

That means calling out Amazon or Walmart seems authentic for candidates like Sanders, Warren and Trump. It might not have for a candidate like Clinton, and could be a stretch for other Democrats running in 2020.

"I think if other candidates were to take a look at this and go, 'Wow, I can do it too. It makes whatever policy I'm working on more concrete,' that could backfire," Renteria said.

In addition, there's the simple possibility that this kind of rhetoric could create powerful corporate enemies for a candidate at a time when unlimited money is pouring into the coffers of superPACs.

But then, an event like the Walmart shareholders' meeting does allow a candidate to have a media moment that an ordinary policy release might not create. And that's particularly important in a field of about two dozen candidates.

Walmart is one of NPR's financial sponsors.