Accessibility links
Review: 'Dark Phoenix' Brings A Classic Comics Saga To Life — And Death Thanks to a sure(ish) grip on Marvel's mutants-as-metaphor approach to storytelling, the film brings a classic comics storyline to life. Sure, it's melodramatic — but that's the X-Men for you.

'Dark Phoenix' Channels The Cosmic Power Of The Comics, Avoids Going Down In Flames

'Dark Phoenix' Channels The Cosmic Power Of The Comics, Avoids Going Down In Flames 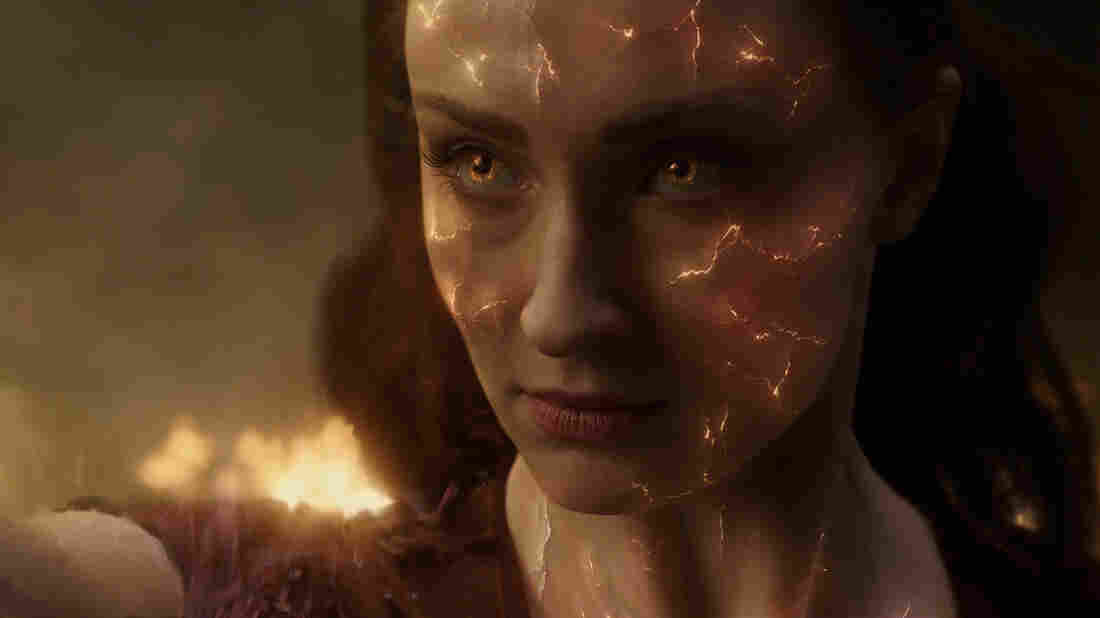 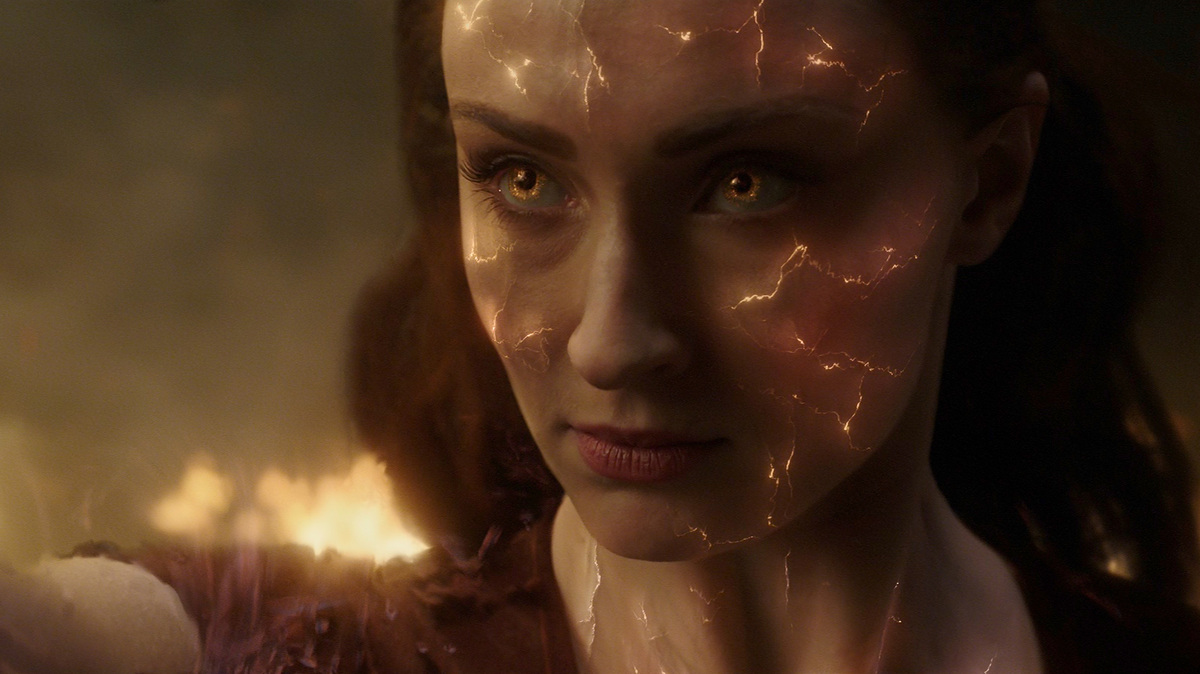 That's how the character of Jean Grey, powerful telekinetic telepath and charter member of the X-Men, reintroduced herself to her teammates in 1976's Uncanny X-Men #101, shortly after she was seemingly killed by a solar flare while on a space mission.

Everything about that moment was swoony, operatic, larger-than-life: the energy that wreathed her body without consuming it (later revealed to be a cosmic entity of immeasurable power bonded to Jean's body and mind); the way her long red hair billowed around her face as if the artist had caught her midway through her DryBar appointment; her eyes, now as disquietingly white as a Harold Bloom syllabus; the newly jagged shape of her word balloons (comics shorthand for "somethin's hinky here"); her new superhero outfit, a green jumpsuit replete with shiny gold thigh boots, shiny gold evening gloves and, most Marvel-ously, a shiny gold sash tied at, and hanging with a kind of kicky insouciance from, her hip.

And then there was that dialogue, of course. At once chewily grandiloquent ("HEAR ME, X-MEN!"), vaguely redundant ("life incarnate," really?), and also, in one important respect ("Now and FOREVER ... I AM PHOENIX!") factually wrong.

Because just 33 issues later, the character called Phoenix underwent a heel-turn, attacked her teammates, and announced a new, new moniker (being careful to do so in the third person, as villains are so dang wont to do).

"Ask not for pity from DARK PHOENIX ... There is none in her."

Why? Well, for one thing: that sash tho.

But sure, also it was full of angst and heartbreak and betrayals and tragedy and the kind of truly cosmic stakes that were still rare even for Marvel superhero comics (read: Dark Phoenix eats a sun — I'll repeat that for those in the back — homegirl EATS a damn SUN, wiping out a planet of 5 million beings in the process).

It was a time, in comics, when both characters and narrators had grown particularly chatty; Chris Claremont's word balloons and expository text so crowded John Byrne and Terry Austin's panels you often felt like you had to crane your neck to make out what the hell was going on.

Even so: The Dark Phoenix Saga held, and holds, a powerful grip on comics readers' hearts. It's been reprinted and revisited often, on and off the four-color page. (Makes sense that the character would keep coming back: She's called Phoenix, fer pity's sake, and superhero narratives would never leave a lily like that un-gilded.) The '90s animated X-Men series faithfully adapted her tragic tale, ensuring its narrative virus would invade a new generation of hosts. Brett Ratner's messy 2006 X-Men: The Last Stand watered it down to a thin, nearly unrecognizable gruel flecked across its 104-minute running time; in his hammy fists, what was once a stirring saga became hopelessly saggy.

X-Men properties work, to the extent they do, by adopting a mutants-as-metaphor approach to storytelling. Our heroes are outcasts, freaks, feared by "normal" humans, which tees them up quite tidily to serve as symbolic stand-ins for any Other you care to name. In the civil rights '60s, X-Men stories resonated most strongly as racial allegories. Director Bryan Singer brought out their queer subtext ("Have you tried ... not being a mutant?"), but the Dark Phoenix Saga was written in the era of the ERA and functions as a broad, unmissable feminist metaphor for the struggle of women to achieve and exert control over their own destinies.

It's not ... an unproblematic one, on the surface at least. I mean: It's about a woman who regularly loses control of herself and her emotions (geddit?), endangering the men and women (mostly men) around her. Also she's becoming even more powerful than her male teammates (gasp! horror!) so naturally she must be stopped, right? Turns out, the only thing that can keep her in check is the unfathomable love (unfathomable as in: very deep, and also as in: difficult to fathom) she feels for Her Man, an emo jock hiding behind his ruby-quartz Foster Grants.

But there's something else, something a bit deeper at work. Because the Dark Phoenix Saga ultimately revealed itself to be about Jean's realization that she'd been the victim of psychic manipulation by two men — the evil Mastermind (see above, re: on-the-nose naming conventions) and the well-intentioned Professor Xavier. We learn that Jean's power isn't a result of her "losing control" exactly — rather, it stems from her rejecting patriarchal attempts to assume control over her by these two men, who wish to channel her power for their own reasons. She rejects them, and gets some satisfyingly nasty revenge on Mastermind, while giving Professor X, Cyclops and the rest of the X-Men a kind of cosmic hit-the-bricks. (Technically, she sacrifices herself to protect them from the dark entity inside her, but we're talking overarching metaphor, here.)

In other words: It's quintessential X-Men.

Which brings us, finally, to the film Dark Phoenix. Appropriately enough, in a movie named for a bird that features largely in ancient myth, it's a swan song, of sorts. Barring the long-delayed New Mutants (currently slated for April of next year), Dark Phoenix would seem to be the film that turns out the lights and locks the doors on Twentieth Century Fox's corner of the Marvel universe. And what better way to do so than with a story full of hubris and tragedy and sundry finalities, big and small.

It's A Bird, It's A Plane ... It's Our Comics And Graphic Novels Reader Poll!

Remember how I said how the Dark Phoenix Saga in the comics (and to a lesser extent, the animated series), was marked by overwrought, gleefully melodramatic excess?

Dark Phoenix gets it half right. It's overwrought. It's melodramatic. And X-Men being X-Men, that's actually two marks in the win column.

But there's no swoony excess here, and certainly nothing gleeful. Dour Phoenix, more like.

As written and directed by Simon Kinberg, who's co-written and produced a few X-films before this, it feels sized down to the scale of the first prequel, X-Men: First Class. That's not a bad thing: That stylish little 2011 film gave the franchise a much-needed clean bill of health by cutting out the bloat of X-Men: Last Stand and introducing James McAvoy and Michael Fassbender as Charles "Professor X" Xavier and Erik "Magneto" Lehnsherr. McAvoy was charming, Fassbender wore a crisp white shirt and killed Nazis. Talk about gleeful.

But the bloat seeped back into the franchise gradually, and with Singer's disastrous, puzzling X-Men: Apocalypse, it threatened to kill the patient. Dark Phoenix — smartly, I think — keeps the cosmic action of the comics largely earthbound. Even smartly-er, it comes in at under two hours. We lose the saga's sweep and scope, and when it comes to Jean's ultimate culpability in this Dark Phoenix's (much much more modest) body count, the film cheats a bit — but then, so did the comics, after the fact.

Characters turn against one another in ways that the comics had ample time to lay plenty of track for, but that the film can't and doesn't. The dialogue is clunky, and at times it turns so deeply purple you expect it to break into "Smoke on the Water" — but hey, it's X-Men. The closest thing we get to a joke is a scene in which McAvoy gets to call up the surprising smarminess he brought to the Xavier character in First Class, as he soaks up the adulation of a grateful nation at an event in the White House.

Days of Future Past, as you may recall, featured an assured, innovative set-piece involving the speedster Quicksilver (Evan Peters) running around a room so fast it appeared the world had stopped around him. There's nothing that matches that bracing newness here, and in fact the only truly memorable set-piece occurs aboard a train at the film's climax. The special effects are so matter-of-factly mapped onto the world of the film that they soon cease to register as special — which is the goal, after all.

Nowadays we're inundated with films that teem with characters who hurl plasma bolts or unleash psychic blasts or channel magnetic waves or whatever. Teams of CGI professionals are tasked with animating those uncanny forces so convincingly we temporarily forget that these movies often just come down to two or more obscenely paid, classically trained actors standing stock-still in the middle of a soundstage while grimacing at each other.

(We do get some heroes battling other heroes on the streets of Manhattan, as any true-believin' Marvel fan expects and demands.)

The smartest and best thing about Dark Phoenix is its willingness to directly engage with, and update, the metaphorical work the original saga began; the film is much more clearly concerned with Jean's empowerment and triumph over patriarchal meddling. The stand-in for the evil Mastermind here (Jessica Chastain in an Edgar Winter wig) instead urges her to reject the roles imposed on her by men. Mystique (Jennifer Lawrence) repeatedly calls McAvoy's Xavier on the carpet for his motivations in general and his manipulation of Jean in particular.

They may be the only two distinct female voices in the movie, but they both happen to be exactly right. That's not nothing.

A film that exactingly reproduced the Dark Phoenix Saga of the comics would never have worked — it's impossible to collapse years of comics storytelling, especially the verbose, Byzantine comics storytelling of that particular era, into a two- or even three-hour movie. I understand that.

I understand, too, that Phoenix's garish comic-book costume, wildly impractical as it was, would never translate to film. (Gold evening gloves? Honey, are you challenging someone to arin'n haelar, the Shi'ar Duel of Honor That Cannot Be Refused, or are you headed to Studio 54?)

So I understand why the film instead fits our doughty heroes into matchy-matchy black leather jackets emblazoned with bright yellow X-s. It's practical, it's butch and it's way more functional than that jauntily tied but completely superfluous hip-sash.

I miss the hip-sash, though, and I always will. It would have been nice to leave this small, dark, weird corner of the Marvel Universe with an adaptation of a story beloved by millions of fans that managed to stick the dismount. But that's not what we get here.

If it's truly better to burn out than fade away, Dark Phoenix contents itself with the latter.