Accessibility links
Trump Delays Tariffs Against Mexico, Announces Migration Agreement Mexican officials have "agreed to take strong measures to stem the tide of Migration" as part of the agreement, the president tweeted on Friday. The tariffs were to begin on Monday. 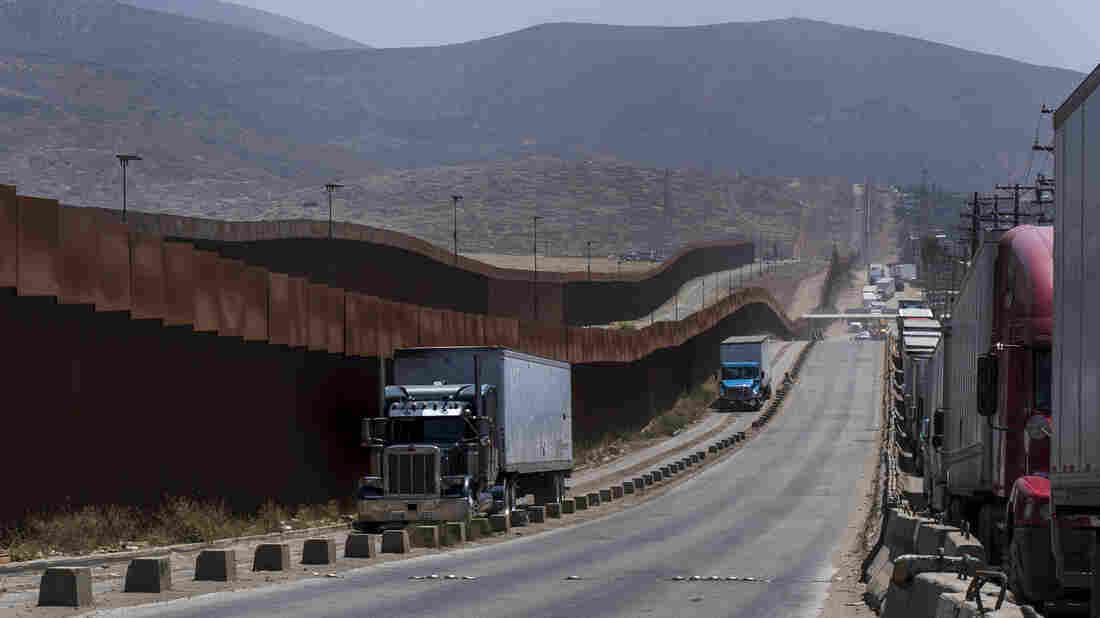 Trucks pass along a border wall as they get into position to cross into the United States at the border in Tijuana, Mexico, on Friday. Companies had been rushing to ship as many goods as possible out of Mexico to get ahead of possible tariffs threatened by President Trump. Hans-Maximo Musielik/AP hide caption 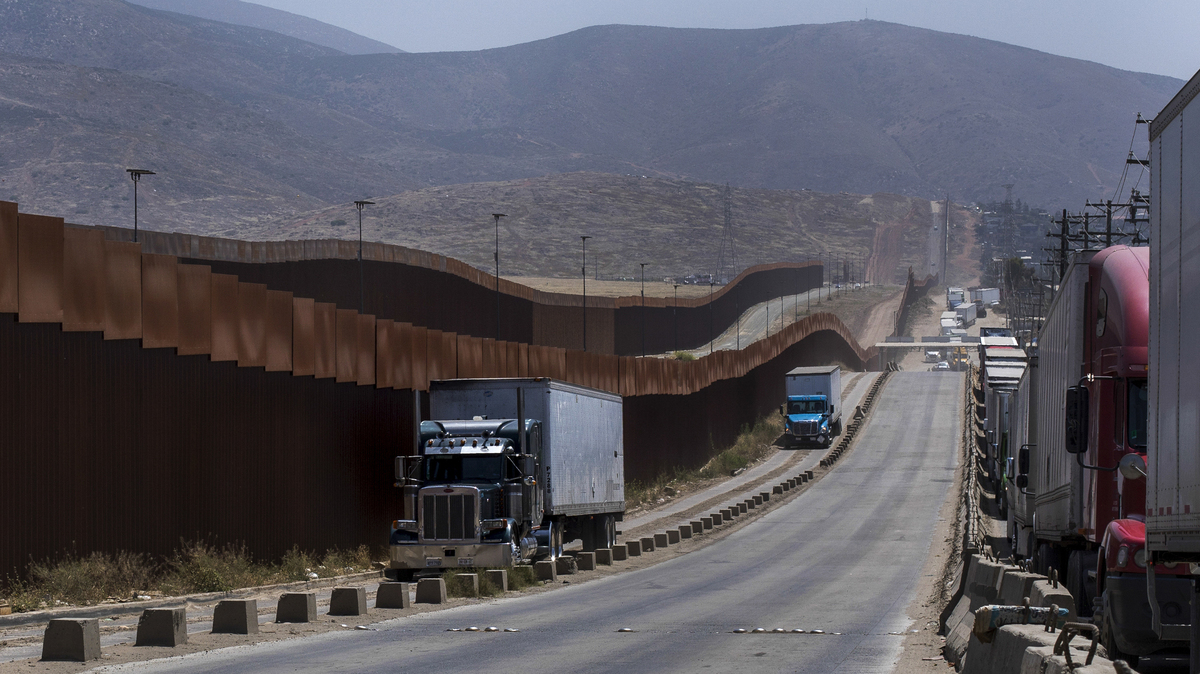 Trucks pass along a border wall as they get into position to cross into the United States at the border in Tijuana, Mexico, on Friday. Companies had been rushing to ship as many goods as possible out of Mexico to get ahead of possible tariffs threatened by President Trump.

A day after U.S. and Mexico officials announced an agreement to avert tariffs — set to begin on Monday — affecting billions of dollars in imports from Mexico, President Trump took a victory lap on Twitter.

Under a joint agreement released by State Department officials, Mexico will assist the United States in curbing migration across the border by deploying its national guard troops through the country, especially its southern border.

Mexican President Andrés Manuel López Obrador praised the accord, thanking "all Mexicans who made it possible to avoid the imposition of tariffs on Mexico products exported to the United States." He called for celebrations in Mexico on Saturday.

Secretary of State Mike Pompeo said the agreement will help the U.S. "stem the tide of illegal migration across our southern border and to make our border strong and secure."

Reactions among top Democrats were far from celebratory.

House Speaker Nancy Pelosi criticized Trump's negotiating tactics, which she described as "recklessly threatening to impose tariffs on our close friend and neighbor to the south."

Pelosi said in a statement on Saturday that the Trump administration's deal with Mexico violates the rights of asylum-seekers under federal law "and fails to address the root causes of Central American migration."

The agreement did not include a demand from the U.S. that Mexico agree to a "safe third country" designation, requiring the country to permanently accept most asylum seekers from Central America.

Trump announced on May 30 that he would impose a 5% tariff on all goods imported from Mexico beginning June 10 if Mexico did not take action to stop the flow of migrants from Central America into the U.S. After that, he said, the tariffs would go up an additional 5% each month until reaching 25% in October, unless the administration were satisfied with the Mexican government's efforts on immigration.

"If the illegal migration crisis is alleviated through effective actions taken by Mexico, to be determined in our sole discretion and judgment, the Tariffs will be removed," the president's statement said.

U.S. and Mexican officials continued the talks, as Mexico tried to reach an agreement to stop the tariffs from going into effect.

Officials meeting at the State Department focused on possible changes to asylum rules and whether Mexico could keep asylum-seekers in their country while their cases in the U.S. were adjudicated.

Mexico's foreign minister announced on Thursday that 6,000 national guard troops would be sent to the country's southern border with Guatemala. However, that force was recently established and has not gotten up and running, with estimates of full operations to be underway by 2021.

Earlier Friday, the president said there was "a good chance" the U.S. and Mexico could make a deal.

Border crossings have surged in recent months as Central American families have traveled to the U.S. seeking asylum.

More than 144,000 migrants were taken into custody after crossing the Southern border in May, according to data released by U.S. Customs and Border Protection on Wednesday.

Trump is facing rare pressure from congressional Republicans over his decision to link immigration policy to trade.

"There is not much support in my conference for tariffs," Senate Majority Leader Mitch McConnell, R-Ky., told reporters after White House lawyers met with GOP senators at their weekly luncheon on Tuesday.

Lawmakers have warned the tariffs could hurt U.S. businesses and force U.S. consumers to pay more for products imported from Mexico.

On Saturday morning, the president issued a flurry of jubilant tweets about the agreement that halted plans to impose new tariffs on America's largest trade partner.

"Everyone very excited about the new deal with Mexico!" Trump tweeted on Saturday. "Mexico will try very hard, and if they do that, this will be a very successful agreement for both the United States and Mexico!" the president wrote in another tweet.