Accessibility links
Congress Pushes Trump Administration To Lay Out Plan For Far-Right Extremism Lawmakers on Capitol Hill are pushing the federal government to detail its plans to fight white supremacy and other far-right extremism. Details are scarce, but here's what we know so far.

5 Takeaways About The Trump Administration's Response To Far-Right Extremism

5 Takeaways About The Trump Administration's Response To Far-Right Extremism 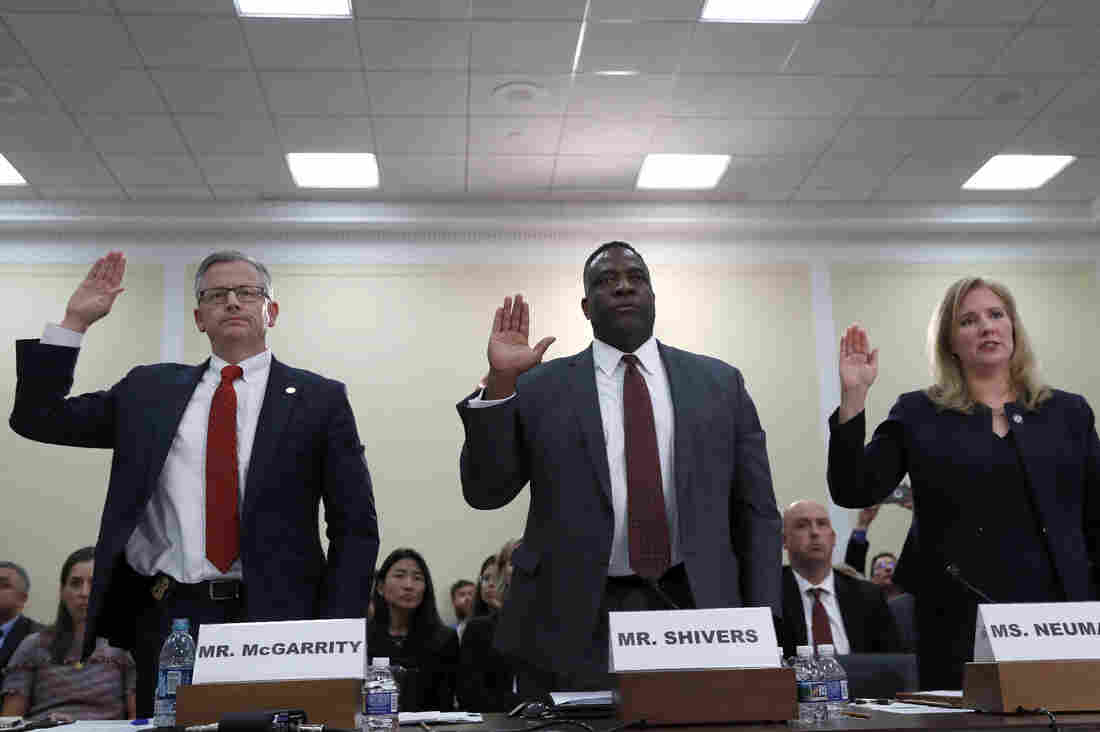 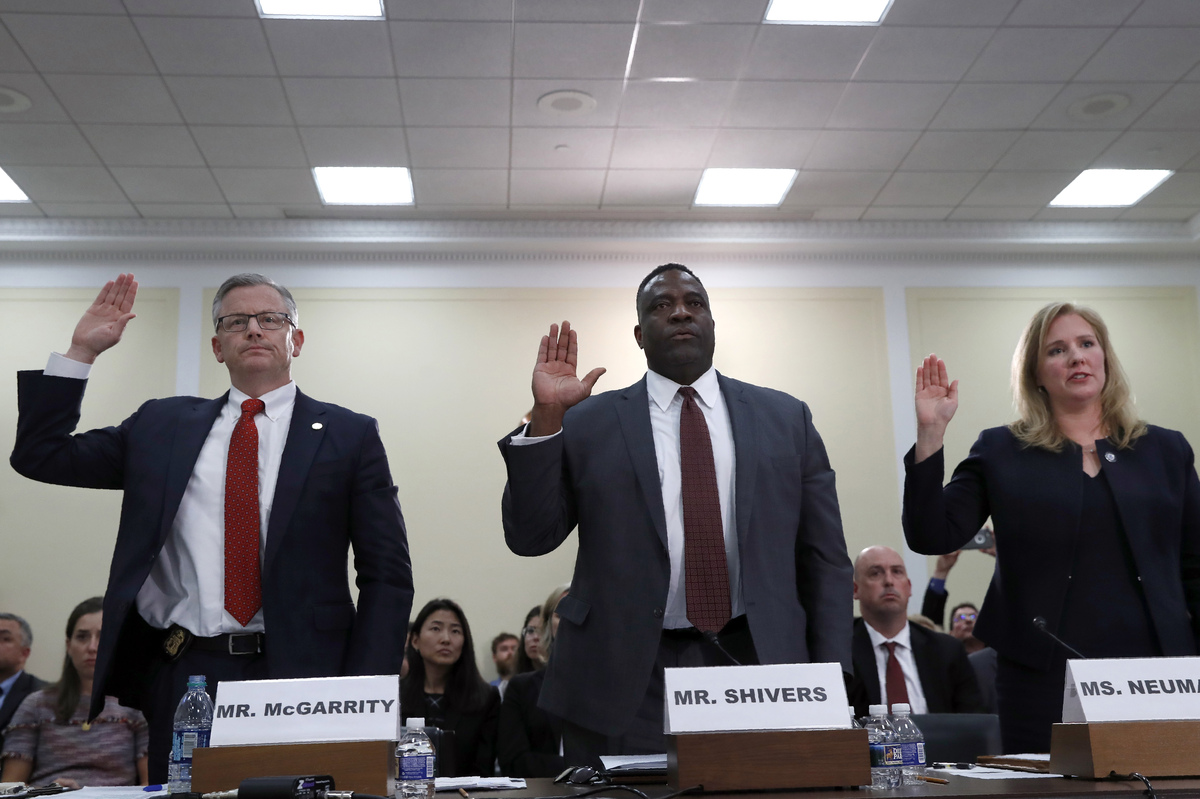 Lawmakers on the House Oversight Committee questioned senior FBI and Homeland Security officials this week about their response to white supremacist violence.

This was the latest in a series of hearings, led by Democrats, to gauge the Trump administration's commitment to fighting a threat that federal agencies deem the most lethal and active form of domestic extremism.

There were no bombshell revelations, but lawmakers did get a few details on some key questions.

There is no national policy to combat the far-right threat

Rep. Jamie Raskin, the Maryland Democrat who led the hearing, started by asking what he called the fundamental question: "Do we have an overall strategic plan to counter and prevent the threat of white supremacist violence? I fear the answer is no."

Raskin was right. After more than two hours of questioning, it was clear that, unlike the government's quick and sweeping response to Islamist militant groups, there's no comparable national strategy to fight white supremacist and other far-right movements.

Elizabeth Neumann, a senior threat prevention official at Homeland Security, told lawmakers that federal authorities were still adapting to the evolution of both far-right and Islamist extremists: They now self-radicalize online, with little or no direction from organized groups like al-Qaida, which had a clear hierarchy and staged attacks that took months or years to plan.

"Our post-9/11 prevention capabilities, as robust as they are, were not designed to deal with this type of threat," Neumann said.

She said Homeland Security was developing "a prevention framework" to be implemented in coming years, but she offered no details. Raskin, the lawmaker, said it was "very late in the game" to still be in the development stage of a national strategy, given the deadly far-right attacks in Charleston, S.C., Pittsburgh, Charlottesville, Va. and elsewhere.

Neumann said the delay is partly because "things haven't been institutionalized" through legislation, an executive order or a national security presidential memorandum focused on domestic terrorism. She noted that the Obama administration also lacked those tools.

President Donald Trump consistently downplays the threat of white nationalist extremism, which he's dismissed as "a small group of people."

Michael McGarrity, assistant director of the FBI's counterterrorism division, bristled when lawmakers suggested that, given the apparent disinterest from the top, federal authorities might not be taking the far-right threat seriously enough. McGarrity bluntly stated, more than once, that racially motivated violent extremists are the deadliest and most active of domestic terrorists.

"We're not playing with the numbers here," McGarrity said. "We arrest more domestic terrorism subjects [before they stage an] attack in the United States than we do international terrorism."

He said the FBI is using many of the same tactics historically used to thwart international groups like the Islamic State: working sources, staging undercover operations and asking courts to authorize wiretaps. McGarrity added that the FBI considers racially motivated extremists a transnational threat, and that the agency shares intelligence with counterterrorism partners overseas.

Homeland Security won't say much about its prevention effort

In 2015, Homeland Security opened a small office devoted to an approach known as "CVE," countering violent extremism. The idea is to use community partnerships and other tools to interrupt the radicalization process before it turns to violence. Critics call it ineffective, and say it leads to the stigmatization and surveillance of ordinary Muslims.

Under the Trump administration, the CVE-focused office lost about 90 percent of its old budget and about half its staff, and it's been renamed twice to signal a shift away from community partnership work. (Some Muslim activists joke that scrapping CVE was the only Trump administration move they supported.)

But it might be premature to declare the government's CVE program dead. Neumann said CVE-style prevention work will be part of a broad counterterrorism strategy that Homeland Security plans to have ready by this fall. But she gave few details about the program or what's going on with the restructured office that's supposed to handle it.

"There's still more questions than answers at this point," Raskin complained. "What are the office's precise functions? Who's in charge? How many personnel will be assigned to prevent white supremacy violence?"

Debate is heating up over a domestic terrorism law

If a U.S.-based suspect is accused of involvement with an international terrorist organization such as ISIS or al-Qaida, prosecutors have an array of charges to consider that aren't available for most cases involving white supremacist suspects.

Without a domestic terrorism statute, said McGarrity of the FBI, authorities are restricted as to how much they can police speech and conduct that's offensive, but protected under the First Amendment.

"The FBI does not investigate rallies or protests unless there's a credible belief that violent criminal activity may be occurring," he said.

In some quarters of Congress, support is building for a domestic terrorism statute, ostensibly to correct the double standard in extremist prosecutions. But several rights groups already have rejected the idea, arguing that enforcing existing laws is better than giving even more power to federal authorities.

This debate is one to watch in coming months.

It's official: Black Identity Extremism is no longer a thing

In the early months of the Trump administration, a leaked FBI report warned about a new kind of homegrown threat: black identity extremists.

The warning reportedly came after six unrelated attacks on police around the country; the FBI portrayed the threat as "an increase in premeditated, retaliatory lethal violence against law enforcement" by people with "perceptions of police brutality against African Americans."

The claim was widely endorsed by conservative news media outlets but viewed with equally widespread skepticism as a move reminiscent of the FBI's demonization of black activists in the civil rights era.

Rep. Ayanna Pressley, a Democrat from Massachusetts, asked McGarrity if there's a single killing the FBI could link to Black Lives Matter or similar activist groups. McGarrity's reply: "To my knowledge, right now, no."

Pressley continued her attack on "this absurd designation" until McGarrity divulged that the category had been retired at the FBI.

"It hasn't existed since I've been here for 17 months," McGarrity answered.

To recap: The FBI created a new category of threat and two years later quietly abandoned it without explanation.