Accessibility links
2019 Women's World Cup Preview: What You Need To Know The action kicks off today in Paris. The U.S. is once again ranked No. 1 in the world — but any number of teams could bring home the prize. Here's your essential guide to the tournament.

2019 Women's World Cup Preview: What You Need To Know

2019 Women's World Cup Preview: What You Need To Know 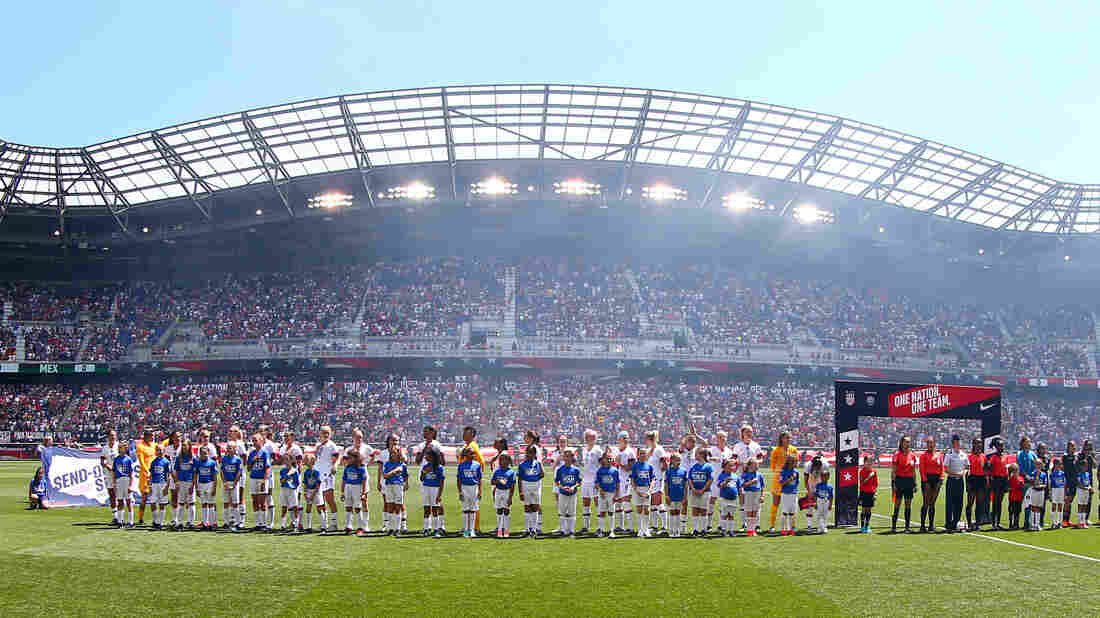 The U.S. women stand for the national anthem ahead of an international friendly with Mexico late last month before heading to France for the FIFA Women's World Cup, which kicks off today. Rich Graessle/Icon Sportswire via Getty Images hide caption 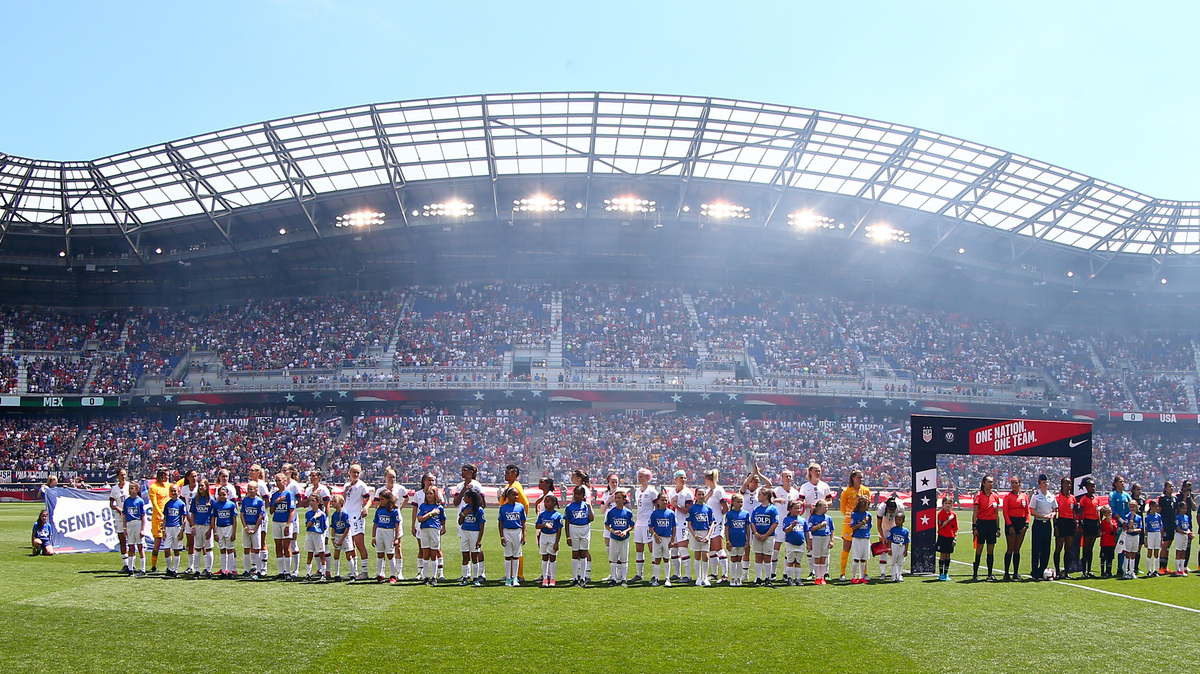 The U.S. women stand for the national anthem ahead of an international friendly with Mexico late last month before heading to France for the FIFA Women's World Cup, which kicks off today.

The 2019 FIFA Women's World Cup kicks off today in Paris. Twenty-four teams will vie for their chance at glory.

Here's what you need to know to follow all the action.

When does the Women's World Cup start?

The tournament begins at the Parc des Princes in Paris, where a strong team from host nation France takes on South Korea in the opening match. The schedule ramps up Saturday with three games: Germany vs. China, Spain vs. South Africa and Norway vs. Nigeria.

The U.S. plays its first match on Tuesday against Thailand, then plays Chile on June 16 and Sweden on June 20.

The whole schedule is here. The final is July 7.

The games will crisscross between nine French cities: Paris, Grenoble, Le Havre, Lyon, Montpellier, Nice, Reims, Rennes and Valenciennes. The semifinals and final will be in Lyon.

How can I watch it?

In the U.S., all the games will be broadcast on either Fox or Fox Sports, and streamed on the Fox Sports app. Video of each goal will be tweeted by the Fox Sports Twitter account.

Remind me what happened last time?

How could you forget? It was a rematch of the 2011 Women's World Cup, when the U.S. lost in heartbreaking fashion to Japan.

In 2015, the U.S. trounced Japan 5-2, including a hat trick by Carli Lloyd. Her third goal was an insane shot from the halfway line that sailed over the Japanese keeper and bounced into the net. The U.S. never looked back.

You should probably rewatch the game highlights right now.

Who's going to win this thing?

No one knows. Many predict this will be the most competitive Women's World Cup ever.

The U.S. is ranked No. 1 in the world and has a formidable array of attackers who should have no trouble scoring: Alex Morgan, Megan Rapinoe, Tobin Heath and Lloyd, among others. But defense could be a weakness, and the U.S. has sometimes struggled in the past against teams that bunker down and don't allow the U.S. to work its offensive magic.

Germany looks poised to make a deep run in the tournament, led by midfielder Dzsenifer Marozsán and forward Alexandra Popp. But coach Martina Voss-Tecklenburg was put in charge only late last year, and the team's prospects are still coming into focus.

England has a number of strong players, including attacker Fran Kirby and defensive star Lucy Bronze. Coached by former England player Phil Neville, England is a good bet to be among the last four teams standing.

Expectations for France are high, as the host country and after its men's team won last summer's World Cup. Watch for big moves by midfielder Amandine Henry and forwards Eugénie Le Sommer and Delphine Cascarino.

As for Brazil, superstar Marta suffered a thigh injury two weeks ago that might hamper the team's fortunes.

Any controversies to be aware of?

The big issue this year is pay inequity between the women's players and the men's.

Twenty-eight members of the U.S. team are suing U.S. Soccer for gender discrimination, arguing that they are paid less than members of the men's team though they perform substantially equal work.

While the U.S. women have been credited with leading a push for change, they're not the only ones voicing frustration and asking for parity.

This week, the union representing the Australian women's and men's players sent a letter to FIFA, alleging "discriminatory conduct" by the international governing body in awarding teams at the Women's World Cup just a fraction of prize money that the men's teams are given.

The best player in the world, Norwegian striker Ada Hegerberg, won't be playing for her home country. She says the Norwegian soccer federation hasn't done enough to support the women's game, and she now refuses to play for the national team. Norway instituted equal pay for its men's and women's teams in 2017, but Hegerberg says it's not just about equal pay, it's about respect — and so she won't be in the tournament.

Any great team nicknames I should know?

Many of the nicknames are variations on the men's teams: France is Les Bleues, Jamaica has the Reggae Girlz and England are the Three Lionesses.

The best nickname belongs to Australia: The Matildas. The Aussies took on the moniker in the 1990s, after the classic Australian bush ballad "Waltzing Matilda."

Speaking of Australia, keep an eye on star striker Sam Kerr. She's the all-time leading goalscorer in the U.S.-based National Women's Soccer League — and she does a backflip when she scores, which is often.

Who has the best uniforms?

France's two kits are both très chic: The home jersey is the classic blue with a golden crest. The away is white with blue dots, and socks in the same pattern. Vive les dots!

The U.S. kits, in crisp white and bold red, are meant to evoke the uniforms of the famous 1999 team that bested China in spectacular fashion. And the U.S. jerseys also have the finest detail of all: three stars above the crest, representing the three World Cups the Yanks have brought home.

Nigeria caused a stir with its lime-green zigzags at last summer's men's World Cup. This year, the women will also rock the zags, and they look at least as cool.

Are there any inspirational ads I should watch to get me hyped before the first whistle?

Second prize goes to Nike's 3-minute, globe-trotting ad that is about inspiring girls.

See you on the pitch.