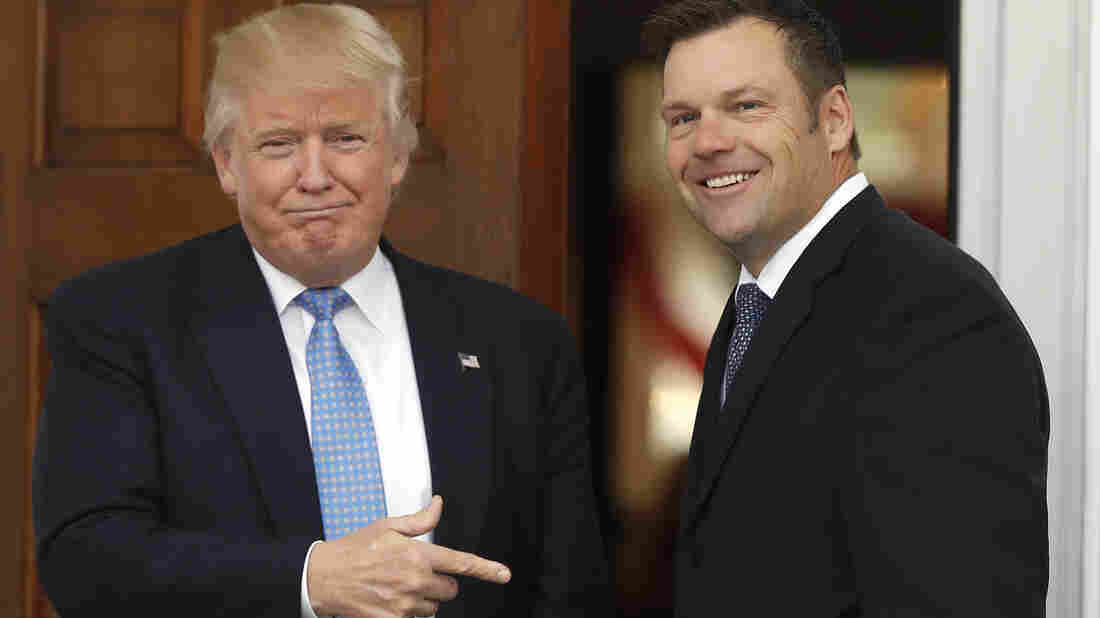 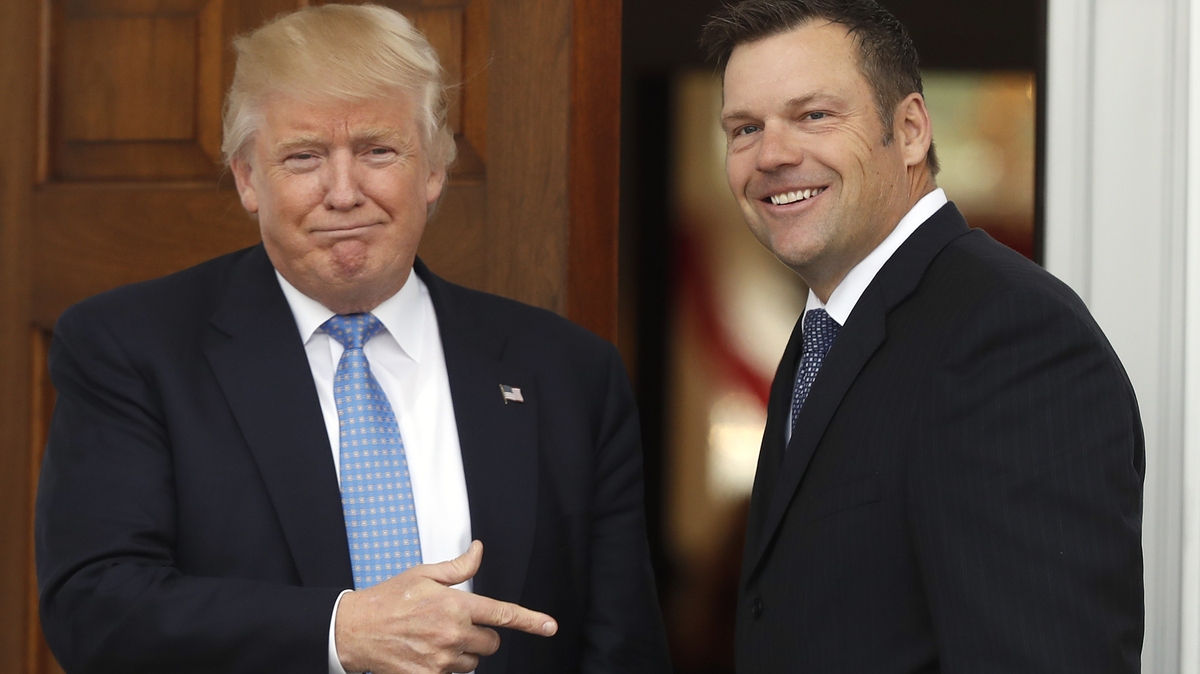 More than a year before the Trump administration formally asked the Census Bureau to add a citizenship question to the 2020 census, Kris Kobach discussed including the question with officials during President Trump's 2016 election campaign.

Kobach disclosed the latest insight into the behind-the-scenes discussions about the hotly contested census question during an interview earlier this week as part of a House Oversight and Reform Committee investigation into the question. Staffers for the committee's Democrats released transcript excerpts on Friday.

The revelation pushes the origins of the question within the administration back to as early as the last presidential race. Commerce Secretary Wilbur Ross, who oversees the Census Bureau and approved adding the question, previously testified to Congress that the Justice Department "initiated" the request for the question in December 2017. Ross later backtracked in a court filing, saying he began considering the question "soon after" he was appointed in February 2017, while noting that "other senior Administration officials had previously raised" the issue.

In his interview with House oversight committee staffers, Kobach also confirmed that shortly after the president's inauguration in January 2017, he met with Trump about the issue, as The Kansas City Star first reported. Kobach said he also discussed it with Steve Bannon, the former White House chief strategist and Reince Priebus, the president's former chief of staff.

The excerpts from Kobach's interview come as the House oversight committee prepares to vote on a resolution to hold Ross and U.S. Attorney General William Barr in contempt of Congress for not complying with subpoenas requesting the release of certain internal documents about the citizenship question.

By the end of the month, the Supreme Court is expected to announce a decision on whether the Trump administration can add the question, "Is this person a citizen of the United States?" to forms for next year's national head count.

Kobach and Bannon did not immediately respond to NPR's requests for comment, and neither did a spokesperson for the law firm where Priebus is currently employed.

More than two dozen states and cities, plus other groups, sued for the removal of the citizenship question, which Census Bureau research shows is highly likely to scare households with noncitizens from participating in the constitutionally mandated head count of every person living in the U.S. That could have major consequences on the once-a-decade census numbers used to guide the distribution of an estimated $880 billion a year in federal funding for schools, roads and other public services in local communities and to divide up congressional seats and Electoral College votes among the states.

The Trump administration has said it wants to include the question in order to collect responses that could be used to better protect the voting rights of racial minorities. But federal judges in New York, California and Maryland have rejected that explanation as the real reason for the administration's push. They issued rulings that currently block plans for the question, and the Supreme Court is reviewing the ruling out of New York.

Plaintiffs in one of the two New York-based lawsuits recently brought up allegations that newly uncovered files of a dead Republican redistricting strategist show the administration wants to use the question to draw new voting districts that benefit Republicans and non-Hispanic white people.

Kobach spelled out his reasoning for a citizenship question in a July 2017 email the Trump administration released last year as part of the lawsuits.

"It is essential that one simple question be added to the upcoming 2020 census," Kobach wrote to Ross.

Kobach explained to Ross how a citizenship question could be used to address "the problem that aliens who do not actually 'reside' in the United States are still counted" in census numbers used to reapportion seats in Congress. He went on to propose wording for a census question about U.S. citizenship status that would ask a noncitizen to identify as "a lawful permanent resident (green card holder)" or a "citizen of another country who is not a green card holder (for example holds a temporary visa or falls into another category of non-citizens)."

The wording of the citizenship question that Ross ultimately approved in March 2018 does not ask for a person's immigration status. But this week, Kobach told congressional investigator that he was "pretty sure" that Ross did not say "absolutely no" when presented with Kobach's version of a citizenship question.

"If he had said flatly no, I don't, whatever, you know, I think that's a bad idea, I probably would have remembered that," Kobach said.

The Commerce Department's Office of Public Affairs declined to comment on the record.

While testifying before Congress, Ross has emphasized that he ultimately rejected Kobach's suggestions.

"My only decision in response to Mr. Kobach's ideas was my complete rejection of his proposed citizenship question configuration and the purposes motivating his preferred configuration," Ross wrote in a footnote of a December 2018 letter to Rep. Elijah Cummings, a Democrat from Maryland who now chairs the House oversight committee. "I have always been and will always be committed to counting everyone once, only once, and in the right place."

Another internal email the administration provided for the lawsuits, however, shows that a Commerce Department official, whom Ross was pressuring to get a citizenship question on the census, was concerned about contacting Kobach directly after Ross mentioned him in a September 2017 meeting.

Blocked by the White House

Investigators with the House Oversight and Reform Committee attempted to gather additional details about Kobach's communication with the White House about the citizenship question issue. But in a memo released Friday, Democratic committee staffers say that the White House "interfered directly and aggressively" with the Kobach interview. Kobach had served as vice chair of President Trump's now-defunct commission on voter fraud beginning in May 2017, but the committee staffers say that he was a "private citizen" in the early months of the administration and during the presidential race.

The White House declined to comment for this story, but in a letter sent to Cummings in May, White House Deputy Counsel Michael Purpura said that Kobach's conversations with Trump and his senior advisers are "confidential" in order to allow officials to express themselves freely when shaping policies and making decisions.

"These aggressive efforts by the White House to block Mr. Kobach from cooperating with the Committee raise significant new questions about what the Trump Administration is concealing—and why," Cummings said in a written statement. "They also cast doubt on the Trump Administration's claims that the decision to add the citizenship question was 'made at the department level' rather than at the White House."

"Kris Kobach's testimony shows that he was a peripheral and inconsequential player in the decision-making process and that the Department of Commerce did not rely on Kobach in making its decision," Charli Huddleston, a spokesperson for the Republican committee members, said in a written statement.

A previous version of this story incorrectly stated that plaintiffs in one of the lawsuits over the citizenship question allege that the Trump administration wants to use the question to draw new voting districts that benefit non-white Hispanic people. In fact, the plaintiffs allege the strategy is to benefit non-Hispanic white people.