Accessibility links
NPR Review: 'Mostly Dead Things,' By Kristin Arnett Kristin Arnett's new novel follows a woman dealing with the suicide of her father, while running the taxidermy business she inherited from him, getting over an ex, and learning to live for herself. 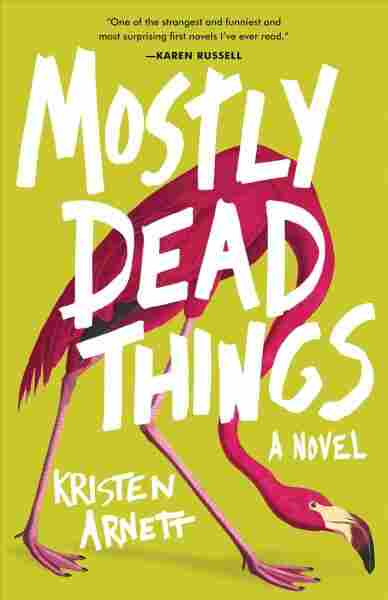 When I try to recall what mourning feels like — the immediate aftermath of a death, I mean, the days and weeks, and months that follow — I can only grasp the edges of memories. Grief can be a kind of deadening, a latching onto the past in order to fill in the gaps left by the person who has died or exited our lives. Yet life goes on, no matter how absent from it a mourner may feel. It's in this precarious emotional space that Kristen Arnett's debut novel, Mostly Dead Things, is set. But lest you cringe at what sounds like a difficult read, this isn't a depressing book: it's darkly funny, both macabre and irreverent, and its narrator is so real that every time I stopped reading the book, I felt a tiny pull at the back of my mind, as if I'd left a good friend in the middle of a conversation.

Jessa-Lynn, called Jessa by most, is a Floridian taxidermist in her 30s whose father has recently died by suicide. Jessa found his body in the shop she works at every day, passed down to her from him, and originally from his own father. Taxidermy is, fittingly, a legacy job in this family, and what an apt metaphor that is: Just as Jessa learned how to clean, skin, position, and mount dead animals to look forever — if rigidly — lifelike, she has also tried to shape and understand her own past as a singular, unchanging narrative that can remain fixed in place, accessible whenever she needs it, even if it, too, is dead.

Her past is complicated, of course, because all pasts are, and Jessa doles it out to us in dribs and drabs, alternating between present day chapters and memories of her father, her brother Milo, and her first love, Brynn. Her mother, Libby, appears in these memories occasionally, but often as a side character who is nothing but a mom, cooking and cleaning and tinkering with her cute little crafts at home. Jessa's simplistic, childlike view of her mom — inspired somewhat by her father, who liked to keep his wife separate from his work, where he mentored Jessa — is the reason she is so horrified at the book's inciting incident, in which Libby has put on display several of the shop's animals arranged in a rather lewd cross-species lovemaking scene. While Jessa is disgusted, not to mention angry, she's not really one to talk. When she first meets Lucinda, a gallery owner who recognizes Libby's arrangement as the artwork it intends to be, Jessa considers her allure and imagines her affixed to a branch like a taxidermied lioness:

Sometimes I hated the way I was. That I could look at an incredibly lovely woman and picture her mounted like a dead animal made me wonder what was wrong with my brain.

It's less Jessa's brain, really, than the hazards of her profession. One of the best things about the book is its description not only of the work involved in taxidermy but in its ability to render that work beautiful and loving, an art all its own.

... its narrator is so real that every time I stopped reading the book, I felt a tiny pull at the back of my mind, as if I'd left a good friend in the middle of a conversation.

The plot, such as it is, works towards Libby's exhibition at Lucinda's gallery and Jessa's fighting it tooth and nail every step of the way. But this is secondary, really, to the oft-denied emotional turmoil Jessa is still going through in the wake not only of her father's suicide, but of her first love Brynn leaving. Remnants of Brynn are everywhere for Jessa, who despite being closed off and cynical much of the time, is also a romantic in her own way: "Every place that used to feel comfortable to me just felt filled with Brynn. Every place in town held a memory. The movie theater where she'd barfed Sno-Caps. A gas station parking lot where we'd gotten strangers to buy us lime-flavored wine cooler. There was no escape." But it isn't only physical spaces that Brynn the world: Her presence is also felt in Milo, who was her husband — yes, while she and Jessa were also still involved; this family doesn't like talking about such uncomfortable truths — as well as in the two children she left behind, who are ignorant of what their aunt and mother shared.

It takes a while for Jessa to stop spinning her wheels and get out of the various ruts she's let herself sink into — drinking to excess every night, working through a hangover every morning, pushing away even a woman who is signaling with all her might that she is yearning to get away from her own situation and be with Jessa — but she does, and the journey there is as satisfying as any queer, boozy, sexy growing up story can be. Because while Jessa is an adult, there is something about the death of a parent — especially in a family that has always had two of them, together — that forces people to grow up again, in a whole new way. And rather than stuffing herself full of cotton wool and copper wiring, rather than mounting herself forever on a sofa in front of a TV with a beer in her hand, Jessa does that scariest of things: She lives.