Accessibility links
NPR Review: 'Magic For Liars,' By Sarah Gailey Sarah Gailey's new novel centers on estranged sisters, one magically talented and one just a talented private investigator — who gets called in to solve a crime at her sister's school for magic.

'Magic For Liars' Asks, What If You're Actually Not Magic?

'Magic For Liars' Asks, What If You're Actually Not Magic? 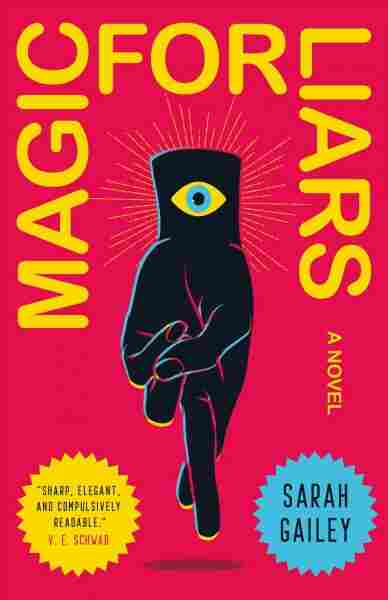 You are not the chosen one. You don't get to leave your humdrum life behind and go to the mysterious school where they teach magic. You will not discover powers you never dreamed you had. The reason you don't fit in socially is not because you're a once-in-a-generation sorcerer. Your blemishes and aches and colds and unfulfilled longings will not miraculously fade away as you become the marvelous creature you were always meant to be. You are not magic.

But your twin sister is.

Ivy Gamble, PI, protagonist of Sarah Gailey's Magic For Liars, has lived with disappointment for years. She wasn't the chosen one — single and solitary in her 40s, she couldn't be less chosen if she tried. But she's smart and damn good at her job, and she keeps going. Until one day, she's called into the magicians' school — Osthorne Academy, where her brilliant sister is now a faculty member — to investigate a case no magician can crack.

Sarah Gailey's premise had me intrigued from the start, and though it took me a while to warm up to Ivy as a narrator, I found her worth the wait. Sure, she's bitter and thorny, but Ivy has the mordantly hilarious humor of a woman who lives by her wits, as well as a private investigator's talent for observation and for drawing people out. Gailey lets us see Ivy's uncertainty as she uses the skills she's spent her years building; we feel her fierce joy when she succeeds in uncovering pieces of the puzzle, and her frustration when she knows something vital eludes her. "There was something dark there," Ivy muses while interviewing a student, "a big shadow under the surface of the water, and I needed to see if it was a log or a crocodile."

Ivy has the mordantly hilarious humor of a woman who lives by her wits, as well as a private investigator's talent for observation and for drawing people out.

I think Ivy succeeds as a protagonist because, like so many women, she's a talented person who feels like a failure because she isn't extraordinary. Then she's unexpectedly introduced into the world she was denied, and finds that it too has its ordinariness. Osthorne Academy For Young Mages has worn linoleum in the hallways and graffiti on the dented lockers; it has overworked administrators and teachers with the sort of geeky charm, jaded resignation and petty grudges that anyone who's spent time around academics will recognize. Then there are the students — one of whom just might be the Chosen One (capitalized this time for maximum drama).

Here Gailey faces the fantasy author's challenge of letting the reader know how magic works in their world. They sidestep it neatly: Ivy doesn't understand it, so we don't either. Gailey avoids long explanations by having Ivy pretend, for the moment, to be the magician she never was — so she, and we, rely on what students and teachers let slip. Tabitha's field, Theoretical Magic is, we are told, "like sticking your hand into a black box that may or may not have cobras in it ... And Tabitha, well. She lives in the black box."

As we read, we find that magic has limits; that it can be dangerous; that it can't fix everything, even your relationship with your long-estranged sister. Nor can magic help a student escape being bullied, getting ogled by a creepy teacher or getting pregnant. (Although it does come in handy if you wish to fill the school hallway with clouds shaped like male genitalia.)

You'll have gathered by now that this isn't ... that other magical school with which every author writing about magic in this century must contend. Ivy and the people she meets exist firmly in the now. They get mugged, drink too much, swear when they need to, and deal with everyday misogyny and racism. The world has little mercy; but it does have heart, and like Ivy, it carries on despite its scars.

I don't know whether Magic For Liars works as a crime novel; Ivy is believable as a sharp investigator, but the narrative may hand her a few too many gifts. I think it does work as an emotional story that contains magic: a tale of two sisters, each at her own turning point, heading unavoidably towards collision. The worldbuilding is solid and done with care. I do have a few reservations: The principal love interest is perhaps a little too wonderful a person, and the only specifically African American character on the staff — the formidable Mrs. Webb — is a source of scalpel-sharp insight and unexpected power, whose portrayal skates perilously close to magical stereotype.

Ultimately, though, Magic For Liars is a good read. When any of us reads a story about magic, we're always on the outside looking in, no matter how magical we wish we were. It's refreshing to find a story in which the narrator is stuck out here with us.

Liza Graham is a mezzo-soprano, writer, translator and Shakespearean text coach, born in Washington, D.C., and living in London.