Accessibility links
Cash Is Still King For Many In Germany Average citizens in Germany carry more than 100 euros on them, significantly more than most of their European neighbors, and they keep big stashes at home.

For Many Germans, Cash Is Still King

For Many Germans, Cash Is Still King 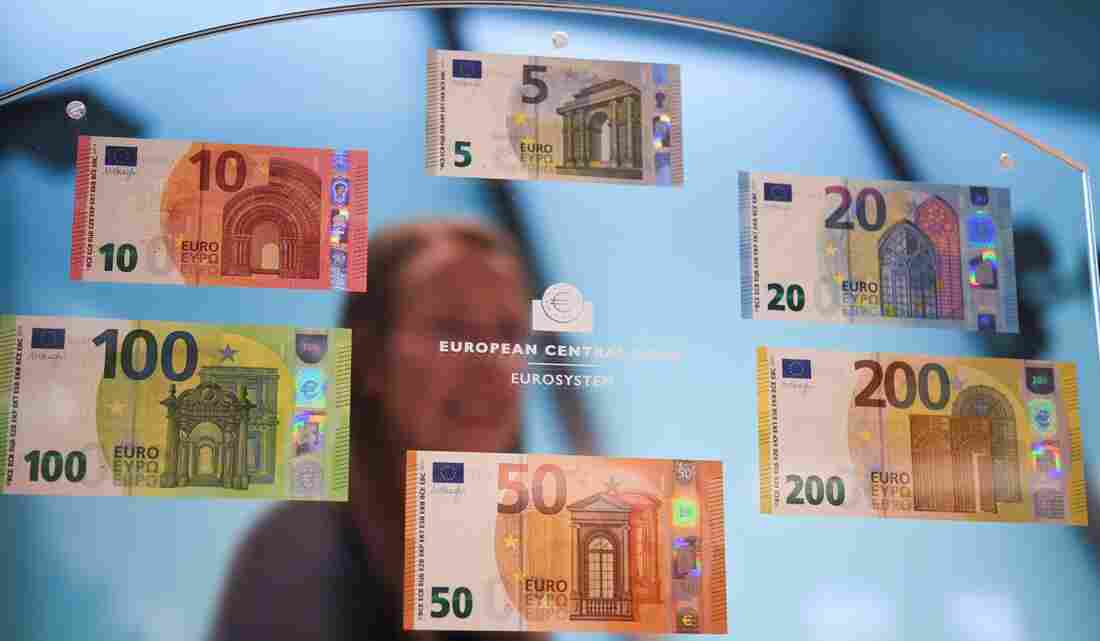 Many Germans say cash is quick and easy to use and keeps transactions more private. Arne Dedert/AFP/Getty Images hide caption 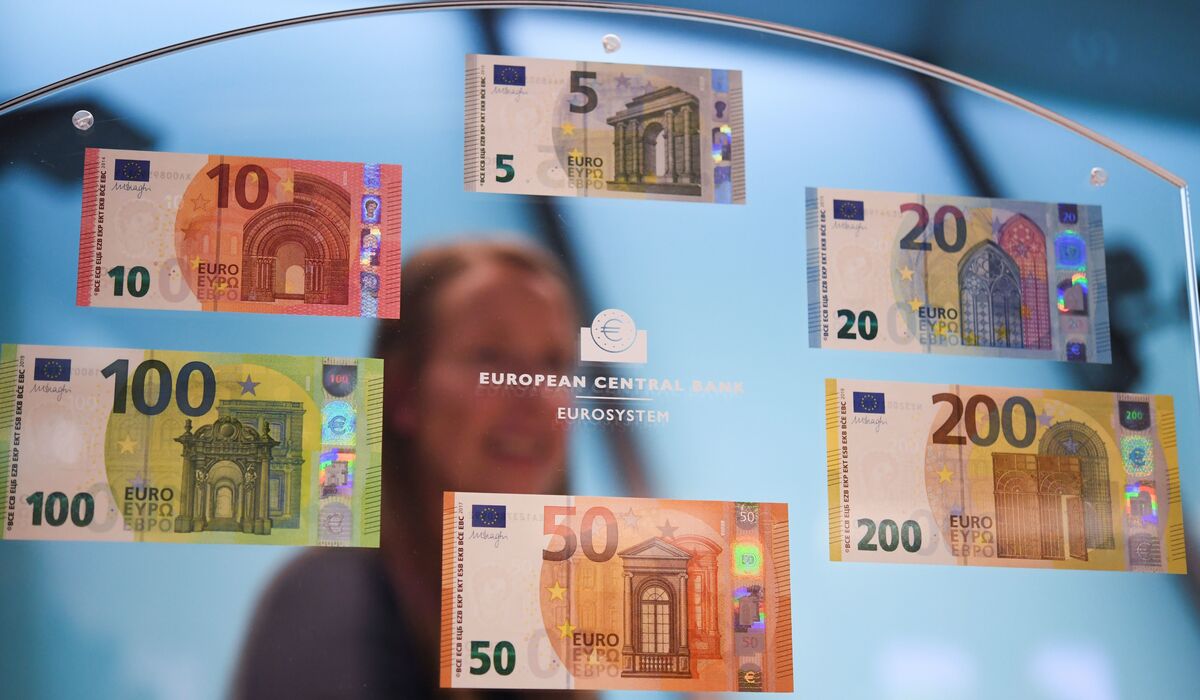 Many Germans say cash is quick and easy to use and keeps transactions more private.

"Cash is king" is an age-old saying. For much of Germany, however, the phrase is still up to date.

When in Berlin, do not count on getting around easily with just a credit card. "Cash Only" signs hang on front doors of shops and restaurants across the city.

This may be surprising to some. After all, Germany is Europe's leading economy and famous for technological know-how. But, even while some of its neighbors in Europe and elsewhere are quickly swapping physical money for new pay technologies, many Germans prefer their euro bills. Cash is quick and easy to use, they argue. It provides a clear picture of personal spending, keeps transactions more private and is widely accepted in the country.

"I usually pay cash. This way I have the feeling of keeping track of the money I spend," says Madeleine Petry, 29, as she shops at a supermarket in Berlin. "Sometimes when I couldn't make it to the ATM, I use my debit card in the store, but I never use my credit card for shopping in the real world — just for online shopping."

She is not the only one with this mindset.

A 2017 study by the country's central bank, Deutsche Bundesbank, said Germans carried an average of 107 euros (over $115 at the 2017 exchange rate) in their wallet. That's more than three times what the average French person carries (32 euros), according to the European Central Bank. It is also far more than what Americans carry. Three-quarters of respondents in a U.S. Bank survey said they carried less than $50 — and one-quarter said they keep $10 or less in their wallet.

That's not to say that Germans rule out other modern payment methods. In 2018, for the first time, Germans used plastic for payments more than bills. According to a report by the EHI Retail Institute in Cologne, 48.6% of sales took place with a debit or credit card, compared with 48.3% in cash.

Still, Germany has one of the highest rates of cash use in the European Union. "The most important reasons for the intimate relationship of Germans to cash are their needs for protection of personal data, security and confidentiality of payments and for simple, universal usability," says Doris Neuberger, head of the money and credit department at Germany's University of Rostock.

Since the common currency was introduced in 2002, the Bundesbank has issued more euros than the bloc's other members combined, according to a Bloomberg report.

As of the end of March, Germany's central bank had issued 692 billion euros in banknotes. "Approximately a third of this number remains in Germany, whereas only 10% are used in everyday transactions, 20% goes into domestic hoarding and an estimated 70% are used outside Germany," explains a spokesperson of the Deutsche Bundesbank.

Hoarding cash at home is another national specialty. 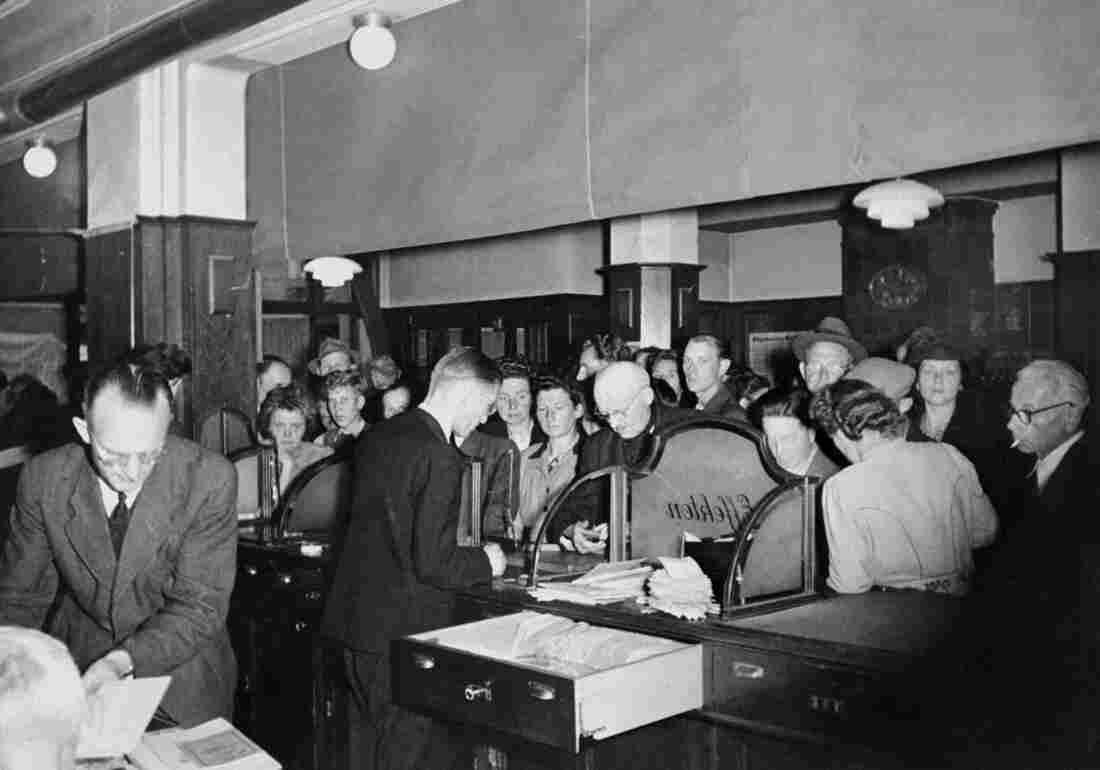 Germans wait to change their pre-World War II currency, the reichsmark, into deutschemarks, which were introduced in 1948 in western Germany. The deutschemark was later replaced by the euro. STF/AFP/Getty Images hide caption 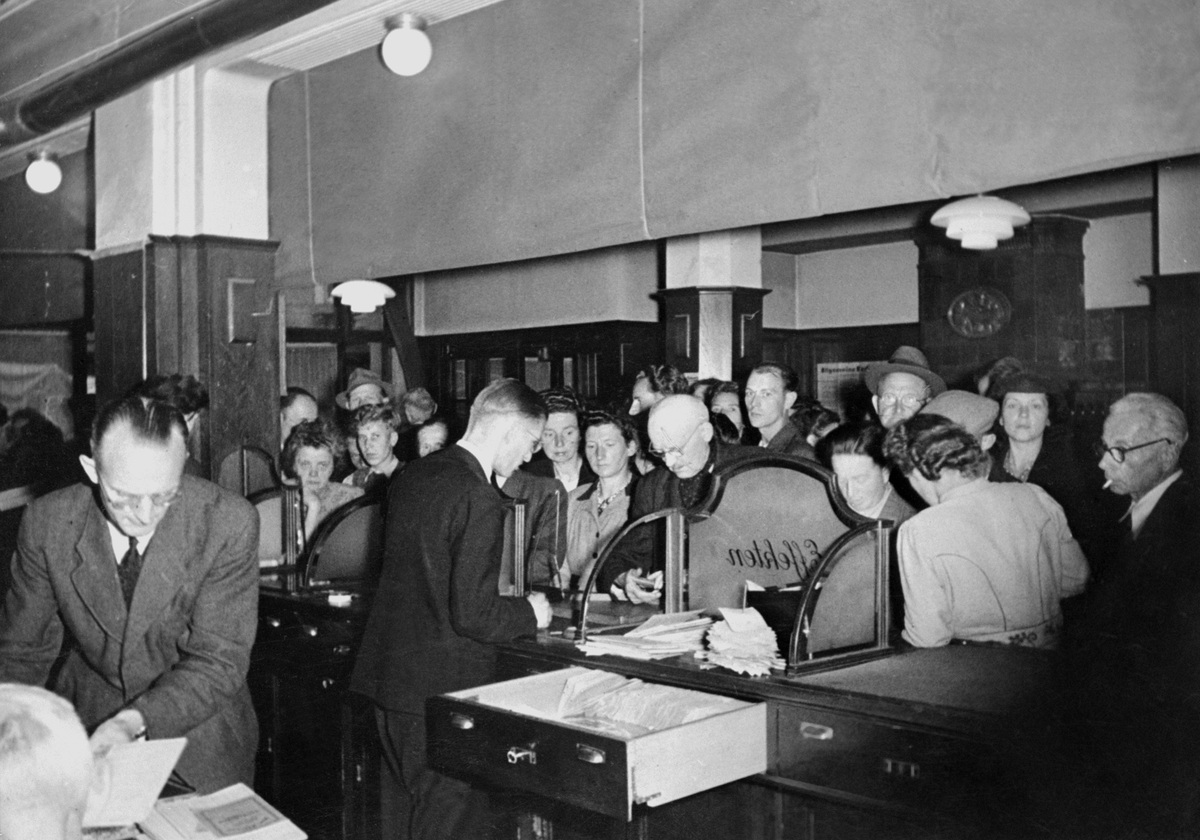 Germans wait to change their pre-World War II currency, the reichsmark, into deutschemarks, which were introduced in 1948 in western Germany. The deutschemark was later replaced by the euro.

"In recent years, the trend has shifted toward hoarding money on current accounts. The Germans are also ahead of the rest of Europe in this respect," says Agnieszka Gehringer, associate professor of international economics at the University of Göttingen.

"By holding cash, I have something tangible in [my] hand that gives me more security than something intangible, like electronic money," she says.

There are also historical reasons for Germans' passion for hard cash. "We know that for many, mostly elderly people in Western Germany, the [former currency] deutschemark ... was a synonym for the Wirtschaftswunder, i.e. the economic boom experienced in the reconstruction phase after World War II. This seems to be connected to the building of a new democratic state, peace and freedom," explains Oliver Serfling, associate professor of economic policy and development at the Rhine-Waal University of Applied Sciences.

For people in the eastern part of the country, he says, money was a symbol for the end of the socialist economy of scarcity, for participating in the well-being of the West and the reunification of Germany. "This might have created a heartfelt relationship of the Germans with their money," Serfling says. "Many Germans struggled already with the introduction of the euro coins and banknotes in 2002. But to switch now to face- and soulless smartcards, NFC tags or simply swiping the smartphone might feel to many like a miserable divorce." (NFC stands for near-field communication, which enables mobile devices to communicate with payment systems with a tap.)

There is a common German saying, "nur bares ist wahres," which means "only cash is true." Reining it in is unthinkable for most Germans. Last year, a plan by the German finance minister to cap cash payments at 5,000 euros was canceled partly because of the public backlash.

Politicians' and economists' calls to put limits on cash are often framed as a way to combat tax evasion, money laundering and other criminal activity. But while some countries, such as Sweden, are on their way to going cashless, Germans widely oppose this.

Serfling conducted an online survey in 2017 about national attitudes about eliminating cash payments. "We received a yelling 90% rejection to abolishing cash payments and this across nearly any substrata of the population," he says.

For Neuberger, the University of Rostock professor, banning anonymous payments would let the government access more information of citizens than the constitution allows. "It would touch on the foundations of a free and participatory society for all members and violates the fundamental right to informational self-determination," she says.

In 2017, Germany passed a law requiring proof of identity to pay more than 10,000 euros ($11,341 at the rate as of publication) in cash. There is an ongoing debate about whether it will help authorities fight money laundering and criminal financing.

Even with Germans' reluctance to give up physical money, analysts do see potential for change in new generations. When Gehringer asked her university students, around 80% said they frequently make electronic payments.

Change may happen. But the average German's need for security, Gehringer says, will be sure to slow the process.