Accessibility links
NPR Review: 'Ayesha At Last,' By Uzma Jalaluddin There have been an awful lot of South Asian adaptations of Pride and Prejudice recently, but Uzma Jalaluddin's tale of two Toronto Muslims — one conservative, one liberal — stands out beautifully. 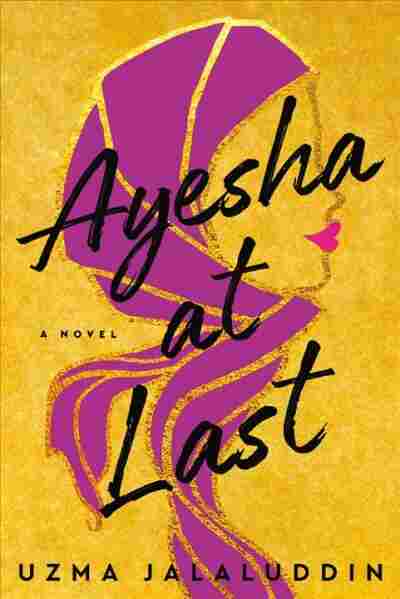 South Asian adaptations of Jane Austen's timeless Pride and Prejudice have become quite popular recently — and no, watching the 2005 Bollywood-style token film Bride and Prejudice — the only famous Indian adaptation of Austen's novel — doesn't mean we've seen it all. Uzma Jalaluddin's debut novel Ayesha at Last — which reads like an Indian soap opera with a dash of Shakespeare — stands out beautifully in the crowd.

The novel kicks off with Khalid Mirza and Ayesha Shamsi, two Muslims living in Toronto, who clash at every turn over different interpretations of their faith. Khalid, who's more conservative, is content with allowing his controlling mother to run his life and arrange his marriage because "love comes after marriage." Ayesha, on the other hand, is a fiercely independent poet on the rise, who would much rather focus on her career and find a husband on her own than be pressured into a relationship by her gossipy community, just because she's getting older.

When they're forced to work on a conference together at their mosque, judgmental glares and biting remarks give way to a burgeoning attraction that leaves Khalid confused; after all, his mother has always warned him about the dangers of pre-marital love. "These Western ideas of romantic love are utter nonsense. Just look at the American divorce rate," his Ammi says.

Understandably, we don't see traditionally sexy scenes in Ayesha at Last, but the palpable friction between Khalid and Ayesha as they dance around like two magnets desperate to connect creates a whole new level of non-physical seduction. Jalaluddin carefully teases out their romance, taking just enough time and adding just enough heat to make it rise as gracefully as Ayesha's grandmother's parathas.

Their encounters overflow with tension — which reaches a peak when Khalid's mother sets him up with Ayesha's younger (and wealthier) cousin Hafsa, thereby forcing them to admit their feelings and look past their differences, or lose each other for good.

Despite the similarities in the premises, Ayesha at Last is more than just a Muslim retelling of Austen's work; Jalaluddin constructs a timely and enlightening narrative that validates the experiences of many South Asians and Muslims today, while weaving in universal themes of identity, class, and discrimination. Though the topic of arranged marriage is prominent in the story, it acts more as a conduit to start lively debates about tradition and change among the different generations. And by highlighting ideological differences between many of the Muslim characters, particularly Ayesha and Khalid, Jalaluddin helps dismantle the misconception that all Muslims are alike.

Understandably, we don't see traditionally sexy scenes... but the palpable friction between Khalid and Ayesha as they dance around like two magnets desperate to connect creates a whole new level of non-physical seduction.

Even so, our romantic duo experiences their fair share of microaggressions and discrimination because of their culture and religious attire; in fact, Khalid's supervisor at work goes to extreme lengths to sabotage him, and the uncertainty that constantly follows him at the office — coupled with the private workplace conversations we hear about him — is heartbreaking. Jalaluddin, however, empowers her characters to stand up to injustice and practice their religion with pride instead of staying silent. They don't ask why they're being victimized, rather, they want to know how they can speak up, educate others, and be authentic to themselves.

By actively discussing their faith, Ayesha and Khalid begin to change the xenophobic narrative that so often surrounds Islam. In many ways, Ayesha at Last's fictional universe acts as a microcosm of a diverse and oft-misunderstood community, and Jalaluddin's compassionate and sensitive writing about it radiates off the page.