Accessibility links
Interview: 'Always Be My Maybe' Stars Ali Wong And Randall Park The stars and creators of Always Be My Maybe, a romantic comedy with a mostly Asian American cast, brought elements of their own California childhoods into their new film. 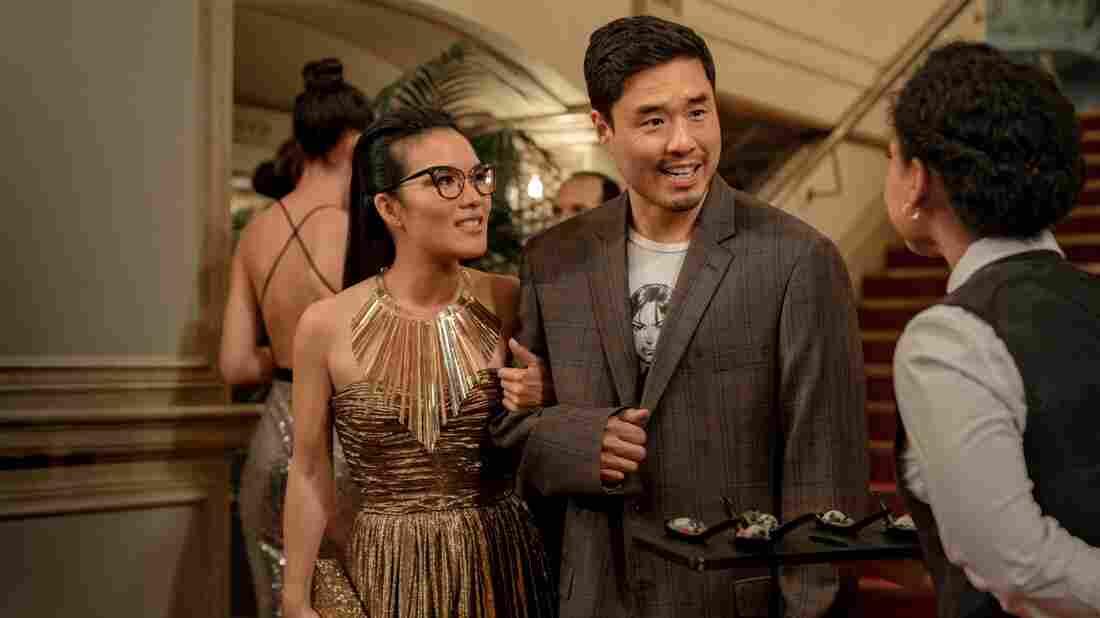 Ali Wong and Randall Park say that Always Be My Maybe has long been in the works as their original spin on When Harry Met Sally. Ed Araquel/Netflix hide caption 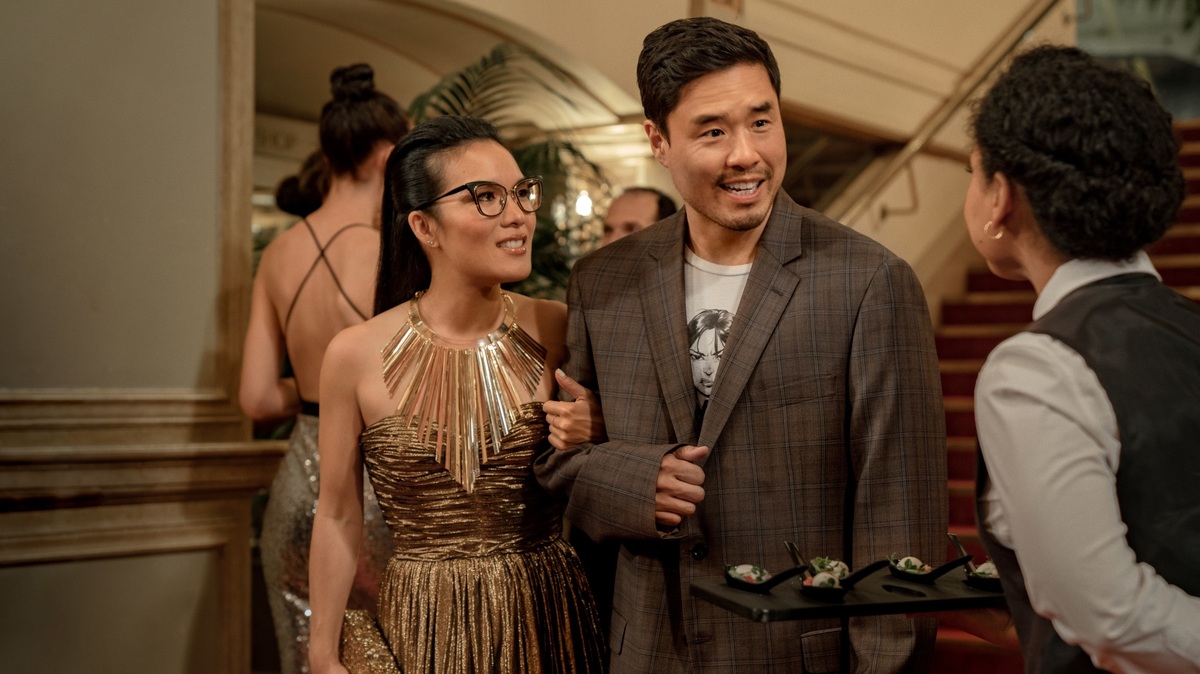 Ali Wong and Randall Park say that Always Be My Maybe has long been in the works as their original spin on When Harry Met Sally.

In the new romantic comedy Always Be My Maybe, the romantic male lead is a dorky dude living with his dad. His love interest is a famous woman who is not too busy for men.

Here's another rom-com trope this movie breaks: they're both Asian Americans, and have steamy love scenes.

The movie takes place in San Francisco where Sasha Tran and Marcus Kim grow up together, become inseparable, have sex for the first time with each other and then stop talking until 15 years later — when they run into each other again.

Ali Wong and Randall Park are the leads and co-writers of Always Be My Maybe, out now on Netflix. You may know Wong from her comedy specials Baby Cobra and Hard Knock Wife, or Park from the TV series Fresh Off the Boat. They're joined by actors like Daniel Dae Kim, James Saito and, well--

In a joint interview, Wong and Park talked about how the movie came to be. (Editor's Note: This conversation includes some frank talk about sex that may be offensive.)

Park: A lot made its way in there. The mom is a painter; my mom was a painter. In fact, a lot of the paintings that were actually in my house growing up ended up in the movie, which was really surreal and very sweet to me to see. The band [in the movie] — I was in a band [in real life, called Ill Again] that Ali was very aware of. ...

Wong: Oh my God, I was beyond aware of the band, yeah. I went there [to Ill Again concerts] and it was the place to be. It was where you would go to — I mean, you would watch the band, but it was also: You know all the cool kids were going, so it would be the place to go to see and be seen.

Garcia-Navarro: So that's amazing, 'cause I have to say, Randall, you do really good rap in this. I mean, you are legit, I think. Have you gotten a lot of praise for that?

Park: Yeah, it's another one of those many things that people seem to love about the movie, which is—

Wong: They love the music. They love you rapping.

Wong: Well, if you think about it, it's interesting. If people didn't know that you were in that band, and they think you did that from scratch--

On how they came to make the film

Park: Basically, after Baby Cobra came out, there was a New Yorker profile on Ali, and in the profile, she mentioned, just casually mentioned that she always wanted to do this project that we had always been talking about — kind of our version of When Harry Met Sally. And after that, there seemed to be a lot of interest for that script — but we didn't have a script. ... Her genius and the massive success of her special was the spark.

Wong: But, and then, I think a lot of people, including myself, have been itching to see Randall Park be the lead of a film. It's long overdue, you know. If you look at Randall's IMDb page, it has like 150 credits. It's ridiculous. And everybody knows him from something, because everything he's guest-starred in, he just always shines and just fill[s] up the entire room. You look at someone like that, and you're like: Are you kidding me? You're that handsome, you're that charismatic, you're that pleasant to work with and you're that talented. And it's--

Garcia-Navarro: I want someone to talk about me like that.

Wong: You know, it's long overdue.

On their characters in the movie

Wong: You know, it's tough when you have to wait around for other people to write something for you, because there's no precedent for someone who looks like you to play certain characters, right? So it's such a unique character that I've been dying to see and put on camera for a long time, that [Park] plays. And that's something for me that's really personal. You know, Marcus is very much this guy that I grew up with in the Bay Area. And it's a very specific person — that guy who's great. He lives at home, with his parents, well into his 30s. He's confident, he has his artistic passion, but he has his day job, and he's good. He doesn't need anything else. And he's sexy and he's attractive despite the fact that he lives at home and he's not, like, super-rich or whatever. And so: It's so exciting for me to see that guy, you know?

Garcia-Navarro: And then there's you, Ali. You are a successful woman in this film who doesn't have problems landing men — can even land Keanu Reeves, if she wants.

Park: And usually when you see successful women who run big companies in movies, it's like, they wear shoulder pads and they're strutting down the bullpen, firing people.

Garcia-Navarro: And then crying in their office because they're too busy to have a relationship.

Park: Right. But here you have somebody just living their full life, but somebody who's also vulnerable. It's a real, real human being that we can all identify with.

Wong: And something that people have picked up on is that she wears her glasses from the beginning to the end, which is extremely rare in a rom-com. Which I didn't even realize! But usually there's some sort of makeover that involves--

Park: Where they ditch the glasses.

Wong: Where they ditch the glasses. And I'm not ditching those glasses!

On the sex in the film

Wong: I guess — you know, it's funny, because someone was telling me that they wished there was more sex. That they wished that there was, like actual thrusting. She thought we'd chickened out. She was like: That would have been revolutionary, if you'd shown two Asian Americans thrusting. ... Well, noted. I'll know that for the next rom-com I star in where I cast three other stellar snacks.

Wong: Yeah, for sure. ... We talk a lot about Boomerang, and how that's one of our major inspirations ... And Boomerang is a super-sexy movie – in addition to being funny, and grounded, and having a great soundtrack. That movie's sexy. It's something that I remember, you know? And so, yeah, I think it was important for it to be sexy. 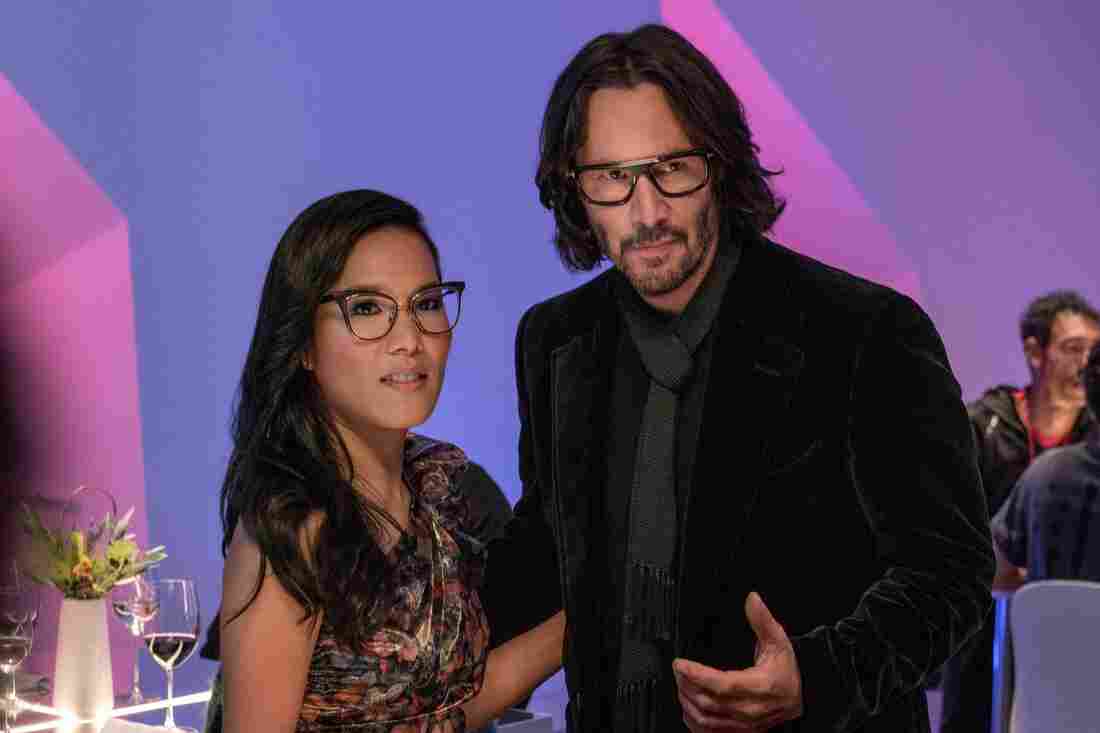 In Always Be My Maybe, Keanu Reeves plays a heavily exaggerated version of himself. Doane Gregory/Netflix hide caption

On casting and working with Keanu Reeves

Wong: Well, in terms of story, we thought when — at that point at the farmers market, when Marcus is ready to tell Sasha that he has feelings for her, and she reveals that she's actually dating somebody — we thought to ourselves: OK, in terms of story, right, who would be Marcus' worst nightmare? ... It was very important to me, personally, that all of Sasha's love interests be Asian American. And we thought to ourselves: OK, we should get an Asian American icon who's a great actor, who's funny and is willing to make fun of himself. And the only person in the entire universe who fits those first three parameters is Keanu Reeves. And we didn't know if he'd be willing to make fun of himself, right?

Wong: Yeah, he got it right away. And we still can't believe — because when people keep on asking us, we're like, "Oh yeah, that is crazy that we got him to do that."

Park: And he came with so many suggestions and improvisations and—

Garcia-Navarro: Really? What did he come with?

Wong: The glasses — wearing the glasses with no lenses, that was his idea. Lots of stuff, yeah. ... And he hadn't seen the movie. He hadn't seen the rest of any of the scenes get shot, right? Because he'd been so busy — he was in the middle of shooting John Wick [Chapter 3 – Parabellum] when he did our movie. He was literally in the middle of it, and he came and did four days on our movie. And at the premiere, we didn't know if he was going to show up, because he was so busy again promoting John Wick. And he showed up, and he sat behind me. And it was so delightful to hear his reaction throughout the entire film. He was dying laughing. It was so touching and sweet to watch.

On what it feels like to have the movie out

Park: It feels amazing. And the fact that it might be moving the culture and representing Asian Americans, that's all — that's like icing on the cake. That's great. But none of that would have happened had we not told a great story.

Sophia Alvarez Boyd and Ed McNulty produced and edited this interview for broadcast. Patrick Jarenwattananon adapted it for the Web.