Accessibility links
Avicii Collaborator Says Finishing Posthumous Album Was 'A Grieving Process' After Avicii died by suicide last year, a team of longtime music partners was tasked to wrap his album. When it came to manipulating his friend's work, producer Carl Falk had to ease into the process. When DJ-producer Avicii died by suicide last year, the music world mourned its sudden loss of the 28-year-old Swedish talent.

For the electronic artist's friends tasked with seeing his posthumous album to the finish line, the creative process presented a particular challenge.

Swedish producer Carl Falk, Avicii's close friend and collaborator, says he was paralyzed with grief he associated with manipulating his friend's music.

"It was almost impossible to go to the studio for the first couple of weeks," he says. "I would open a song and I would play the song and all of a sudden, you're like, 'Oh, this piano was recorded on this keyboard in Tim's house and his vocals, I remember — there were so many memories that came up."

Before his death, Avicii had been working on songs for a new album and left the tracks nearly complete. So his family turned to a group of Avicii's longtime creative partners to see it through.

The musician's father, Klas Bergling, was adamant about its release. "No question about it," he said in an interview with The New York Times.

Despite the emotional and creative challenges, Falk says he felt confident about what he thought Bergling envisioned for the album. 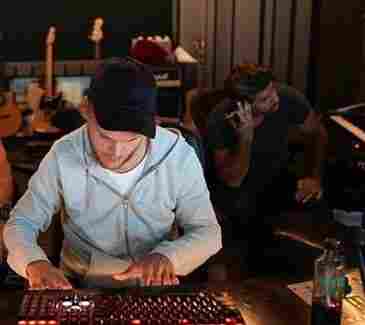 Falk describes Avicii's push for an evolved sound, involving "slower tempo, more organic instruments, a lot of African influences, a lot of darker lyrics ... this is new ground for Tim."

Bergling, who could be obsessive about finding the right melody, Falk says, was determined to reinvent himself with his next genre-transgressing work. The producers also drew from conversations and text messages with Bergling, in addition to the meticulous notes kept on his computer.

But that tight-knit relationship also made the process much more difficult.

The responsibility he felt to properly honor his friend weighed on him. "It didn't take me long to realize that, 'OK, I can't. What should I do with this? I can't take anything away, I can't add anything to this? I don't have the right to do that. ... This is Tim's legacy right here that I'm looking at,' " he says.

But baby steps helped Falk move forward with the project. He would tell himself, for example, "I'm just gonna listen to these tracks and I'm gonna go home."

The Making Of Avicii's "Bad Reputation"

After months of sitting with material that both musicians produced, he started to feel empowered to honor his friend with the record's completion.

"All the songs me and Tim have done has been a little bit of Tim and a little bit of me, which was an eye-opener for me," Falk says. "Then I realized that I can actually make decisions, I can finish this without him as long as it's done as a celebration to him and, you know, feel like Tim's sitting there with me."

The album's final track, "Fades Away," presented one such hurdle, where Falk carried out a posthumous collaboration.

Avicii's slow piano is heard in the track's intro. "The rest of it was all about him."

Avicii — who in 2016 announced his retreat from the world tour lifestyle after years of hard partying had taken a toll on his health — wanted to write a song that felt really slow, Falk says.

"Then, when the melody drop part came, it would almost be double tempo," he says. "And the contrast between slow and fast should be the thing."

It's an up-and-down contrast that's mirrored in the mixed emotions Falk felt throughout the album's production.

"That song sums up the record for me," he says.

And Falk has managed to treasure the positive memories. "It became almost like a comfort to work on these songs and to have them, to listen to, to remember and to think back on the whole process how they were put together."

NPR's Dustin DeSoto and Liz Baker produced and edited this story for broadcast. Emma Bowman adapted it for the Web.