Accessibility links
Thousands Of Protesters Take To Hong Kong Streets Against Extradition Bill The controversial bill would let suspects be sent to places where Hong Kong has no extradition deal, such as mainland China. Authorities threatened to use force on demonstrators. 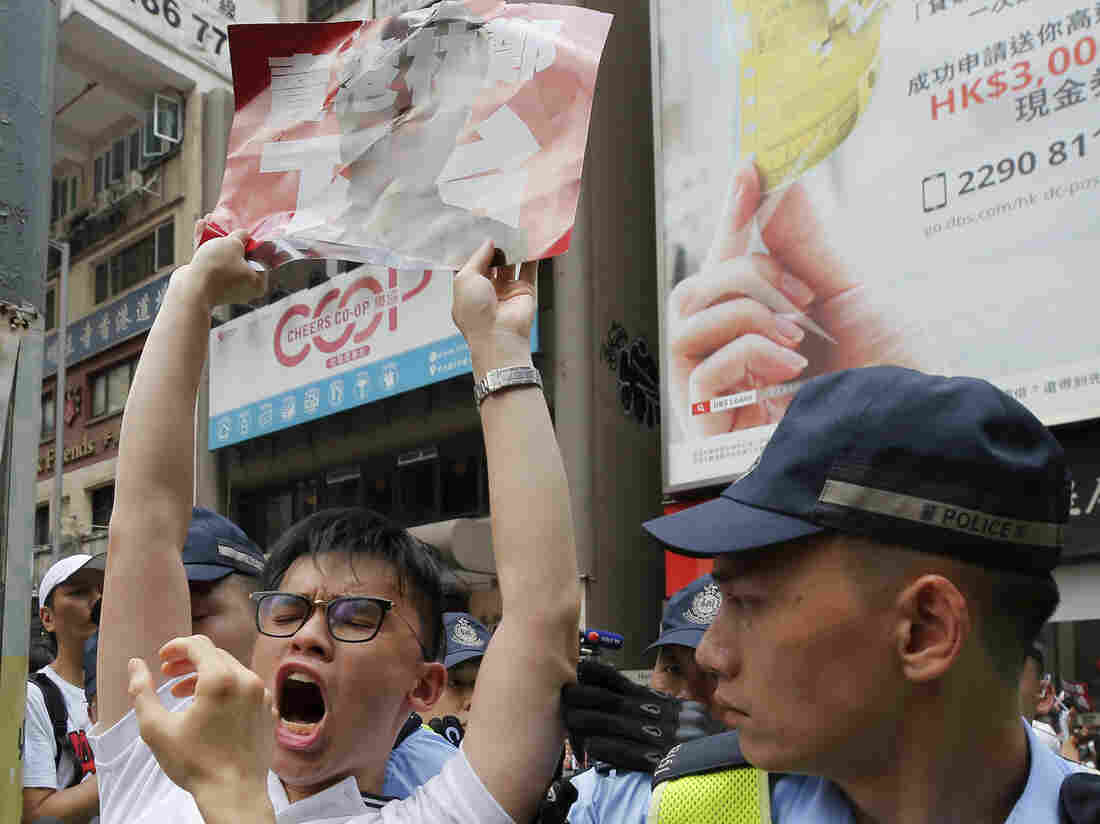 A protester shouts next to policemen during a rally against the proposed amendments to extradition law in Hong Kong. Kin Cheung/AP hide caption 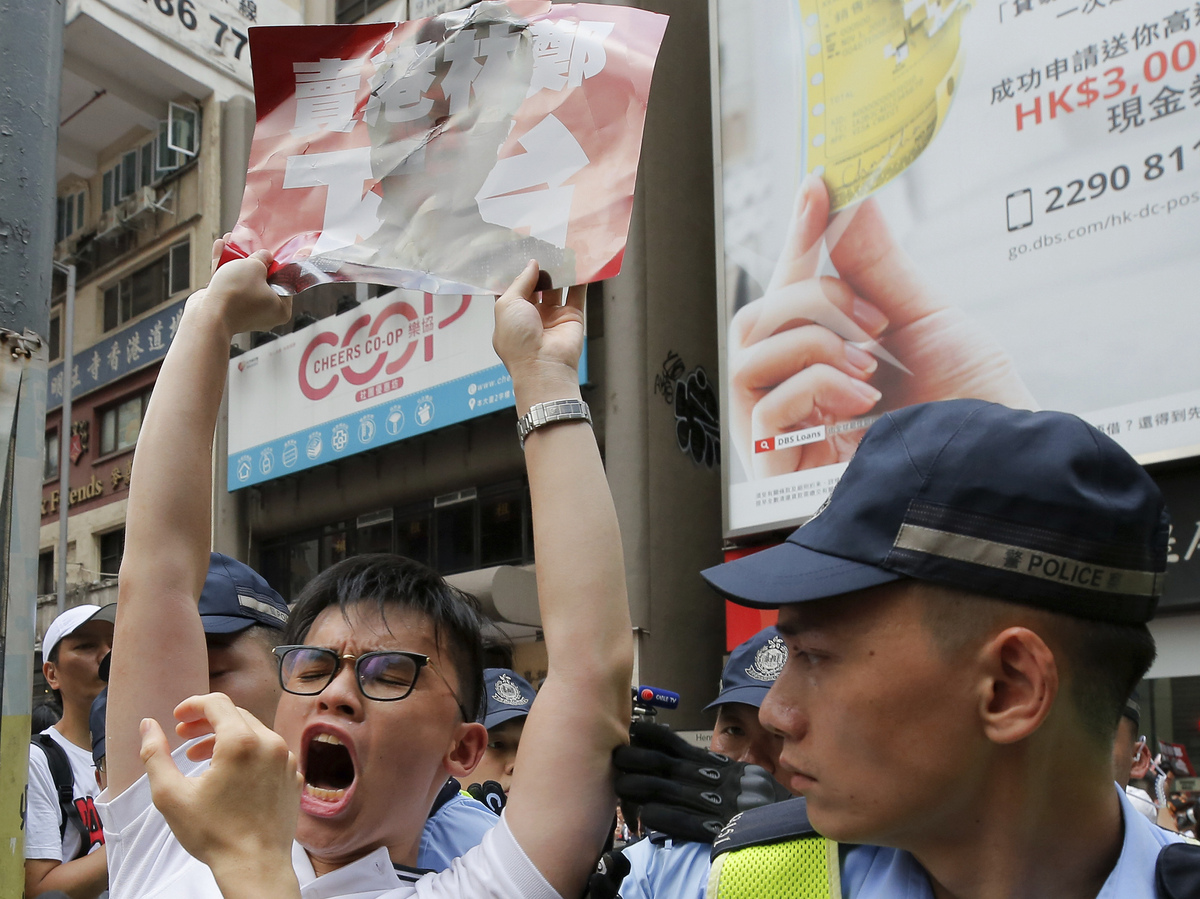 A protester shouts next to policemen during a rally against the proposed amendments to extradition law in Hong Kong.

Hundreds of thousands of people flooded the streets of Hong Kong on Sunday in a show of defiance against a government proposal that would allow people to be extradited to mainland China to face charges.

Organizers of the protest say more than 1 million turned out to the streets, or roughly one in seven Hong Kong residents, but police estimated the crowds were far smaller.

People carrying banners and signs objecting to the government-backed legislation marched and chanted "no extradition" through the city center. Many of the marchers wore white, a symbol of justice and mourning in Chinese culture.

Crowds were so large that many protesters were stuck in subway stations, waiting to join.

Two and a half hours later - Hong Kong’s rally against extradition is going strong. Feels like a historic moment. Many people who don’t protest normally are here. pic.twitter.com/gKsLPFDN6v

The overflowing throngs of people stretching more than a mile marched for hours through the skyscrapers of downtown alongside a heavy police presence.

The Civil Human Rights Front, which organized the protest, said 1.03 million had showed up on the streets to show their solidarity. Police in Hong Kong offered a lower number, saying about 240,000 people turned out.

The showing was said to be larger than for a similar protest in 2003 against national security legislation. Alex Ng, a 67-year-old retiree, told The Associated Press she joined the protest because "I think that there was never any public consultation about this law, and there are a lot of uncertainties."

The bill at the center of the demonstrations would let criminal suspects be extradited to places where Hong Kong has no formal extradition agreement, such as mainland China.

China has been excluded because of concerns over its poor record on legal independence and human rights, the AP reported.

Stunning image of the protest in #HongKong today (just posted on @AppleDaily_HK's Instagram account.) Many we spoke to said it was the first time they joined a protest & felt a proposed extradition law would so fundamentally alter the city's freedoms that they couldn't sit back. pic.twitter.com/fUwStzEN1A

"I just had to come here today. Who knows if we will be extradited to the mainland in the future if the bill is passed? For my child, it's an education for him today," Wister Au, an IT professional, who brought his 14-month-old son Marcus along in his stroller, told The South China Morning Post.

Although the demonstration were largely peaceful, minutes past midnight local time Sunday, skirmishes erupted between protesters and police after a group busted through police lines near government headquarters, where the march had ended. Videos shared on social media showed police, some in riot gear, dispersing crowds by using pepper spray and batons.

Officials in Hong Kong are expected to bring the proposed law to parliament on Wednesday. Critics of the bill say it would enable China to prosecute its political opponents in the city. Yet Hong Kong's leader, Carrie Lam, is pushing for the proposal's passage before summer break in mid-July.

In Washington, D.C., a group of bipartisan legislators led by Rep. James McGovern and Sen. Marco Rubio, who chair the Congressional-Executive Commission on China, sent a letter last month to Lam expressing concern that the law would "negatively impact the relationship between the United States and Hong Kong," asking that the legislation be immediately withdrawn.

Lam has defended the law by saying it will close a long-standing legal loophole.

#hongkongers are making history today. All lanes of the Hennessy Road - including those which police refused to open before - are flooded by protesters against the #extraditionbill @SCMPNews pic.twitter.com/UTr2ui7Fix

The immediate goal of the government is to have a Hong Kong man suspected of killing his girlfriend sent to Taiwan to stand trial, the Post has reported.

But there is widespread concern about the broader implication of the proposed law for Hong Kong, a former British colony that was returned to China in 1997 but has maintained its own legal and political system for 50 years.

"I needed to let my voice be heard," Kitty Wong, a 38-year-old teacher who joined a protest for the first time, told The Wall Street Journal. She gestured to her two children, ages 8 and 9, and said: "We need to defend our home for the next generation."