Accessibility links
Robyn's 'Dancing On My Own' Opens The Corners Of Community The magic of Robyn's millennial anthem is its bait and switch: It's a fun, energetic dance song about being lonely and heartbroken. And yet, the minute you hear it, you instantly feel less alone. 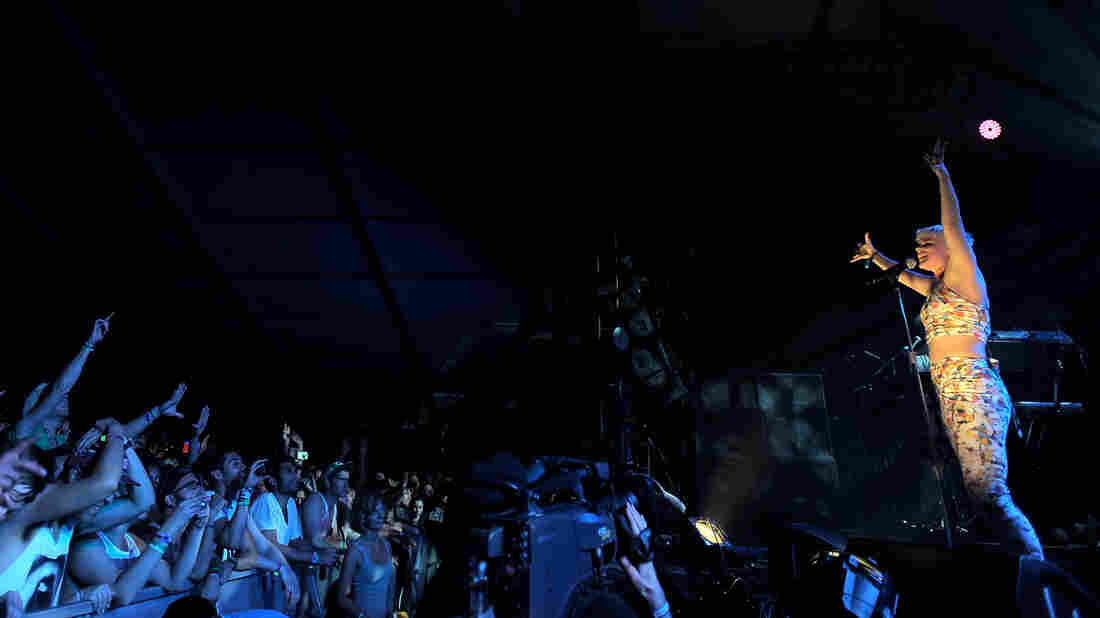 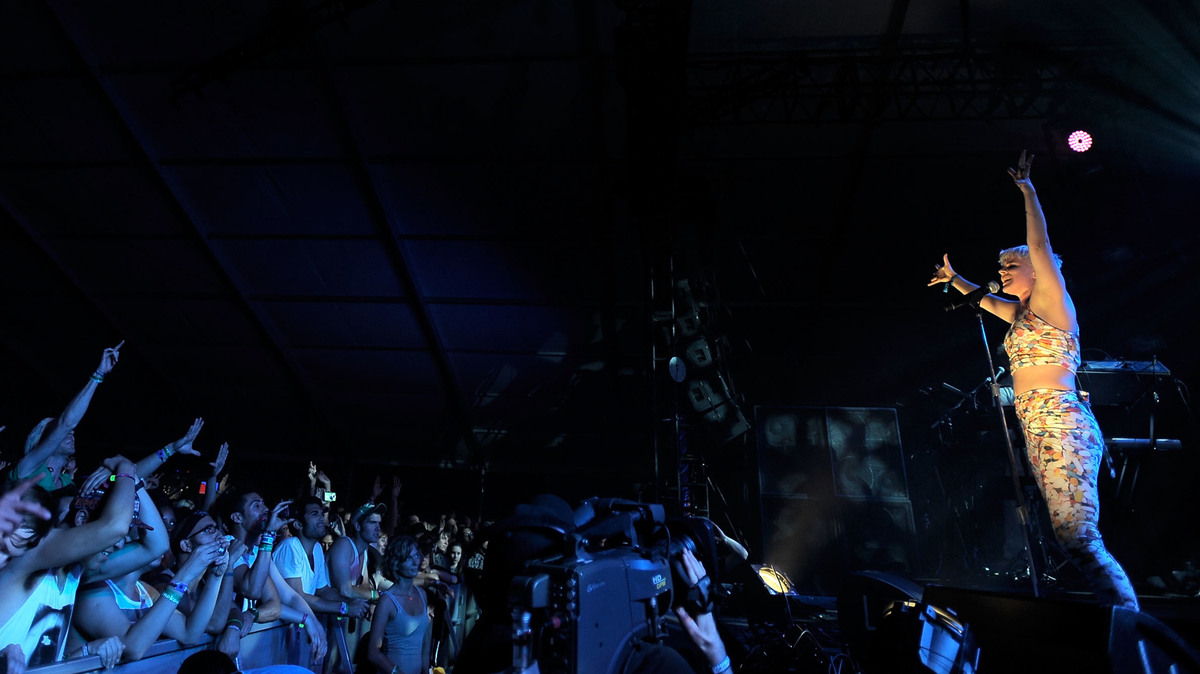 Robyn performs at the Coachella Valley Music & Arts Festival in 2011.

"Dancing on My Own" starts with one of the most visceral, propelling four-to-the-floor beats of the past few decades. The tempo is perfectly situated right around 118 beats per minute, pretty close to what scientists say is the preferred walking tempo for humans. The one-five-four chord progression is immediately familiar, like it's been around since the beginning of time. Everything about it is meant to make you smile and move and dance. It could easily be a perfect teen pop song, especially considering Robyn got her start making just that.

But "Dancing on My Own" is more than that. When the lyrics start, you realize she's tricked you, that it's all one big bait and switch. This is a breakup song:

Somebody said you got a new friend
Does she love you better than I can?
There's a big black sky over my town
I know where you're at, I bet she's around

In lesser hands, it might be confusing. When Robyn does it, it's human. Contrary emotions wrapped up in one package, happiness and sadness living together in a groove: Everything about this song is a juxtaposition. That's what makes it an anthem.

When I decided to make "Dancing on My Own" my pick for NPR's American Anthem series, I went to social media and asked anyone who saw the request to send me their stories about the song. I heard a little bit of everything.

There were the DJs who spin it at wedding receptions, knowing it will get everyone on the floor. People who have played it for hours in one sitting, or kept it on repeat for a road trip hundreds of miles long, or made it the last dance at every house party they've ever thrown. People who insist it can be a queer anthem: "Is she singing 'I'm not the GIRL you're taking home' or 'I'm not the GUY you're taking home'? Who knows! Maybe she MEANT it that way? ROBYN IS A GENIUS," they said, more or less. The ones who have used it to get through not just breakups, but cancer, or death, or a lot more, who love that decadent drum fill toward the end more than life.

All stories of juxtaposition. People finding community in a song all about being solo.

In the late 1990s, when she was still a teenager, Robyn had two U.S. Top 10 singles. "Show Me Love" and "Do You Know (What It Takes)" were in line with the rest of the teen pop from those days, adjacent in sound to the Backstreet Boys and 'N Sync and Britney Spears. Less than 10 years later, Robyn had left all that behind, made her own label, Konichiwa Records, changed up her image and started making pop with an edge.

"It was a big, big change for me," Robyn told NPR in 2010, "but I really didn't feel like I had another option. For me it was like the last, last thing to try, before I was going to quit music."

It worked. Robyn's self-titled album and its follow-up, the three-part Body Talk series, made her a star in Europe and a cult favorite in the States. Music critic Sasha Geffen says in this new phase of her career, Robyn succeeds because she still has teen pop in her heart, even if she broke up with that part of the industry.

"It's important to see her as a teenager who survived," Geffen says. "She has kind of learned to carry the intensity of teenage emotion into perfectly adult pop songs ... which I think is incredible."

It's as if Robyn wants you to live in that space — to give you time to insert all of your emotions and stories and feelings into the seconds between the lines.

Patrik Berger, who co-wrote and produced the song with Robyn, told me the lyrics were the hardest part. The chords and the track and the melody came together pretty quickly, but every single word took its time.

"I think we spent, like, a couple of days on each line," Berger says. "I remember we were texting each other for, like, weeks on lines. I have a notebook [full] of lyrics that we scrapped."

The result is only around 130 words, with a simple, accessible story. A woman ends up at the same club as her ex. She sees him across the floor, dancing with someone new. She's hurt, but she keeps dancing, over a floor full of stiletto heels and broken bottles. Drum break. Repeat.

Nate Sloan, a musicologist at the University of Southern California and host of the music podcast Switched On Pop, says the miracle of those lyrics is their sparseness. "[There's] like six seconds of silence between each line in the verse," Sloan says. "Which is not a lot of time in the abstract, but on a pop song, that's like eons."

It's as if Robyn wants you to live in that space — to give you time to insert all of your emotions and stories and feelings into the seconds between the lines. Berger says his favorite line is one that gets at an extremely teenage feeling:

Yeah, I know it's stupid
I just gotta see it for myself

Though "Dancing on My Own" was never a radio hit in the states (I've never heard it on the radio once), it has had a long shelf life. Lena Dunham and Allison Williams danced to it in an episode of HBO's Girls, pushing through their characters' mid-20s pain. Just this year, it ran under the credits of the Charlize Theron/Seth Rogen rom-com Long Shot and was a major plot point in the Elle Fanning pop fable Teen Spirit. In 2016, Britain's Got Talent contestant Calum Scott took his slowed-down acoustic cover to No. 2 in the U.K., a higher peak than that of Robyn's original recording.

But whenever the song has popped up in the close to 10 years since its release, the moral of its story has remained the same. Everything I've found in the months I've spent thinking about it, talking to people about it, working it into my bones, has shown that this song, all about being alone, has helped people find community and togetherness.

Nora McInerny is one such example. "That whole album [Body Talk] reminds me of it being October in Minnesota," she says. "The sun shining, this really blue crisp sky. The air is cold, the leaves are turning but it hasn't snowed yet, and I'm driving down the freeway, listening to these songs that are so hopeful and energetic. It just feels like falling in love when I hear those songs."

Nora is a writer and host of the podcast Terrible, Thanks For Asking. She says the moment she met her husband, Aaron, he had one question for her: "Do you like Robyn?"

Aaron made Nora consume the singer's entire discography, and it became the soundtrack to their courtship. She says she remembers him killing Robyn's songs at karaoke, or dancing so wildly to them that he once caused a good friend to tear his ACL on the dance floor: "Strangers would applaud him." When they got married, they walked down the aisle to a Robyn song.

But a few years after their relationship began, it ended. Aaron was diagnosed with brain cancer. Robyn's music became a soundtrack to a different part of their lives.

'A Song For Any Struggle': Tom Petty's 'I Won't Back Down' Is An Anthem Of Resolve

Before Aaron died, he made Nora a playlist of songs to play at his funeral. She says about 1,000 people showed up to the "makeshift" ceremony, put together in a big studio space in Minneapolis. When the crowd had thinned out to about 100, the music, hand-selected by the man whose life they were there to honor, was still playing. Nora, a little drunk by then, found herself dancing with her friends to "Dancing on My Own."

To this day, she says, there's a moment in the song that makes her cry:

So far away, but still so near
The lights go on, the music dies
But you don't see me standing here
I just came to say goodbye

"What's true of most human experiences is that you're going to have more than one emotion at a time," she says. "It's very rare to have all of that in a song."

These days, she says, hearing "Dancing on My Own" makes her think of the friends she was with that night, or of how she now loves to pull her and Aaron's son out onto the dance floor at parties. She thinks about being in communion with others, finding some way to get through it all.

Nora, of course, is not alone. Go down the rabbit hole of live videos and you'll see crowds bursting into the chorus a cappella, singing perfectly and earnestly like a children's choir. Or the one where dozens of Robyn concertgoers wait on a subway platform after a show in New York: bundled up, crammed shoulder to shoulder, singing "Dancing on My Own," together.

This is what's so confusing, so endearing and so lovable about this song. When I talk to people about it, they tell me how it always manages to make them feel less lost — eager to dance themselves toward the next day, or the next party, or the next lover. It's a song about loneliness, but the moment you hear it, you instantly feel less alone.