Accessibility links
From Drought To 'Title-Town': Why Boston Fans Remain Insatiable The Boston Bruins hope to add yet another championship to Boston's collection when they take on the St. Louis Blues in Wednesday's Stanley Cup Final. 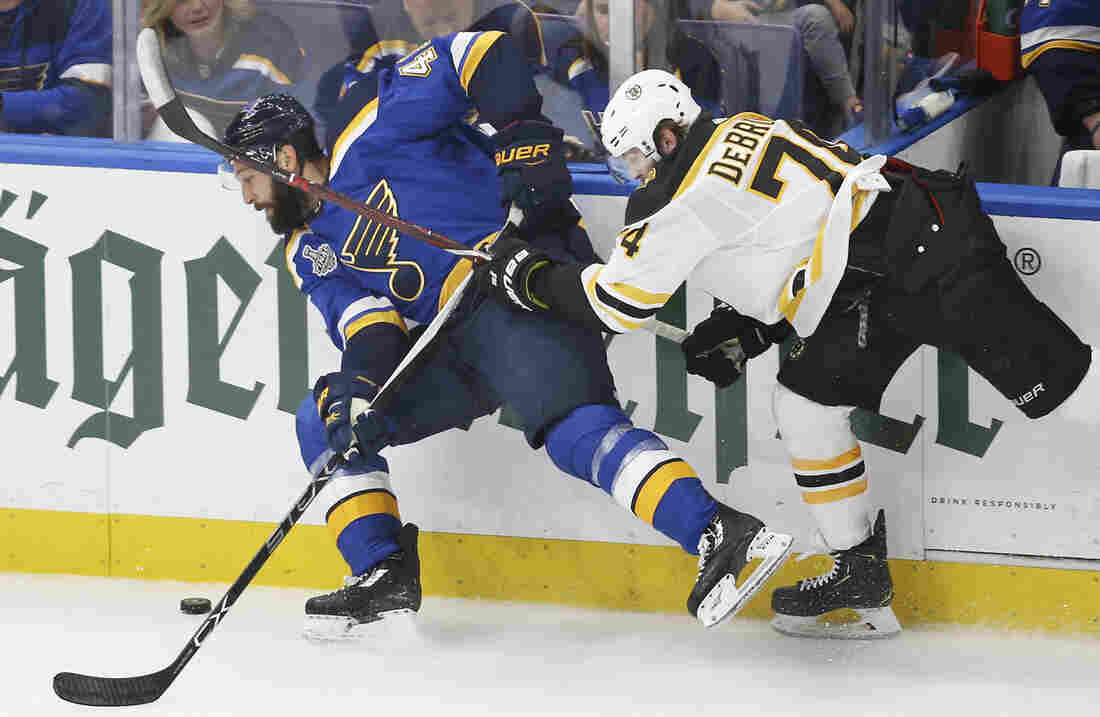 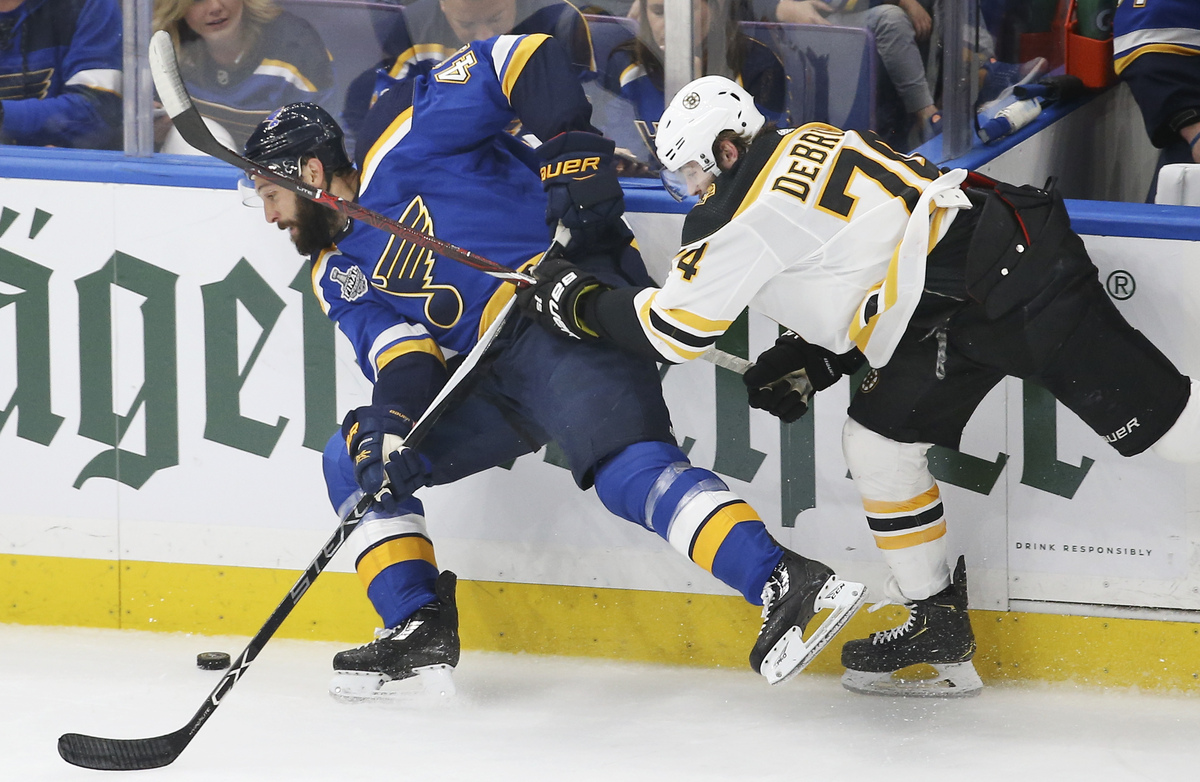 A warning to readers, this story may induce nausea in some sports fans, particularly those outside Boston.

As the Boston Bruins and the St. Louis Blues face off in the deciding Game 7 of the Stanley Cup Final on Wednesday, Boston is also vying to become the first team in nearly a century to hold three major sports championship titles at the same time. The Boston Red Sox and New England Patriots are already reigning champs. And the prospect of a third team winning too is fueling fans' already outsize egos in Boston, while prompting eye rolls elsewhere.

It's almost hard these days to remember Boston fans as what they used to be: those long-suffering, lovable losers, who endured endless seasons of traumatizing losses and the Red Sox's 86-year Curse of the Bambino.

"It's hard to root and lose all the time, it really is," says 49-year-old lifelong Boston fan Adam Weitzman, trying to explain his childhood to his son. "You end up hoping, hoping, hoping. And you want so badly for something to happen and it just never did."

"My grandfather was a lifelong Red Sox fan, and he died before they ever won," adds his wife, Stephanie Weitzman. "It was miserable."

"Yeah, I pity them," offers Mark, their 17-year-old, before letting out a little laugh.

For Mark's generation, being a Boston fan is a whole new ballgame. Winning is expected; losses actually come as a shock.

Watching the Bruins play Game 4, he and his folks hoot and holler at the TV. His mother and father watch from the edge of their seats, having learned the hard way never to take anything for granted.

Mark, however, kicks back on the couch, true to form for a guy whose short life has spanned six Super Bowl and four World Series wins, one NBA championship and one Stanley Cup ... so far.

Even when the Bruins are behind, Mark is cool, confident and even cocky.

"As long as there's time on the clock we can score," he says. "I mean the last game, they won 7-2. They can score fast when they need to." 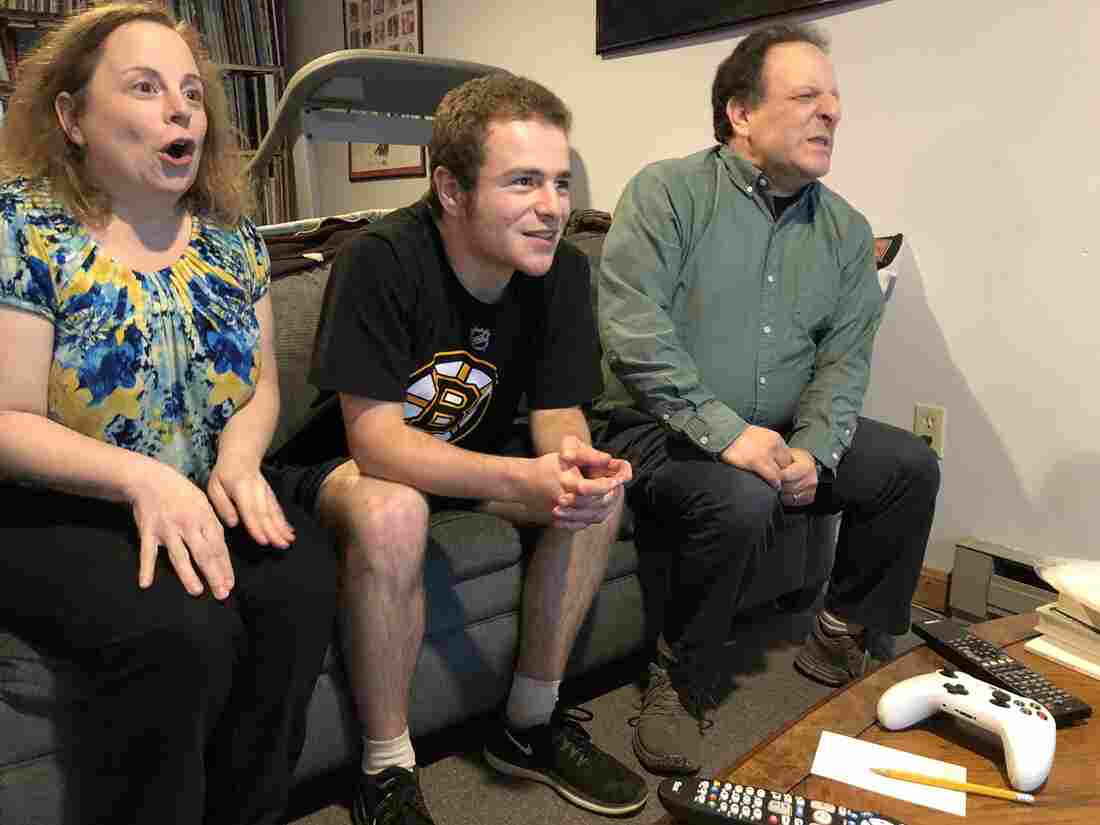 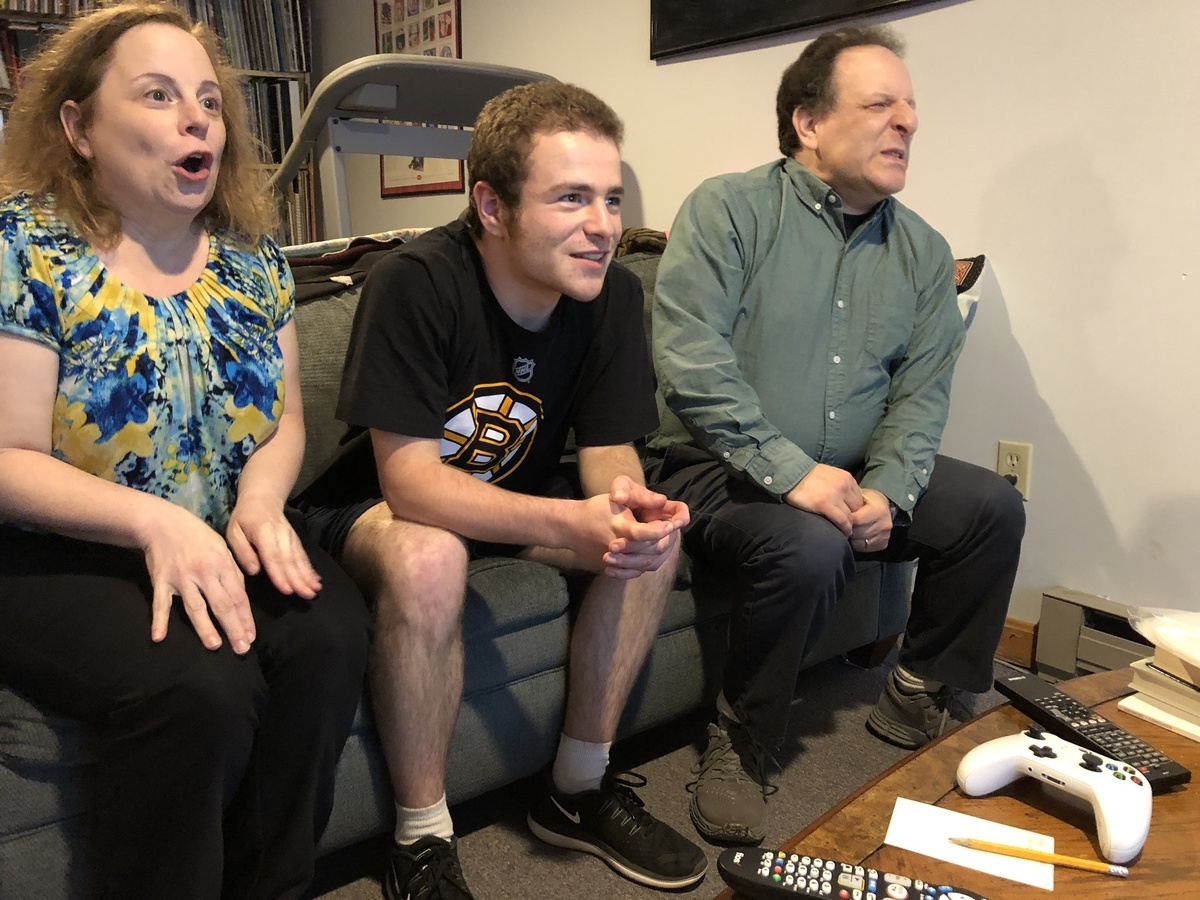 Such is the new normal for Bostonians born in this giddy era of 12 championships in 17 years. Even 3-year-olds in Boston have already seen more hometown championships than many middle-aged fans elsewhere have seen in their lifetime.

Mark readily admits that he has been spoiled. And his parents' warnings that no winning streak can last forever don't dampen his expectations an iota.

In what may be the ultimate humble brag, Mark says winning has now become so routine, the thrill of victory is actually starting to wear thin. He says championship wins now feel nothing like they used to. Like when the Patriots won the Super Bowl when he was 12.

"I remember it vividly," he says. "I was down here watching and I was speechless. I was so happy, I just couldn't say anything. It was all just flooding my brain. And now [when teams win] it's like ... eh ... it's pretty good," he says with a shrug.

Fan fatigue is less an issue with older Bostonians, who have lived sports-fan feast and famine; they still savor every win, with a ravenous appetite for more.

"It's like '[can there be] too much chocolate cake?' asks Jim Holzman, founder and CEO of Ace ticket and lifelong Boston fan.

So insatiable are Boston fans, they were actually griping this year that one of their four teams, the Celtics, only got to the NBA semi-finals.

"It's like the child who comes home with a report card with three A's and one B, and the parents are like, 'What's with that B?' " he says. 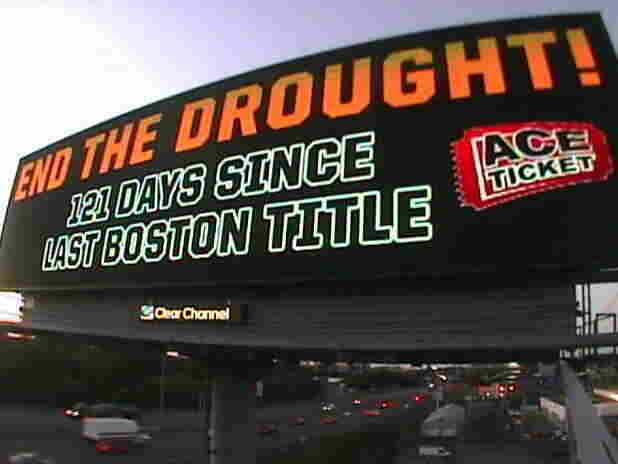 The abundance of championships that Boston has taken home over the past 17 years hasn't diminished the city's craving for more. Clear Channel hide caption 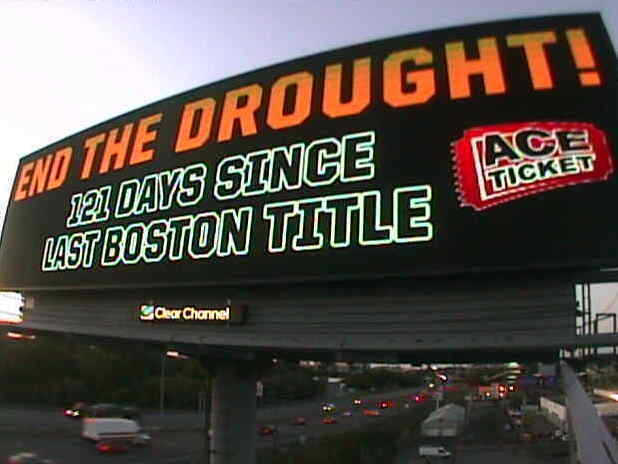 The abundance of championships that Boston has taken home over the past 17 years hasn't diminished the city's craving for more.

Holzman is among those fans happily milking this winning streak for every bit of bragging rights. In the months between titles, he has been putting up billboards faux-bemoaning Boston's "long" drought. One blared: "104 days since the last title!" Another, put up last week, says, "Let's go Bruins. Four-month-olds haven't seen a Boston Title."

That kind of gloating, plus the endless parade of championship duck boat parades in "New Ring-land" or "Title-Town," as Boston fans like to say, is what makes them so insufferable to so many others.

"It still feels like [they're saying] 'See?! See?! See?!' Like they still need to rub it in your face that they're finally winning," says USA Today sportswriter Ted Berg, a lifelong New York fan who recently ranked Boston fans the nation's "most hateable."

"It's that chip on the shoulder. It's just that, that unnecessary attitude, you know, it's not 'we won.' It's 'you lost' or 'we beat you.' And there is still that anger to it."

Berg thinks Boston has yet to get over a deep-seated inferiority complex, developed over those long, dark years of the drought and the curse. So does Yoni Kadden, a die-hard New York fan who has suffered his own kind of curse, since moving to Boston right when the city's winning streak began.

Boston fans go far beyond gloating, he says, doing things like chanting "Yankees suck!" even at a hockey game.

"What is wrong with these people?" he bellows.

But what really gets under his skin is the idea of Boston fans making themselves out to be the victims of jealous rivals, with slogans like "They hate us, cuz they ain't us."

"Um, no, that's not why we hate you, by the way," says Kadden. "We hate you because you're obnoxious!"

"Yeah, we are pretty insufferable," sighs Mark Weitzman, more resigned to the fact than bothered by it.

Boston fans may get an attitude adjustment one day, if — or when — an actual drought comes their way.

"I don't wish for that," he says. "But someday it's going to happen." And when it does, there will be an upside, Weitzman says: Younger fans like him will have a chance to experience the long-awaited, really exhilarating kind of win they've only heard about from their parents.

In the meantime, Boston is also hoping to shake up the monotony of its almost-annual championship title wins, by winning three this year. By Wednesday night, the Bruins may have won not only the Stanley Cup but also a place in the record books for the winningest year, in the winningest streak, for any city in modern sports history.