Accessibility links
Book Reviews: 'The Great Successor' By Anna Fifield Digs Into Kim Jong Un's Life Contrary to prevailing stereotypes, in Anna Fifield's reported story Kim is anything but a madman — cold-blooded, for sure, but playing a calculated defensive strategy aimed at standing up his rule. 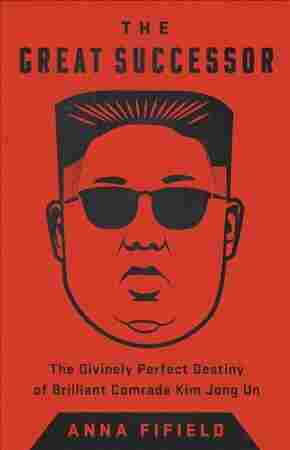 There are few world leaders past or present we know less about than North Korea's reclusive, nuclear-armed bad boy, Kim Jong Un.

Even Stalin was arguably less opaque. While guarded and secretive, the brutal Soviet strongman was at least recognized as one of Lenin's henchmen before muscling his way to the top.

By contrast, Kim's very existence was only officially acknowledged a few years before the death of his father, Kim Jong Il, in December 2011 after the elder Kim launched an 11th-hour scramble to ensure dynastic succession. At the time, no one was even sure of the new leader's exact age, let alone his agenda.

So, The Great Successor: The Divinely Perfect Destiny of Brilliant Comrade Kim Jong Un by The Washington Post's Anna Fifield — who has spent considerable time in North Korea both before and after the princeling Kim's ascent — is a welcome addition to the political literature.

Naturally, Fifield must rely on defectors and scant secondhand sources — among others, an aunt and uncle who cared for Kim Jong Un and his younger sister while they attended grade school in Switzerland under assumed names. To fill in the gaps in Kim's early years, the author also taps a retired Japanese sushi chef who spent 15 years in the service of the Kims, preparing them extravagant meals even as ordinary famine-stricken Koreans were, as widely reported, starving to death by the hundreds of thousands.

Fifield skillfully leverages what little information is available from these years with more gleaned recently — especially since North Korea's nascent rapprochement with the West. However, unlike a conventional biography, there isn't — and can't be — any real intimacy here. Through no fault of Fifield's, Kim is instead an object viewed from outside; a creature propelled along by events and his stage managers rather than living among humanity.

What emerges is a portrait of Kim fully in charge and consciously channeling his grandfather, North Korean founder Kim Il Sung, to bolster his legitimacy. Contrary to prevailing stereotypes, in this story Kim is anything but a madman. Cold-blooded for sure, but playing a calculated defensive strategy aimed at standing up his rule.

By Fifield's account, Kim is willing to loosen his grip just enough to placate the impoverished masses and the regime's wealthy oligarchs. At the same time, he has proved more ruthless than his father — dispatching potential rivals, such as his uncle and top regime adviser Jang Song Thaek, who was executed in 2013, and his half-brother, Kim Jong Nam, who was ambushed with a deadly nerve agent at a Kuala Lumpur airport three years later. The book also asserts unequivocally that Kim Jong Nam was a CIA informant, which had only been rumored previously.

Fifield offers us intriguing tidbits from Kim's childhood — there was the boy's ever-present obsession with basketball, particularly the Chicago Bulls, and family trips abroad under false passports to visit such sites as Tokyo Disneyland. Above all, we get a picture of isolation in Kim's formative years, with few playmates and an overwhelming, if not surprising, sense of entitlement.

'Great Successor' Warns Kim Jong Un Is A Threat, Not A Joke

'Great Successor' Warns Kim Jong Un Is A Threat, Not A Joke

Following his father's death, the new leader understood that his youth and inexperience, particularly in a culture that values age and wisdom, meant that he needed to move quickly to consolidate power, Fifield notes. The nuclear and missile programs started by his grandfather and nurtured by his father were kicked into overdrive. And once North Korea's ability to deliver these weapons to the shores of the hated United States proved sufficiently convincing, Kim was ready to pivot — "time for the cruel, threatening, nuclear-armed tyrant to begin his metamorphosis into misunderstood, gracious, developmental dictator," writes Fifield.

Kim's "charm offensive" that closely followed an alarming escalation of war rhetoric and personal insults traded by the regime and the serial tweeting President Trump was part of this attempt.

Kim understands that getting sanctions lifted, or at least eased, may be key to his long-term survival, Fifield writes. It's not that rank-and-file North Koreans have the capacity to revolt, but that the country's 0.01 percent, the technocrats who know the situation inside and outside of the country, need to be kept happy.

With the goal of trying to understand the U.S. president, "North Korean officials began asking former American officials to decipher Trump's tweets for them," Fifield writes. "They read The Art of the Deal ... They asked about the United States' nuclear attack protocol. They asked if Trump really had the sole authority to push the nuclear button."

By the time of the Singapore summit between Kim and Trump in June 2018, the North Koreans appear to have cracked the U.S. president's code — that flattery would get them everywhere. At the conclusion of the meeting, however, it was Trump who was publicly praising the North Korean leader, calling him "very smart," and a "very good negotiator" and admiring Kim's iron-fisted rule of the North, that he was "able to run it, and run it tough."

What more could a shy young dictator want?

Scott Neuman is a breaking news reporter and editor at NPR. He previously worked as an editor on The Associated Press' Asia desk in Bangkok, reported from Hong Kong for The Wall Street Journal, and was India bureau chief for United Press International.