Accessibility links
In 'The Enemy Of The People,' CNN Reporter Jim Acosta Recounts His Time Covering President Trump Jim Acosta comes across less like a reporter than a rival in his book — giving his side of the history of his interactions with the president and the legal battle to regain access to the White House.

In 'The Enemy Of The People,' CNN Reporter Recounts His Time Covering President Trump

In 'The Enemy Of The People,' CNN Reporter Recounts His Time Covering President Trump 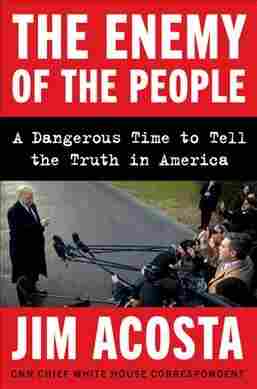 The Enemy of the People

A Dangerous Time to Tell the Truth in America

As the most visible reporter to regularly spar with the president, CNN White House correspondent Jim Acosta is a disputed icon.

President Trump has called Acosta a "rude, terrible person" and "fake news." To many on the right, he represents deep media bias; to some on the left, he represents media pushback against Trump's frequent lies. In his daily life, he is subject to near-constant abuse, insults and threats — along with some praise and a lot of selfie requests.

More telling, perhaps, than either the praise or the insults is a friendly interaction Acosta recounts in his new book, The Enemy of the People: A Dangerous Time to Tell the Truth in America.

Acosta was covering a Trump rally in South Carolina in 2018 when a Trump supporter came into the press pen and asked to borrow a chair. Acosta offered his, they had a pleasant chat and the man mentioned how odd it was to see Acosta reciting the pledge of allegiance and singing "The Star-Spangled Banner" at the rally along with everyone else.

"I thought to myself, Yes, I know the pledge and the national anthem. I'm an American," Acosta writes. "But the moment spoke volumes. Members of the press have been so savaged by Trump and his propagandists in the media that journalists seem almost foreign or anti-American to his supporters."

The Enemy of the People would have been a good place to ask why Trump has succeeded in this project. But Acosta used it as an opportunity to relitigate his spats with the White House rather than to meaningfully interrogate the cultural shift that left huge numbers of people despising and fearing the press.

In his most famous confrontation with the president, Acosta refused to cede the microphone to another reporter during a press briefing. An intern tried to take it, Acosta held onto it and the White House revoked his automatic access, while also publicizing a doctored video suggesting he had somehow pushed or hit the intern (he had not). A legal battle for access followed, and Acosta's pass was restored. The Enemy of the People gives his side of this fight, along with the history of his other interactions with the president, and how he has come to believe in fighting fire with fire.

In The Enemy of the People, Acosta sounds less like a reporter than a rival athlete: "We beat Trump!" Acosta remembers shouting after the lawsuit. Later, he writes, the "Trump people ... had clearly gotten spanked." The tone throughout is jocular and self-congratulatory. Describing a Trump confrontation, he writes that another reporter was "the real hero" of the news conference for defending Acosta, something you only say if you believe you are, in fact, the apparent and obvious hero.

"I don't believe reporters are supposed to be the story," Acosta writes. "That's how I was trained. But at that press conference, I had faced a choice: Do we just absorb Trump's attacks? Or do we push back and stand up for ourselves?" This feels like an artificial distinction. Reporters become part of the story when the president attacks them. But in between absorbing abuse and hitting back is another option: fighting for access, challenging the president on lies, and reporting the facts the way you would with any other story. Acosta seems to believe that the attacks give him special dispensation to offer his personal opinions, and that doing so is even an act of bravery or public service.

There is a difference between saying that Trump encouraged violence against protesters (fact) and referring to the "[t]oxic Trump effect on our national discourse" (opinion), or between saying that Sarah Sanders often attacks the press for accurate reporting (fact) and Sarah Sanders said "some of the vilest, most un-American stuff that has ever been said in the White House briefing room" (opinion). In other words, Acosta has become a commentator, not a reporter.

In a CBS interview over the weekend, Acosta spoke about the dangers of Trump's rhetoric about journalists. An angry Trump supporter mailed pipe bombs, Acosta explained, to CNN "and other Democratic targets."

"And other Democratic targets" was clearly a slip of the tongue: CNN is not affiliated with any party. Acosta meant perceived Democratic targets. But the mistake (which he has made before) is nonetheless telling. Acosta has allowed Trump to set the terms of engagement. Trump paints the media as the opposition, and Acosta has accepted the mantle without wondering what he might be giving up in return.

This is most apparent when he uses Trump's tactics to justify his own combativeness: "I don't recall Trump ever apologizing for his behavior," he writes at one point. "Hey, if they can do it, my thought was, why can't we?" he writes at another. But I can think of lots of reasons, starting with the use of the words we and they.