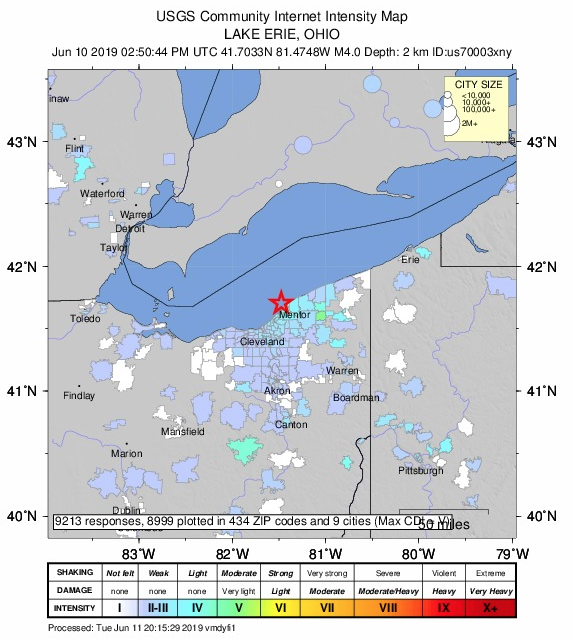 Residents in northeastern Ohio had a shaky start to their day as a 4.0 magnitude earthquake rattled the region on Monday morning, the U.S. Geological Survey confirmed.

The earthquake measured 5 kilometers (3.1 miles) deep and was centered under Lake Erie, just north of Eastlake, Ohio. Officials say there were no immediate reports of injuries. A natural earthquake occurs after stress builds up over time in the crust and eventually grows large enough to fracture the rock.

The Ohio Department of Natural Resources reports at least 200 earthquakes with epicenters in Ohio have been felt since 1776. Three areas in Ohio appear particularly susceptible to seismic activity — Shelby County and surrounding counties in western Ohio; northeastern Ohio, and southeastern Ohio. The northeastern area witnessed more than 100 earthquakes since 1836, many of them under Lake Erie offshore from Lake County.

Although the state is not considered a seismically active zone when compared with others like California, where the San Andreas Fault lies, it is not uncommon for earthquakes in Ohio to take place from time to time because of the number of cracks and faults.

"There are cracks in the Earth all over the world — Indiana, Illinois, Kentucky, Ohio, we all have ... slight movements all the time," David Saja, curator of mineralogy at the Cleveland Museum of Natural History, told NPR.

And although ruptures are recorded by seismometers, they are not always recognized by the general public. For example, northeastern Ohio "will experience anywhere below a 3.5 registered quake every couple of months," Saja said. "That's just below what the average person would be able to feel."

He added that a 4.0 magnitude earthquake, on the other hand, will shake Ohio once every 10 years. An earthquake of this magnitude can be felt indoors by many and outdoors by few during the day, according to USGS. It likely causes light to moderate damage, meaning items knocked from shelves, windows and doors disturbed and walls making a cracking sound.

The state Department of Transportation took to social media to share shaky footage from its highway cameras.

Did you feel that rumble this morning Cleveland? Well if you missed it, we caught this morning's earthquake on multiple #OHGO cameras. Check it out! #Clevelandreallyrocks pic.twitter.com/UjV60VlvpP

As of Tuesday afternoon, more than 8,900 residents said they felt tremors, most of which were detected in the Cleveland area. John Bellini, a geophysicist with USGS, told NPR the large number of responses received may be linked to the time of day and the fact that the area is highly populated.

"Everybody was awake and out and about so there's more people who were around to feel it," Bellini said. "In addition, in the Eastern U.S., the vibrations from an earthquake travel a farther distance than they do in, say, California, which has a lot of faults that can absorb some of that energy."

The northeastern Ohio seismic zone has had "moderately frequent earthquakes" since 1823, with the largest registering at magnitude 4.8, according to the USGS.