Accessibility links
Haiti Protesters Demand Resignation Of President Jovenel Moïse This scandal involves accusations that Haitian officials stole millions of dollars from a development fund. Port-au-Prince has been flooded with protests, and some have turned violent. 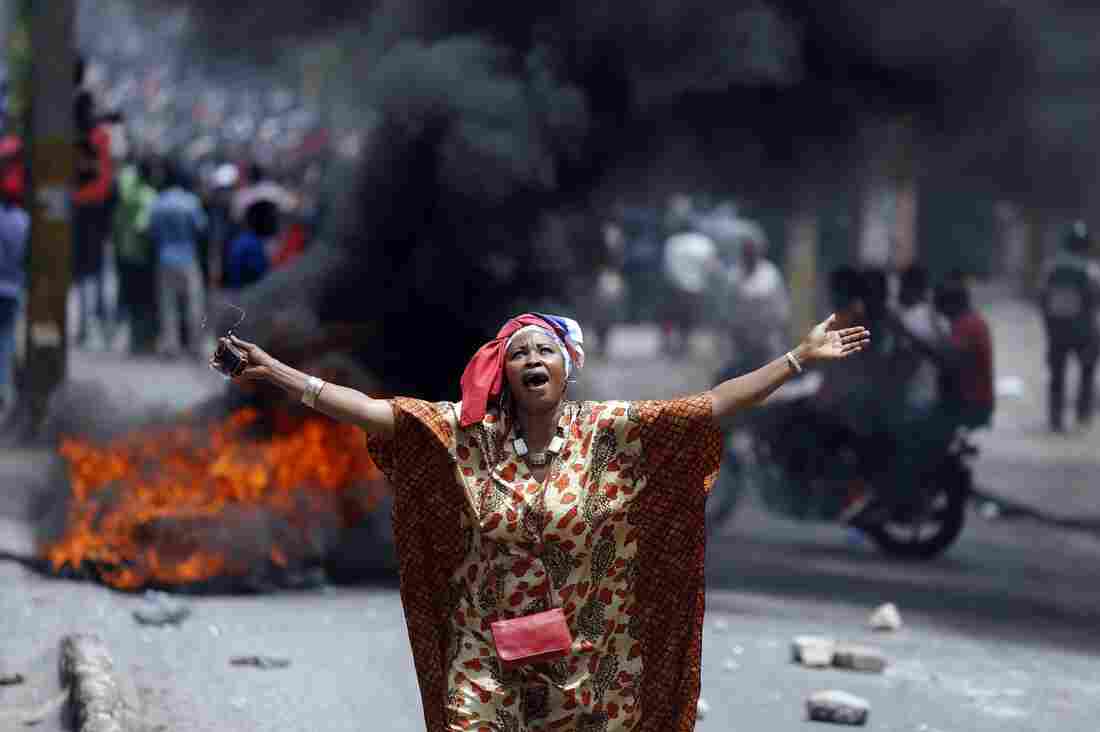 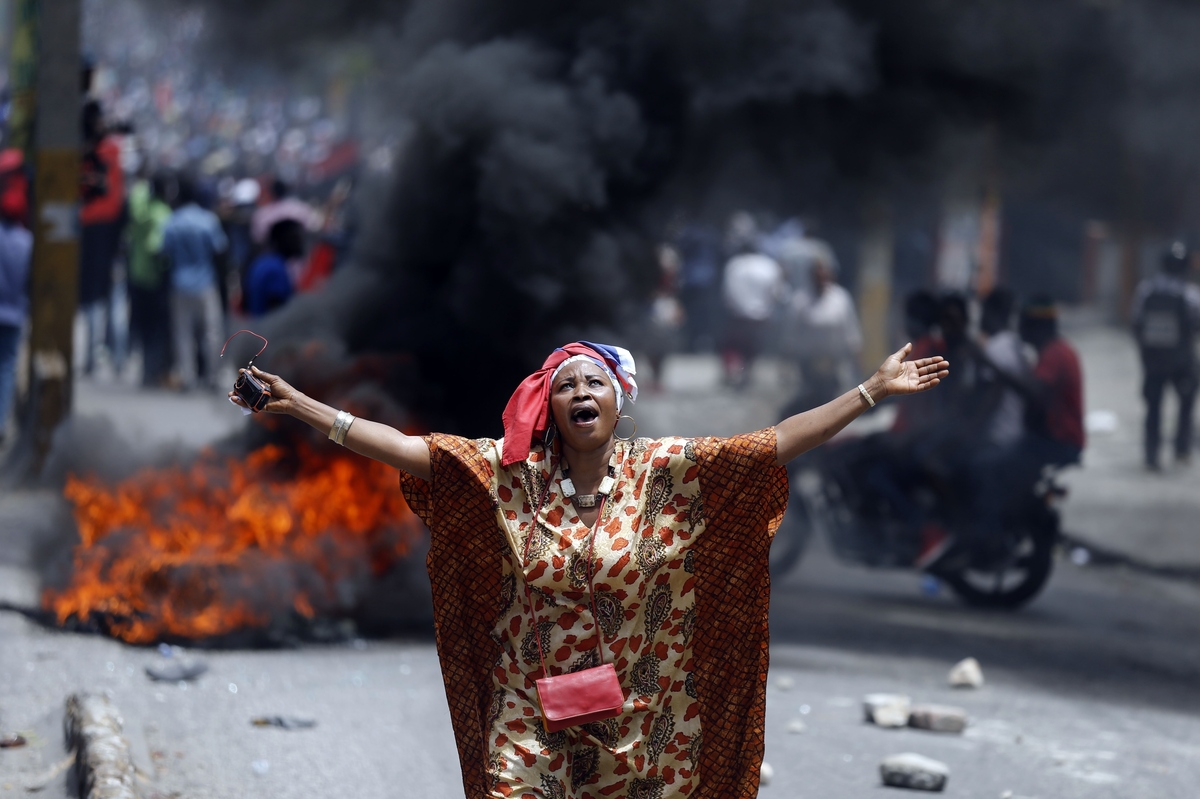 A protester yells anti-government slogans on Sunday at a demonstration in Port-au-Prince, Haiti.

Haitian President Jovenel Moïse is facing escalating challenges to his leadership after government auditors found even more evidence of large-scale corruption, ushering in days of street protests and strikes in multiple Haitian cities.

The capital Port-au-Prince has been flooded with protests, calling for the resignation of President Jovenel Moïse. Thick smoke from burning cars and tires filled the air, as protesters waved flags and faced off against security forces.

Late Monday, Rospide Pétion, a radio journalist from Radio Sans Fin, was shot dead by an unidentified gunman. The circumstances are not clear, The Associated Press reported, though he had "just finished a radio program in which he talked about corruption allegations against the administration of President Jovenel Moïse."

Opinion: Haiti's Troubles Must Not Be Forgotten

On Tuesday, Moïse described the journalist's death as an assassination and a "heinous act."

Other journalists were attacked amid the recent protests, according to the wire service. Security forces have been accused of using excessive force against protesters. 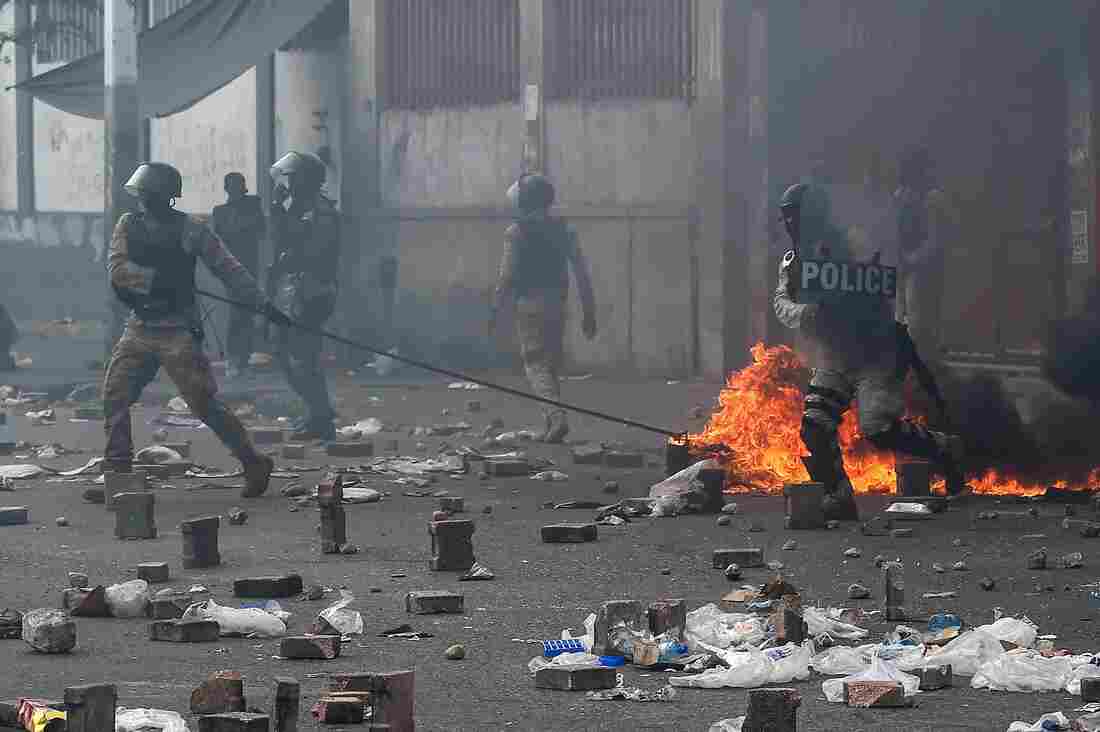 Haitian police officers clear the street of burning tires as protesters march during a demonstration against the government in Port-au-Prince on Sunday. Chandan Khanna /AFP/Getty Images hide caption

This scandal is centered around accusations that Haitian officials stole millions of dollars from a development fund subsidized by Venezuela that was intended to help low-income Haitians in what is believed to be the poorest country in the Western Hemisphere.

"Under the PetroCaribe program, Venezuela provided countries with oil, with payments deferred over 25 years at an interest rate as low as 1 percent," as the Miami Herald reported. "In Haiti, the savings from not having to immediately pay for the oil were designated for investments in roads, hospitals and social programs to help the poor."

But much of that money didn't make it to the poor. A panel of Haitian government auditors has released the second in a series of reports on the scandal, the Herald reported, and the more than 600-page document was submitted to the Haitian Senate on Friday.

It includes details suggesting that Haiti's current president received millions of dollars that had been intended for rehabilitation projects. In one notable example, the newspaper adds, the government paid twice for a rural road improvement project.

Moïse, who has previously denied the accusations, was elected in 2016. As protests ramped up in February over the PetroCaribe scandal, Moïse said in a speech that he "will not leave the country in the hands of armed gangs and drug traffickers."

Earlier this year, two Haiti researchers spelled out the economic difficulties the country is facing in an opinion article for NPR:

"The scandal is all the more jarring given Haiti's sharp economic and social disparities. Close to 60 percent of Haitians live below the poverty line of $2.41 a day. Two years ago, a bag of basic staples such as rice, beans, cooking oil and vegetables could be purchased for around $10. According to a monitoring system we set up back in 2004, the same basket of goods today is $19.60, almost double the price. The costs of everything from water and kerosene to transportation and school fees are soaring. Haiti's already unreliable electrical grid is falling apart: areas that once received a few hours of electricity a day are now going days or weeks without access to energy. Across the country shops and banks are closing."

The anti-corruption protests have led to school and bank closures. On Monday, the Herald reported, "lawmakers were unable to gather for the scheduled final National Assembly session because staffers were unable to report for work due to roadblocks, burning tires and stone throwing in the area."

The U.S. State Department is urging its citizens to "reconsider travel" to Haiti. "Protests, tire burning, and road blockages are frequent and unpredictable," the State Department said Tuesday.