Accessibility links
Democrats In Congress Introduce Gun Bill To Allow Victims To Sue Manufacturers The Equal Access to Justice for Victims of Gun Violence Act aims to repeal a 2005 federal law known as the Protection of Lawful Commerce in Arms Act, but it faces long odds of becoming law. 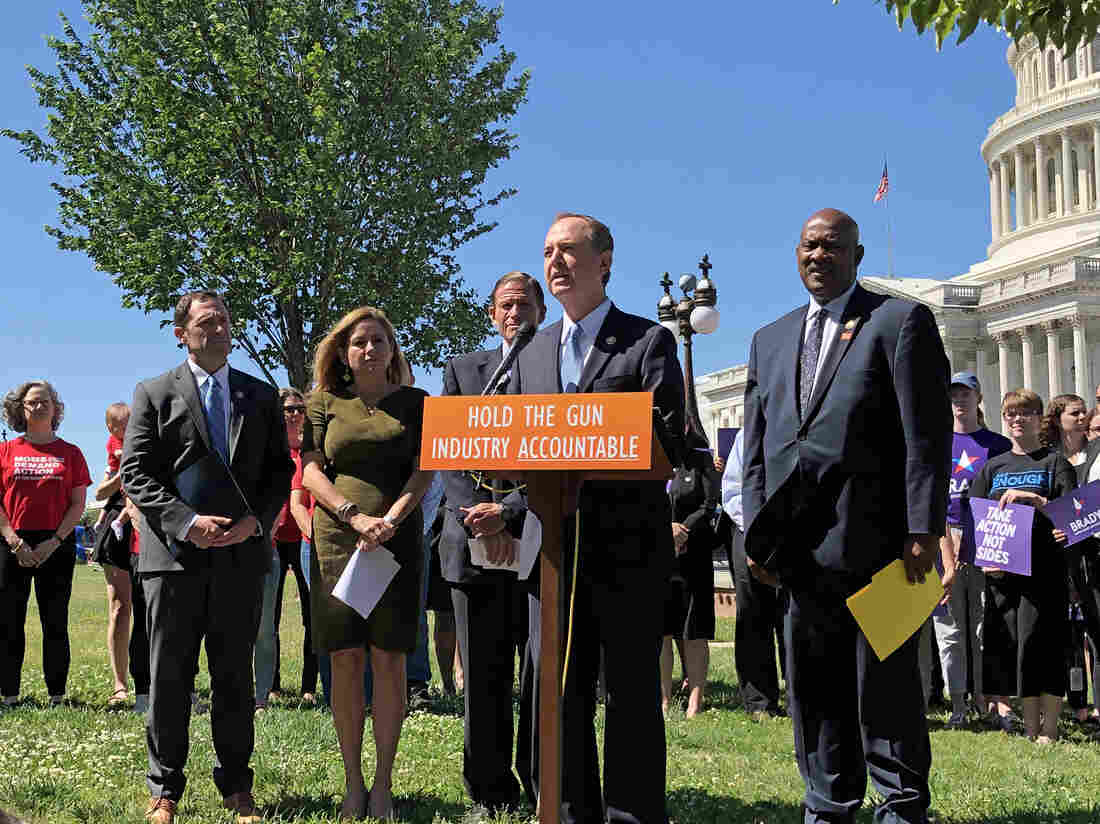 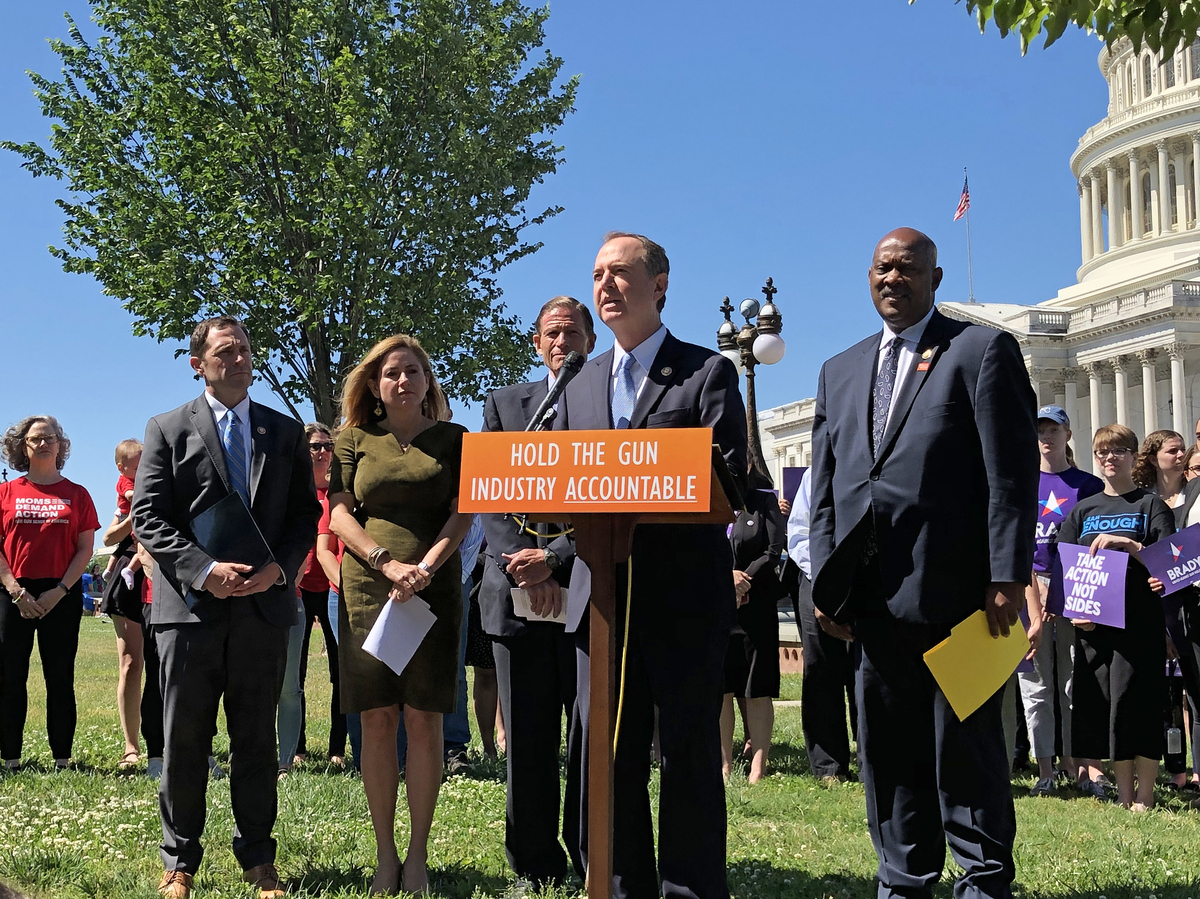 California Rep. Adam Schiff speaks at a news conference as Rep. Jason Crow of Colorado (from left), Rept. Debbie Mucarsel-Powell of Florida, Sen. Richard Blumenthal of Connecticut and Rep. Dwight Evans of Pennsylvania look on. The Democratic leaders introduced the Equal Access to Justice for Victims of Gun Violence Act on Tuesday.

House and Senate Democrats introduced legislation Tuesday they say will allow victims of gun violence to have their day in court.

The Equal Access to Justice for Victims of Gun Violence Act aims to repeal federal protections blocking firearm and ammunition manufacturers, dealers and trade groups from most civil lawsuits when a firearm is used unlawfully or in a crime.

Those protections date to 2005, with the passage of the Protection of Lawful Commerce in Arms Act.

Rep. Adam Schiff, D-Calif., one of the bill's co-sponsors, said since PLCAA became law, state and federal courts have "dismissed numerous cases against the gun industry," adding that other cases were likely not brought at all.

Schiff, surrounded by members of gun violence prevention groups including Moms Demand Action, Brady and March For Our Lives, said the purpose of the legislation was to "correct the error Congress made" nearly a decade and a half ago.

"Responsible actors in the gun industry don't need this limitation on liability. And the irresponsible ones don't deserve it," Schiff told reporters at the announcement of the bill.

PLCAA was signed into law by then-President George W. Bush and championed by the gun industry, including the National Rifle Association.

Lawrence Keane of the National Shooting Sports Foundation, a firearms trade association, told NPR his organization "will certainly oppose this legislation." He called the bill to repeal PLCAA "fundamentally unfair."

"You would no more charge or blame Ford or General Motors for drunk driving accidents," Keane said, adding that the current law is "working exactly how Congress intended it."

Keane and other supporters of the current law say it was passed as a way to ensure that manufacturers, dealers and distributors had protections from what they call "frivolous" lawsuits intended to bankrupt the gun industry.

"All we're doing through this proposal is giving victims of gun violence their day in court," said Sen. Richard Blumenthal, D-Conn., a co-sponsor of the Senate version of the bill. "Every other industry has to pay punitive damages if it intentionally and purposefully violates [a] standard of care" toward the community.

"That will provide a powerful incentive as it has done in tobacco, in automobiles, in pharmaceutical drugs, for safer products," Blumenthal added.

In March, the Connecticut Supreme Court overturned a lower court decision, ruling that Remington Arms could be sued under state law by the families of victims from the Sandy Hook Elementary School shooting.

The court said that Remington, the manufacturer of the rifle that was used in the 2012 attacks in Newtown, Conn., could be sued on the basis of how the company marketed the military-style weapon to civilians. 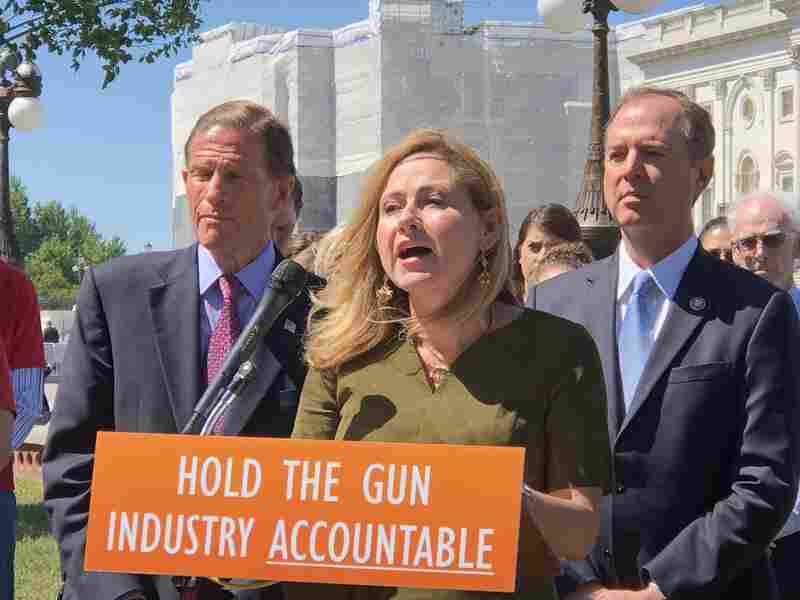 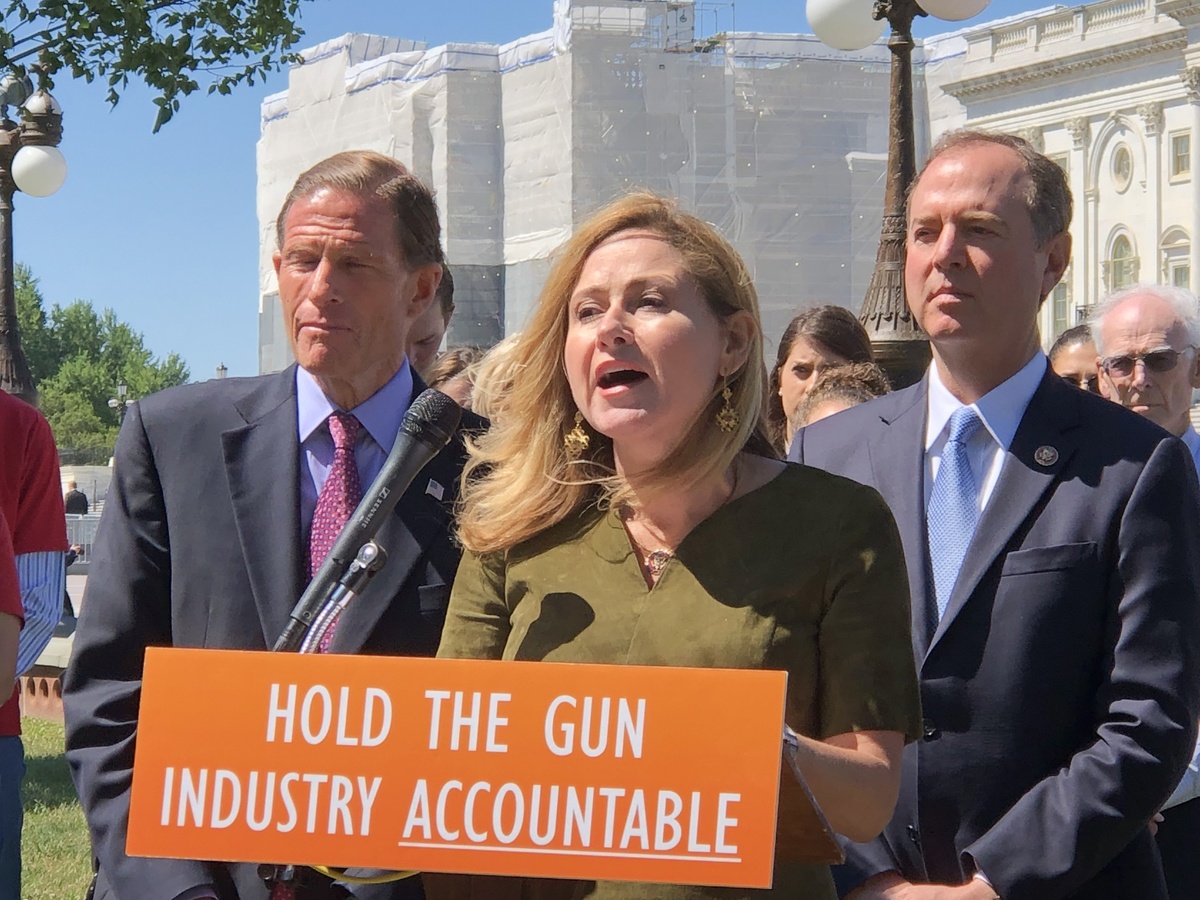 Mucarsel-Powell speaks at the news conference with Blumenthal (left) and Schiff.

Blumenthal on Tuesday called it a "narrow victory for the Sandy Hook victims," adding that it allows families to "go back to the trial court and seek to prove their case. It was by no means a total victory for them."

The effort to repeal PLCAA by Democrats on Capitol Hill is not new.

Schiff first introduced the measure in 2013, and it has been reintroduced at least two other times without gaining traction.

Democratic lawmakers said momentum is now on their side, pointing to polling that shows 90% of Americans support universal background checks.

Supporters of the new PLCAA repeal also say that the NRA is in a far weaker position now than it was in 2005 because of recent allegations of financial mismanagement; investigations into the group, including one by the attorney general of New York; and inquiries by House Democrats looking into links between NRA officials and individuals with ties to Russia.

"It is a new day in Congress," said Rep. Debbie Mucarsel-Powell, D-Fla., who highlighted that Wednesday is the third anniversary of the mass shooting at Pulse nightclub in Orlando, where 49 people and the shooter died.

"We will not stop, regardless of the Senate majority leader [Mitch McConnell R-Ky.] ignoring the pleas of the American people."

A previous version of this story incorrectly referred to Newtown, Conn., as Newton.