Accessibility links
House Passes Contempt Resolution To Pursue Lawsuits In Trump Inquiries The chamber sidestepped what might have been an even uglier showdown with the executive branch but opened the door to years of litigation over Russia, taxes, security clearances and more. 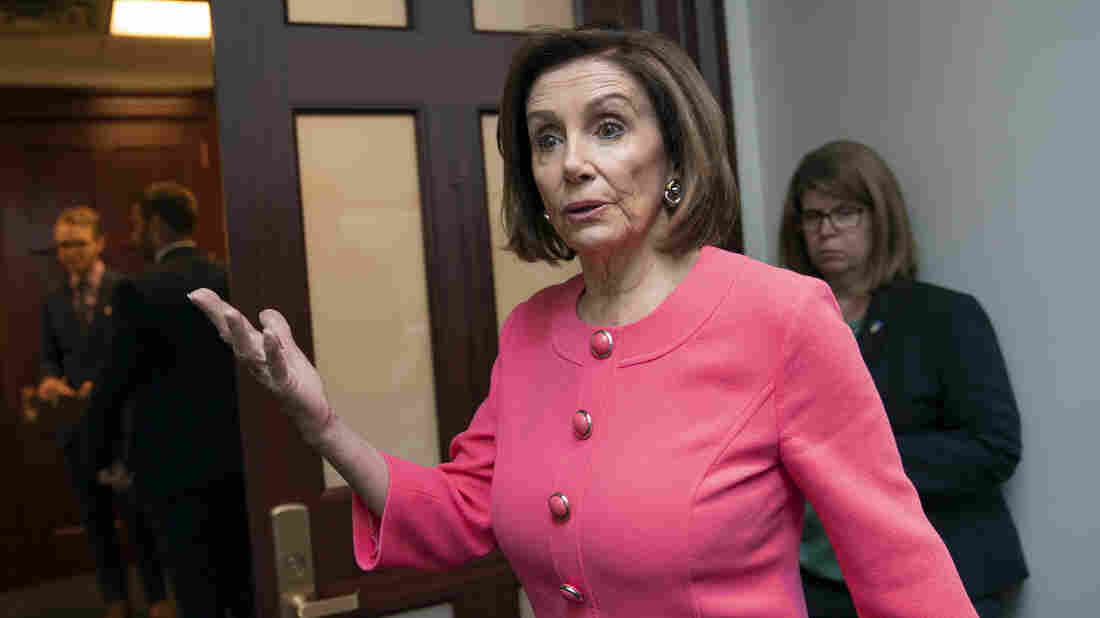 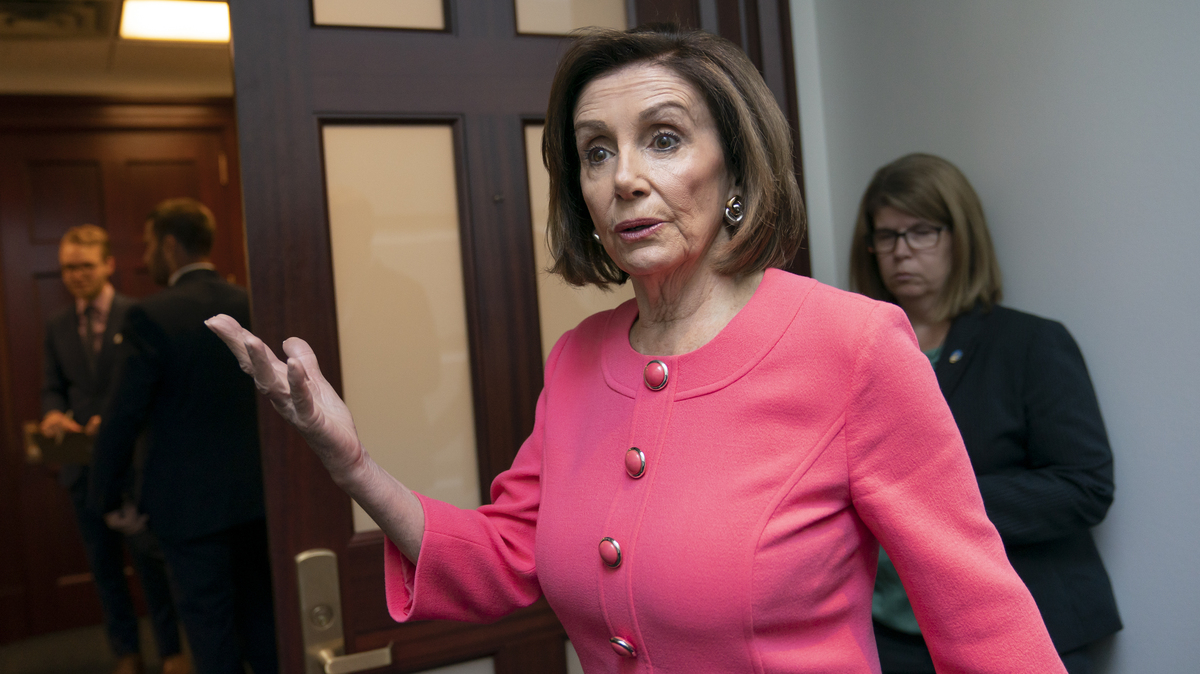 The House, led by Speaker Nancy Pelosi, D-Calif., voted to authorize lawsuits in pursuit of materials related to the special counsel's Russia investigation.

The House has authorized its committee leaders to pursue civil contempt cases to get information for their myriad investigations into President Trump.

Although the vote, 229-191, clears the way for more lawsuits against Cabinet departments, administration officials, bankers, accountants and more, it represented a sidestep from a more aggressive partisan confrontation that might have been.

Barr would have been only the second attorney general so censured and the rare sitting Cabinet member rebuked in that way. Instead, the resolution that passed on Tuesday simply permitted civil lawsuits against him and McGahn.

All the same, Democrats welcomed what they called a clear path forward to break through what they've called the "stonewalling" by Trump about his finances, business practices and the administration.

"We simply cannot tolerate a posture from the president of the United States ... of noncooperation — of absolute, comprehensive, wholesale defiance of the will of a Congress trying to seek information," said Rep. Jamie Raskin, D-Md.

Raskin described the variety of investigations the House has undertaken, including those in search of Trump's taxes, information about his business practices, his decision to overrule staff objections in the issuance of security clearances, information about the 2020 census and more.

House Speaker Nancy Pelosi, D-Calif., addressed her colleagues during the debate on the resolution.

"We must follow the facts and uncover the truth for the American people," she said.

The cases identified specifically in the measure passed on Tuesday were those of Barr and McGahn, although House Judiciary Committee Chairman Jerry Nadler, D-N.Y., said he plans to hold off on filing any suit against Barr for now.

A department spokeswoman welcomed the agreement and Democrats' decision to take a contempt censure for Barr off the table.

But Nadler said he hasn't ruled out suing Barr down the line if the Justice Department doesn't continue to play ball.

Several other Democrats may decide to file their own lawsuits.

The resolution passed on Tuesday was co-sponsored by the leaders of the House's committees on oversight, foreign affairs, judiciary, ways and means, intelligence and financial services.

The goal — as Rules Committee Chairman Jim McGovern, D-Mass., said in a hearing of his panel on Monday — is for the House to both investigate and keep its calendar clear enough to legislate: "To walk and chew gum at the same time," McGovern said.

Republicans, meanwhile, derided what they called the majority's latest political stunt. The legislation isn't even necessary, as the House Judiciary Committee's ranking member, Doug Collins, R-Ga., said on Monday, because the Justice Department is giving Nadler what he wants.

Moreover, Collins and other Republicans said, Democrats are at sixes and sevens trying to sustain the Russia imbroglio long past the point at which Washington and the country have moved on. 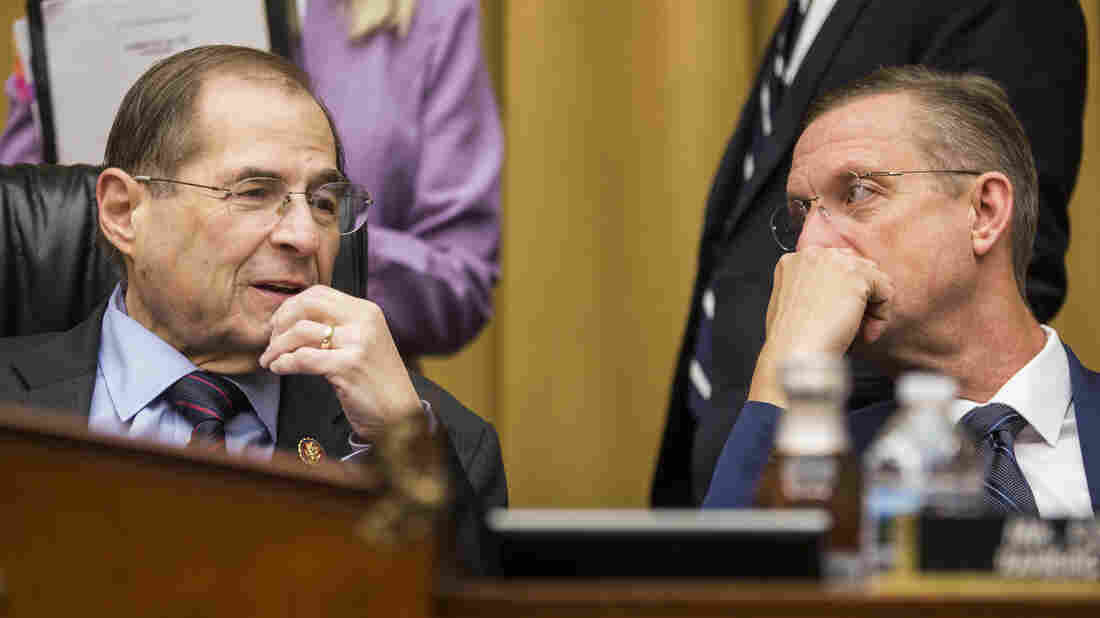 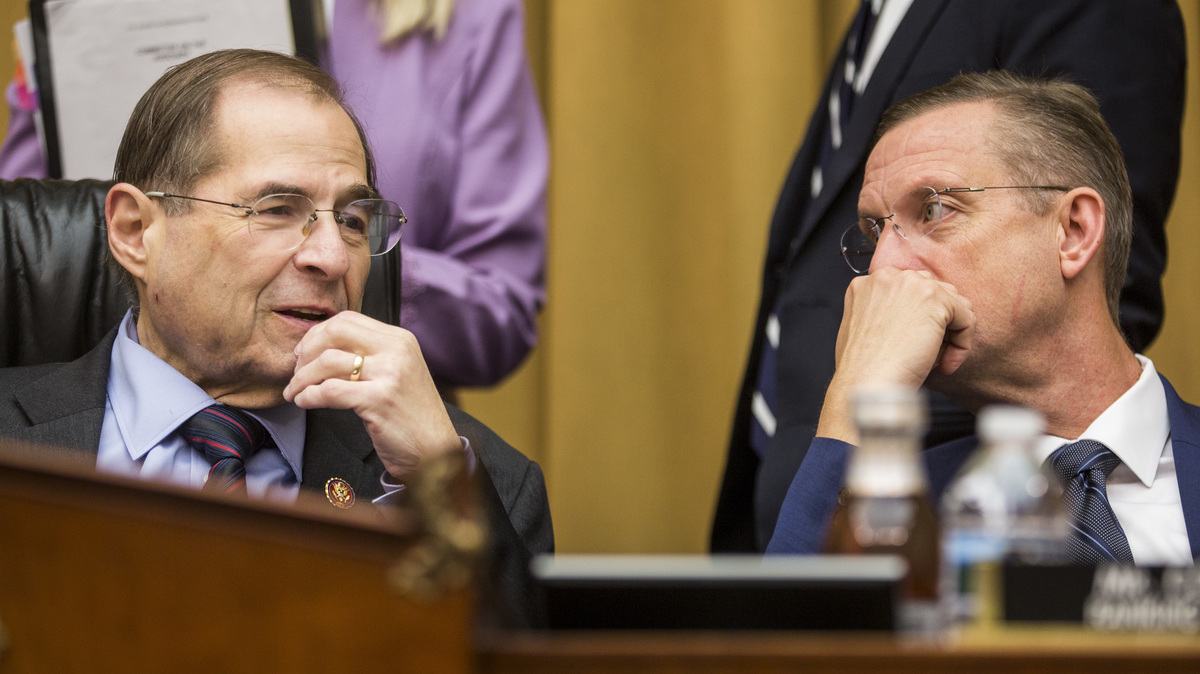 Special counsel Robert Mueller's investigation is complete, and he has stepped down, several Republicans observed — Congress should be focused on border security and other issues, including the attack on the 2016 election that the special counsel's report documents, Collins said Tuesday.

Rep. Tom Cole, R-Okla., also said the priorities set by Democrats rest on a basic misunderstanding about the power dynamic within Washington.

That means the Trump administration can't drop everything and accede to partisan fishing expeditions, Republicans say. The president cooperated with Mueller, they say, including with witness interviews and documents.

Nadler and his majority not only are trying to drag out that process for political reasons, Cole argued — but are doing so despite the cooperation they've begun to receive from Barr and the Justice Department.

Democrats' Dilemma: Would Pushing For Mueller To Testify Hurt Or Help?

Collins also called Democrats' legal arguments weak and said they could wind up hurting their own cause if they don't find favor with judges in court.

"This is a novel, untested and risky proposition," he said. "These tactics weaken the House."

Cole agreed that by taking these cases to court, members of Congress are risking decisions in which they might lose — and that could cost future lawmakers their ability to investigate.

"I strongly urge the majority to continue working with the Justice Department and the House to find a resolution to these issues without a knee-jerk lawsuit that may damage the House as an institution," Cole said.

Chairmen and chairwomen plan their approach

The leaders of key committees told reporters after the vote on Tuesday that they intend to make use of their newfound authority.

The next milestone could take place on Wednesday, when the House Oversight Committee is scheduled to vote on contempt for Barr and Commerce Secretary Wilbur Ross. Chairman Elijah Cummings, D-Md., hasn't gotten information he wants about the 2020 census, and he said Congress must stand its ground.

"We're here in a fight for the soul of our democracy," he said.

The political backdrop for the House vote on Tuesday was the dispute among Democrats about how to respond to Mueller's findings.

A minority of the majority wants to initiate an impeachment investigation into Trump on the belief that the special counsel documented obstruction of justice by the president.

Most House members don't agree, and neither does Pelosi, who at an event earlier on Tuesday repeated that most of her members are not pushing to begin the process of ousting Trump.

Asked whether the speaker has a duty to hold the president accountable in view of Mueller's findings, apart from the political considerations, Pelosi said her duty was to make the House majority the most effective at whatever it does.

Impeachment, she said, isn't "off the table," but she appeared to remain cooler than the most fervent members and much of the Democratic Party's more liberal faction.

Most Americans do not support impeachment, so Pelosi has been trying to strike a balance between showing that she hears her most anti-Trump supporters and retaining the ability to reach out to more moderate Americans in the 2020 election.

The investigations that Democrats will be freer to pursue following Tuesday's vote are seen as an internal compromise — one that enables them to try to uncover as much as they can about Trump for use as political ammunition, while stopping short of impeachment.

Republicans generally continue to back the president. Trump specifically also continues to enjoy support in the GOP-controlled Senate, which would be unlikely to vote to remove him in the event of an impeachment proceeding.