Accessibility links
Conservationists Protest New Airport Near Machu Picchu Ruins The government is banking on more tourism after it replaces the outdated airport in Cuzco with a gleaming new facility near the mouth of the Sacred Valley. And that's what conservationists fear. 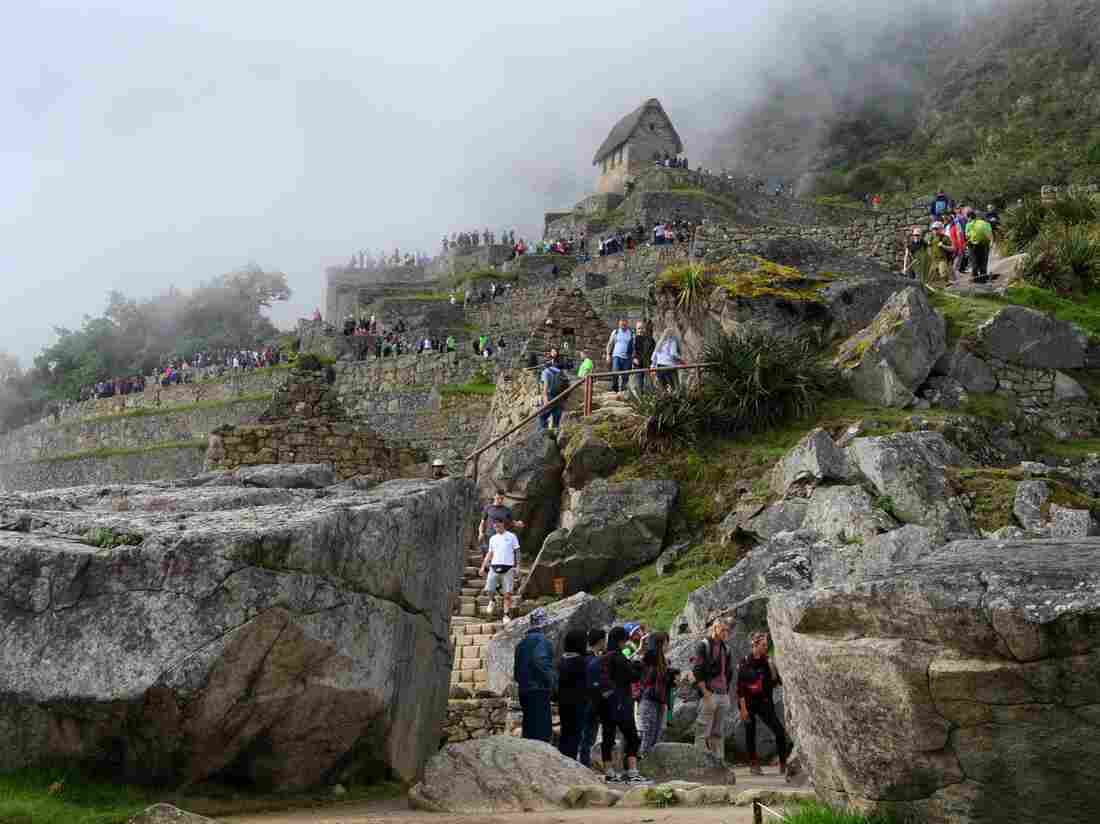 Tourists visit the Machu Picchu complex, the Inca fortress in the southeastern Andes of Peru in April. The government hopes a new airport will attract more tourists to the ancient site. That draws opposition from conservationists. Pablo Porciuncula Brune /AFP/Getty Images hide caption 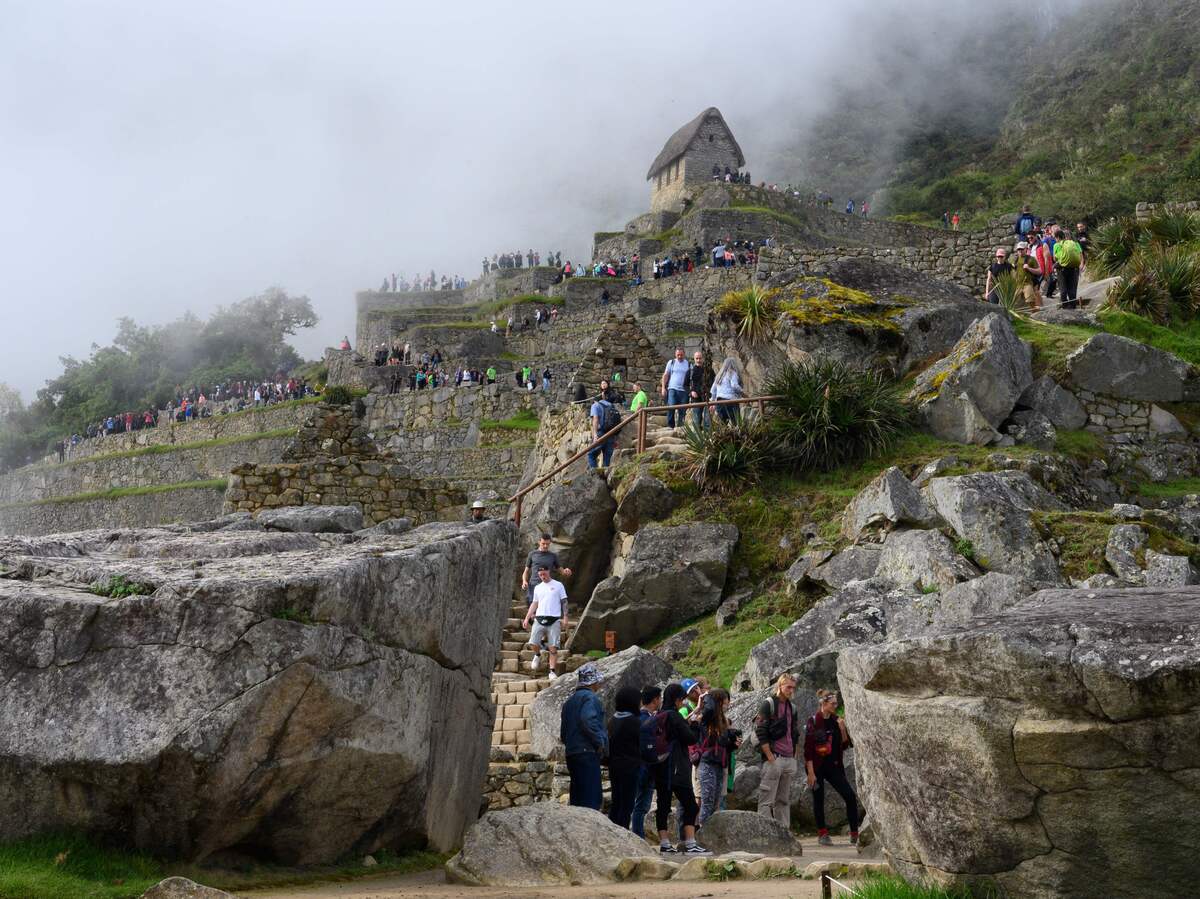 Tourists visit the Machu Picchu complex, the Inca fortress in the southeastern Andes of Peru in April. The government hopes a new airport will attract more tourists to the ancient site. That draws opposition from conservationists.

After decades of deliberation and planning, the Peruvian government has broken ground on a multibillion-dollar airport expected to connect Machu Picchu, the country's historical jewel, more easily with the outside world. But conservationists are outraged over the potential impact of a massive, state-of-the-art international facility on the ancient site and surrounding rural communities.

The Inca marvel, designated as a World Heritage site by UNESCO, was built in the 15th century in the misty peaks of the Peruvian Andes. On average, about 1 million people a year visit to take in the mountaintop citadel, which remains challenging to reach. Replacing the outdated airport in Cuzco, about 75 miles from Machu Picchu, would change that by allowing direct international flights into the heart of Peru's tourism industry.

Construction on the controversial Chinchero International Airport began earlier this year. Bulldozers are clearing the site at the mouth of the Sacred Valley to make way for a gleaming new structure that is expected to become the nation's second-largest and most modern hub, accommodating more than 7 million passengers per year.

Abel Traslaviña, a Peruvian archaeologist and Ph.D. student in Vanderbilt University's Department of Anthropology, says the airport poses an irreversible threat to the already fragile ruins and surrounding areas.

He is one of nearly 50,000 people, including archaeologists, historians and anthropologists, who have signed an online petition launched by art historian Natalia Majluf urging President Martín Vizcarra to block plans for the airport and find it a new home.

"The airport planned to be built in Chinchero, Cusco, endangers the conservation of one of the most important historical and archaeological sites in the world," the petition says. "An airport in the surroundings of the Sacred Valley will affect the integrity of a complex Inca landscape and will cause irreparable damage due to noise, traffic and uncontrolled urbanization."

Traslaviña described the outskirts of Cuzco and the picturesque Inca town of Chinchero as an unspoiled landscape. Ancient terraced pastures, dotted by small huts that are occupied by llama herders, stretch between the two districts, he told NPR. The local economy relies almost entirely on tourism, textile production and farming.

"The Royal Road, called Capac Ñan, is not a site protected by UNESCO, but it is like a massive landscape," Traslaviña said of the 500-year-old path that has been considered "the grandest engineering achievement of the pre-Hispanic Americas."

For conservationists, the terraces themselves are archaeologically significant, as are the stepped granite roads that connect them. Opponents also say the new plane routes would lead to low-passing flights over Ollantaytambo, site of another centuries-old Inca city.

According to Traslaviña, technical surveys of the region by the Ministry of Culture omit the existence of at least four similar roads crossing through the area. They also fail to note nearby lagoons, terraces and wildlife that would be affected by the construction, he said.

But government officials dispute these arguments.

Following reports by The Guardian about ongoing protests against the president in May, Vizcarra said years of research have gone into limiting any negative environmental impacts.

A number of studies and evaluations were conducted over the past 15 years, Vizcarra told reporters. "This is not an improvisation," he exclaimed, adding, "The Chinchero Airport moves ahead!"

Government officials have assured the public they are approaching the project "with transparency and with the highest-quality standards."

Minister of Transportation Edmer Trujillo said the process is adhering to construction laws.

They also argue the airport is a necessity that cannot be put off any longer. Hotelier Juan Stoessel, who is also vice president of Cuzco's tourism agency, told El Comercio that the existing airport there is "poorly located within the city, impossible to be expanded and will reach its limit of operations in three or four years."

Traslaviña is baffled by that logic, maintaining that Machu Picchu already teeters on the verge of chaos, overrun by too many tourists. While it was built by the Incas to occupy fewer than 1,000 people at any given time, in 2016 more than 1.4 million people climbed its steps.

It has been years since the government increased the number of daily maximum visitors to more than double the number recommended by UNESCO.