Accessibility links
NPR Review: 'Song For The Unraveling Of The World,' By Brian Evenson Brian Evenson's new collection brings together stories that have appeared in literary fiction, speculative fiction and horror publications — and yet they flow together into a disturbing whole. 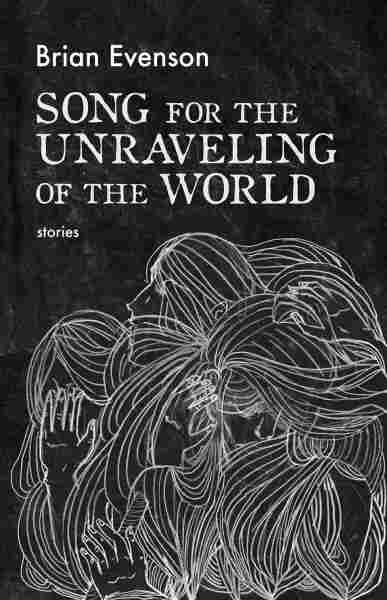 Song for the Unraveling of the World

"No matter which way we turned the girl, she didn't have a face."

The opening line of "No Matter Which Way We Turned," the first story in Brian Evenson's newest collection, Song for the Unraveling of the World, is a celebration of weirdness that sets the tone for the rest of book. Song contains 22 stories culled from a wide array of literary fiction and horror publications as well as speculative fiction anthologies. And while the collection has a surprising sense of cohesion, the variety of genres, topics, and styles prove that Evenson is one of our best living writers — regardless of genre.

This book could have been called Collected Paranoias. Every narrative manages to disturb the reader, to instill a sense of danger, a permeating feeling of confused anxiety. Nothing is what it seems, and there's always either something missing that should be there, or something where there should be nothing. In "Born Stillborn," a man deals with two therapists who may or may not be brothers — and may or may not be real. In "Leaking Out," a creature that shouldn't be absorbs a man. And in "The Second Door," language mutates imperceptibly as a brother and sister in an impossible place drift apart and morph into something new, capturing the sense of strangeness that unifies the collection:

After a while — we had by then lost track of not only the day but also what month exactly it was — I realized that my sister had begun to speak in a language I could not understand. I cannot mark a moment when this change occurred. There must have been a period when she'd spoken it, or some mélange of English and this new tongue, and I, somehow, didn't notice, responding instead to her gestures or to what I thought she must have been saying. But then something, some sound, a clatter of metal falling, caught my attention and I looked for the tin or the pan that had been dropped and realized the sound was proceeding from her mouth.

More than a discussion of individual stories, Song for the Unraveling of the World demands a thematic approach. For example, there are three stories dealing with movies. "Room Tone" follows a moviemaker obsessed with capturing the right background sound at any cost. In "Line of Sight" a small detail becomes a maddening element in an otherwise perfect film. And in "Lather of Flies" film and death are entwined in a finale that asks readers to start reading the book all over again. Similarly, matters of space, like in "Leaking Out" and "Sisters," a strangely touching tale of ghost siblings, abound. These cohesive elements make Song feel like it was written all of a piece, instead of put together from previously published stories.

The level of attention to detail present here reinforces the idea that this is a whole instead of a collection. In "Smear" an astronaut can see "a smear, semitransparent but certainly present" that eventually leads to death. Then, in "Glasses," a woman gets a new pair of glasses and sees something "large and formless, very dark, inky" when she puts them on. The glasses lead to two disappearances. In the story that follows, "Menno," glasses disappear in the first paragraph. This level of interconnection is hard enough, but Evenson pulls it off here with a variety of wildly different stories that go from space exploration gone wrong and post-apocalyptic mutations to dreamlike encounters and tales as straightforward as "A Disappearance," a crime narrative about a jealous man murdering the woman who left him.

This book could have been called 'Collected Paranoias.' Every narrative manages to disturb the reader, to instill a sense of danger, a permeating feeling of confused anxiety.

The beauty of Song for the Unraveling of the World is that nothing in its pages is accidental. From the order of the stories to the rhythm with which the unifying elements appear, Evenson is always in control. In fact, there is a level of self-awareness here that occasionally jumps out at careful readers and barrels at the fourth wall, abruptly stopping an inch before breaking through, somehow delivering a message while remaining within the context of the story:

But this is not that kind of story, the kind meant to explain things. It simply tells things as they are, and as you know there is no explanation for how things are, at least none that would any difference and allow them to be something else.

Song is a skillfully crafted, cleverly executed, and extremely entertaining collection. There are science fiction, literary, crime, surreal, and horror stories in here and so I wouldn't call it just a scary book. Instead, I'd call it something that's harder to achieve: deeply unsettling. Evenson has carved out a space between the weirdness of Jeff VanderMeer and the short-form brilliance of Diane Williams by writing fiction for adults that tickles the backs of our necks, the same way good scary stories did to us in our childhoods.