Accessibility links
Immigration: Inland Checkpoints Feel The Strain As Migrant Surge Persists "They're making a run at us every day," says one Border Patrol agent who runs a checkpoint an hour's drive north of the U.S.-Mexico border. 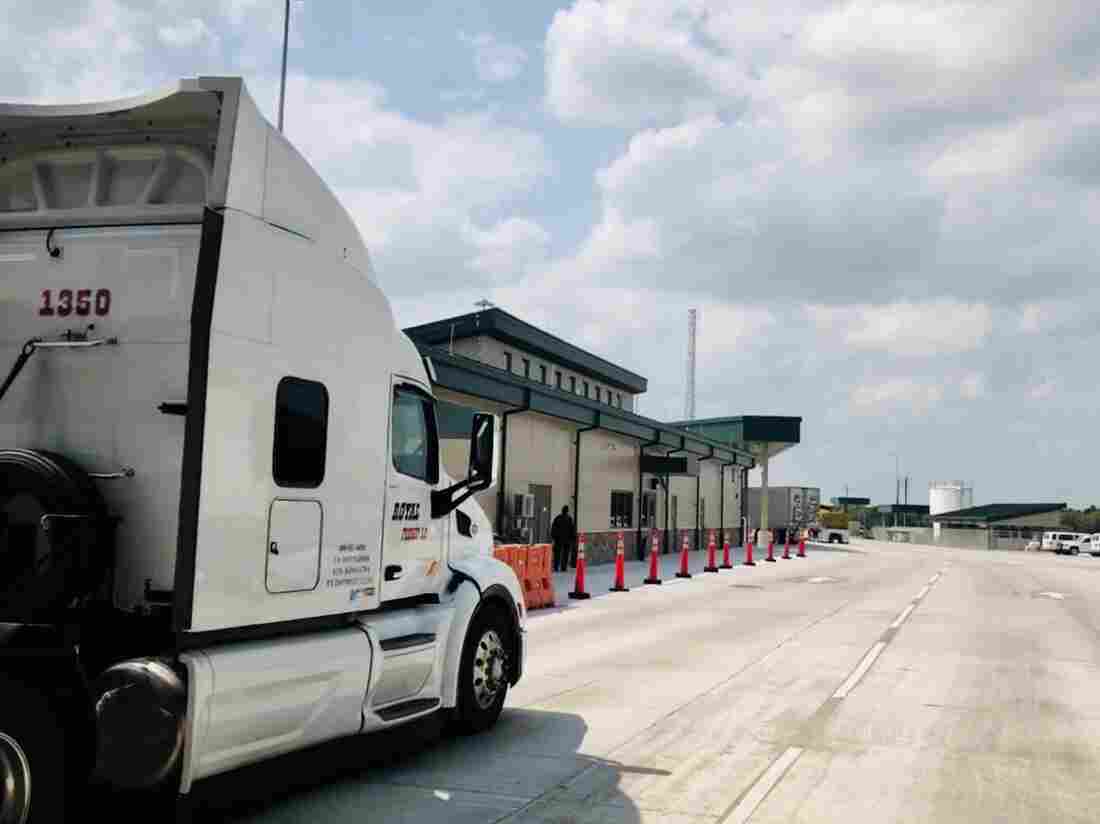 The Border Patrol's Falfurrias checkpoint in Texas, one of 34 inland checkpoints near the U.S.-Mexico border, is the agency's largest and busiest. Eric Westervelt/NPR hide caption 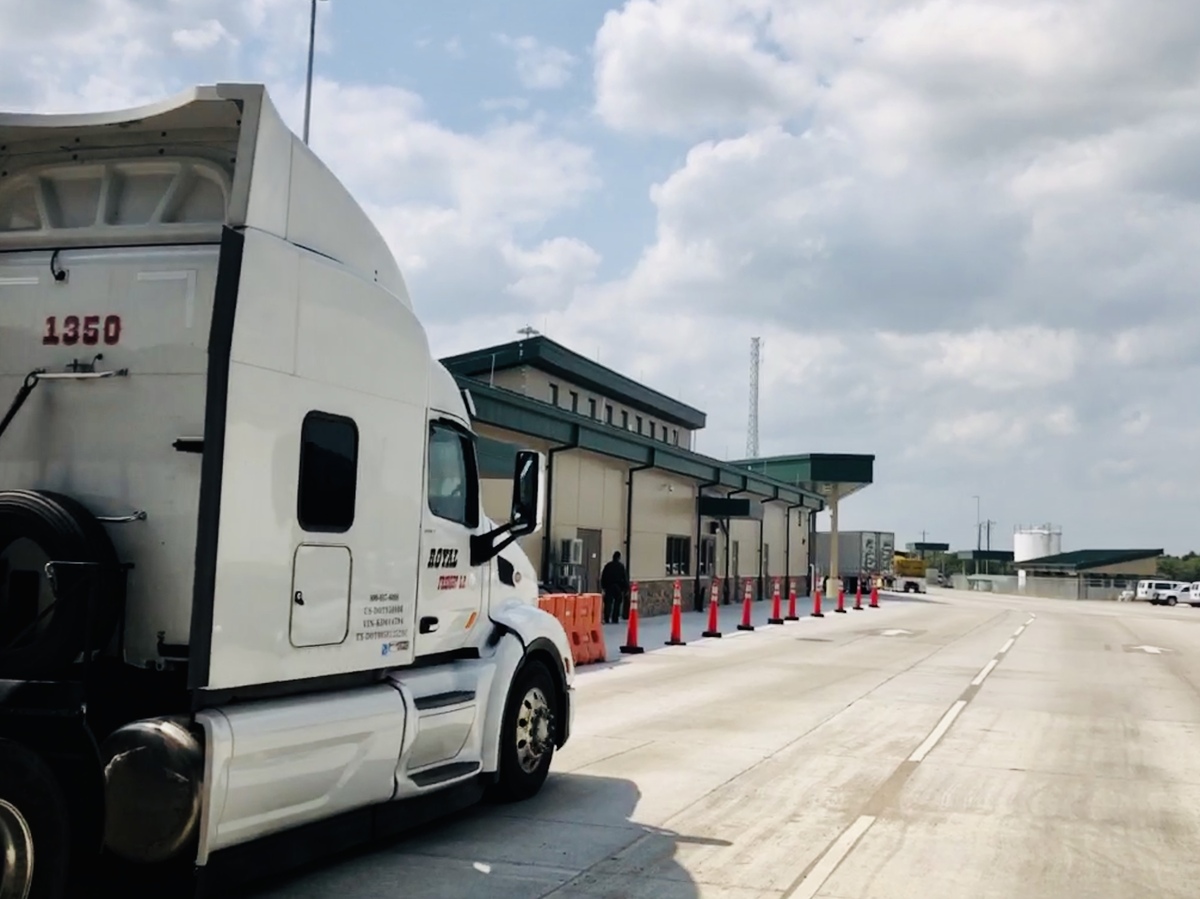 The Border Patrol's Falfurrias checkpoint in Texas, one of 34 inland checkpoints near the U.S.-Mexico border, is the agency's largest and busiest.

The surge of Central American migrants crossing into the U.S. isn't just taxing border agents and the nation's immigration system — it's straining interior checkpoints like one on Highway 281 in Texas.

An hour's drive north of the U.S.-Mexico border, the new and expanded Falfurrias checkpoint is on a major route for traffickers shepherding people or drugs north.

"They're making a run at us every day," says Border Patrol agent Tom Slowinski, who's in charge here. "No other checkpoint anywhere on the Southwest border catches more alien smuggling cases than this checkpoint right here."

But that mission is being stretched by what's happening at the border, says Slowinski. He has spent 34 years with the Border Patrol. He has seen it all: migrants crammed into trunks and drugs hidden in hollowed-out car batteries or dolls.

But he's not sure he has seen this much strain on staffing and resources.

Falfurrias is one of 34 permanent inland checkpoints near the Southern border, and several have been closed or left short staffed as agents are shifted to the border to process the influx of migrants. 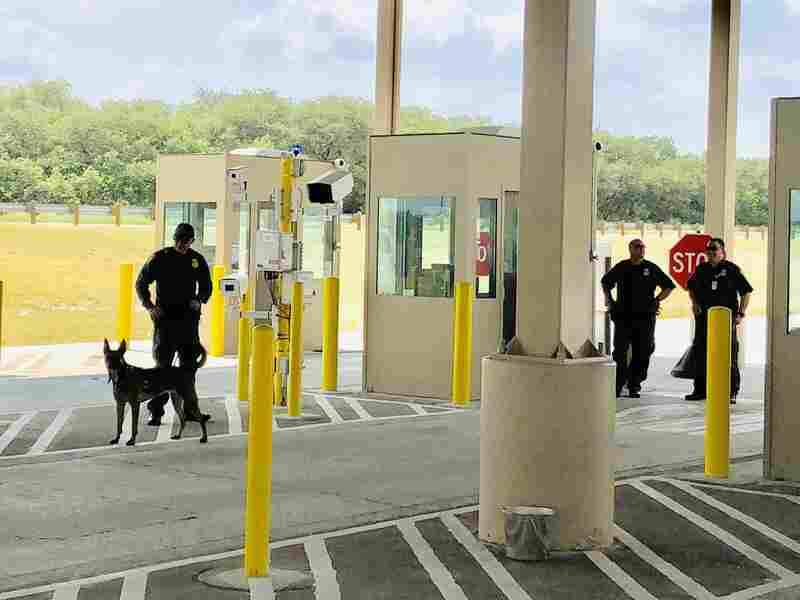 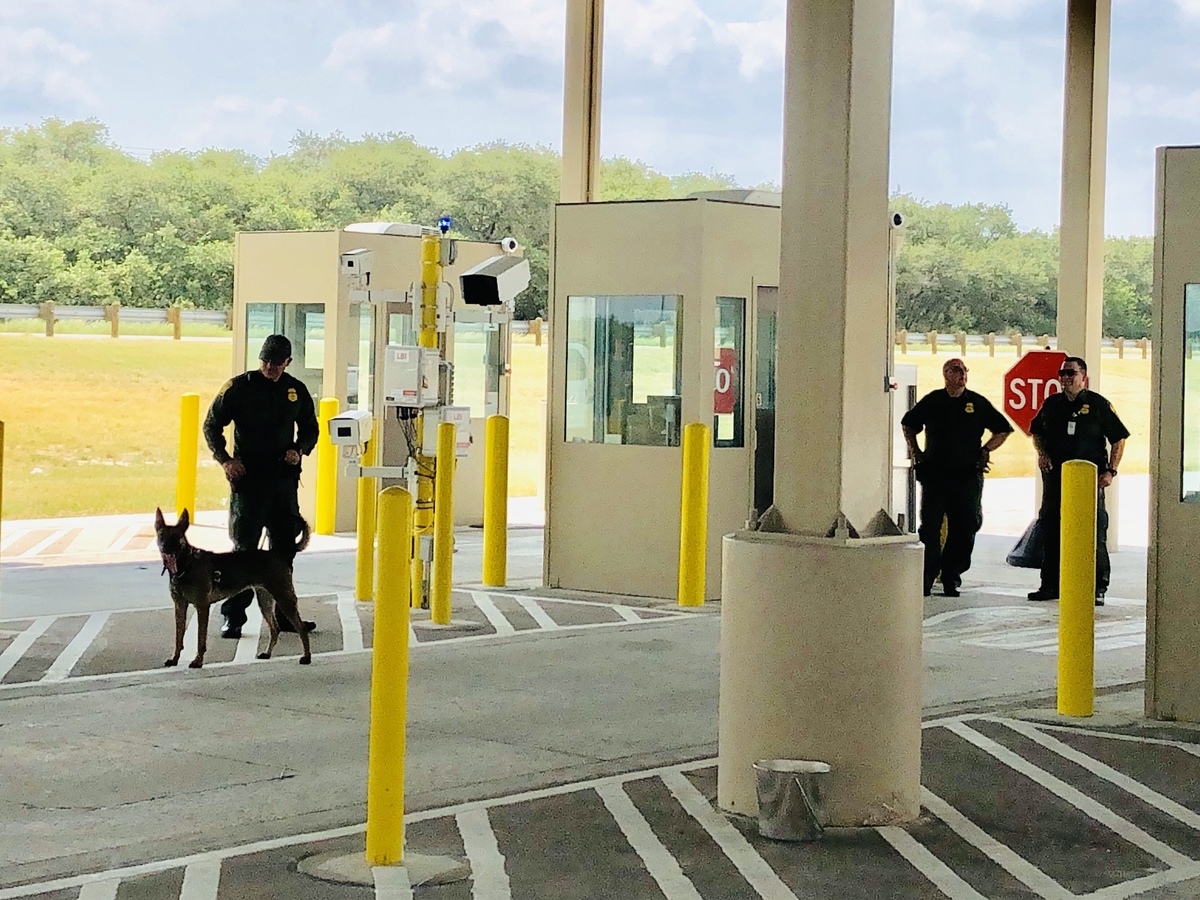 Border Patrol agents with a sniffer dog at the new and expanded Falfurrias checkpoint.

More than 144,000 migrants — many of them Central American families fleeing poverty and violence — were taken into custody after crossing the border last month. The situation has bedeviled the Trump administration, which hopes an agreement recently struck with the Mexican government will start to stem the flow of asylum-seekers.

Slowinski wouldn't release his checkpoint's staffing numbers, citing security, but said Falfurrias has had to give up personnel to help out at migrant intake and processing stations to the south.

This year, Customs and Border Protection closed six interior checkpoints in the El Paso sector, which includes all of New Mexico, to move more agents to the border. They remain shuttered.

One New Mexico county has declared a state of emergency over the temporary closures. Locals say the closures are prompting an influx of illegal migrants and drugs, but New Mexico's governor says there isn't any evidence of an emergency. 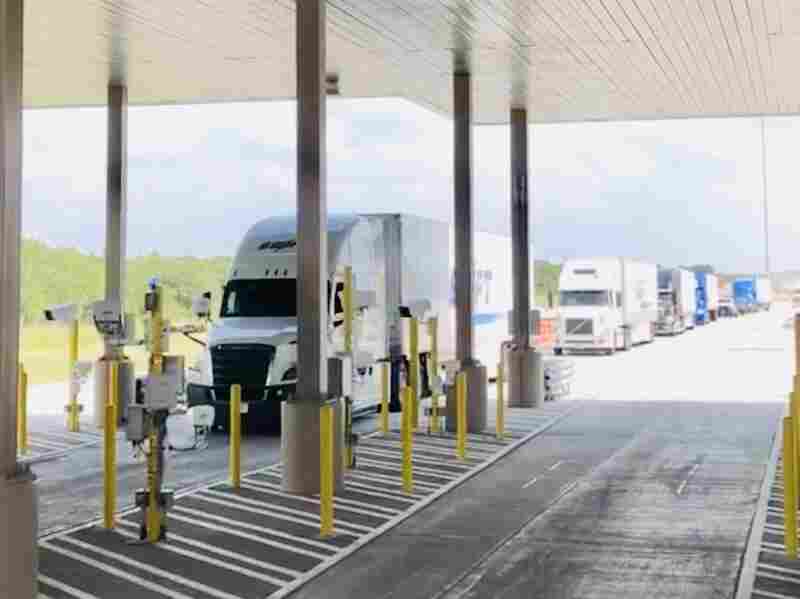 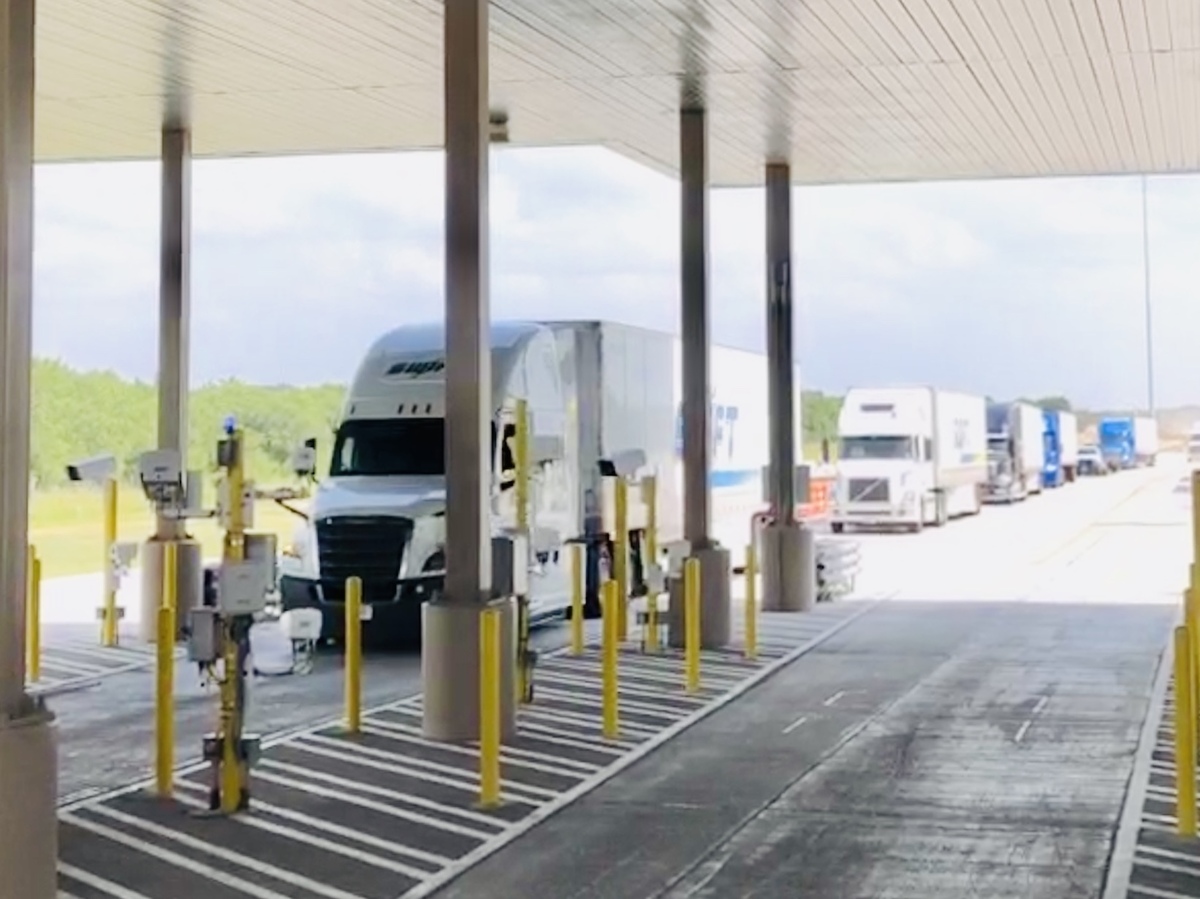 Trucks await screening at the Falfurrias checkpoint, 60-plus miles north of the border.

In Texas, Highway 281 is the central artery out of the Rio Grande Valley and north toward San Antonio, Austin and other interior cities. On a recent visit to the Falfurrias checkpoint, workers were still painting walls in parts of the new checkpoint while construction crews dismantled the old one a few hundred yards away.

Here, every truck or car is met by an armed green-shirted agent who asks about your citizenship. "You know, tell me where you were born," Slowinski says. "We're here to determine citizenship and legal status of all the occupants and all the vehicles that are northbound through our checkpoint."

Agents are also on the lookout for illegal drugs. The new checkpoint has more drug-detecting dogs and new state-of-the-art technology to detect contraband or people.

Falfurrias is the first interior checkpoint to deploy a drive-through vehicle-screening system called a Z Portal. It's a "combination of drive-through X-ray portal and radiation detection. This checkpoint is set up high capacity, high volume, high capability," Slowinski says.

The Drug Enforcement Administration coordinates with Customs and Border Protection on investigations at border crossings and inland checkpoints. Typically, DEA agents are called in whenever drugs are discovered. DEA officials say they, too, have felt an indirect impact from the shifting of Border Patrol resources south.

"Seizures of methamphetamine, heroin, cocaine and fentanyl have increased," says Will Glaspy, the DEA special agent in charge of the Houston Division.

And, Glaspy says, the increase in hard drugs couldn't come at a worse time, as these inland checkpoints are now a little more vulnerable. He oversees a giant slice of southern Texas, including the majority of the state's border with Mexico.

"Anytime you don't have those there as a second line of defense — a linebacker, if you will — some illegal contraband is going to make it into the United States that these checkpoints would pick up," Glaspy says.

Glaspy says there's anecdotal evidence that Mexican drug cartels are taking advantage of the influx of migrants. While border agents are busier than ever processing people, he says, the cartels are seizing an opening to send more meth, fentanyl and heroin north, mostly through established ports of entry.

"It's kinda hard to quantify a negative, but on many occasions all they're simply doing is divert the attention of the Border Patrol agents and then run narcotics in an area behind the agents," Glaspy says.

"Frustrating, yes, because there's a system in place, and the Border Patrol's aspect of that now is really getting crushed with the influx of migrant families coming through South Texas," he adds.

President Trump has long pressed for extra funding for border protection and a giant border wall to stop migrants and drug smugglers. Experts and the DEA say most drugs are transported through official ports of entry on the border, not through where Trump says a border wall would stop them.