Accessibility links
NASA Engineers Try To Remedy Stuck Probe On Mars An instrument on NASA's Mars InSight mission that was supposed to be driven into the planet's soil is stuck. It's designed to measure Mars's internal temperature.

An instrument on NASA's Mars InSight mission that was supposed to be driven into the planet's soil is stuck. It's designed to measure Mars's internal temperature. 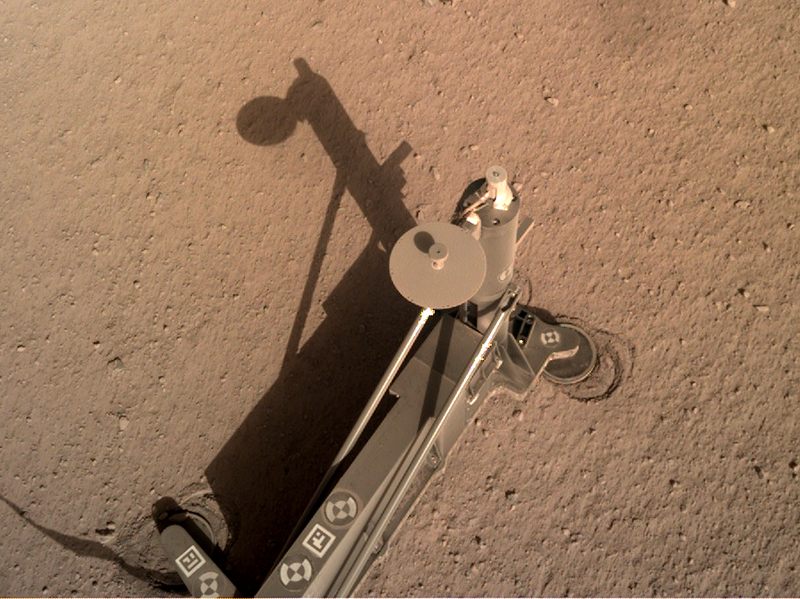 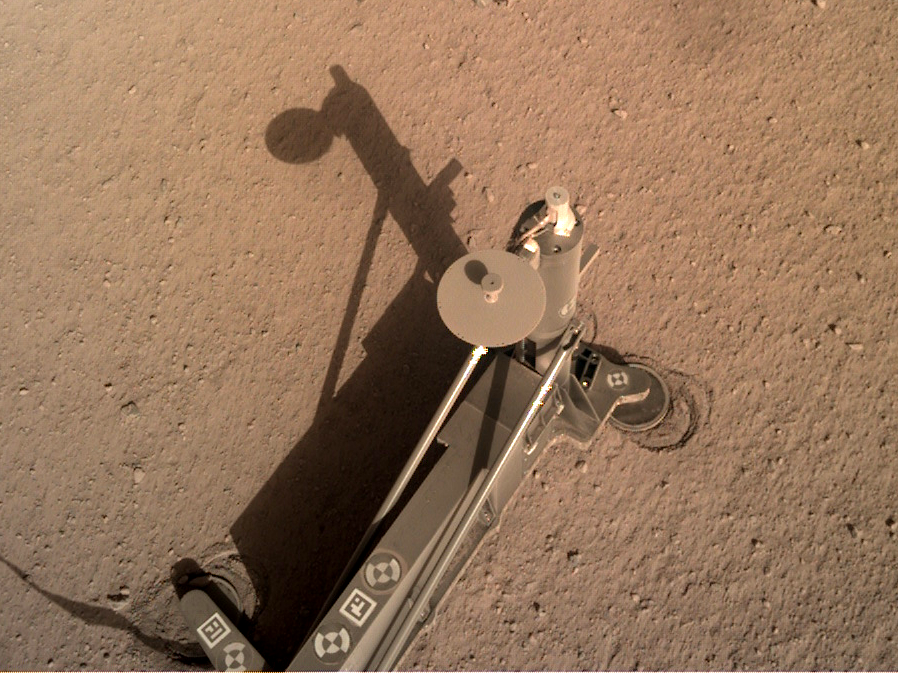 Support structure for the thermal probe called "the mole."

There's a mole stuck in the ground on Mars - not the small, furry animal but a probe on NASA's Mars InSight lander called the mole. It's a probe that was supposed to go 15 feet beneath the Martian surface, but it got stuck after only going one.

JOE PALCA, BYLINE: The mole is, basically, a tube with a kind of internal pile-driving mechanism so it can pound itself into the ground. Its job is to measure the heat flow coming from the interior of Mars. At the end of February, InSight's mission managers commanded the mole to begin its descent.

TROY LEE HUDSON: It was after that first attempt that we saw we didn't make it to our initial target.

PALCA: Troy Lee Hudson is a scientist and engineer at NASA's Jet Propulsion Laboratory in Pasadena. He says a support structure was used to start the mole on its downward journey. But now...

HUDSON: The support structure is in our way. It's preventing us from getting a clearer visual picture of the mole and the soil surrounding it.

PALCA: So Hudson says they're going to use the InSight lander's robotic arm to pick the structure up.

HUDSON: Very slowly and carefully and place it on the ground elsewhere so that we can then see and interact directly with the mole and the soil around it.

PALCA: If all goes well, the arm will start moving the support structure out of the way later this week. Scientists chose InSight's landing site because they thought it had soil they could penetrate. But they still had to make some assumptions about what conditions would be like. Jose Andrade is a soil engineer at Caltech.

JOSE ANDRADE: The amount of information and understanding that we have from these materials is very limited under Martian conditions.

PALCA: Martian conditions include a lower gravity and less atmospheric pressure than there is here on Earth. And even here on Earth, Andrade says predicting how sand will behave when you try to pound a stake into it is surprisingly hard.

ANDRADE: When you look at a grain of sand, it looks simple, innocent. But when they get together, they gang up. And they become extremely complex.

PALCA: It could be the soil conditions on Mars were even more complex than the mole's designers had thought.

We incorrectly say mission managers plan to move a support structure out of the way this week. They're actually planning to do it sometime later in June.