Accessibility links
5-Year-Old Dies In Uganda As Ebola Spreads From Democratic Republic Of The Congo Uganda's Ministry of Health says the dead boy's brother, 3, and grandmother, 50, also tested positive for Ebola. The 5-year-old and his mother had been in Democratic Republic of the Congo days ago. 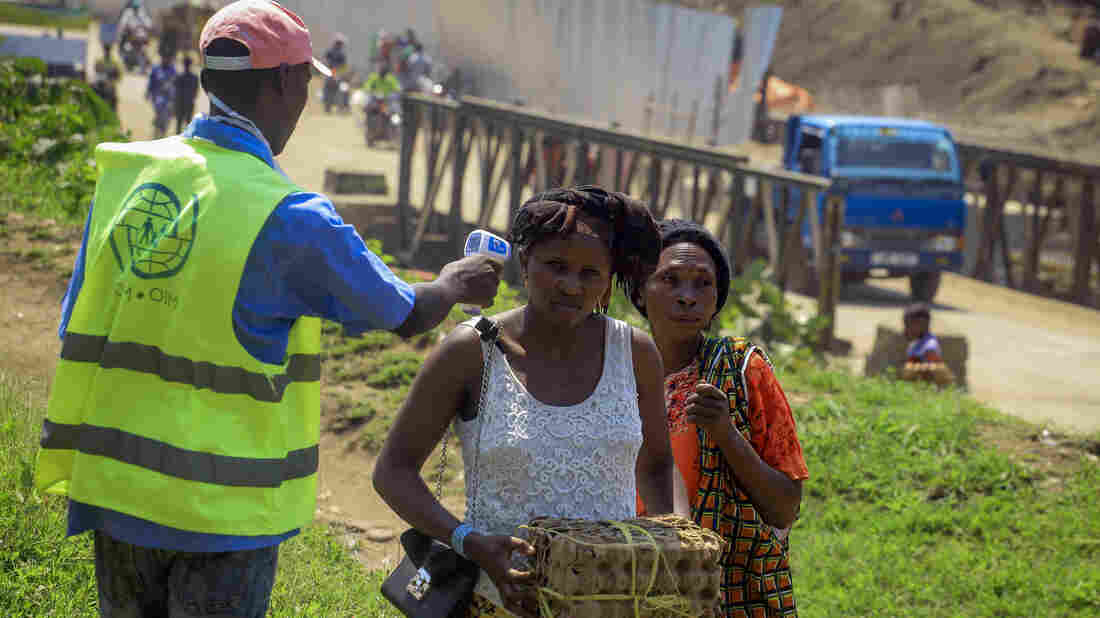 Uganda has reported its first death from Ebola. Here, a health worker takes a woman's temperature at a border crossing between Uganda and Democratic Republic of the Congo, part of an effort to screen for Ebola and prevent its spread. Al-hadji Kudra Maliro/AP hide caption 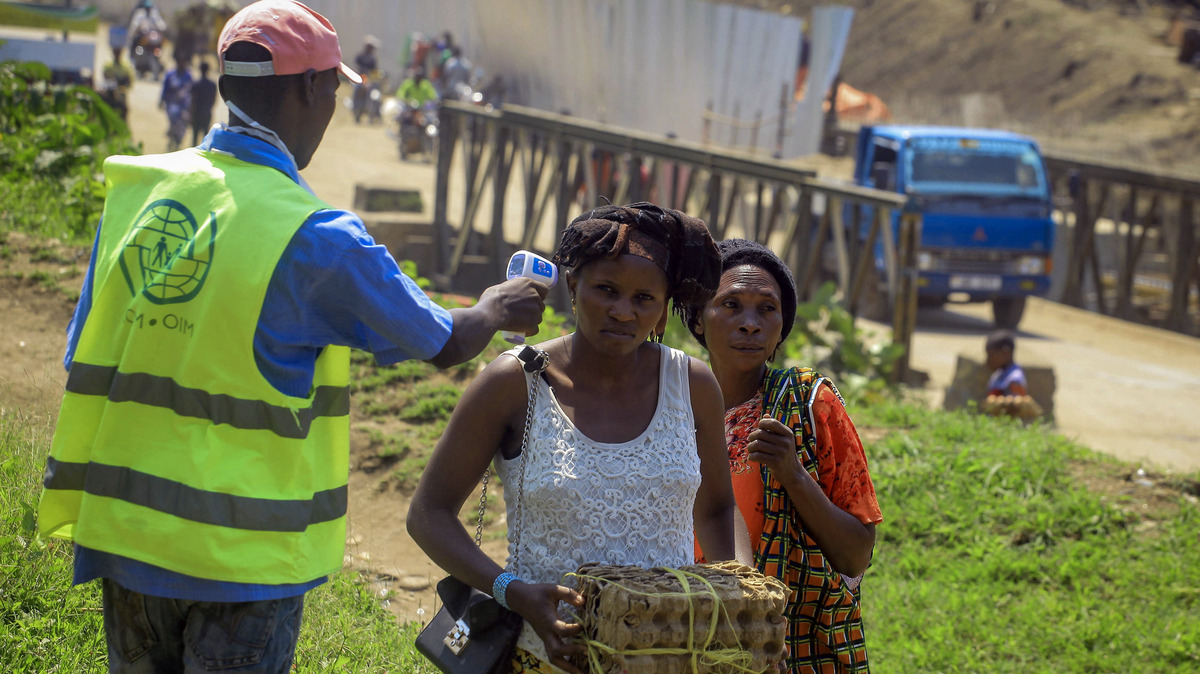 Uganda has reported its first death from Ebola. Here, a health worker takes a woman's temperature at a border crossing between Uganda and Democratic Republic of the Congo, part of an effort to screen for Ebola and prevent its spread.

A 5-year-old boy who was diagnosed with Ebola died Wednesday in Uganda, health officials say, and the boy's younger brother and grandmother are also sick. They are the first confirmed cases of Ebola to spread beyond the large outbreak in the neighboring Democratic Republic of the Congo.

Uganda's Ministry of Health says blood tests show the deceased boy's brother, 3, and grandmother, 50, have tested positive for Ebola. Both are showing symptoms of the disease, from muscle pain and headache to vomiting blood, according to the ministry. The two patients are now being cared for under isolation at the Bwera Hospital Ebola Treatment Unit.

Just days ago, the 5-year-old boy and his mother had traveled from DRC to Uganda. "Eight contacts have been listed and are currently being followed up," Charles Olaro, the ministry's director of clinical services, says in a news release about the tragic developments.

The new patients are in western Uganda's Kasese District, across the border from hotspots in the DRC's Ebola outbreak. That outbreak has grown steadily since it began late last summer, and for months there have been concerns that the virus would spread to Uganda or other neighboring countries.

In that area of the border, "there is a lot of movement for various reasons including business, seeking medical and social services," the World Health Organization's office in Uganda says. The agency adds that before this week, they had sent 50 blood samples in suspected cases to be tested for Ebola — and that while none of those tested positive, the 51st sample did.

Nearly 1,400 people are confirmed or believed to have died from Ebola in the DRC during the current outbreak, according to WHO figures released Monday. In all, there are nearly 2,100 confirmed or probable cases there.

"The World Health Organization says it's shipping extra supplies to Uganda and has put a special committee on standby to determine whether to declare this outbreak an international emergency," NPR's Jason Beaubien reports.

In an effort to prevent the disease from spreading in Uganda, the country's health ministry says it will start a "ring vaccination" of all contacts to the new cases on Friday, in an effort that will include the World Health Organization. Some 3,500 doses of the vaccine have been shipped to the country, officials said.

"All passengers coming in from DRC will be screened," the ministry said in a tweet Wednesday.

Thousands of health workers along the border also have been vaccinated, according to WHO Director-General Tedros Adhanom Ghebreyesus.

A rapid response team is now in the region to help trace any contacts and to help with "safe and dignified burial, surveillance, risk communication and psychosocial support," Uganda's ministry of health says.

Uganda's health experts are also asking people who live along the DRC-Uganda border to take a number of preventive steps, from washing their hands thoroughly to avoiding "social norms like shaking hands and hugging."

The health ministry urged the public to cooperate fully with immigration and health officials, who hope to screen travelers and prevent the deadly disease's spread.

In addition, the government says it wants border communities to suspend large gatherings ranging from market days to large weddings and burials.