Accessibility links
New Documentary 'Blue Note: Beyond The Notes' Surpasses Its Purpose A new documentary, part of the label's 80th anniversary celebrations, transcends the promotional reasons behind its creation... more or less.

New Documentary 'Blue Note: Beyond The Notes' Surpasses Its Purpose

New Documentary 'Blue Note: Beyond The Notes' Surpasses Its Purpose 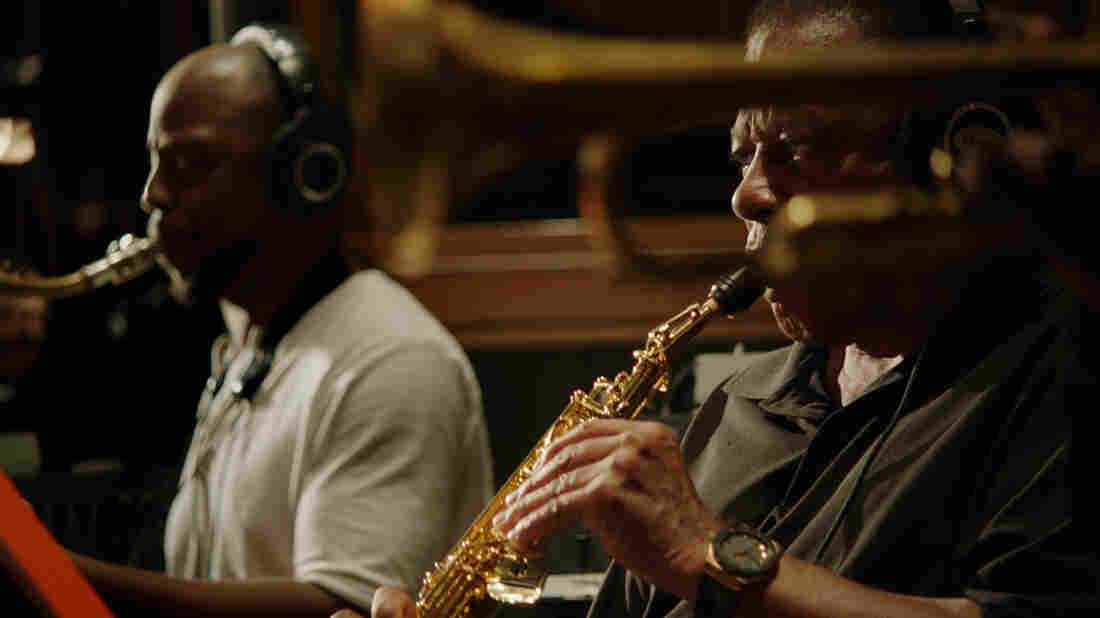 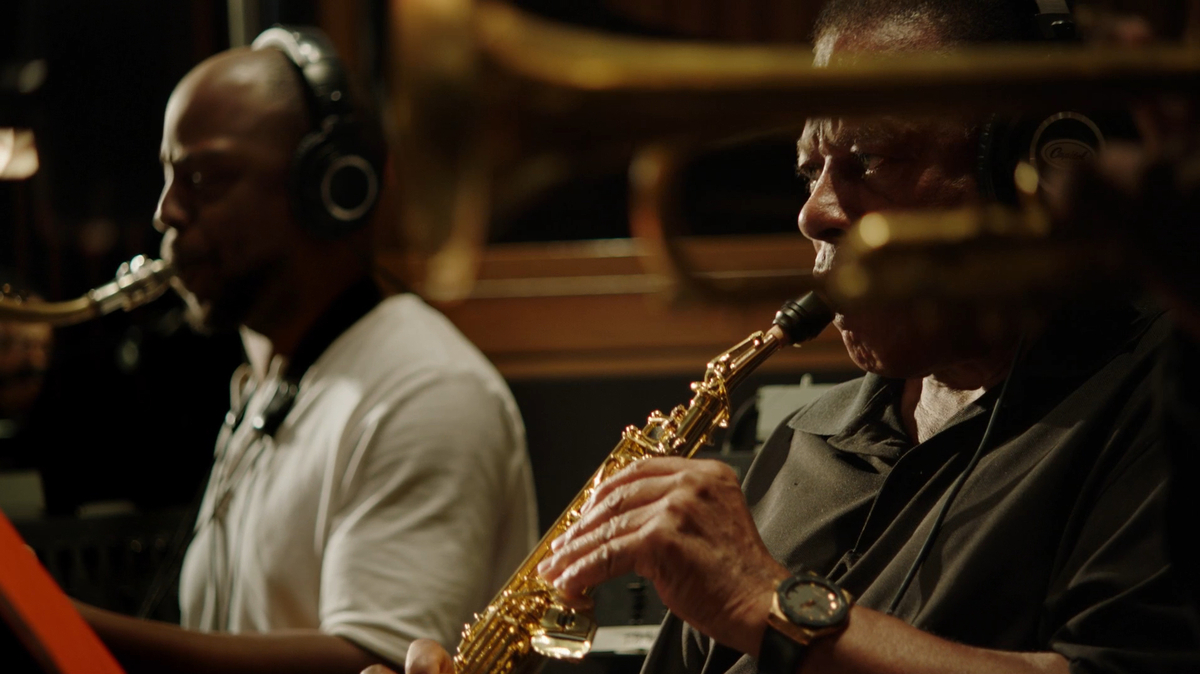 Marcus Strickland, left, and Wayne Shorter, as seen in the documentary Blue Note Records: Beyond the Notes.

Blue Note Records: Beyond the Notes, a stylish and engaging new documentary by Sophie Huber, opens in the recording studio, with a top-tier crew of modern jazz musicians going about their business. From his station behind a keyboard rig, Robert Glasper calls out ideas for an arrangement; Ambrose Akinmusire's trumpet, warming up, can be heard in the background. An establishing shot introduces Don Was, the musical polymath serving as Blue Note's president, as a hipster Buddha in the control booth.

As Was explains to the camera, we're watching a session for the Blue Note All-Stars, a group with an obvious name and celebratory purpose, having originally been assembled in commemoration of the label's 75th anniversary. That was five years ago. Now, the pacesetting jazz label is celebrating its 80th, and among its related promotions and corporate tie-ins — vinyl reissues, branded playlists, album-cover art prints, a limited-edition watch — is this film.

To the credit of Huber — a Swiss-born filmmaker whose previous effort was Harry Dean Stanton: Partly Fiction, a profile of the renowned character actor — any misgivings you may have about the corporate self-promotion of the project are quickly disarmed. With a brief collage of artist voices, a few larger ideas are introduced, if not fully fleshed out: how a reverence for the past can cohabit with a compulsion to push forward; how the legacy of the label contains an inherent call to innovation; how the artistic imperative impels a response to the human condition. "Those artists reflect the times, and what's going on," saxophonist Marcus Strickland attests. "As soon as I put on the record, I'm just transported to a certain time or a certain feeling or a certain understanding of the world."

The endless dialogue between music and culture is Huber's prevailing theme, and it helps lift Blue Note: Beyond the Notes above an exercise in image-burnishing for the label. The film hits its marks as a history — moving neatly through the story of German immigrants Alfred Lion and Francis Wolff, whose shared affinities for jazz led them to establish Blue Note on a shoestring. Their voices are heard in old radio footage; the storied recording engineer Rudy Van Gelder, who died in 2016, appears onscreen in what must have been one of his last interviews. Other signposts — like the label's unexpected foray into hit records in the'60s, and the pressure it put on Lion to sell to a corporate parent — are efficiently covered.

Huber and her editor, Russell Greene, keep the pace brisk and the visual language fluid. Blue Note had a peerless cover-art aesthetic, thanks to designer Reid Miles, and the film expertly plays on that legacy — often lingering on one of Wolff's atmospheric photographs, cropping a selection of the image as Reid Miles did, and revealing how it became the basis of an album cover. Importantly, the film is scored with no less care, as a colorful tapestry of sounds from the Blue Note catalog, heavy on Art Blakey and Lee Morgan, Bud Powell and Thelonious Monk.

The film has a sort of elder's council in saxophonist Wayne Shorter and pianist Herbie Hancock, who made some of the most enduring albums in the Blue Note catalog during the 1960s. Both musicians are featured in the studio with the Blue Note All-Stars; the phrase "beyond the notes" actually appears in an admiring assessment of Hancock, by guitarist Lionel Loueke. (There's a leisurely, intoxicating section devoted to the tracking of "Masqualero," which Hancock and Shorter first recorded in the Miles Davis Quintet; Shorter explains how he had been inspired by the mysterious customs of the Mescalero tribe in New Mexico, "and things that we didn't understand about them and ourselves.")

All of this should be catnip for a jazz fan, though the film strives to connect with a wider audience. But some choices may also give the connoisseur a bit of pause. Miles Davis, for example, comes up not only in the context of his slender early Blue Note output, but also during those quintet years, when he was recording for Columbia. (That distinction is never made.) Some omissions seem like an issue of access and label politics. A recent generation of artists who shaped Blue Note's modern identity — singers Dianne Reeves and Cassandra Wilson, saxophonists Joe Lovano and Greg Osby, pianist Jason Moran — are no longer on the roster, and are merely name-checked in montages.

For that matter, Bruce Lundvall, who revived Blue Note from dormancy in 1984, receives less screen time than he's due. His voice is heard in an archival interview, describing the reboot and sharing credit with producer Michael Cuscuna, who thankfully appears elsewhere through the film. Lundvall, who died in 2015, does get the opportunity to share the story behind two massive commercial successes, hip-hop act US3 and singer-songwriter Norah Jones, who memorializes Lundvall for his warmth, and for his dedication to the artists. (She's the only female artist given a voice in the film.)

Huber's decision to breeze past certain details makes sense when you consider her overall purpose, which snaps into focus during an excellent segment establishing Blue Note's contribution to, and continuing engagement with, hip-hop. Ali Shaheed Muhammad of A Tribe Called Quest explains why the label's catalog became a gold mine for DJs, setting up a sharp succession of hip-hop samples that incorporate the same Idris Muhammad drum break, from Lou Donaldson's "Ode to Billie Joe."

And there's a meaningful digression about To Pimp a Butterfly, the groundbreaking 2015 album by rapper Kendrick Lamar, which featured contributions by Glasper and Akinmusire. Producer and saxophonist Terrace Martin, one of the architects of that album, recalls the circumstances in the studio, and his influence on Lamar's thinking as an honorary jazz musician.

It might seem an unusual culmination for the film — Lamar records for Top Dawg Entertainment, after all, not Blue Note — but it's one that Huber has shrewdly foreshadowed. One of the film's first talking heads, just a few minutes in, belongs to Martin. "A lot of the artists that found their home on Blue Note understood that we all had the survival situation in common," he says, "and that came out through their music."

Blue Note Records: Beyond the Notes opens on June 14 in New York at the Metrograph, and on June 28 in Santa Monica at the Monica Film Center. For more screenings, visit the film's website.