Accessibility links
Fact Check: Trump Compares Foreign Election Interference To Oppo Research President Trump says he might be open to taking information from a foreign government in a future election, calling it a part of politics. But the law draws a distinction when foreigners are involved. 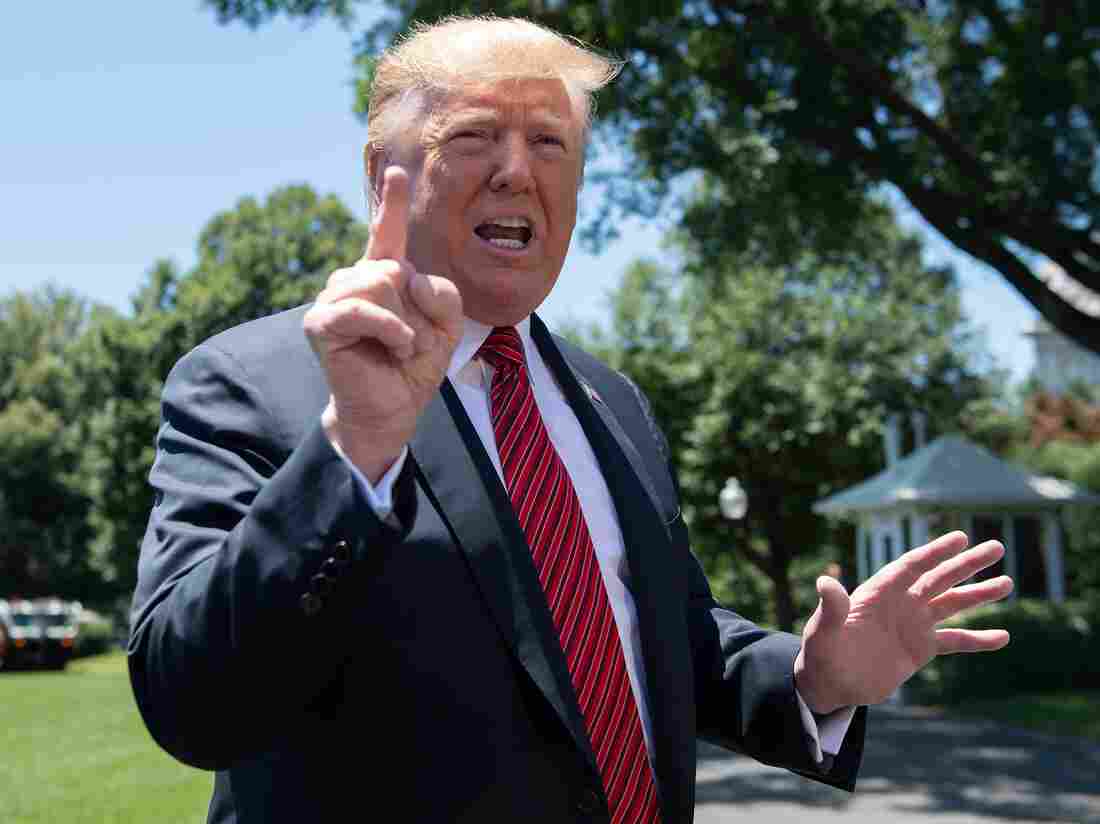 President Trump speaks with reporters at the White House on Tuesday. He told ABC News that he would be open to hearing information about rival presidential candidates from a foreign government. Jim Watson/AFP/Getty Images hide caption 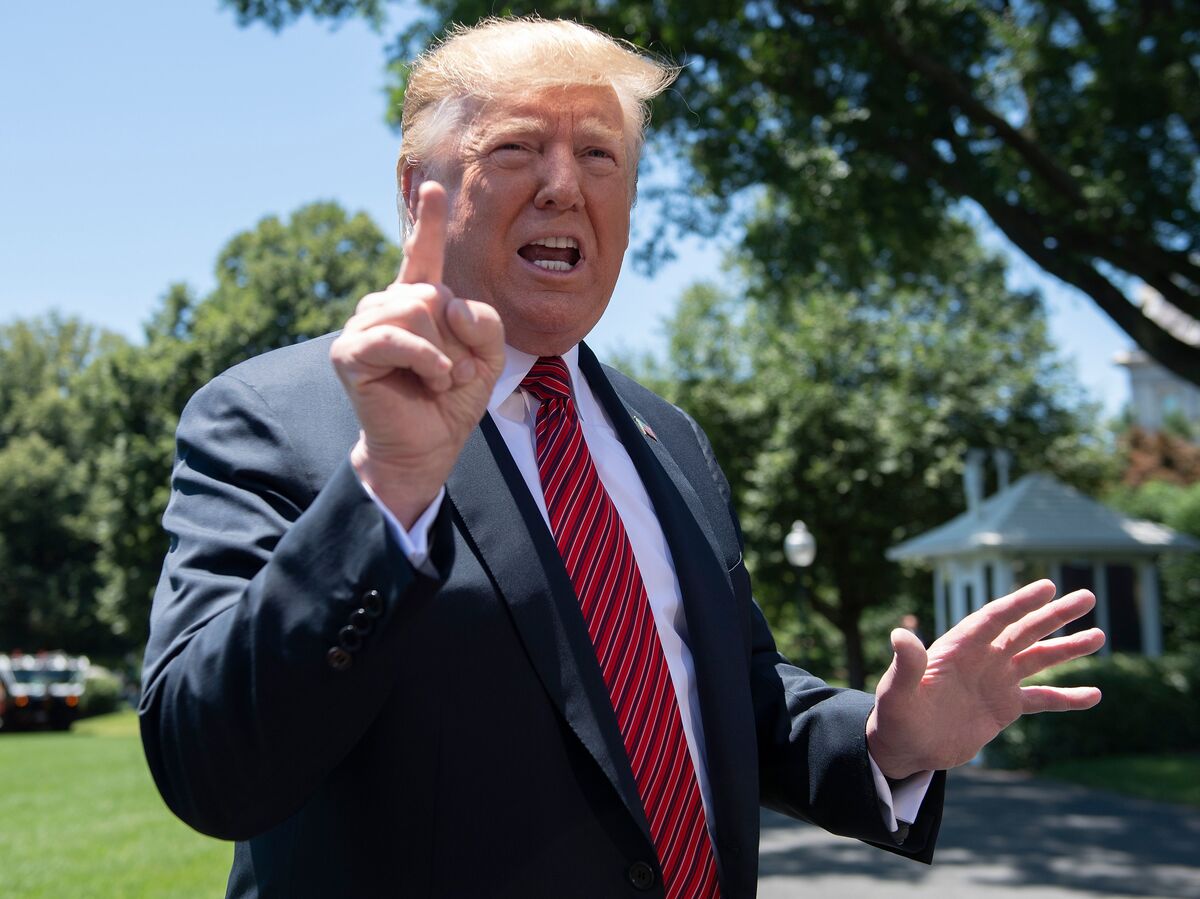 President Trump speaks with reporters at the White House on Tuesday. He told ABC News that he would be open to hearing information about rival presidential candidates from a foreign government.

President Trump has conflated an infamous practice in and among political campaigns — "opposition research" — with foreign election interference like that launched by Russia against the United States in 2016.

Are they the same thing? Is foreign interference just a kind of "oppo research," as Trump said in an interview with ABC?

The short answer: No. Oppo research is part of politics. But the law prohibits American political campaigns from taking "a contribution or donation of money or any other thing of value" from foreigners. The ban isn't limited to money, as Justice Department investigators wrote.

The long answer: Trump told ABC News that essentially every political candidate is willing to accept information that could be of use against an opponent.

"You go and talk honestly to congressmen, they all do it. They always have. And that's the way it is. It's called 'oppo research,' " he said.

Opposition research is what campaigns and political operatives use against each other. If one candidate running for office dug up a story about something embarrassing her opponent had done, the first candidate might bundle it together and see that it found its way into the newspaper.

In 2016, however, the Russian government also launched a broad wave of "active measures" from outside the U.S. and used sophisticated tools found only in the arsenal of a major government. Its ultimate goal was to help elect Trump.

Trump's campaign counted on the boost it got from WikiLeaks in 2016, according to the report by Justice Department special counsel Robert Mueller. Donald Trump Jr. also accepted the offer of a meeting, via intermediaries, to get "dirt" on Hillary Clinton.

The source for WikiLeaks' revelations, which embarrassed Democratic and other targets inside the United States, was Russia's military intelligence agency, the GRU. The agency had stolen the material in cyberattacks that compromised the Democratic National Committee and others.

The person behind the offer accepted by Trump Jr. was described as Russia's chief federal prosecutor, who dispatched a Russian attorney to New York City to make the pitch to the Americans as part of Moscow's support for the Trump campaign.

The Russian lawyer who met with Trump Jr., Natalia Veselnitskaya, gave him and his colleagues what she said was a tip about improper movements of money by Democratic fundraisers.

Trump Jr. and other top aides on the campaign said they were disappointed because they expected something juicier and didn't do anything more.

What the Justice Department said

The fact of the meeting and of that tip isn't disputed. But what Mueller's office concluded was that to be charged, the Americans involved had to know at the time they were taking the information that doing so was forbidden.

A "scienter requirement," in lawyers' parlance, requires that the government prove, if it makes a case, that a defendant acted "knowingly and willfully" in taking information from a foreigner with the knowledge that doing so was a crime.

Prosecutors wrote that the government "had not obtained admissible evidence that is likely to establish the scienter requirement."

The result: no charges.

It still isn't clear what other, non-"admissible" evidence the Justice Department might have developed; Democrats in Congress are battling with the department now over access to the underlying material from Mueller's office.

New awareness of law — kind of

One outcome of Mueller's report, however, which has become a bestselling book and which has dominated Washington headlines since its release, is that it may be much tougher for political professionals to claim in the future that they don't know it's unlawful to accept anything of value from foreigners.

At one point, Trump appeared to scoff in his ABC News interview at the prospect that there was any distinction between "oppo research" and accepting material from foreign operatives, although he said also he wouldn't rule out notifying authorities if he thought something seemed off.

But in another exchange, the president dismissed the idea that any political campaign would contact the FBI about contacts with a foreign government. And he faulted FBI Director Christopher Wray, who has told Congress that's what campaigns should do.

"My view is that if any public official or if any member of a campaign is contacted by any nation-state or anybody acting on behalf of a nation-state about influencing or interfering with our election, then that's something that the FBI would want to know about," Wray told Congress on May 7.

"The FBI director is wrong, because frankly it doesn't happen like that in life," Trump said. "Now maybe it will start happening. Maybe today you'd think differently."

Trump's remarks are awkward for Wray and others inside the administration who have said they are stepping up efforts to safeguard elections following the 2016 experience.

The intelligence community has begun giving briefings to current political campaigns, for example, and the National Security Agency and U.S. Cyber Command have reportedly taken a tougher stance behind the scenes with Russia's online agitation mill, the "Internet Research Agency."

Democrats slammed the president over his remarks — House Speaker Nancy Pelosi called the comments "an insult to our democracy," and Senate intelligence committee Vice Chairman Mark Warner, D-Va., said they were "outrageous."

Warner also said he thought Trump's statement underscores the need for new legislation that reflects the lessons from Mueller's inquiry.

One would mandate a paper record for every ballot cast in the United States, because a number of states include jurisdictions with electronic-only voting systems. Warner also wants new restrictions on U.S. social media platforms and a mandate that campaigns must report contacts with foreigners.

The special counsel's office documented around 140 contacts between Trump's campaign, Russians and WikiLeaks. That included meetings in which then-campaign chairman Paul Manafort gave internal polling data to a man who has been linked with Russian intelligence.

Ultimately, the special counsel's office said it did not establish any broader conspiracy between Trump's campaign and Russia's interference.

Pelosi said on Thursday the House would pursue election security legislation this year, but it isn't clear what Democrats might agree upon.

And it also isn't clear whether, notwithstanding Warner's proposal, Senate Majority Leader Mitch McConnell, R-Ky., might agree to take up any election security bill this year.