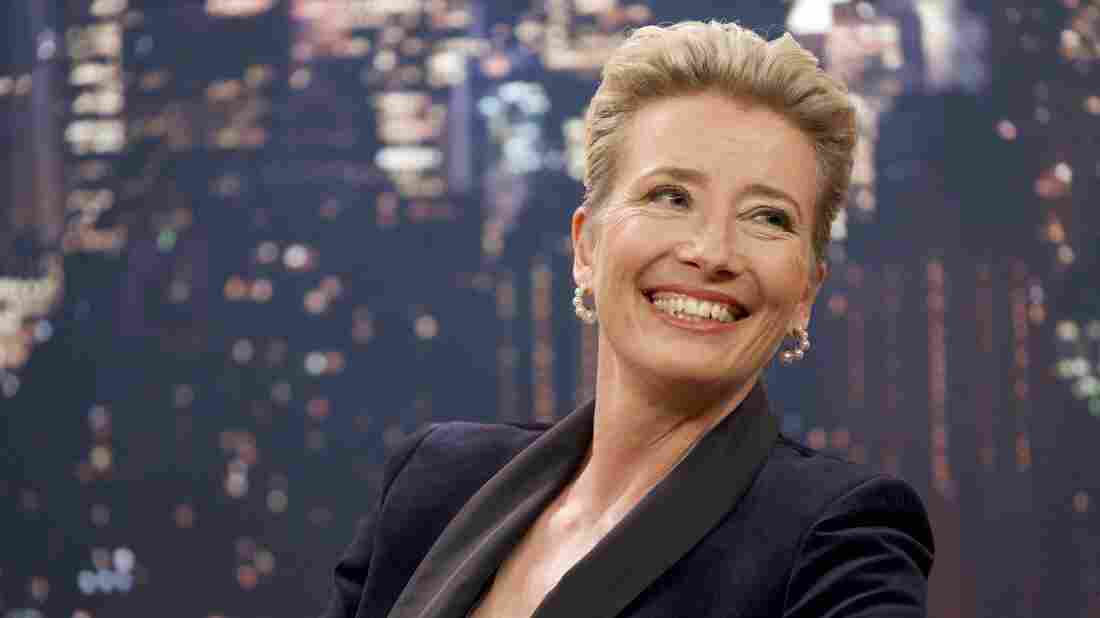 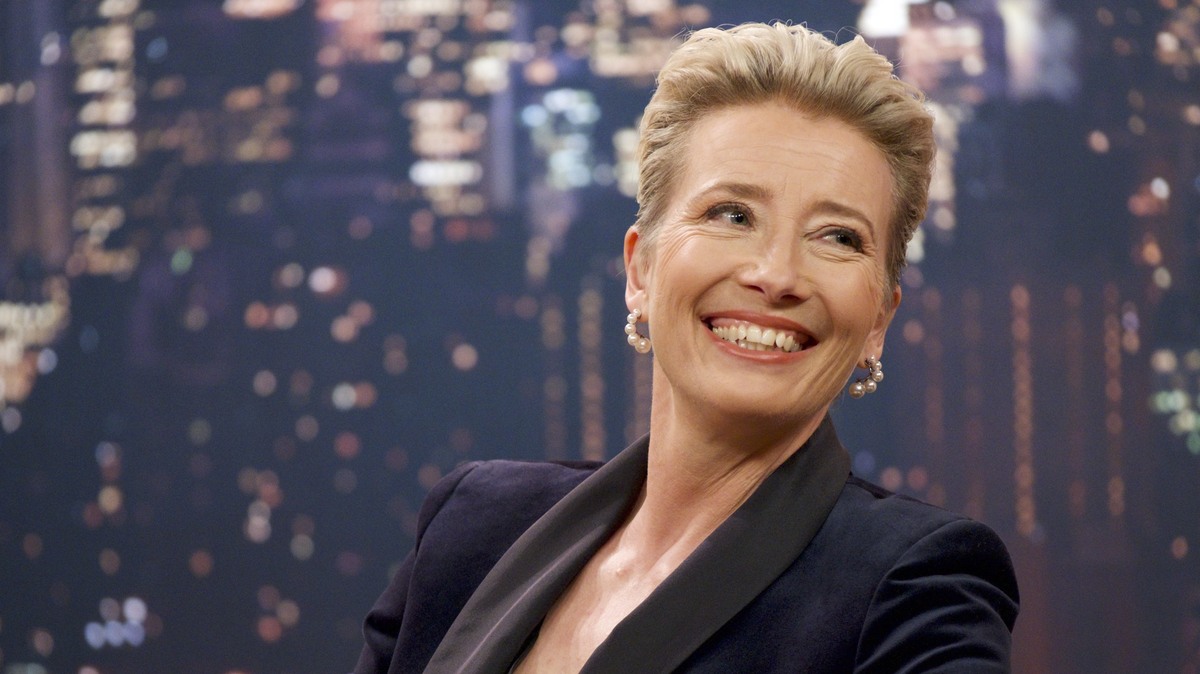 Emma Thompson plays Katherine, who is usually not this happy in Late Night.

When Mindy Kaling, then a writer on The Office, first started appearing on camera as Kelly Kapoor, Kelly was a quiet, unassuming, frumpily dressed office drone like everybody else — another person for Michael Scott (Steve Carell) to mistreat. It was later that they realized what she should be: She should be awful. Kelly should be vain and insufferable and demanding, needy and greedy and self-obsessed. It made Kaling a star.

Then when she got her own show, The Mindy Project, the version of Dr. Mindy Lahiri in the pilot was too bad. She was too dumb and too shallow, and it was suggested that she was an inattentive doctor to her patients. They adjusted Mindy Lahiri, too — they made her a little better, and smarter, and at least a good doctor, even as she retained her off-putting preoccupations with how she was perceived.

It's a balance, you see. It's so hard to get it right when you're a woman in comedy, whether you're just one part of a great big team or whether you've become top dog. That's one of the things Late Night is about.

Late Night was written by Kaling, and in it she plays an aspiring late-night writer named Molly opposite the great Emma Thompson as Katherine Newbury. Katherine is the host of a late-night network talk show — the only woman to ever have that job. A legend. (In reality, of course, there isn't one late-night network host who's a woman; there are none.) Newbury wants her brand to be excellence, and she wants to be able to book writers like Doris Kearns Goodwin — people she thinks are serious, because while she does comedy, she increasingly yearns to rise above the things she hates about television. Those things include Jimmy Fallon and James Corden and their game-playing, clip-friendly approach to late-night TV, despite the fact that theirs is the model that seems to be winning.

Despite her long career, Katherine sees threats looming. On top of the fact that she's aging (and knows that to be a threat on its own), she's being called out for her exclusively white and male writers' room, led by Tom (Reid Scott), the bro-y monologue writer, and Burditt (Max Casella), the veteran who knows Katherine better than anyone and just wants to keep everything running smoothly. So she assigns her right hand Brad (Denis O'Hare) to find her a female writer. Anybody will do. Molly, who works at a chemical plant, wins a contest and hustles it into an interview with Brad, because she's always wanted to work in comedy, and because she idolizes Katherine. Impressed with her interview as well as her energy — and pressured by Katherine to get the hire done — he hires Molly for 13 weeks, promising that she'll probably be dumped at the end of that time.

What follows is an uneven examination of women and business and comedy that tries to get its arms around both the challenges of being a nominally powerful woman and the challenges of being a woman just starting out in a new field. And as Katherine and Molly navigate around each other — and, in fact, as Katherine deals with the network president (Amy Ryan) — there is an undertone surrounding a lot of their interactions in which they all, really, seem to have hoped for more and better support from each other. But they are all under siege, in their own ways, and there's often no time to be generous when you're trying to stay afloat.

The biggest problem the film has is that its late-night monologue jokes aren't very good. They're not just weak when they're supposed to be weak; they're weak when they're supposed to be getting better. The film relies on audience reaction shots — some pretty over-the-top in their enthusiasm — to tell you when the material is meant to be good for plot reasons. You need those cues because the material itself is forgettable.

But then ... aren't most monologue jokes pretty forgettable? Isn't that a big part of the reason Seth Meyers' signature is "A Closer Look" and Jimmy Fallon's is games and James Corden's is "Carpool Karaoke"? Are monologue jokes ever all that funny? Indeed, the best thing Molly does for the show, judging by how good the material she brings in actually looks, is to push Katherine to get over her dislike of leaving the studio and going out on the street — to get past the setup-punchline structure of the monologue joke. The "White Savior" bit that's excerpted in the trailer is funny! As is the bit where she helps people complain to brands on Twitter! Nevertheless, they'd also like to persuade you that there's a way for this staff to write hilarious monologue jokes that sound at home on late-night television. That needle isn't threaded in the film; perhaps it can't be.

What works much better: If you accept the film's understanding of Katherine as a titan who's grown frustrated and sour, and its understanding of Molly as a flawed but eager upstart with at least some promise, their interactions (and their interactions with the writers' room) can be thrilling to watch in their specificity. Kaling herself has to be intimately familiar with moments similar to the one in which a male writer muses that it must be nice to be a woman of color, because you can get any job you want — a thought he has because one woman has infiltrated the ranks, so now he assumes that any woman can have any job. (A note: Molly is in fact someone who doesn't have comedy writing experience outside of some amateur stand-up, but don't kid yourself: For all the Harvard Lampoon guys and similar career-path folks who have gotten into writers' rooms, there are plenty who took other paths. A Survivor contestant was once plucked to become a sitcom writer. Molly is not the first to stumble into an entertainment job because somebody took a liking to her and thought she had an interesting voice.)

But perhaps what rings the most uncomfortably true is the sense of entitlement on display in the writers' room, which isn't angry as much as it is indignant. All of these guys are cool with admitting that they phone it in because they claim Katherine does — and yet they still insist nobody else is good enough to do what they do. They simultaneously fancy themselves above their work and as the ones who protect it from the unworthy. There's a fantastic (and funny) performance by John Early as a very likable, professionally apathetic writer who prides himself on floating above all this dull stuff while punching a clock with his good buddies, and yet, it's a huge part of his identity that this is his job. Writing for this show constitutes a kind of success these guys are jealously guarding, even as they talk about how little real effort they put into it. There's something real here, something distasteful about privilege and gatekeeping, about the luxury of being a cynic, that I've never quite seen put forward in this way.

Again, the film is regrettably uneven: There's a third-act development meant to add weight to Katherine's dilemma over wanting to keep her show, and I dearly wish they'd cut it. It's enough that Katherine is clawing to stay relevant, and that she feels dismissed, and that she's become so angry at her industry that she's no longer giving her audience her best or talking to her writers. An extraneous personal-professional angle only serves to muddy the waters about the very things the film is trying to be about. This story beat may not be a studio note (something like "make Katherine more vulnerable!"), but it feels like one, and when something sneaks into a film that feels unearned enough to be a studio note, it probably doesn't belong there.

There are also moments that are, even making allowances for this kind of big-hearted studio comedy, just ... a little bit too corny. The direction by Nisha Ganatra feels a little rote, and for a world as glossy as television, there's surprisingly little visual interest.

But when Molly faces down one of the men who is constantly insulting her and tells him that she knows it drives him crazy that they have the same job, you are seeing an insight that you know must be hard-won for Mindy Kaling and many, many other women in many kinds of jobs. It is a scene that is in part about the weaponizing of ostracization, so often associated with adolescent girls and so often practiced in professional settings by a lot of different kinds of people — including grown men. Molly looks at a young man coming in for an interview at the same time she does, and she sees that he already knows everyone in the writers' room. How can this be? How can something allegedly talent-based be a closed system? Well ... because it is. And that's part of why the men in it keep begetting more men like them.

Late Night isn't quite a clean success, largely because it doesn't persuade the viewer of the rightness of its opinions about what's funny in a monologue. But the scenes outside of that — ones like Molly being denied a place to sit, or Katherine galumphing up to Molly's walk-up apartment for a talk — those are funny.

There's something really rich about the fact that the film's biggest problem is trying to convince you that anyone can write a really funny traditional, topical, late-night monologue that late-night audiences would want to listen to. That's not how the real Mindy Kaling is funny. (Is that really how anybody funny is funny?) Despite those problems, there's a lot here, about alliances and debts owed, and about the regrettably transactional relationships between white bosses and anyone they hire and push forward as a defense against charges of bias. I'm not sure the film gets all of this right, but it's an intriguing, enjoyable, well-cast effort.