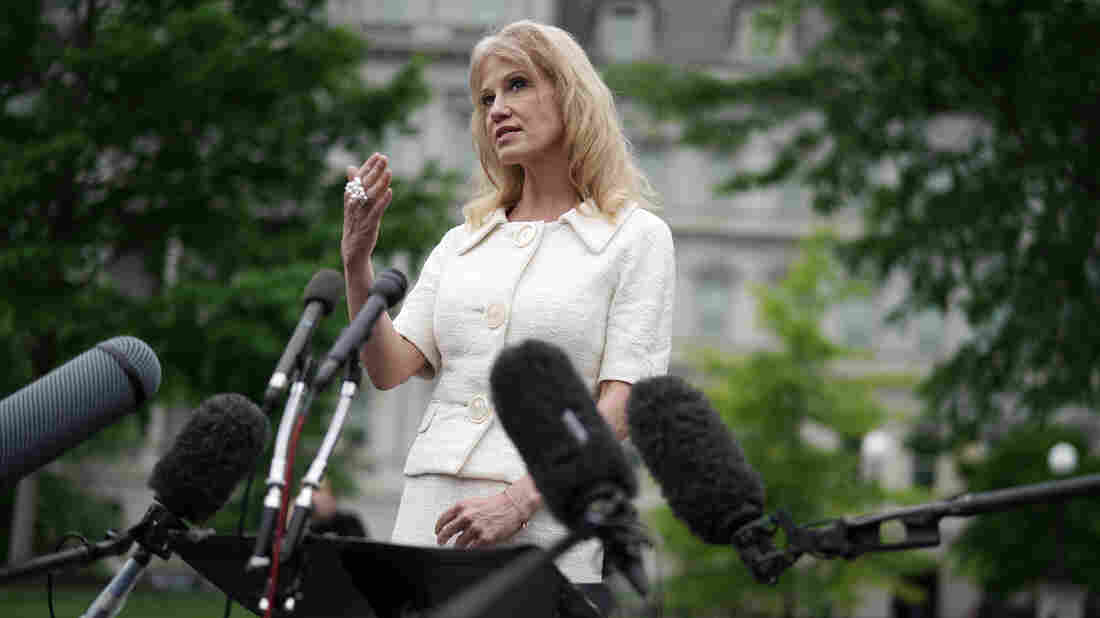 Kellyanne Conway, counselor to President Trump, talks to reporters outside the White House on May 1. The Office of Special Counsel says Conway should "be removed from federal service" for repeated violations of the Hatch Act. Chip Somodevilla/Getty Images hide caption Kellyanne Conway, counselor to President Trump, talks to reporters outside the White House on May 1. The Office of Special Counsel says Conway should "be removed from federal service" for repeated violations of the Hatch Act.

Presidential adviser Kellyanne Conway has repeatedly criticized Democratic candidates in her official capacity in violation of the Hatch Act and should lose her job, according to the U.S. Office of Special Counsel.

"As a highly visible member of the Administration, Ms. Conway's violations, if left unpunished, send a message to all federal employees that they need not abide by the Hatch Act's restrictions. Her actions thus erode the principal foundation of our democratic system — the rule of law," the office wrote to President Trump.

OSC is an independent federal ethics agency that has no relationship with former Department of Justice special counsel Robert Mueller's investigation into Russian interference with the 2016 election.

The Hatch Act forbids executive branch employees from taking part in political activities while engaged in their official duties.

In March 2018, the ethics agency found Conway broke the law twice in interviews about the Alabama Senate race. The new report focuses on her commentary on Democratic presidential candidates. It cites examples of her rhetoric, including suggesting Sen. Cory Booker of New Jersey was "sexist" and alleging that former Vice President Joe Biden was unwilling to be "held to account for his record."

Conway has downplayed the significance of the law, the report says, telling an interviewer on May 29, "If you're trying to silence me through the Hatch Act, it's not going to work," and "Let me know when the jail sentence starts." (In fact, the law has no criminal penalties.)

The OSC recommends Kelly "be removed from federal service." It would be up to her supervisor, Trump, to fire her — which appears unlikely.

Special counsel Henry Kerner, a Trump appointee, told NPR that Conway's persistence led to his harsh recommendation. "We've had some prior violations" of the Hatch Act, he said, citing one during the Obama administration. "But I'm unaware of any multiple offenders on that level."

'Not In Compliance': Wilbur Ross, The Trump Official Who Keeps Watchdogs Up At Night

Conway declined to respond to the special counsel's report, as she did in 2018, the office said.

"Its decisions seem to be influenced by media pressure and liberal organizations — and perhaps OSC should be mindful of its own mandate to act in a fair, impartial, nonpolitical manner, and not misinterpret or weaponize the Hatch Act," Groves said.

The White House pushback also included the release of an 11-page letter to Kerner from White House counsel Pat Cipollone, sent before the report was released. The letter alleges that OSC rushed its decision before Conway had time to respond and that it stretched the law to infringe on her First Amendment rights. Cippolone called on Kerner to withdraw the report and reopen the case.

House oversight committee Chairman Elijah Cummings, D-Md., announced his panel will conduct a hearing June 26 with the Office of Special Counsel "to hear about its findings and recommendation, and we will be inviting Ms. Conway to answer for her violations."

Cummings noted "multiple concerns about Ms. Conway for the past two years," citing what he called her "abusive trips on private jets," and her role in "the White House's failure to issue a legally-required national drug control strategy for two years."

Cummings is also interested in whether Conway has divested her assets or is still involved in The Polling Company, which Conway founded.

Debra Katz, a Washington lawyer specializing in employment law and discrimination cases, said the White House is seeking to undermine the Hatch Act, but "it's not a law with great nuance."

She told NPR, "This is not a hard act to adhere to."

The watchdog group Citizens for Responsibility and Ethics in Washington, CREW, which filed complaints with the OSC about Conway's conduct, said, "Conway's repeated violations and publicly expressed disdain for the law show a dangerous disregard for governmental ethics, the rule of law and the long-held understanding that government officials should not use their official positions to advance partisan politics. We join OSC in calling for Kellyanne Conway to be removed from federal service and expect today's findings to send a strong message to officials across the Trump Administration and the federal government that these violations will not be taken lightly."

The nonprofit Project on Government Oversight said in a statement, "It's untenable for a senior counselor to the President to decide that civil law is no longer something she is bound by. No one is above the law."