Accessibility links
'Norco '80' Is A Gripping Account Of One Of America's Most Notorious Bank Heists Peter Houlahan's account of the violent robbery and its aftermath is based on interviews with civilians, officers and robbers involved; his prose reads like a crime novel in the best way possible. 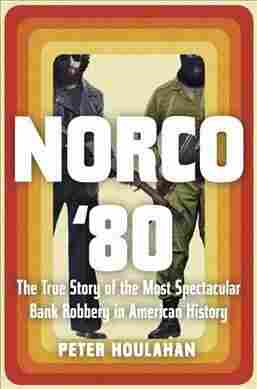 For several decades in the 20th century, the Los Angeles metropolitan area was known as the bank robbery capital of the world.

The area's abundance of freeways made it easy for robbers to quickly put distance between themselves and the banks they targeted, escaping into other jurisdictions before the police even knew what was happening.

Law enforcement officers in the region had abundant experience in responding to these crimes, but nothing prepared them for what happened in Norco, a small town in Riverside County, on May 9, 1980. A group of five robbers hit a branch of the Security Pacific Bank but failed to flee the scene before police showed up. The resulting shootout, escape and manhunt form the basis of Peter Houlahan's gripping debut book, Norco '80, a nonfiction account of one of the most violent bank robberies in U.S. history.

The Norco robbery was an odd one from its very beginning. The perpetrators, led by two park maintenance workers and small-time pot dealers named George Smith and Christopher Harven, had uncommon motivations for the crime. As Houlahan writes, "They were not drug addicts desperate for their next fix, [or] a ring of thieves looking to pull a string of heists. ... The two men behind the Norco bank robbery believed that America was on the verge of a catastrophe of biblical proportions, one in which only the well armed and well prepared would survive."

The two men convinced Harven's brother, Russell, to join the heist, along with two brothers named Billy and Manny Delgado. The plan that Smith hatched was half-baked, to say the least, "replete with grandiosity, self-righteousness, and confidence that he knew more than everyone around him." It was doomed from the start: Smith elected to rob the bank where he was a customer, one which also happened to be several miles away from the nearest freeway.

The robbers had hoped that by planting a diversion bomb, set to go off on the other side of Norco just before the heist, the police would be slow to respond. But the bomb was extinguished by a civilian who happened to be driving by, and the gang of five had the misfortune of robbing the bank right when a police officer happened to be nearby. When they left the bank, a shootout ensued, wounding an officer and killing Billy Delgado, who had been designated the getaway driver.

The remaining robbers managed to escape, leading law enforcement on a miles-long chase that ended in the mountains, where they fled on foot. When the long ordeal was over, one officer and another robber were dead, with almost 20 others wounded. The 40-mile-long crime scene was the largest in the history of U.S. law enforcement.

Houlahan, who based his account of the robbery and its aftermath on interviews with the civilians, officers and robbers involved, proves to be a master at pacing — he writes with a narrative urgency that perfectly captures the quick and chaotic nature of the robbery. His prose incorporates the vernacular of the officers and criminals; it's hard-boiled, shot through with profanity, but never forced. It reads like a crime novel in the best way possible.

But what's truly remarkable about the book is the depth Houlahan brings to the story. Norco '80 isn't just a play-by-play account of the crime, as shocking as it was — he takes several deep dives into subjects related to the robbery, including Smith's involvement with the "Jesus movement" of the '70s and the wild trial ("one of the longest and most expensive ... in American history") that followed the capture of the surviving robbers.

Perhaps most interesting, however, is his look at the post-traumatic stress that the surviving officers were forced to endure. Some of the responders went to work the day after the shootout, reasoning, "If you didn't take any lead, you didn't take any time." The psychological damage, Houlahan writes, "was immediate, tearing friendships apart, ending marriages, destroying careers, and ruining lives. But it just keeps rippling out through the generations, carried forward by heartbroken parents, wives, brothers, and sisters, and handed down to the half dozen children left fatherless on both sides." (Houlahan, an EMT who was among the initial first responders to the Sandy Hook massacre in 2012, has written about PTSD among emergency workers before.)

With his first book, Houlahan proves himself to be an astonishingly gifted writer, breathing urgent life into a true story that still resonates today. Norco '80 is a fascinating true-crime account that seems likely to be one of the best nonfiction books of the year.