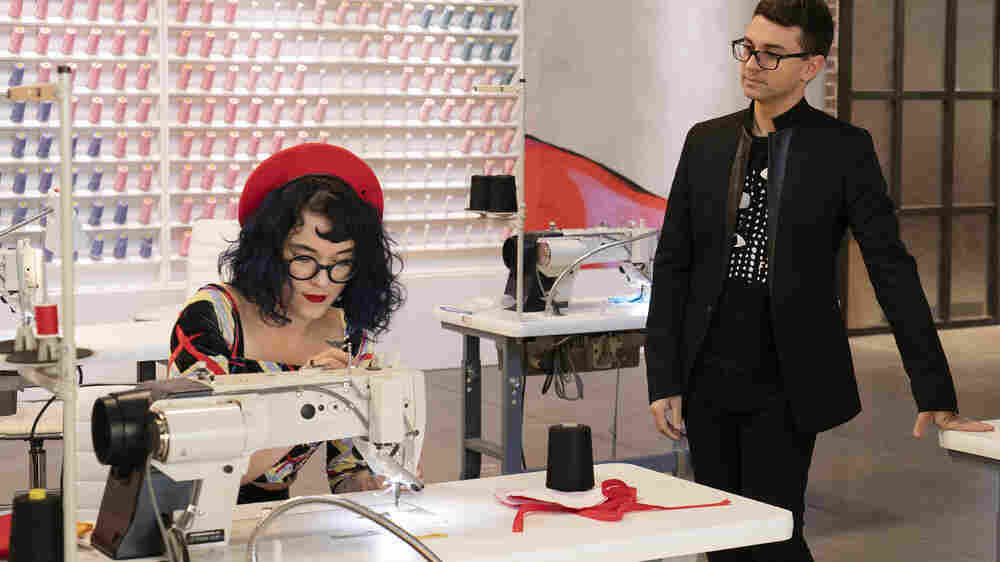 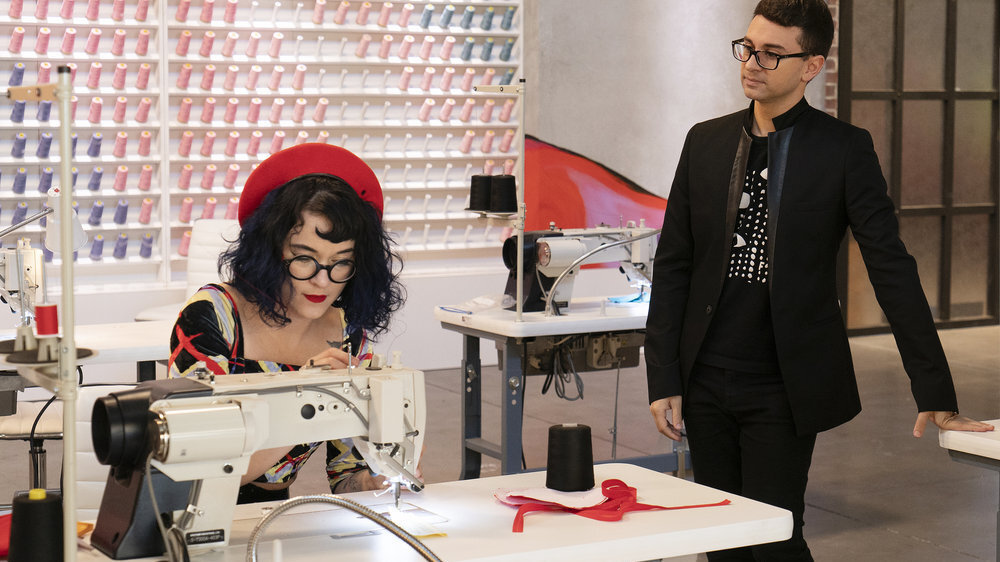 Christian Siriano watches over the work of Hester Sunshine on Project Runway.

It was the show's first run without Heidi Klum and Tim Gunn, who reigned while Runway ran on Bravo and then on Lifetime. Back on Bravo now, it features model Karlie Kloss in the host role and designer (and former Project Runway winner) Christian Siriano in the mentor role.

Not only did the season wind up being a strong argument that a show like this can continue with a new host, but it also almost became an argument for changing hosts as the first, not the last, option for shows that have grown stale. I surprised myself with my affection for it and certainly with my affection for Siriano, not my favorite back when he was a contestant.

Kloss is still getting her feet under her, but she has been just fine at this job — at least as good as Klum was when she was new to it. She has a warm presence, friendly and supportive, and she seems very happy to be there.

But the big surprise, at least to me, has been Christian Siriano. While entirely different from the rightly beloved Tim Gunn, he has proved to be a funny and smart and honest mentor, one who brings the right amount of reality-show zazz while also making all kinds of sense. Success doesn't flatter everyone, but it's flattered him.

When Siriano won the fourth season of the show back in 2008, he was the show's youngest winner at only 22 — and it showed. He could be impatient, full of himself and negative about work he didn't feel like doing for clients he didn't feel like serving. He was criticized for careless comments about drag queens and transgender people when he was first famous.

After his victory, though, he vowed to get better, and then he worked and worked and worked. He kept making high-end fashion, but he also made shoes with Payless and a line for Lane Bryant, which kept his name in front of a general audience, not unlike the one he had on television.

His clothes appeared on red carpets more and more, and he got a new wave of attention in 2016 when he made a gown for Ghostbusters star Leslie Jones, who had complained that designers didn't want to dress her. He went on to dress eight women for the Emmys that fall, across a variety of ages, races, body types and styles.

After that, it seemed like he was inescapable at any high-end celebrity event, and he made some of the most admired looks appearing anywhere — including Billy Porter's stunning velvet tuxedo gown for the Oscars, which may well be the red-carpet look of the year.

Even if he weren't a Runway alum, Siriano would have been a great candidate for this position based simply on the position he occupies in fashion right now. They would have been lucky to get him.

At the same time that they brought on this really strong fashion mentor who is as current as current gets, the producers cast contestants who were, for the most part, pleasant. There was very little interpersonal drama and a lot of focus on the development of the clothes (fashion writers Tom + Lorenzo have written well on this all season), and by the time we got to the end, the finalists — Sebastian Grey, Garo Sparo and Hester Sunshine — all seemed perfectly qualified and on friendly terms.

It really did come down to whose collection worked out best. It could have been any of them.

In the finale, Garo had a little too much trouble with execution, so he was set aside, and it came down to Sebastian and Hester, both of whom made very good final collections in their own styles.

Sebastian makes more classic, elegant clothes, always impeccably made but not dull. The leather work in his final collection was distinctive and grand.

Hester, on the other hand, finally seemed to get a handle on her "clown picnic" aesthetic, very playful and colorful, and put together a collection that didn't seem as gimmicky as some of her work during the season. She's also a brilliant stylist, using accessories maybe as well as anybody on the show ever has. She peaked at the right time, and she managed not to include some of the things she has gravitated toward that haven't worked (she got mostly over her love of sheer dresses with ugly pasties/bust cups, for instance).

When Kloss and judges Nina Garcia and Brandon Maxwell talked about Sebastian and Hester, joined by guest judge Diane von Furstenberg, their debate made a lot of sense. Sebastian's line was more perfected. It was more cohesive. It was more of a complete idea.

But Hester, they acknowledged, is very good at another element of selling clothes: being a personality who represents the brand well. This didn't come off as crass, as if she might win solely because she's more camera-friendly. It came off as realistic, in that she might win because she made a terrific collection and there's a unity of her persona and her clothes that help make a designer a star. Marketing is real; being good at it is real.

They chose Sebastian as the winner, but the show hadn't positioned any "I'm going to riot if this person wins" options, as there sometimes have been in the past.

All of this — all of it — was part of a sense across the season that Project Runway had both become a better show than in recent years, one wildly more relevant to actual current fashion. Not only did it feature the newsmaking Siriano, but also judge Brandon Maxwell is the one who designed Lady Gaga's multiphase Met Gala outfit, probably the most talked-about look of the year from the most fussed-over celebrity fashion event of the year. Somehow, 16 seasons down, Project Runway leveled up.

Don't get me wrong: Tim Gunn was a very good mentor. He was gentle, wise, encouraging. He approached mentoring like a teacher, which is what he was. But if anything can invigorate a show like this after 16 seasons, it's someone who does the job really differently, but also does it well.

Siriano has a different vibe in the workroom, maybe a little more like a boss overseeing apprentices. He's bracingly honest in a way that can puncture notions that are better in theory than in practice; I laughed when a designer explained his plan to contour an outfit with zippers and Siriano said, "You're going to put a zipper right on the boob?"

And the ego of his younger self has, perhaps with the help of his success, become less defensive and more confident, so that he enjoys gently teasing designers about situations where he tells them what they need to do and he turns out to be right — but he never seems mean about it, ever. He warns them off their bad ideas with a good-humored despair, often falling back on something like "you're killing me" when he's worried about their choices.

It was such a delightful surprise to discover that changes I was initially worried about might be just what I needed to start loving the show again. It's good enough when a successful host change lets you continue to enjoy a show (as happened to me with The Great British Baking Show), but when it reinvigorates a show in which you've lost interest, that's something special.

Tim and Heidi are working on a new project for Amazon — and I'll watch that, too. Still love 'em both! Still in their corner! But what a pleasure it has been to return to an old favorite that's given itself a lift.