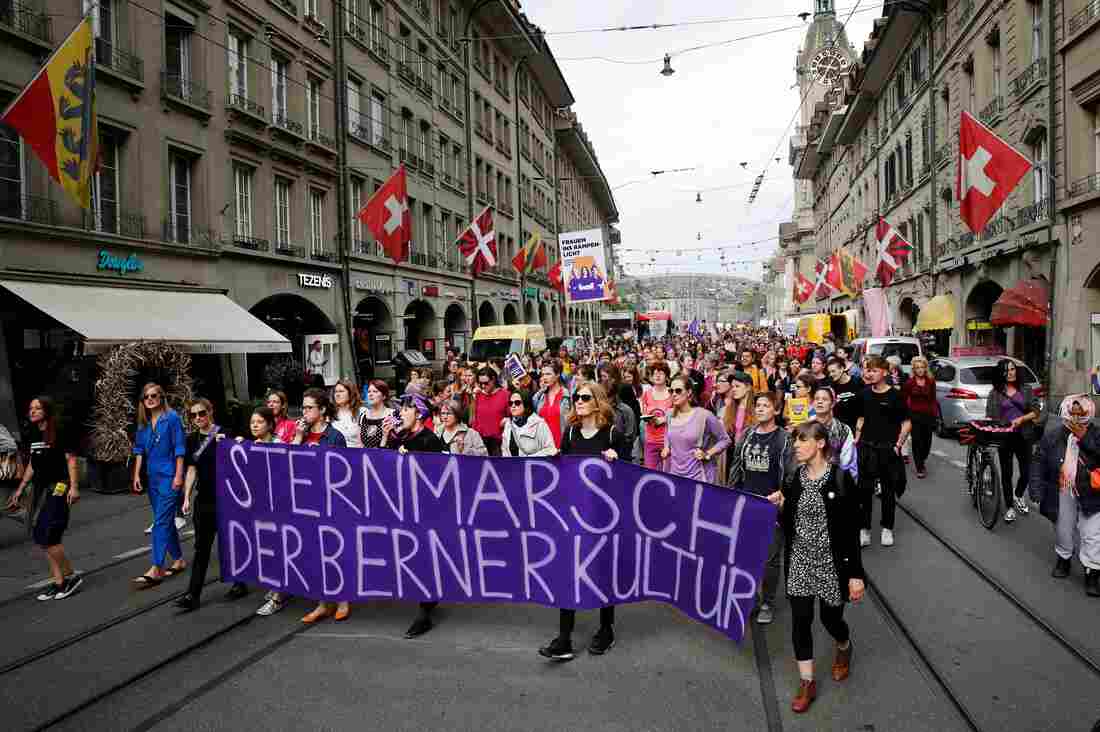 People took to the streets Friday in the Swiss capital, Bern, during a nationwide strike for wage parity for women. Stefan Wermuth /AFP/Getty Images hide caption 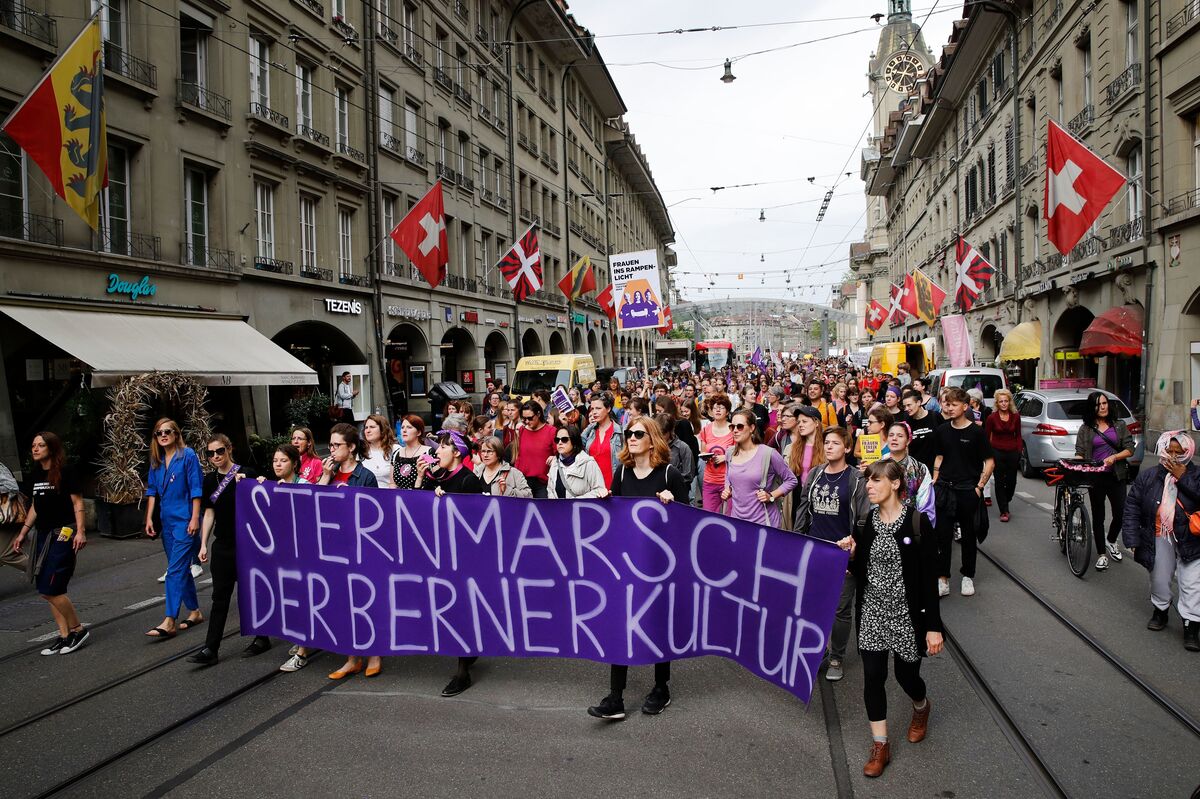 People took to the streets Friday in the Swiss capital, Bern, during a nationwide strike for wage parity for women.

Thousands of women are demonstrating in the streets of Switzerland. Dressed in purple and brandishing signs, they're furious that in one of the wealthiest countries in the world, their wages still lag far behind those of men.

In the capital city, Bern, female parliamentarians walked out of a Federal Council session to join the protests outside, Lisa Schlein reports for NPR. In the city of Basel, an image of a female symbol with a giant raised fist was projected onto a skyscraper.

"The women say they want equal pay for equal work, and an end to discrimination and sexual harassment in the workplace," Schlein reports.

According to many estimates, women in Switzerland make about 20 percent less than men. A 2018 study from the World Economic Forum ranks Switzerland as 44th in the world in wage equality for similar work. (The U.S. ranks eighth, according to the study.)

Sold Into Sex Slavery: The Plight Of African Women Migrating To Europe

Switzerland has come under criticism in the past for lagging behind in gender equality. Swiss women did not get the right to vote until 1971. And one federal state, known as a canton, dug in its heels for two more decades. As NPR reported in 1991: "It was only a few weeks ago that the canton of Appenzell finally gave women the vote, and then it was only because the federal government ordered it to."

Back then, NPR reported, the strike committee encouraged women to dangle dustpans and vacuum cleaners "from windows or [place them] on balconies as a sign of solidarity and of proof that they're not being used." 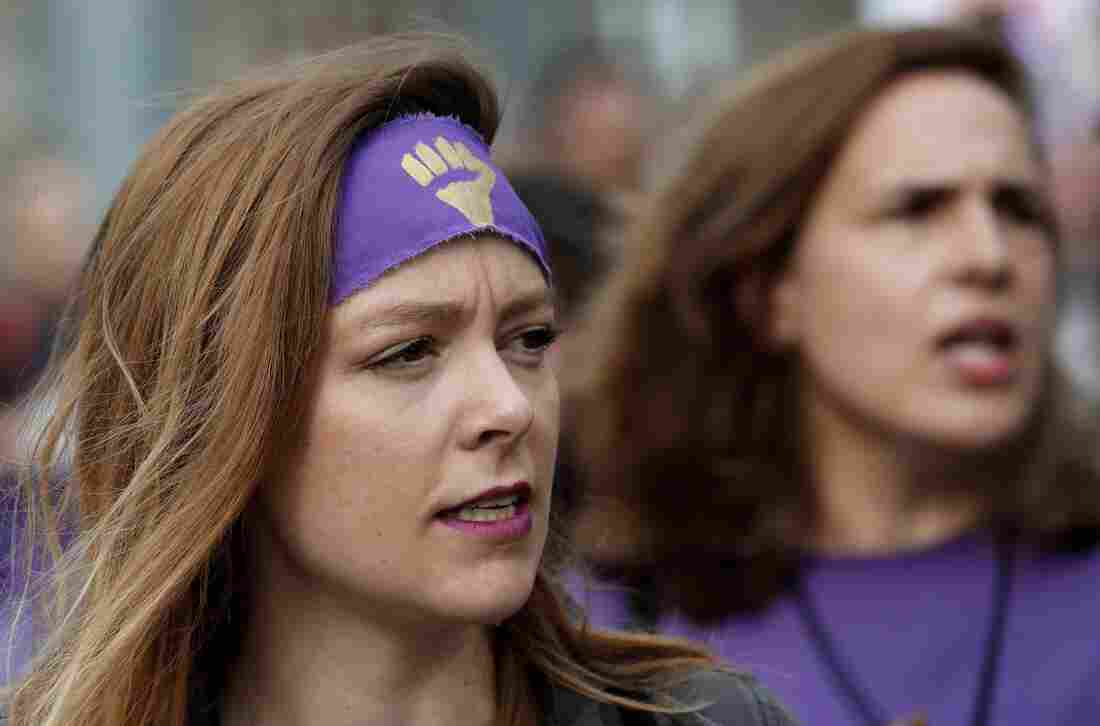 Women have seen progress since then, but they say it's not enough. Switzerland lags behind Europe on issues such as maternity leave. In fact, a recent UNICEF study ranked Switzerland's "family-friendly policies" as the worst in Europe.

And Switzerland's high cost of living sometimes forces families into difficult decisions that can hurt women, teacher Desiree Millet tells Deutsche Welle: "The cost of childcare is so exorbitant that unless both partners are earning high incomes, it makes more sense to stay at home because you can't work part-time in many professions. So, of course, this is expected of the mother, not the father."

In France, The #MeToo Movement Has Yet To Live Up To Women's Hopes

The country's parliament passed a law last year that prompted the demonstrations. The legislation introduces "more scrutiny on equal pay," the BBC reports, but it "only related to companies with more than 100 employees, a measure that women trade union leaders dismissed as virtually meaningless." 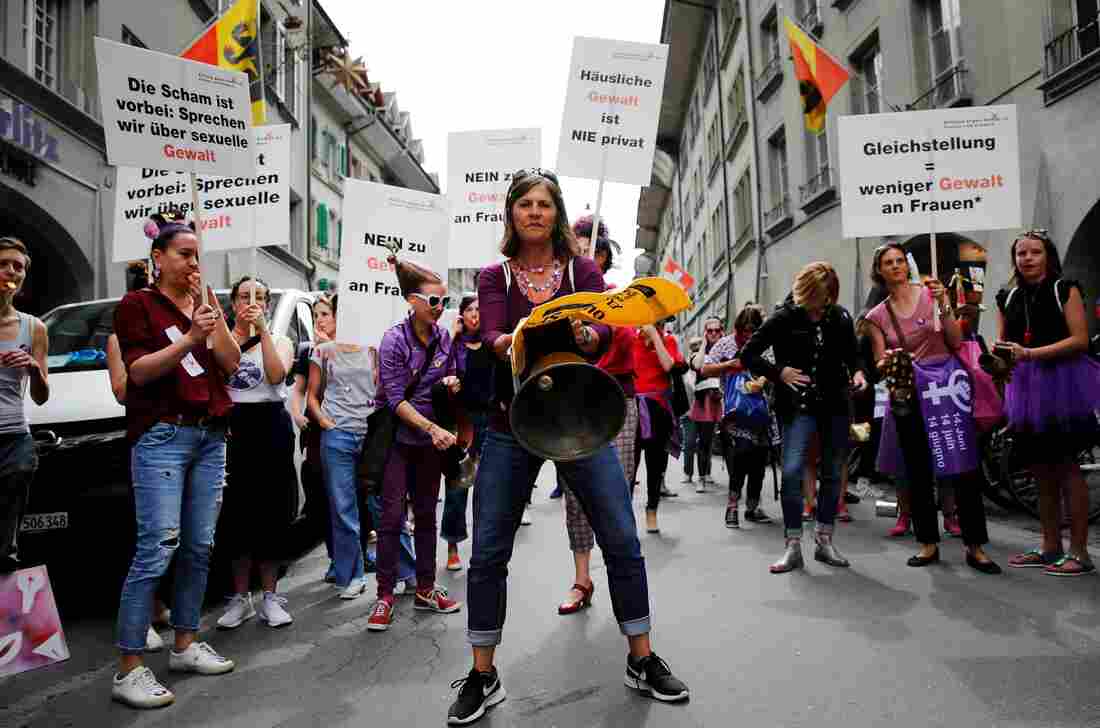 Protesters have been organizing using the hashtags #Frauenstreik and #GrèvedesFemmes, which mean "women's strike" in German and French, respectively.

Of course, there are many women who aren't able to leave work for a whole day. Organizers are encouraging them to head out at 3:24 p.m. local time — 20% less time for 20% less pay.