Accessibility links
Women's World Cup's First Week Brings Stunning Goals — And Controversy A U.S. squad that just might be the best ever is already making history. Italy is doing better than expected, while Brazil and Australia have had rockier paths. 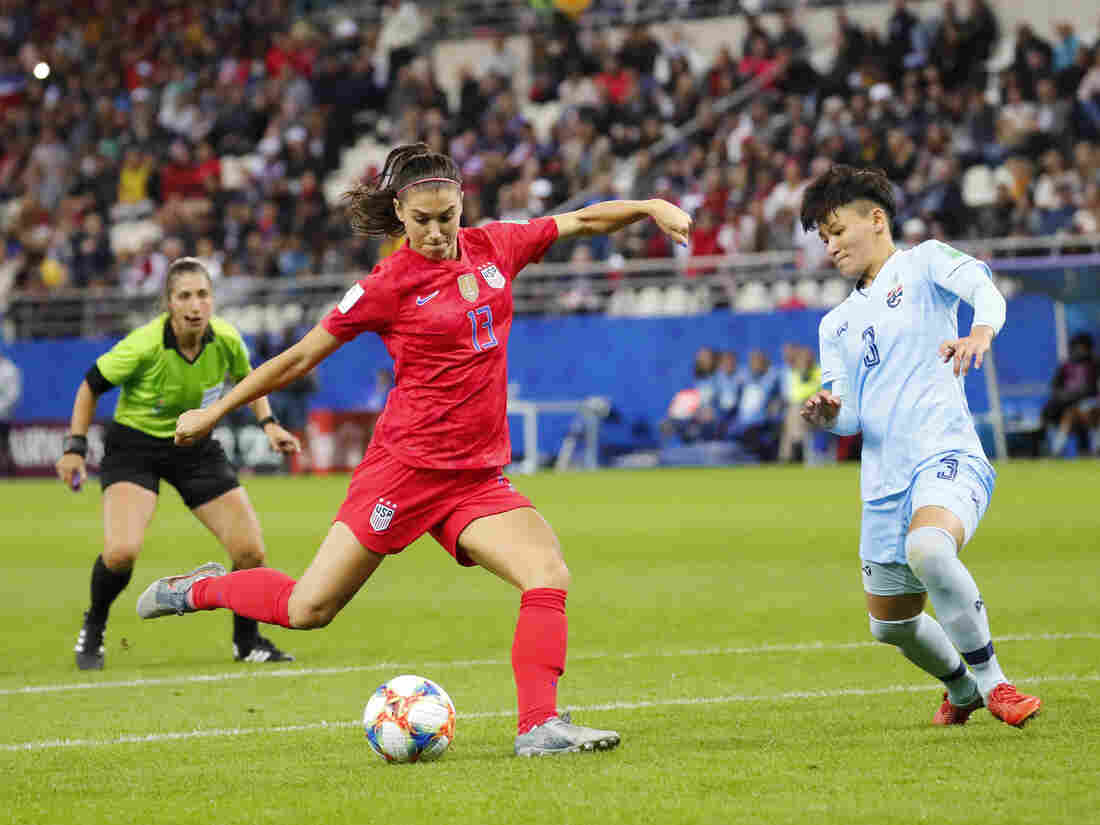 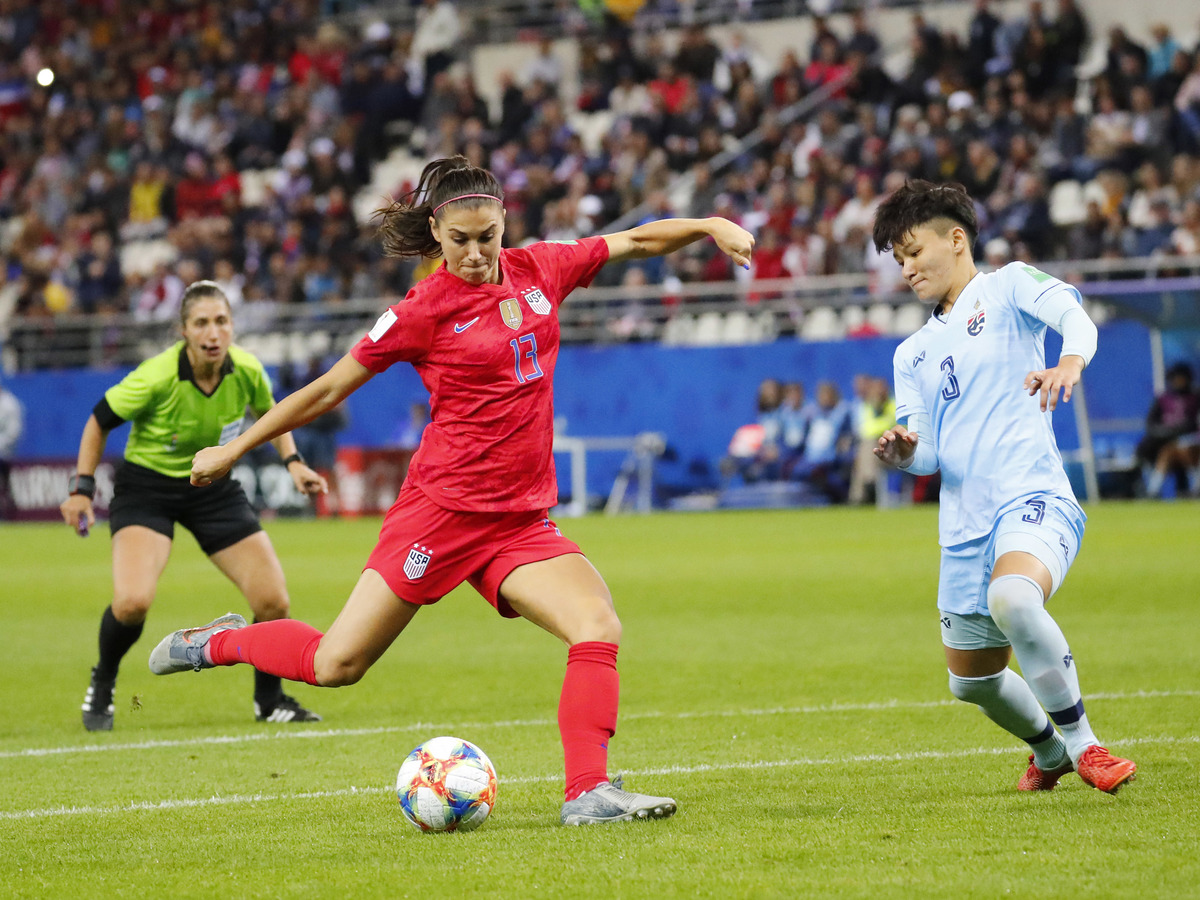 U.S. forward Alex Morgan shoots and scores past Thailand's Natthakarn Chinwong on Tuesday in Reims, France, in the group stage of the Women's World Cup.

In the first seven days of the Women's World Cup, there have already been stunning goals, crushing defeats and no shortage of controversy. We've been following the action from France — oui, un croissant, s'il-vous plaît — and here are some of the key stories we've seen in a week of great soccer.

The biggest story is the United States' demolition of Thailand on Tuesday night, winning 13-0. The game set all kinds of World Cup records: It was the most goals scored and the biggest margin of victory in any tournament, women's or men's; it had the highest number of players — seven — to score in a game; and it tied the record for number of goals in a match — five — courtesy of Alex Morgan. (U.S. forward Michelle Akers had five in 1991, as did Russia's Oleg Salenko on the men's side in 1994.)

And a number of World Cup rookies for the U.S. scored on soccer's biggest stage: Samantha Mewis and Rose Lavelle both had two goals, and Mallory Pugh and Lindsey Horan each notched one. Veteran forwards Megan Rapinoe and Carli Lloyd both scored, as well.

As the history-making game played out in the stadium in Reims, the sense was that we were witnessing an incredible display. While it was no surprise that the U.S. defeated the weaker Thailand squad, the Yanks' goals were impressive, as was their ability to keep up pressure nearly 100% of the time — a testament to the strength of a squad that could be the best ever.

But some observers thought the U.S. celebrated its later goals with a bit too much joy. (One of those observers, a former player for the Canadian national team, says she began receiving death threats.)

But the U.S. shrugged off such criticism.

"We knew that every goal could matter," Morgan said after the game, referring to the fact that goal differential can affect which team ranks at the top of the group. 'When it comes to celebrations, I think this was a really good team performance tonight, and I think it was important for us to celebrate with each other."

Host country France looked powerful — and dangerous to its future opponents — in Les Bleues' opening day 4-0 win over South Korea. Eugénie Le Sommer got the game off to a rollicking start with a goal in the ninth minute off a pass from captain Amandine Henry.

Defender Wendie Renard, who hails from the Caribbean island of Martinique and stands 6 feet, 1 inch tall, scored two headers and showed how France will be a force on corner kicks. And Henry closed off the night with a gorgeous goal in the 85th minute.

WHAT A STRIKE BY AMANDINE HENRY 😳🚀 pic.twitter.com/FwXfNZWYJ6

The U.S. plays Chile on Sunday — a match the Americans are expected to win.

Group C, comprising Australia, Brazil, Jamaica and Italy, is shaping up to be an interesting foursome.

One reason is that Italy came out stronger than expected. Ranked No. 15 in the world, Italy beat Australia (ranked No. 6) 2-1 when they faced off on Sunday. In its second match, Italy clobbered World Cub debutante Jamaica 5-0 on Friday.

Australia is regarded as one of the strongest teams in the tournament, and after that surprise loss to Italy had to take on Brazil. Brazil beat Jamaica in its first game, without Marta, who was recovering from a thigh injury.

As Australia and Brazil faced off on Thursday, Brazil pulled out to an early lead, with a penalty by Marta in the 27th minute and a powerful header by Cristiane in the 38th. But the Matildas came roaring back, with a goal just before the half, another in the 58th and an own goal by Brazil's Monica a few minutes later. Australia became just the second team in Women's World Cup history to come back after a two-goal deficit.

Some questions linger around the Brazilian team. Marta, Cristiane and veteran defender Formiga all came off the pitch early in the Australia match, which could indicate nagging injuries. Formiga also racked up her second yellow card, which means she will miss Brazil's final group-stage match, against Italy on Tuesday.

There has also been only one tie thus far: a 0-0 draw between Argentina and Japan.

After the USA's thumping of Thailand, Carli Lloyd went up to Thai goalkeeper Sukanya Chor Charoenying and gave her a hug and some words of encouragement. Then the two had a very sweet interaction on Twitter.

All you can do is give it your best each and every day. Keep fighting and never give up!! Still 2 more games to play. 😊 https://t.co/pFW4wEK8Nb

"I felt for her," Lloyd told reporters Friday. "In the wins and losses, I think character is a true testament to the sport. ... I just hope they continue to put their head up, continue to fight — and just keep going."