Accessibility links
'Late Night' Stars Emma Thompson In A Role Mindy Kaling Wrote Just For Her Thompson plays a successful TV host who pulled the ladder up behind her in the movie Late Night. Kaling says a female late night host is "science fiction," but this was the role she wanted to write. 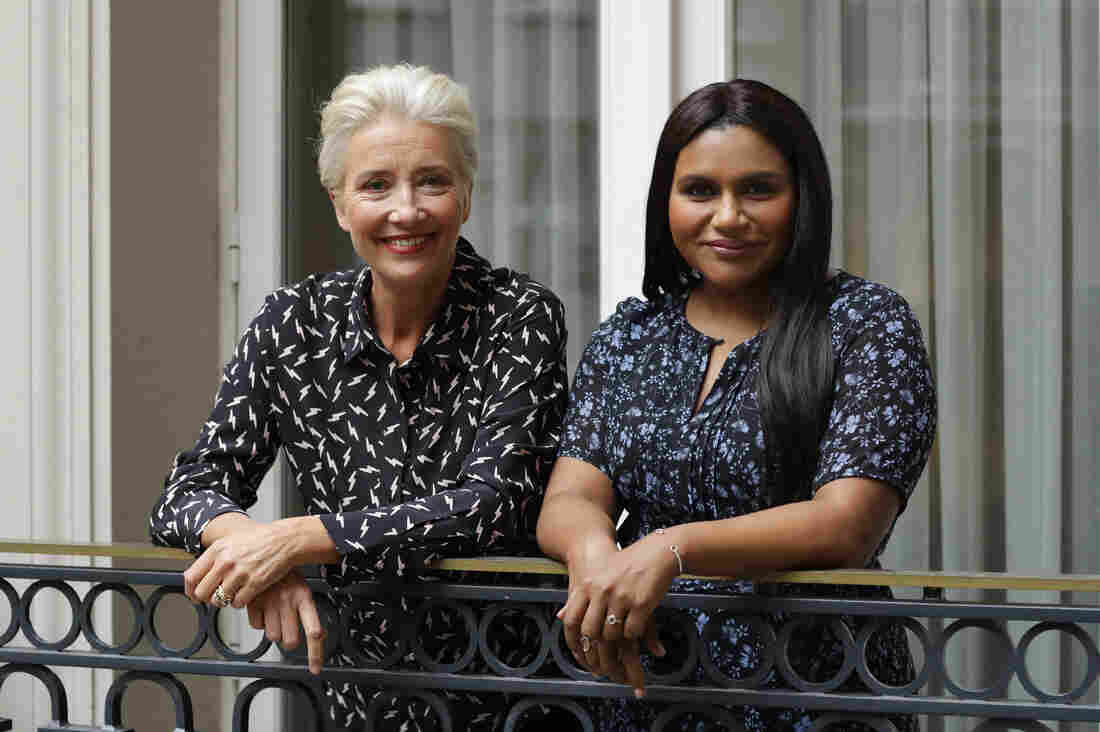 Mindy Kaling, right, wrote the lead role in Late Night with Emma Thompson in mind. They filmed the movie in a "white heat of passion" in 25 days, Thompson says. They are pictured above in London in May 2019. Matt Dunham/AP hide caption 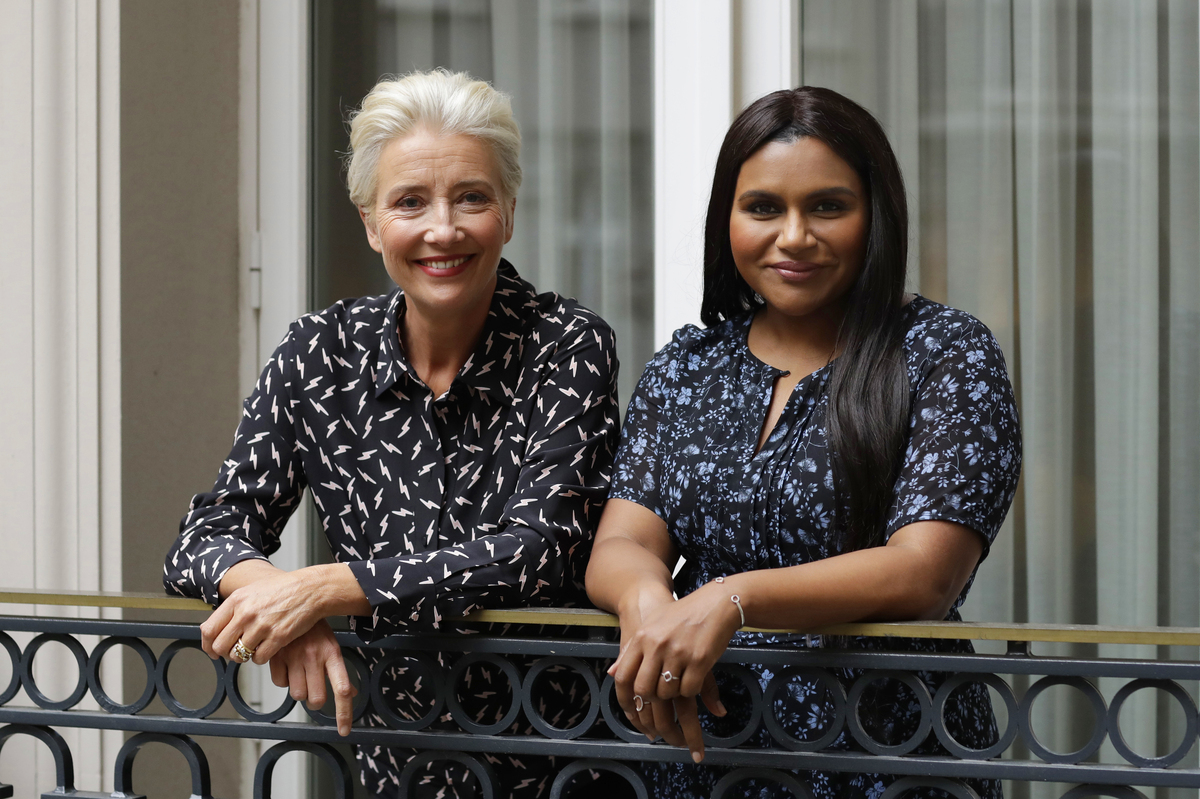 Mindy Kaling, right, wrote the lead role in Late Night with Emma Thompson in mind. They filmed the movie in a "white heat of passion" in 25 days, Thompson says. They are pictured above in London in May 2019.

There's a funny thing about late night TV, says Mindy Kaling. Watching these shows, "there's such a joie de vivre" — but it's at odds with the "ruthlessness and mercilessness" that goes into making the show behind the scenes. "I was obsessed with how all these people could be working so hard and be so competitive to make a product that is so entertaining and light," Kaling says.

Kaling explores that dichotomy — and the racism, ageism and sexism of television — in her new film Late Night. Emma Thompson stars as talk show host Katherine Newbury, a once-popular comic who broke through the glass ceiling of late-night comedy, only to pull up the ladder behind her and settle into a stale, predictable show fed by a crew of all-white, male writers.

Then Molly Patel, played by Kaling, is hired — on a whim, as a diversity hire — and starts to shake things up.

Kaling wrote the role with Thompson in mind. "Emma is my favorite living actor," Kaling says. "I've loved her since I was an 11-year old girl and I saw her in Much Ado About Nothing."

Thompson — a self-described "Luddite" — doesn't watch much television and wasn't terribly familiar with Kaling's work. Feeling a little "irrelevant," she worried that Kaling had perhaps imagined a role for her as "an elderly archaeologist in Dorset."

Thompson read the script and: "Forty-eight hours later rang my agent and said, 'Please tell her that I couldn't be more thrilled and that I will start tomorrow.'"

Kaling and Thompson talked with NPR about the "macho" world of late night, the perception of powerful women, and the connotations of the term "diversity hire."

On writing the role of a female late night host

Kaling: I've wanted to write about late night so much because I'm one of those comedy nerds that was obsessed with it growing up. I read every book about it. I was an intern at Late Night with Conan O'Brien before I moved over into the half-hour world to work on The Office. But that environment is very famous — even among comedy writers — because it is hyper-masculine, hyper-competitive, very ruthless. And I was not interested really, in writing a movie with an older white male lead, which is what we see in a lot of these shows.

I had always wanted to write something for Emma Thompson. ... For me, you know, so many actors can do dramatic roles and we give them awards to do it, but so few can be funny and do drama. ... Emma can do both, and she became very famous doing drama, but she comes from comedy, she comes from sketch. ...

I said I know it's science fiction for there to be a female late-night talk show host — and even more so for her to have had the job for 30 years — but it was the only thing that made sense for me to write.

On playing a female boss who evolves

Thompson: I think there is something a little bit macho about the late-night slot — a little bit 1970s, Saturday Night Live, everybody's up all night taking coke, John Belushi is announcing that "women aren't funny" and it's a tough old world for a woman. [My character] Katherine is the person who managed to survive it ... but she's also bright enough to recognize that she's got to change and she's got to listen. ...

What's so wonderful about this story is: So often when you've got a female boss in a movie, she doesn't change. She's just the evil stepmother, the evil boss, the cold, arrogant, archetype person. But what Mindy's done is create an actual person — a living, breathing person — who, at the beginning, does find it difficult to accept, actually, the fact that she's no longer as successful as she thought she was.

She suddenly realizes that she's been complacent and because she is genuinely committed to being excellent, she decides she's got to change. And it takes a while, but finally Mindy's character does break through to her. They create a working relationship that's so fun to watch developing and doesn't turn all soft and fluffy at the end. It just becomes something very real, very believable and very uplifting.

On female authority being perceived as "cold"

Kaling: Katherine's character does not care what people's reactions are to her honest answers and honest desires. If she sees any kind of inefficiency she calls it out, without anger. And it's interesting — we've been doing press for the movie and everyone has been using words like "bitchy" and "cold," and it's not that she's bitchy and cold, she's just dispassionately expressing what she needs. ...

Thompson: Especially if you're pathologically nice, or you want to be kind to everybody — like me — playing Katherine was a kind of a five-week holiday from having to look after everybody. It was so blissful just turning around to someone who was boring me and say, "I'm not interested, shut up." And then not apologizing for the rest of the week about it. ....

Kaling: A man is entitled to have a private life. ... When I was writing it I didn't particularly think that Emma was cold. I thought that the character was crisp and to-the-point and direct. And those are qualities that are so positive in male leaders. But in a woman, they turned certain people off. People are so uncomfortable with the possibility that a woman would be direct in her communication.

On what the movie says about diversity and hiring

Kaling: We talk a lot in the movie about the fact that Molly is a diversity hire and I can't think of another movie or TV show that really talks about this head-on with that term. The truth of the matter is the term has really pejorative connotations. I was a diversity hire at The Office when I started writing, and it's the reason I had the job — because NBC was paying my salary so that The Office could hire me without having to take a hit on their budget. ...

For years I was so embarrassed by that and I never wanted anyone to know — although of course it was plain as day. It wasn't until years later that I realized that that program and diversity hire is something that I should be wearing proudly, because what it did was it gave me access to work on a show that I would not have had otherwise.

Eliza Dennis and Elizabeth Baker produced and edited this interview for broadcast. Andee Tagle and Beth Novey adapted it for the Web.