Accessibility links
Kristine Lilly Plays 'Not My Job' On 'Wait Wait... Don't Tell Me!' Over the course of more than 20 years, Lilly played in five World Cup finals and three Olympics. She holds the record for the most international appearances in the sport's history. 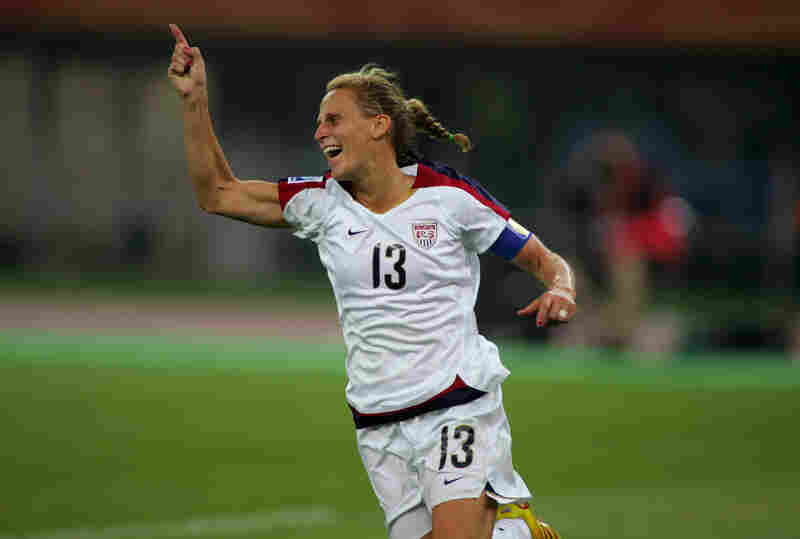 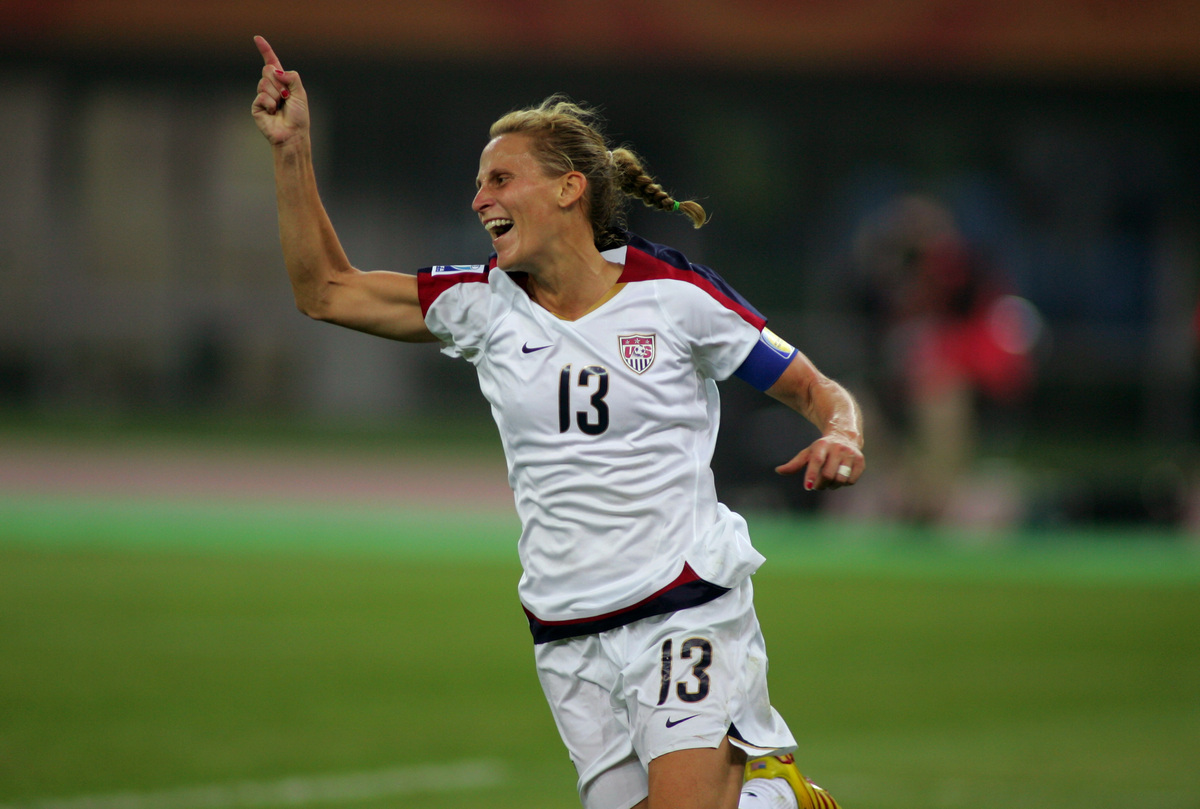 Kristine Lilly reacts after scoring during a quarter final match at the 2007 Women's World Cup.

In her more than 20 years playing for the U.S. Women's National Soccer Team, Kristine Lilly played in five World Cup finals and three Olympics — she holds the record for the most international appearances in the sport's history. Lilly has recently written a book on team-building called Powerhouse.

We've invited Lilly to play a game called "Your cup runneth over!" Three questions about cups that are not the World Cup.

And now the game where we ask somebody who's used to doing great things to do something silly. It's called Not My Job. The U.S. women's soccer team has been dominant internationally for decades, and for more than 20 years, Kristine Lilly was its star. She played in five World Cup finals, three Olympics. She joins us now.

KRISTINE LILLY: Thanks for having me.

SAGAL: Thank you. So just to establish the credentials here, you were on the U.S. women's team for 23 years starting when you were 16.

LILLY: Yes. And I know it's hard to believe.

SAGAL: Wow. So you were on the famous team that won in '99 with Brandi Chastain's final penalty kick.

SAGAL: And you've - you also won in the next and the next, right? How many championships - three?

SAGAL: So now that we're established you know what you're talking about, we've got to ask you about the topic of the week, which was the American match against Thailand. First of all, that was a little unusual, right?

LILLY: It was. I mean, you know, what? I respect the Thailand team. They kept playing. The U.S., you know, was on fire.

SAGAL: I will confess - I'm rooting, of course, for the U.S., of course - but I felt a little pity for the Thai team.

LILLY: No, I did, too. It's tough. You know, I've been on a team that scored a bunch of goals. I was in the World Cup in '07 and lost to Brazil 4-0 in the semifinals, which was - felt like it was 10-0. So it's hard to be on the other side of it. But I - like I said, I respect Thailand. They kept their heads up. They can look at it that way and maybe forget about the score for now.

SAGAL: Yeah, that's not going to happen. But...

SAGAL: What is it like to be an American playing soccer? And we all know soccer is not one of the big sports here in America. Famously, Americans don't care about soccer. Do the - do, like, the Europeans and the Brazilians, the traditional soccer powers - do they get frustrated because it's Americans who are thrashing them?

LILLY: Well, I don't think they like us very much.

LILLY: It was pretty mutual playing, but that's what made it competitive. That's what made great rivalry. And now we can sit and talk about it and share what we've learned through playing the game and what, you know, the women's game has grown into now.

SAGAL: Do you still dislike them a little bit?

HELEN HONG: Do you know a lot of Norwegian curse words?

HONG: Is that one?

JORDAN CARLOS: Oh, I thought that was one.

SAGAL: She doesn't learn Norwegian curse words. She inspires them.

LILLY: The difference I would say right now - the men are a little bit more dramatic.

HONG: Those men are just so overemotional.

SAGAL: So do your kids play soccer?

LILLY: They do. I have two daughters, and they both play soccer.

SAGAL: Oh, my gosh. So what kind of soccer mom are you?

LILLY: I get to say the things. But sometimes, I'm, like, oh, my gosh. I really want to say something right now, but I can't.

SAGAL: So wait a minute. You help coach.

SAGAL: So that means there's a coach.

SAGAL: And this poor woman...

LILLY: You nailed it.

SAGAL: Yeah, I bet she does.

SAGAL: And are you gentle about it? Oh, coach, you know, it's just an idea, but maybe you could try to win a game? I mean, is that...

SAGAL: I'm sure you are.

SAGAL: And how are you with your daughters? I mean, are you - do you, like, you know, give them a talking-to if they don't play to their potential? Or are you one of those everybody-is-a-champion kind of people?

SAGAL: Get that participation trophy out of my house.

SAGAL: You ever been tempted to cut one of your daughters from the team?

SAGAL: Well, Kristine Lilly, it is a pleasure to talk to you today. But we have invited you here to play a game we're calling...

BILL KURTIS: Your Cup Runneth Over.

SAGAL: You, of course, are a World Cup champion. But what do you know about the world's other cups? We're going to ask you three questions about many different cups.

SAGAL: Answer two correctly, you'll win a prize that is not a cup for one of our listeners. Instead, it's the voice of their choice from our show. Bill, who is Christine Lilly playing for?

SAGAL: All right. Ready to play?

SAGAL: I can feel you, like, getting ready to go.

SAGAL: I know. I know. Here's your first question. We've had cups of one kind, of course, for thousands of years. In fact, Pythagoras, the ancient Greek mathematician, was a pioneer in the cup field as well. What did he invent? Was it, A, the novelty gift cup...

SAGAL: ...With the message world's best mathematician on it...

SAGAL: ...B, the prank cup, which spilled wine all over the user when he tried to take a sip; or C, the travel mug - in his case, a cup designed to be latched to the saddle of a horse?

SAGAL: You're going to go with C. It was actually the prank cup.

SAGAL: Pythagoras, the great genius mathematician, invented the prank cup. And it's really ingenious. If you pour in too much wine, it all of a sudden drains out onto your lap.

SAGAL: I notice, by the way, Kristine has stopped laughing. She is, like, wait a minute.

SAGAL: Next question. We all know and love Japan's famous cup-o-ramen. You know, it's a styrofoam cup. You pour in water, you get ramen noodles. It's great. Other countries have their own version, too, like which of these? A, Russia's cup-o-mashed potatoes; B, Canada's cup-o-bacon; or C, Sweden's cup-o-herring?

LILLY: Oh, man. What was the first one again?

SAGAL: The first one was Russia's cup-o-mashed potatoes.

SAGAL: You're going to go with that.

SAGAL: You're right, of course.

SAGAL: The cup-o-instant mashed potatoes is available in chicken, beef, onion and crouton flavor. And I'm going to be honest - it sounds great.

SAGAL: Our last question - this is - you can think of this as the shoot-out. If you win, you win.

SAGAL: All cars have cup holders now. That's passe. That's boring. The real innovation in drinking while driving is which of these? A, the top-of-the-line Mercedes Maybach, which comes with sterling silver champagne flutes for each passenger; B, the new model Honda Odyssey minivan, which has holders for juice boxes in the ceiling so you can hang them above your kids like IV bags...

SAGAL: ...Or C, the new Ford 150 Tailgate Edition pickup, which has a built in beer keg and tap?

LILLY: Oh, these things are all just wrong.

LILLY: Oh, wow. I'm going with the minivan with the drip.

HONG: Oh. The audience is rioting.

SAGAL: ...Above their head, run the straw down to their mouth.

LILLY: I think it's more like A, but I don't agree with it.

SAGAL: So in other words, you think A is the right answer, but you just think it's a wrong thing to have. You think it's...

SAGAL: Well, the truth doesn't care about your feelings.

SAGAL: So you're going to pick it?

SAGAL: You are right, of course.

SAGAL: This is a $200,000 luxury sedan, and you'd better believe for that amount of money it comes with a little fridge to keep your champagne cold.

SAGAL: Yeah. Yeah. Bill, how did Kristine Lilly do on our quiz?

KURTIS: Kristine, you can hang another award up because you won our quiz.

SAGAL: Kristine Lilly is a Hall of Fame soccer player. She's played in five World Cups and three Olympics. Her new book on team-building, "Powerhouse," is on sale now.

Kristine Lilly, thank you so much for joining us.

SAGAL: Thank you, and good luck to your former teammates in the World Cup.

SAGAL: In just a minute, Bill has a new way to get you to eat your vegetables in the Listener Limerick Challenge. Call 1-888-WAIT-WAIT to join us on the air. We'll be back in a minute with more of WAIT WAIT... DON'T TELL ME from NPR.