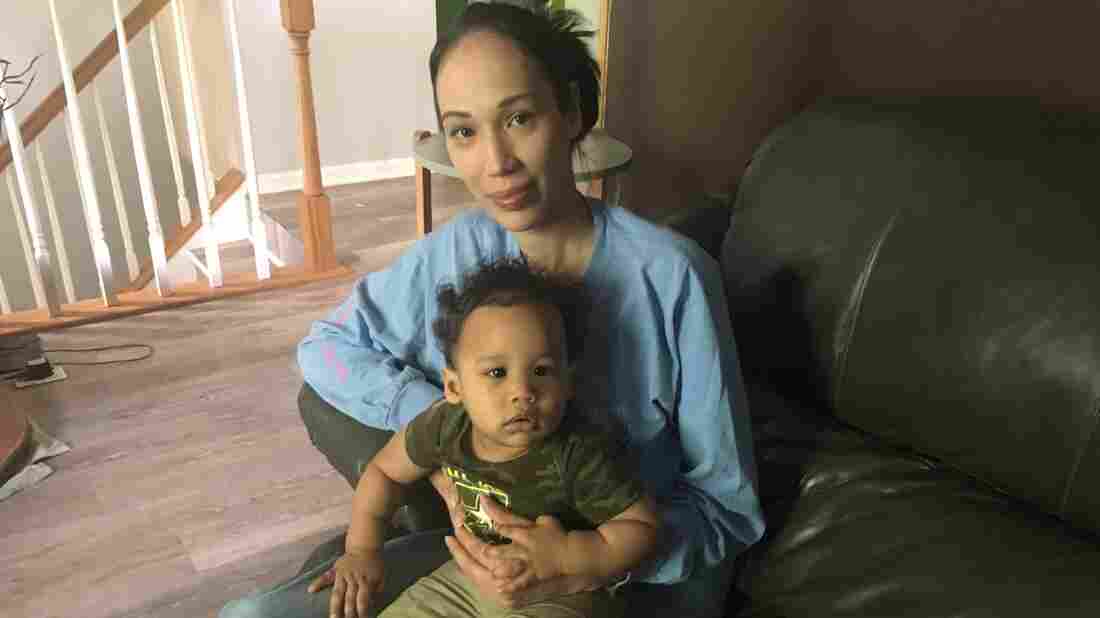 Natalie Lynch at a relative's home with her youngest child, Maycen. In 2014, when Lynch was pregnant with her older child, she spent two weeks before giving birth in a prison cell, mostly alone. Sarah McCammon/NPR hide caption 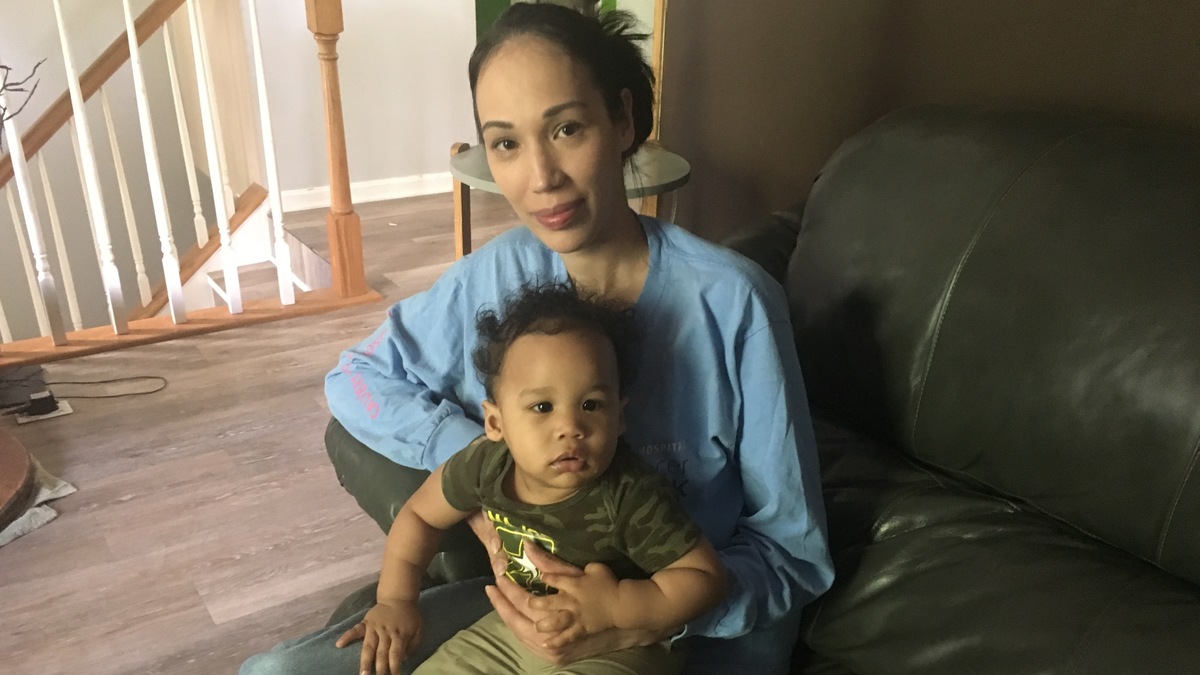 Natalie Lynch at a relative's home with her youngest child, Maycen. In 2014, when Lynch was pregnant with her older child, she spent two weeks before giving birth in a prison cell, mostly alone.

For many expectant moms, the tedious final days before the due date are spent going to baby showers, stocking the refrigerator, or getting the nursery ready.

Natalie Lynch spent the last two weeks of her pregnancy in a prison cell, mostly alone.

With female incarceration rates rising in the United States, prisons and jails across the country are contending with new challenges, including caring for pregnant women. Sometimes, those inmates are being housed alone — in medical units and other types of isolation — for days or weeks at a time.

Now, a handful of states, including Maryland, Texas, Georgia, New Mexico and Nebraska, are beginning to move away from incarcerating pregnant inmates by themselves.

When Lynch gave birth in 2014, pregnant inmates at the state women's prison in Jessup, Md., were routinely sent to a medical unit, separate from other inmates, she said. She was already pregnant when she arrived to begin serving her sentence for felony drug charges.

Lynch said she briefly had a roommate there, but most of the time she was alone in a small cell. She saw prison staff when they came by with a meal tray or, to check her vital signs. Occasionally, she said, a "cool officer" would let her get out to walk around.

"There was one other [inmate] that would do that — walk around — she wasn't there in the head but I would talk to her, even though she would tell the same story over and over and over again," she said. "It was something."

Lynch said she needed the exercise, and it was better than sitting alone with her thoughts in those final days as she prepared to give birth to a daughter she knew would be taken from her soon after her birth and given to a relative.

"It's depressing, cause I knew that I would have my child, maybe spend two days with her, and that's it," Lynch said.

There's no data on how often pregnant women are locked up alone in the nation's prisons and jails. But Amy Fettig of the American Civil Liberties Union's National Prison Project said it happens for a variety of reasons - sometimes for medical observation or as punishment for minor infractions.

"Because there's so many more men in the system, and the systems are built by and for men, I think you can safely say, women's unique needs are often overlooked or considered an afterthought," Fettig said. "So we see practices like placing women in solitary confinement when they're pregnant; we see hideous practices like shackling them when they're giving birth, all done as a knee-jerk reaction to how the system treats men."

The American Correctional Association did not respond to requests for comment on this story.

Reached by phone recently, Warden Margaret Chippendale of the Maryland Correctional Institution for Women declined a request for a taped interview. But when asked about isolation of pregnant inmates, she said, "I'm gonna stop you right now. I'm really tired of reporters taking the position that pregnant inmates are isolated."

In a statement, a spokesman said the Maryland Department of Public Safety and Correctional Services cannot comment on Lynch's experience because of privacy rules, but said that pregnant women there "are not placed in restrictive housing" and that they are admitted to the medical infirmary two weeks before their due date "to provide the best medical care and protect them from being injured among the general population during the critical period."

Georgia's governor recently signed a similar law. Terry Norris of the Georgia Sheriff's Association said while his group did not oppose the bill, he's had some concerns.

"There are a lot of inmates in our county jails and prisons throughout this country ... that suffer mental illness of some sort," Norris said. "And in some cases that inmate's safety, male or female, is better served if you can place them — I don't call it solitary confinement, I call it isolation — but keep them from other inmates."

Kim Haven, an advocate who helped push through Maryland's law, says prisons and jails have used many different terms to describe what's essentially the same practice.

However it's labelled, it's dangerous, said Dr. Carolyn Sufrin, a gynecology and obstetrics professor at Johns Hopkins.

"Solitary confinement is in no way, shape, or form something that a pregnant person should be placed in," she said.

Sufrin says being isolated can cause psychological trauma. Pregnant women are at risk for dangerous blood clots if they're not able to move around freely. And Sufrin says they need medical personnel close at hand.

"We have evidence to show that people — including pregnant people in restrictive housing — often have impaired access to medical care," Sufrin said.
"And this can lead to their medical needs being overlooked, leading to dangerous situations for pregnant people."

Earlier this year, Tammy Jackson, an inmate at the Broward County, Fla., jail, went into labor by herself, in the middle of the night, in a mental health unit where she was being housed.

ACLU attorney Eric Balaban said it took awhile for the guards to respond and notify the doctor on call.

"The doctor said that he would check on Miss Jackson when he arrived at work later that morning," Balaban said. "By the time the doctor got to work at 10 a.m. — some seven hours later — Miss Jackson had delivered her daughter on the floor of her cell, alone."

In a statement, the Broward Sheriff's Office said Jackson and her baby were provided with health care after the delivery, and officials are investigating.

For many women, the concern about isolation in prison doesn't stop with the birth. Natalie Lynch said corrections officers at the prison in Maryland took her to a hospital to deliver and recover for a couple of days, before bringing her back to the prison's medical unit.

"I bawled my eyes out when they took my daughter from me," she said. "And that was it. Back in the van. Back to the prison. Back to that room all by myself."

Like many babies born to women in prison or jail, Lynch's daugher was taken in by relatives. What made matters worse, she says, was going back to that cell in the medical unit, facing postpartum recovery.

"I'd feel my stomach and she's gone, and I don't have that companionship anymore even though it was just little kicks that I would feel. I mean, it was something," Lynch said. "At that point, it was like I had nothing."

Some states, including Maryland, are also banning the solitary confinement of patients during an eight-week period after the birth, a time when advocates say new mothers are especially vulnerable.

Lynch is 30 now, living in coastal Maryland and taking care of her youngest child, a son, born last year. She said having a new baby has been healing, but she misses her daughter, who's still in the custody of a family member.

"It's kind of filled that little void that I had ... doing things with him that I should have been able to do with her," Lynch said. "It's kind of bittersweet."

Lynch is working as a machinist, trying to save up enough money for a more stable living situation — and hoping to one day get her daughter back.