Accessibility links
Book Review: Frank Langfitt's 'The Shanghai Free Taxi' Delves Deep Into China's Troubles NPR's Frank Langfitt wanted to get to know the real China, so he started a free taxi service in an effort to have conversations with a variety of people. His new book is the result of this reporting. 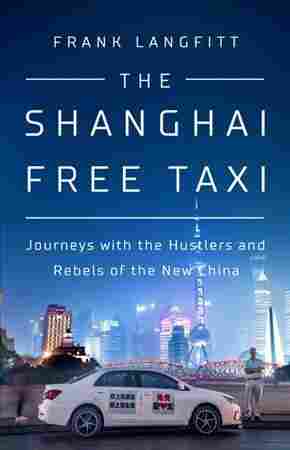 Journeys With the Hustlers and Rebels of the New China

One of the best ways to get know a country is by talking to its people.

NPR correspondent Frank Langfitt, who has covered China and other countries over a span of nearly two decades, proves this in latest book, The Shanghai Free Taxi: Journeys with the Hustlers and Rebels of the New China. The book is a master class on how to chronicle a changing country through the personal narratives of its citizens.

Langfitt wanted to learn about China by talking to a variety of individuals from all walks of life, so he tried to become a taxi driver in Shanghai. The Chinese government wouldn't allow a foreigner to do that job, so Langfitt found a loophole and created a free taxi service offering rides in exchange for conversation. The next few years were full of talks with a wide range of intriguing characters representative of the new China, its history, and its contemporary struggles.

Langfitt drove, listened, asked questions, and took notes and recordings of his encounters. The result was a wealth of knowledge that covered everything from finances to relationships and from the gaps between inner China and its monstrous metropolises to the language barrier between Mandarin speakers and those who only learned local dialects. The Shanghai Free Taxi collects that knowledge and offers an outstanding, touching, honest chronicle of China, arguably America's most important competitor, as it adapts to inner changes and worldwide events.

The Shanghai Free Taxi works mainly for two reasons: Langfitt's educated, simple reporting — and the cast of characters that populate the book. There's Chen, a man separated from his family who runs a small underground Christian church despite it being illegal because the "Communist Party is particularly concerned about Christianity because of its power to move people and potential to drive political change." Then there are Rocky, a farm boy from a province in inner China who became a lawyer in Shanghai; Beer, a touchy, strange car salesman who tries to sell Langfitt a used car to use as a taxi; and Sarah, a young migrant woman trying to find a place to live in an overcrowded, expensive city. But perhaps the most outstanding characters in the book are Crystal, a woman looking for a disappeared sister, and Winnie, the missing sister — whose past of shady business, being a mistress, prostitution, threatening letters, and a falsified pregnancy test compel Langfitt describe her story as "Chinese noir."

Langfitt wears various hats throughout the book, among them: reporter; interviewer; driver; helper; potential scam victim; and detective. However, despite the multiplicity of personalities he embodies, he always remains in tune with his purpose: to report the inner workings of a world power facing slowing economic growth, inequality, corruption, political oppression, and a crisis of uzhi, meaning poor character or inner quality. And he does so while being an outsider and constantly comparing China and America. He writes:

"This is a difference between a traditional Chinese approach and that of many Americans. In China, you should try to take more time, be patient, be oblique, keep your feelings hidden. In conversations, you touch on the main point, chat about other things, then circle back. Many Americans are more direct and less concerned with concealing anger."

The Shanghai Free Taxi delves deep into China's troubles. It describes the good, the bad, and the ugly with fairness and honesty. Langfitt loves the country, but isn't afraid to reflect its darkest truths, both historical and contemporary. For example, readers learn that in China keeping a mistress is common among successful businessmen and government officials. A 2013 study from the People's University Langfitt cites reported that "nearly all corrupt officials had adulterous affairs and 60 percent kept a mistress." These women, knows as ernai, "second wife," are so embedded into the culture that what they do is "seen as an occupation and includes a contract." The ernai, which make up what is known as the "mistress-industrial complex," usually get a monthly allowance and an apartment, both of which depend on "the tier of the city where they live and their perceived market value." And the darkness doesn't end there. Langfitt captures China's zeitgeist perfectly and unapologetically:

"The fear of the unknown was powerful in China. On the streets every day, you didn't know whom you could trust and who might try to do you harm. You could never be sure if the food you ate was safe or just how much damage you were doing to your lungs — or the lungs of your children — by breathing the air. Even amid all the new prosperity, being Chinese meant learning to live with uncertainty."

The free taxi was, literally and figuratively, a vehicle that would allow Langfitt to "learn what ordinary people wanted, how they saw themselves, their country, and the wider world." This book proves the experiment was a success. It blends memorable characters with perceptive observation and informed political analysis to give readers a deep, nuanced look at the world's other superpower at this stage of its long, ongoing, rich history.