Accessibility links
NPR Review: 'Angola Janga,' By Marcelo D'Salete Marcelo D'Salete's powerful graphic novel chronicles the mocambos, communities of runaway slaves that flourished in the jungles of 17th century Brazil, and all the lives they touched, slave and free. 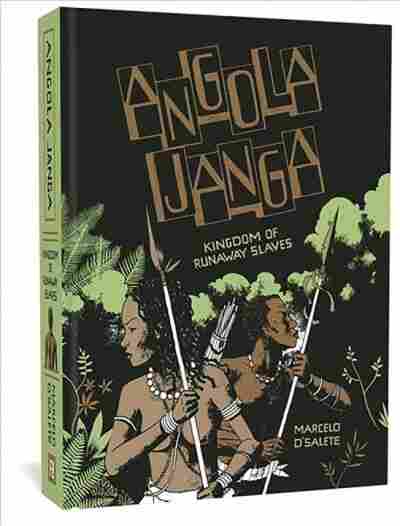 Sometimes the greatest stories are forever out of reach. Such is the case with innumerable tales of the mocambos, communities of runaway slaves that took root in the jungles of Brazil in the 1600s. And such is the case with the stories that make up Marcelo D'Salete's Angola Janga. In this massive graphic novel, D'Salete relates the history of the villages that provided havens for freedom-seeking runaways — and presented a perennial threat to the whole institution of slavery in Brazil. Working in black and white, mixing nonfiction and fiction, D'Salete aims to capture the lives and conflicts of the vast spectrum of individuals the mocambos touched: slaves, runaways, slave hunters, free-born village dwellers and conflicted leaders defying astonishing odds to keep their people free.

D'Salete focuses on Palmares, a collection of more than a dozen settlements that "at its peak ... comprised more than 20,000 people." ("Angola Janga," or "Little Angola," was the inhabitants' name for it.) D'Salete gets the 20,000 number, along with the rest of his information about the settlements, from a huge collection of sources he lists at the end of the book and references throughout. These, along with existing fictional treatments he mentions in the afterword (including three other graphic novels), attest to centuries of fascination with the mocambos. The mass of supporting references also has the paradoxical effect of highlighting just how little we can know about these communities and their people. Despite historians' best efforts, most of the documentation we have about the mocambos comes to us from the point of view of the slaveowning Portuguese colonists.

Still, D'Salete's story is impressively comprehensive. A Brazilian comic artist, illustrator and teacher, he's spent years researching the institution of slavery in his country. In 2017 he published the award-winning Run For It: Stories of Slaves Who Fought For Their Freedom. Angola Janga builds seamlessly on the earlier book, further exploring how a yearning for freedom combined with inhospitable local terrain encouraged countless slaves to head for the hills — and allowed some to evade recapture there. Besides the afterword and list of references, D'Salete includes a detailed glossary, a chronology of the government's century-plus' worth of assaults on Palmares and several maps. The reader learns of chiefs like Zumbi, who helped lead Palmares from the mid-1670s until he was killed in 1695, and the female leader known as the "Queen of Palmares," seized by soldiers in a 1677 attack. D'Salete recounts many such campaigns to split up, undermine and ultimately destroy the mocambos. And he describes fascinating bits of folklore like the Sona, symbols that some runaways followed to the villages.

D'Salete's approach emphasizes that although the historical record has plenty to say about the Portuguese colonists' campaign against Palmares, it tells little about what life was like there.

Despite all this — and some 400 pages of art — Angola Janga is only partially satisfying. D'Salete follows several memorable characters throughout the book: Soares, destined to become a traitor; mocambo-born Francisco, captured as a baby and raised by a priest; the terrifying soldier Domingos Jorge Velho; and Dara, an inquisitive village child with an uncertain future. But though he establishes these characters fairly well, D'Salete relates their adventures in an impressionistic style that can be tough to decode. Often, he'll depict important incidents as choppy closeups split between several panels. It can be hard to tell what's going on and, since he follows some characters from childhood through adulthood, just who is whom. He certainly captures the terror and torment of the ex-slaves' continual battles for freedom, but his people and their stories feel scanty.

And yet, while it leaves the reader wanting, this weakness also serves to dramatize just how tragically fragmentary our information about the mocambos is. It may be that a graphic novel like this one is uniquely able to evoke history's gaping lack. D'Salete's approach emphasizes that although the historical record has plenty to say about the Portuguese colonists' campaign against Palmares, it tells little about what life was like there.

The sparseness of D'Salete's characterizations indicates just how much is missing — how little we can know about these people's lives. In some sections D'Salete veers away from narrative into pure impressionism, meditating graphically on the sights and sensations of slavery and freedom. These pages combine with his staccato action panels to reflect a flickering light of truth, falsehood and silence. D'Salete seems to say that whatever he may do, the stories he seeks to tell will never be complete.