Accessibility links
These 'Ties That Bind' Explore Life With Father A group of women calling themselves the Catskilled Crafters took apart hundreds of donated neckties to make fabric art exploring their relationships with their fathers and the men in their lives.

These 'Ties That Bind' Explore Life With Father

These 'Ties That Bind' Explore Life With Father

In the fall of 2017, a dozen women in New York's Catskill Mountains came together for a craft project. Many of them were New York City transplants, and most were either retired or semi-retired; they needed something to occupy their minds and hands during the long, snowy Catskills winter.

What they found was old neckties, hundreds of them, which they cut into small hexagons to make a quilt — of sorts. The group, which dubbed itself the Catskilled Crafters, pieced the hexagons into a giant 10-foot-long tie called Big Daddy, and dozens of foot-wide hexagonal cloth "vignettes." Local sculptor and performance artist Wendy Brackman became a mentor to the group. She named their project The Ties That Bind — and all of it is now on display in the American Visionary Art Museum in Baltimore.

They're hanging in what's called the Father Room, as part of an exhibit called Parenting: An Art without a Manual. The Crafters talked about their fathers as they sewed, and gradually got to know each other as they worked on the project, which includes six-word memoirs about their fathers that hang on the wall on either side of the vignettes. Some of them are sweetly poignant:

But some of the memories aren't so happy:

Spoke many languages. We never spoke.

Worshipped his wife. Tolerated his kids.

Dressed well to cover his flaws.

He wanted sons, got me instead.

Crafter Gail Freund lost her father a year and a half before the project began, and used his silk tie and a tie that belonged to one of his best friends as part of the work. A former magazine and newspaper illustrator who also spent years designing costume jewelry, Freund says "it was really comforting to do a lot of sewing and handle their stuff. It was very meditative." 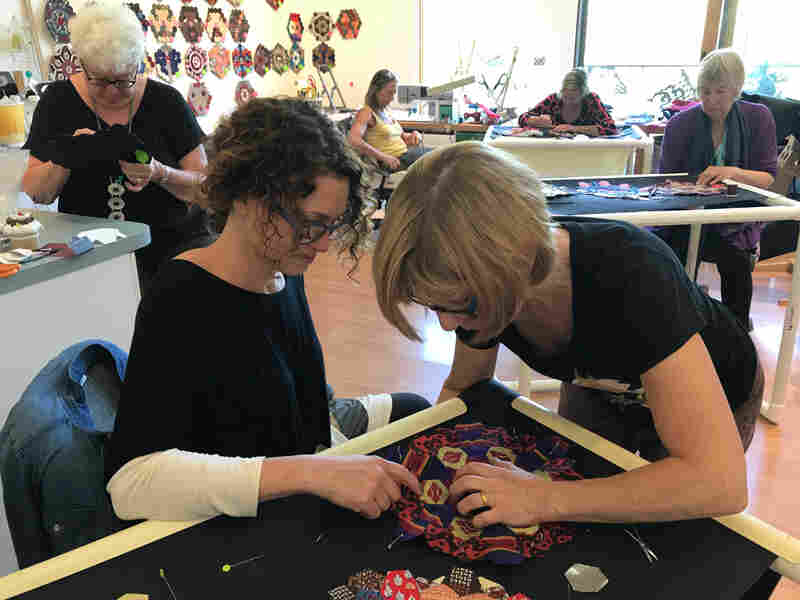 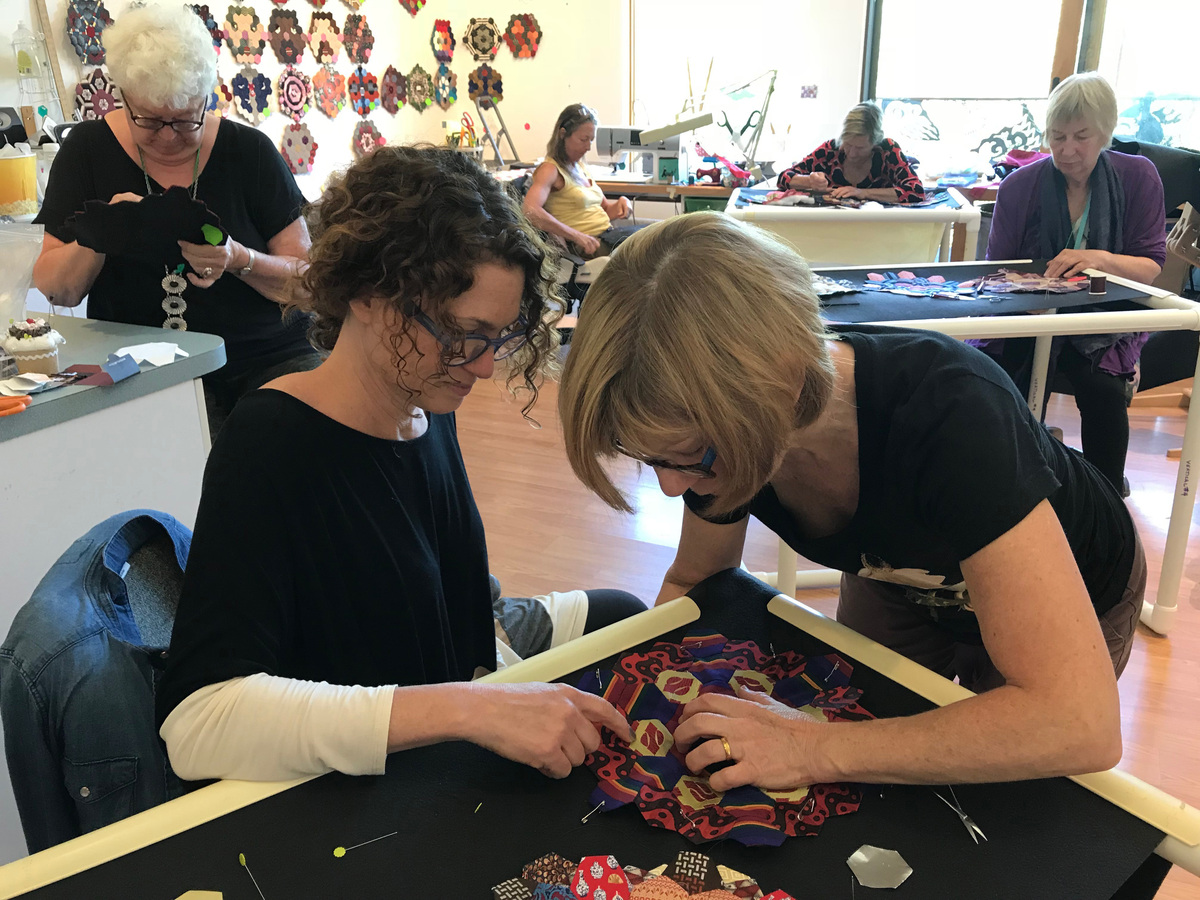 "When I moved up here, I never expected to be sewing. It was refreshing to do something with my hands," she adds. "The most important thing was being part of a community and having new friendships."

The Crafters credit Brackman for guiding them through an elaborate construction process that borrowed from both English paper piecing — which involves stabilizing fabric around a paper shape before sewing the pieces together — and fussy cutting, a trend in quilting that results in a kaleidoscopic effect with repeat designs. In addition to her experience as a sculptor and advanced quilter, Brackman has had a career as a globe-trotting performance artist known as Wacky Wendy, who appears at corporate parties making intricate hats with colored paper plates, a pair of scissors and a stapler — all while delivering groan-inducing Borscht Belt shtick.

"Every quilter thinks some day they'll make something with ties," Brackman says. "I considered the tie like an animal pelt. There's just so much you can use. You have to use it sparingly and you have to use it well."

The Crafters solicited donations of old ties local from community and recreation centers, but the majority of the 1000-plus ties they used for the project came from a woman Brackman described as a "tie hoarder," in the tiny town of Phoenicia. Their initial visit to the hoard — which reportedly held 10,000 ties — yielded a suitcase full of at least 500, ranging from wide colorful 1970s ties to what one Crafter described as Wall Street ties. The Crafters washed, opened up and ironed the ties before cutting them into piles of tiny hexagons — some ties only yielded a few "hexies," while ties with repeating patterns could be cut into many more.

It was really comforting to do a lot of sewing and handle their stuff. It was very meditative.

"I like the idea of opening them up and taking them out of their context," says Freund.

It took a total of 37 hexies to make each foot-wide vignette. Freund used Photoshop to manipulate the little scraps of fabric in scans of her vignettes. Her fellow Crafter Pamela Martin — a yoga teacher who once ran an antique textile business — used a similar process, and once she'd laid out her hexies in a pattern, she'd snap a phone picture and send it to Brackman or one of the other Crafters — who would suggest changes as small as replacing a single piece.

"We were collaborating over the phone," says Martin, who found the mix of vintage fabric, craftiness and a community project "irresistible." She says she was inspired by Brackman's relentless determination to keep re-working a design before sewing it together permanently. "She was tireless. She'd just rip it apart and say, 'That didn't work.' And start all over again."

In addition to the donated ties, Martin incorporated ties belonging to her brother, who died suddenly that winter. She also lost her sister-in-law, who she spent time with, sewing hexies together alongside the sister-in-law's hospital bed. 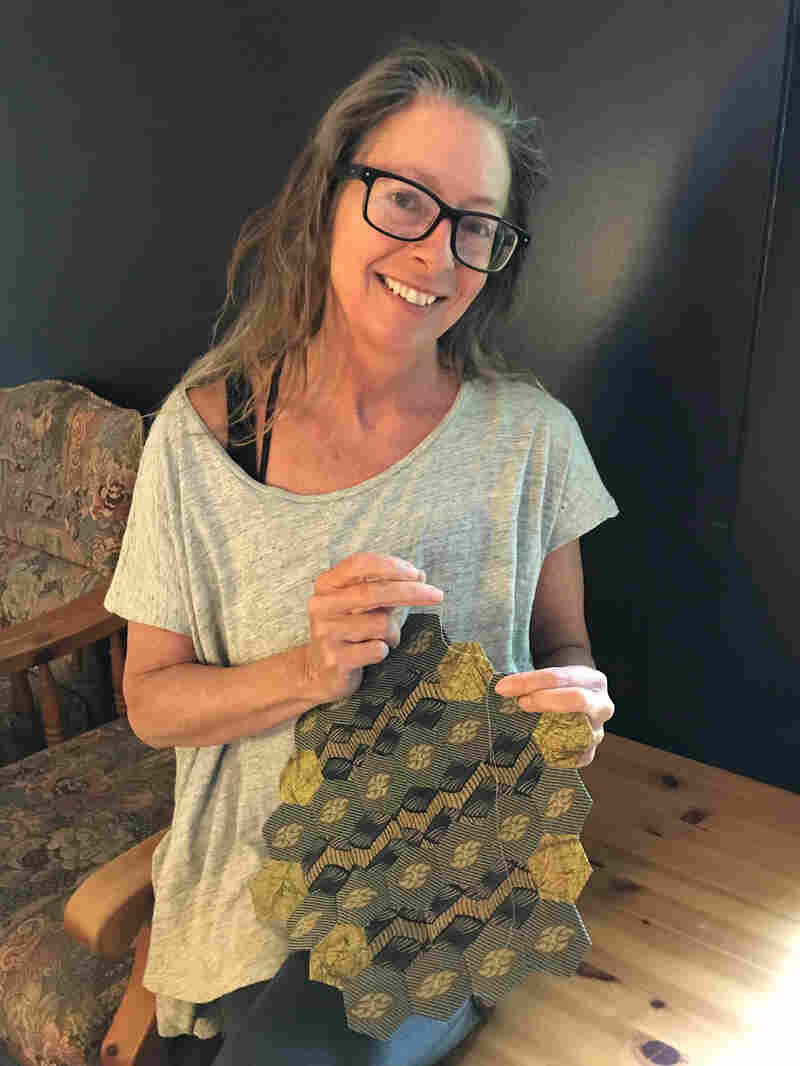 "For me it was great project to work through things," said Martin. "It was just a really helpful thing to do, very therapeutic."

During the process of sewing the 10-foot tie and the 96 little vignettes, the women often worked in Brackman's spacious home studio. The work process, as well as the museum opening in Baltimore, were documented in videos shot by Freund.

"Do you have hexies, sweetheart?" Brackman inquires in one video. "This is such a painting!" she exclaims a few minutes later, assessing a finished vignette.

"What makes this project so exciting is you're not going to know what you're going to get until you get it," Brackman explains. "It's a picture that reveals itself. You get it halfway and it tells you what it wants to do, which is what I think great art is."

The Catskilled Crafters have moved on to a new project now: They're all making individual fabric books, with 15 themes arranged in the same order. And they've welcomed some new members, including a 94 year-old artist named Polly Vos.

But if you're in the Baltimore area, you can still see Big Daddy and the accompanying 96 hexagonal vignettes — they're on display at the American Visionary Art Museum until September 1st.