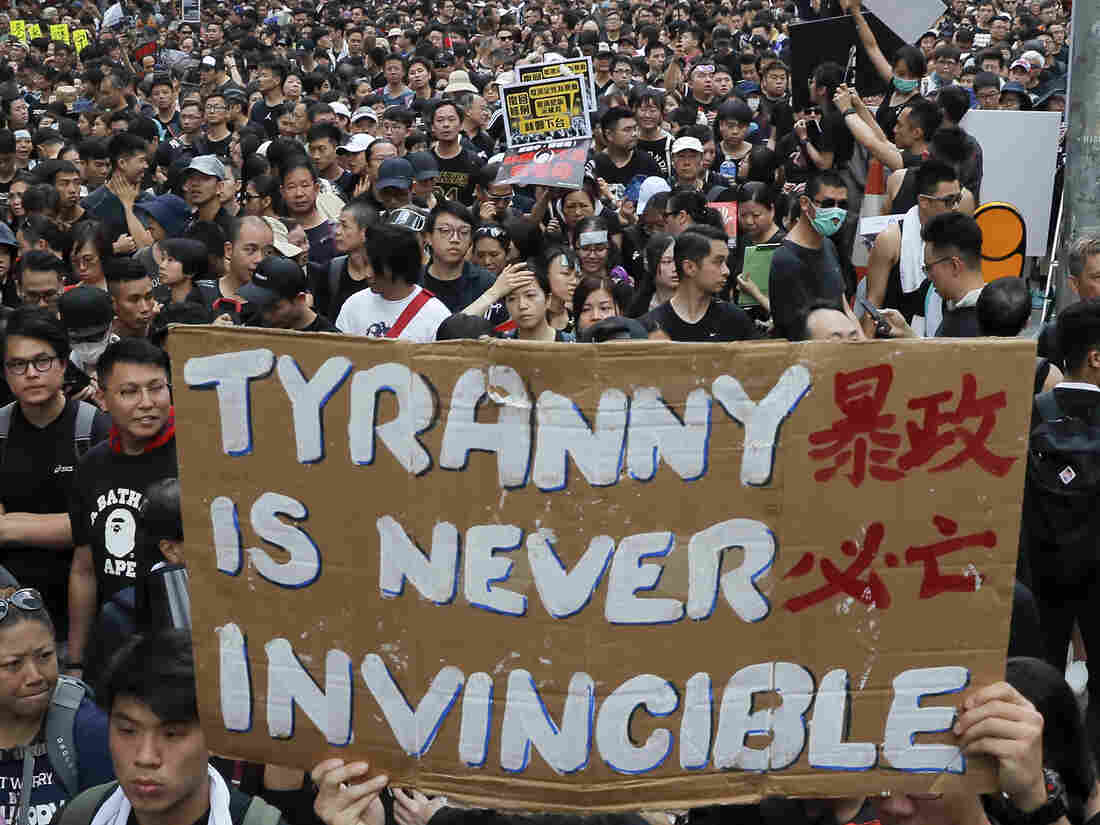 Tens of thousands of protesters carry posters and banners Sunday in Hong Kong as they continue to protest an extradition bill. Kin Cheung/AP hide caption 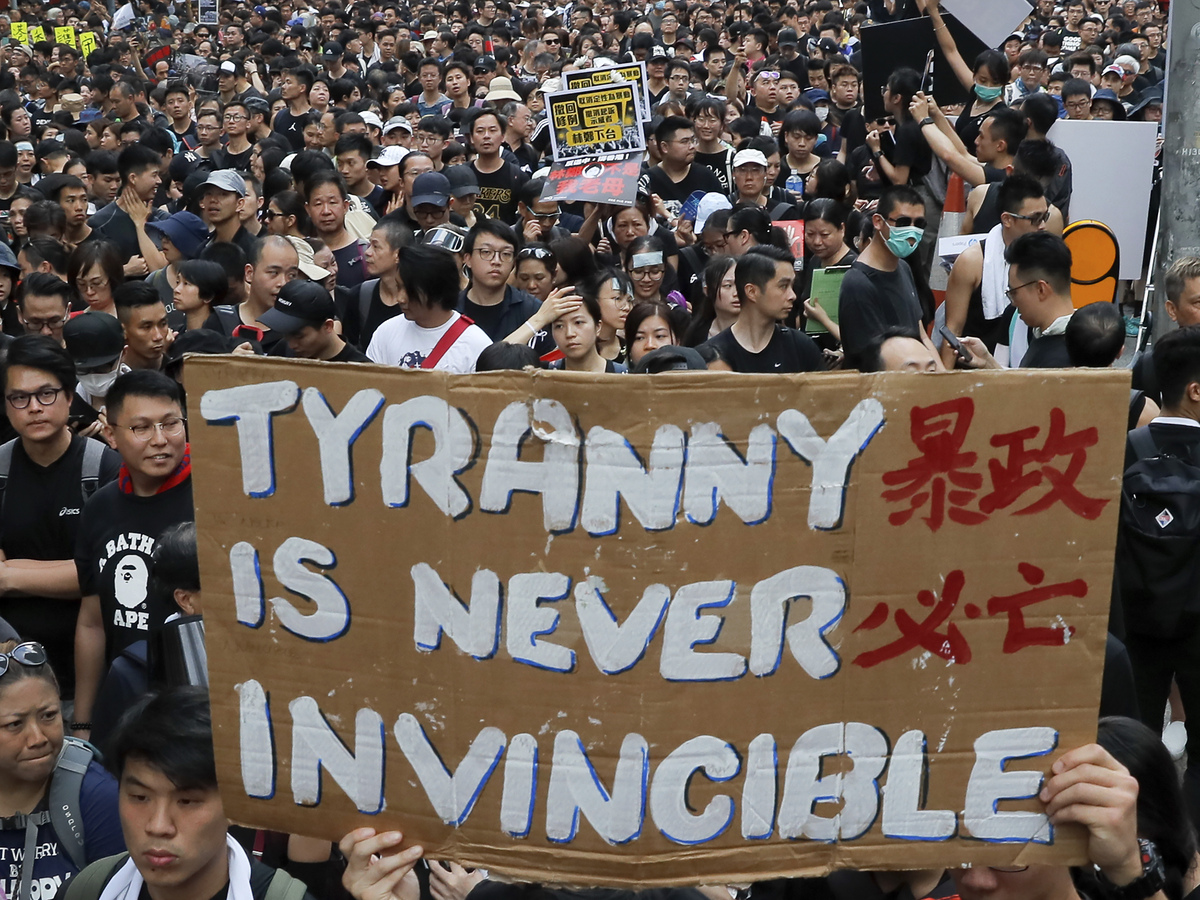 Tens of thousands of protesters carry posters and banners Sunday in Hong Kong as they continue to protest an extradition bill.

Hong Kong's top official Carrie Lam issued a rare apology Sunday for her management of an extradition bill, but stopped short of withdrawing the proposal as protests coursed through the city.

A government spokesman said Lam's handling of the bill had caused "substantial controversies and disputes in society, causing disappointment and grief."

Lam "apologized to the people of Hong Kong for this and pledged to adopt a most sincere and humble attitude to accept criticisms and make improvements in serving the public," the statement added.

Hundreds of thousands of protesters dressed in black marched through Hong Kong, demanding that Lam withdraw the bill and then step down.

The demonstrators held signs that read, "Hong Kong stand firm" and "Hong Kong say no," as they passed under palm trees and high-rise buildings.

The protests came after Lam suspended a bill that would allow criminal suspects to be tried in China. Demonstrators say pausing the bill is not enough. They insist the bill be scrapped instead. They say an extradition agreement with China would undermine Hong Kong's independence and free speech.

"If you press the pause button, you can actually press the play button anytime you want," said a woman who asked to be identified only as Felicia for fear of retribution. "I wanted the government to press the stop button and just forever stop this." 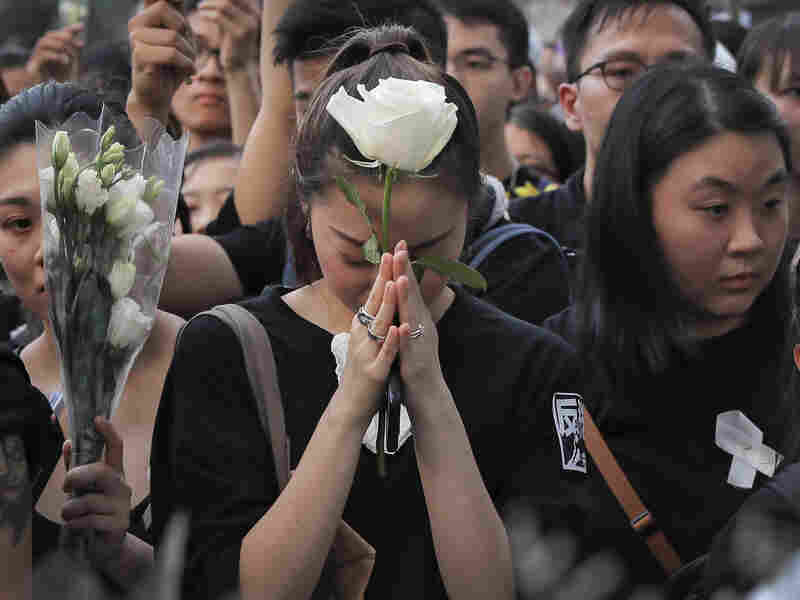 Mourners hold flowers Sunday and pray for a man who fell to his death after hanging a protest banner against an extradition bill in Hong Kong Sunday, June 16, 2019. Kin Cheung/AP hide caption 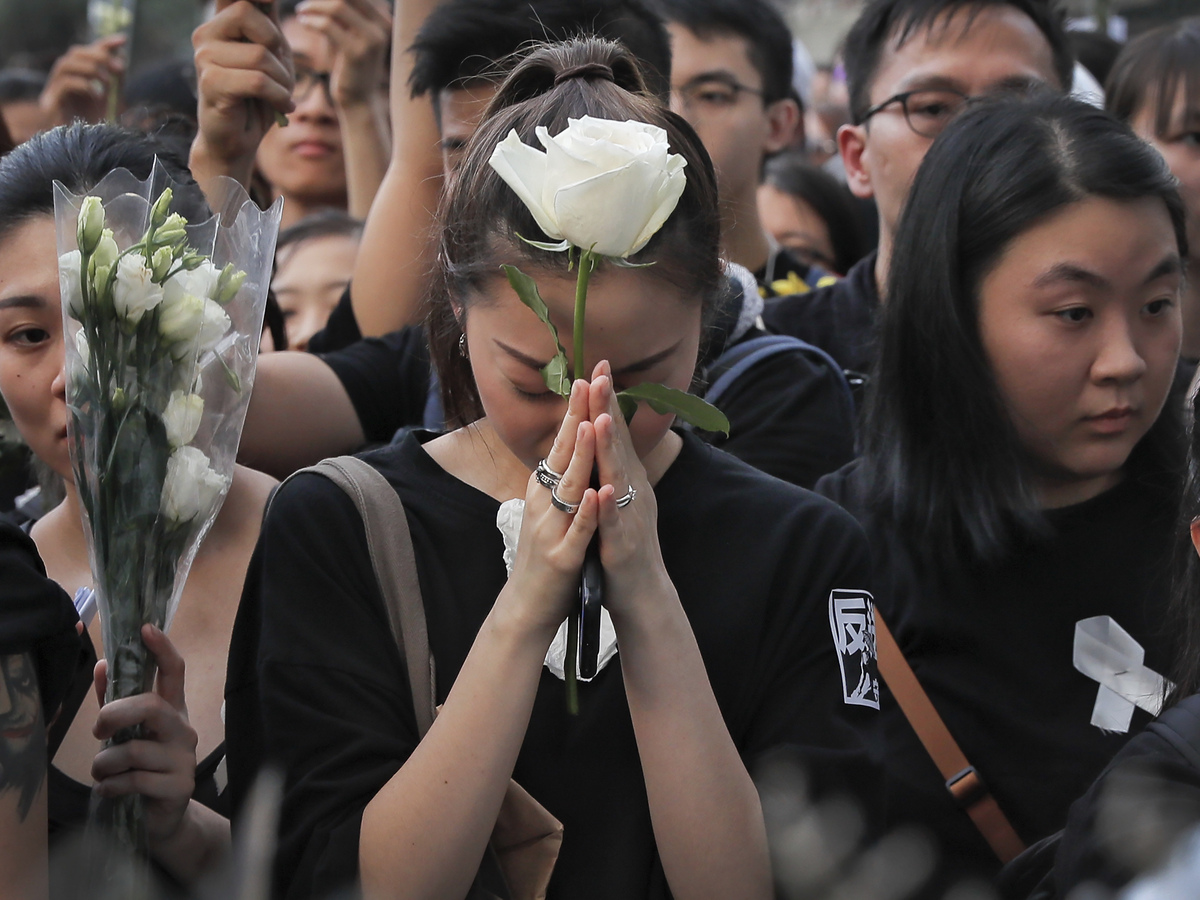 Mourners hold flowers Sunday and pray for a man who fell to his death after hanging a protest banner against an extradition bill in Hong Kong Sunday, June 16, 2019.

When Great Britain relinquished its control over Hong Kong in 1997, China agreed to uphold Hong Kong's independent system for 50 years. But Beijing has gradually eroded that separation.

"The party often rails against Western notions of judicial independence and separation of powers. Forced confessions and torture are a persistent problem, despite legal reforms. Police have huge powers, compared to the courts. And China's ancient legal culture has emphasized the law as a tool for rulers to punish wrongdoers, rather than a way to protect individual rights."

Opposition lawmaker Claudia Mo told reporters she was protesting because "there is no fair trial, there is no humane punishment guaranteed on the mainland."

The extradition bill triggered protests that organizers say drew as many as a million people to the streets last week. On Wednesday demonstrators clashed with riot police and some 80 people were injured.

Lam had been on the defensive following those protests. At a press briefing Saturday, Lam announced her administration would rework the legislation.

"The government has decided to suspend the legislative amendment exercise, restart our communication with all sectors of society, do more explanation work and listen to different views of society," she said.

That was not enough to cancel Sunday's protest. It began in Hong Kong's Victoria Park and flowed to government offices. Mourners piled flowers at the site of a man who fell to his death after hanging a protest banner.

China has accused the U.S. of fomenting the protests, a charge the U.S. and demonstrators reject.

Protester Iris Chan brought her 8-year-old son to the march.

"Some people suggest that we opponents of the bill are brainwashed, or instigated by outsiders," Chan told NPR. "In fact, we have initiated these protests by ourselves."