Accessibility links
Paris' Notre Dame Cathedral Celebrates First Mass Since Devastating Fire A group of around 30 people wearing hardhats gathered for Mass in the cathedral on Saturday, exactly two months after a severe fire. The service was not open to the public. 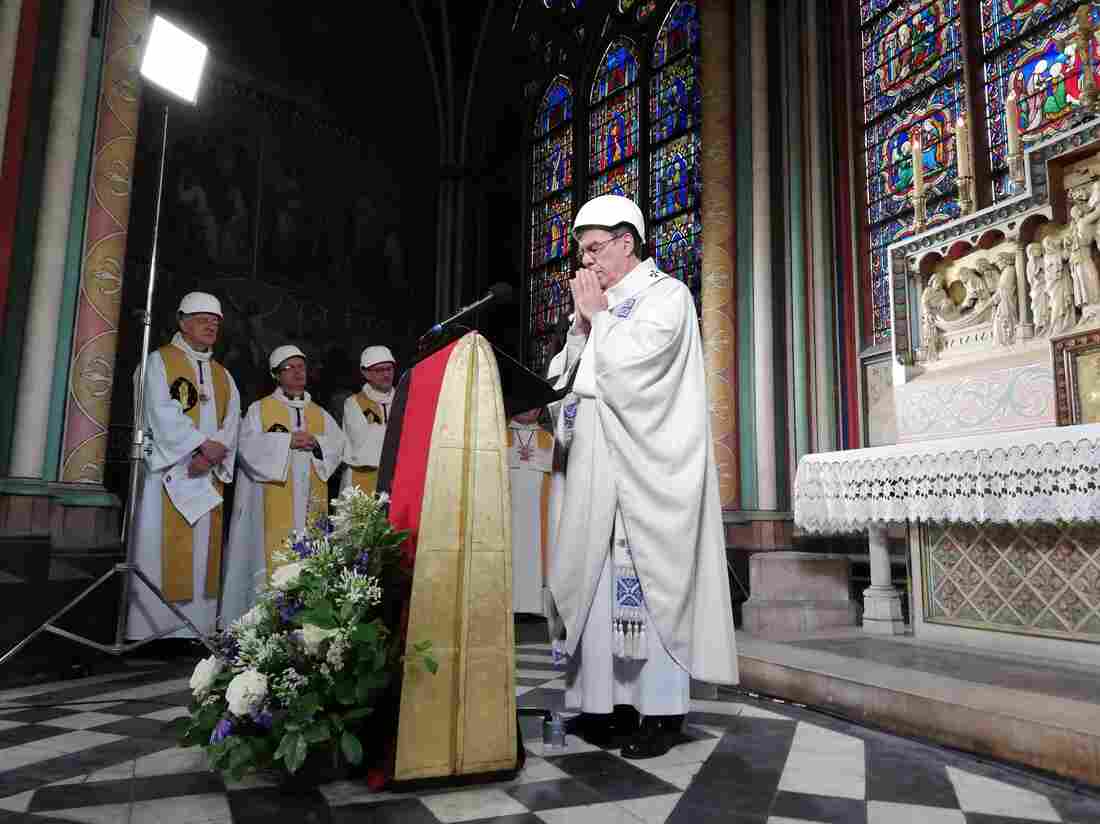 A small group in hard hats gathered on Saturday for Mass in Paris' Notre Dame cathedral. It was the first Mass since a fire devastated the church in April. Karine Perret/AFP/Getty Images hide caption 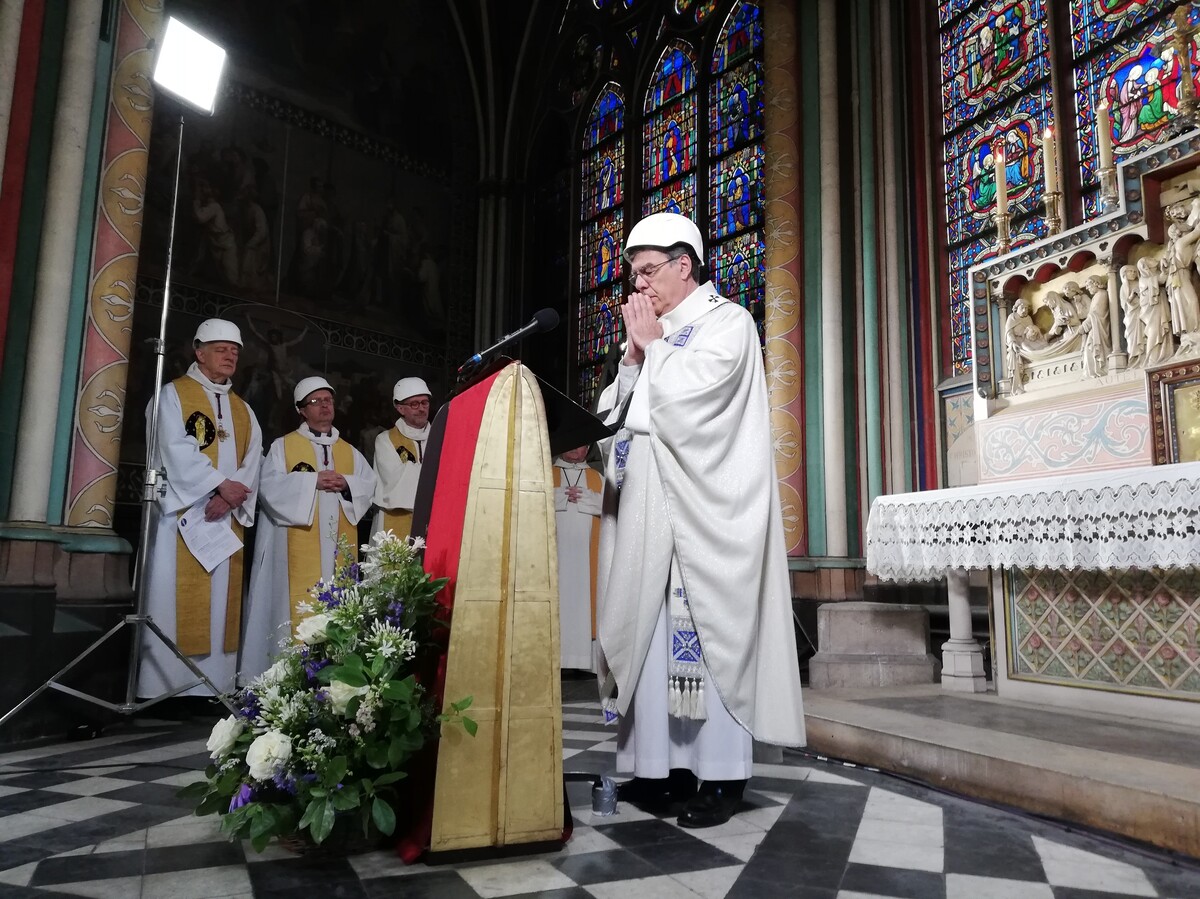 A small group in hard hats gathered on Saturday for Mass in Paris' Notre Dame cathedral. It was the first Mass since a fire devastated the church in April.

Exactly two months to the day after a fire blazed through the roof and spire of Notre Dame Cathedral in Paris, the church celebrated its first Mass on Saturday.

Instead of his traditional miter hat, the archbishop of Paris wore a white, hard hat, along with about 30 others in attendance.

The Mass was closed to the public for security reasons, and those there were mostly clergy and people who work on the site.

France's Culture Minister Franck Riester told French TV on Friday that the structure is still "in a fragile state," and that the partially damaged vault is not secure and could collapse.

Workers won't be able to secure the vault until debris from the fire is completely cleared from the cathedral floor. Research teams are using robots to slowly gather and sort the debris.

Thierry Zimmer, deputy director at the Research Laboratory of Historic Monuments, who is working on the cathedral, said it's "miraculous" that none of the art or objects in the cathedral were damaged by the fire or falling wreckage.

The group attending Mass early Saturday evening gathered in the Chapel of the Virgin next to the choir. It was also a symbolic service in that the cathedral celebrates the consecration of its altar each year on June 16.

The service was broadcast on YouTube by KTO, the French Catholic TV network. Sweeping views of the burned out rooftop and a pile of charred wood and rubble contrasted with the group singing hymns.

In his homily, Archbishop Michel Aupetit described the more than 850-year-old Notre Dame as "the fruit of human genius, a masterpiece of man," appreciated by everyone, not just Christians.

"This cathedral is a religious place. That's its sole purpose," Aupetit said.

He said there are no tourists at the cathedral.

"All who enter here do not come as tourists," he said. "Many come maybe out of curiosity without knowing why, but they are not the same when they leave because there is a presence here."

After The Flames, Notre Dame's Centuries-Old Organ May Never Be The Same Again

Leaving the service, Monsignor Pascal Gollnisch said it was a "shock" to see the destruction as well as how much was still in tact. He works with Christians in the Near and Middle East and gifted a cross carved from the stone of an Aleppo church he said was destroyed by a missile.

"I think it's a beautiful spiritual link between Notre Dame and all the churches in the Near East that have been damaged or destroyed," Gollnisch said. "Notre Dame was an accident, but it's the same shock to see our cathedral in this state."

The plaza in front of the cathedral remains closed to the public, but people still gather at the barriers to get a limited view of the damaged church and to take selfies.

Clergy eventually want to install a temporary chapel on the plaza with a replica of the cathedral's statue of the Virgin Mary so that pilgrims can visit during reconstruction.

French President Emmanuel Macron has set an ambitious deadline of five years to reconstruct and reopen Notre Dame in time for the 2024 Summer Olympic Games in Paris. That plan and his suggestion to replace Eugène Emmanuel Viollet-le-Duc's 19th-century spire with a modern incarnation have drawn criticism from the public and experts.

Nearly $1 billion in donations have been pledged from around the world for reconstruction, but the French Ministry of Culture said less than 10 percent of that has actually been received.

In an earlier version of this story, Monsignor Pascal Gollnisch was identified as Monsignor Patrick Gollnisch.