Accessibility links
'Patron Saints Of Nothing' By Randy Ribay Is A Book For 'The Hyphenated' Young adult author Randy Ribay says it's tough having "a dual identity" in a world "where people want you to be one thing." His new novel explores the Philippine government's deadly war on drugs. 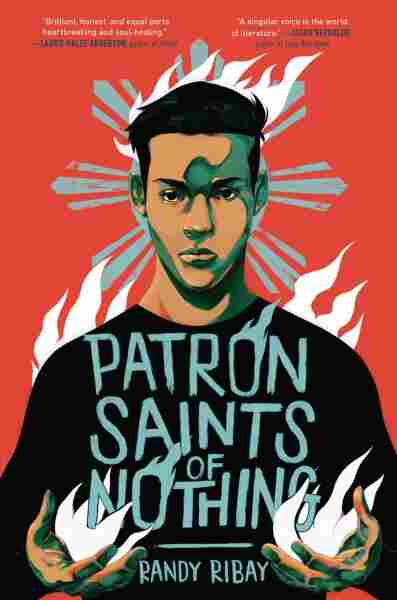 Patron Saints of Nothing

Young adult author Randy Ribay is Filipino American and says his latest book Patron Saints Of Nothing is dedicated to people like him: "The Hyphenated," he calls them. And not just Filipino Americans, Ribay tells NPR's Morning Edition, but also anyone else who would consider themselves more than one thing.

"The difficulty with a dual identity is just trying to figure out what does it mean to be more than one thing in a world where people want you to be one thing," he says.

Ribay explores these complex feelings through the lens of the bloody war on drugs that's been raging in the Philippines for the last three years.

Launched by President Rodrigo Duterte almost immediately after he was sworn into office in June 2016, the campaign has been heavily criticized for what human rights groups call extrajudicial killings. Some estimates by rights groups and opposing politicians say more than 20,000 have been killed, while the official statistics released by the Philippine police are much more conservative.

As the bodies of mainly poor people and low-level drug pushers pile up in the morgues and in the Philippine jails, the effectiveness of the crusade has been hotly debated (though Duterte remains popular.) It's a conversation that extends past shores of the Southeast Asian archipelago and extends to Filipinos, their families and descendants living abroad — including in the United States.

The Filipino American community's relationship with the drug war is complicated, and while Ribay says no one in his family has yet been affected by the violence, like many Filipinos who live in America, it's still on his mind.

"Ultimately the thing that draws me to the topic is fear for the people that I love," he says. "I do have a lot of family still in the Philippines and so whenever I think about this it's like: Could this happen to them?"

Philippines' Duterte Is A Divisive Figure, Even Abroad

Additionally, Ribay wrestles with another question: Should he even be speaking or writing about this?

"I created [Patron Saints of Nothing], ultimately, as a way to confront that question: What's my role as a Filipino American who is at once connected, but also an outsider to what's happening in the Philippines," Ribay says.

He explores this question through the novel's main character, Jay, whose cousin is killed as part of the drug war. When Jay travels to the Philippines in an attempt to unravel the mystery of his cousin's death, Ribay says the teen must also face the realities about a place, a people and even a family he thought he knew.

"Once you leave [your country of origin] you have a different set of experiences and it's just a completely different realm," he says. "You can call people, you go back and visit every now and then, but it's not the same as living there."

As a Filipino American I'm always kind of keeping an eye on the news of what's happening in the Philippines. ... And so my initial reaction is that this is just a glaring human rights abuse, but it was kind of striking to me that most of my Filipino family — as well as, if you are to believe surveys — most Filipinos supported the drug war. And so I kind of had this moment where I was like, "Well, what right do I have to speak on this topic kind of as an outsider? As somebody who hasn't lived in the Philippines since I was a baby?"

On whether he feels qualified to write Filipino characters

That's a risk you take as a writer anytime you write something. I think it becomes especially poignant when it's a community that you care about deeply. Like I said, my intended audience is Filipino Americans, but then also Filipinos. And so I care about getting it right and I care about kind of representing things as accurately as I can. Of course, it's not an easy thing, right, because everyone has a different experience.

At my end it's kind of a matter of doing the research and trying to get the facts right. ... [And] considering how the differences between us might lead to different perspectives, and justify those different perspectives. As well as getting sensitivity readers — I had several Filipinos read through it and kind of give me their take on whether I was portraying things accurately. ... I went [to the Philippines] and visited some of the places that I mentioned in the story just to make sure factually that those places were accurately presented.

I think it says that there is this connection, but if you are to foster that connection, [and] kind of make it something meaningful, there is this need to, one, acknowledge what you don't know and then, two, learn — and doing those things kind of strengthens that connection. ... I think one ends up with a stronger sense of who they are, especially as somebody with a dual identity, it can strengthen that; it can lessen or mitigate those feelings of not being something enough, right? Not being Filipino enough, or not being whatever the second piece of the identity is.

Read an excerpt of Patron Saints of Nothing