Accessibility links
Can Clean Energy Goals Help Slow Climate Change? Cities, states, businesses and electric utilities are setting ambitious goals to cut greenhouse gas emissions. But it's not clear exactly how they'll do that or whether it will actually work. 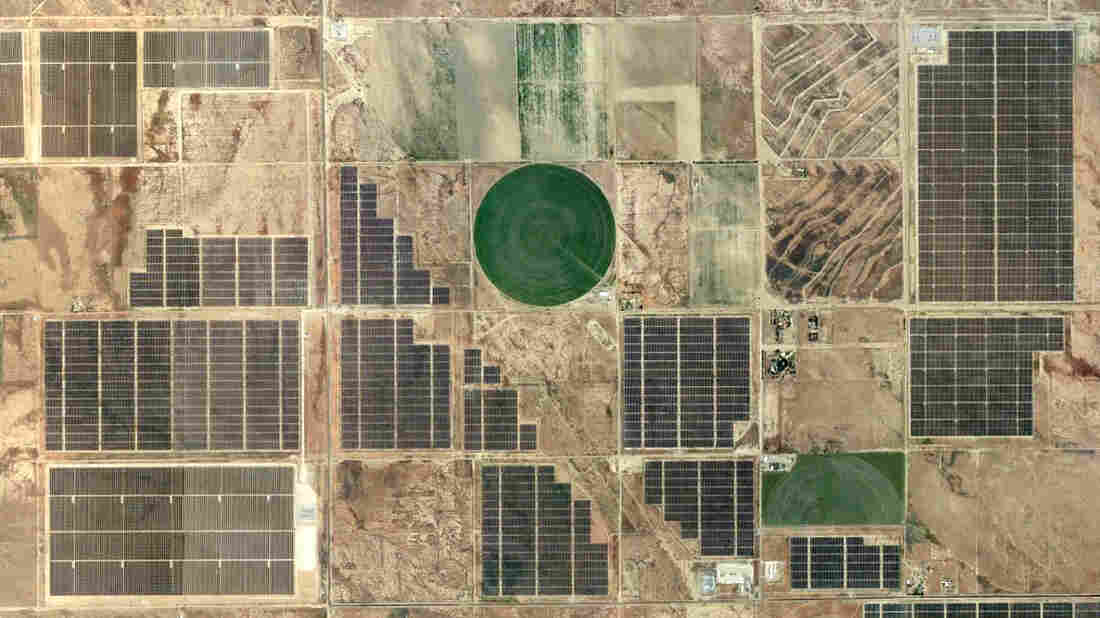 The northern Antelope Valley in California is home to a number of large-scale solar panel installations. Google Earth hide caption 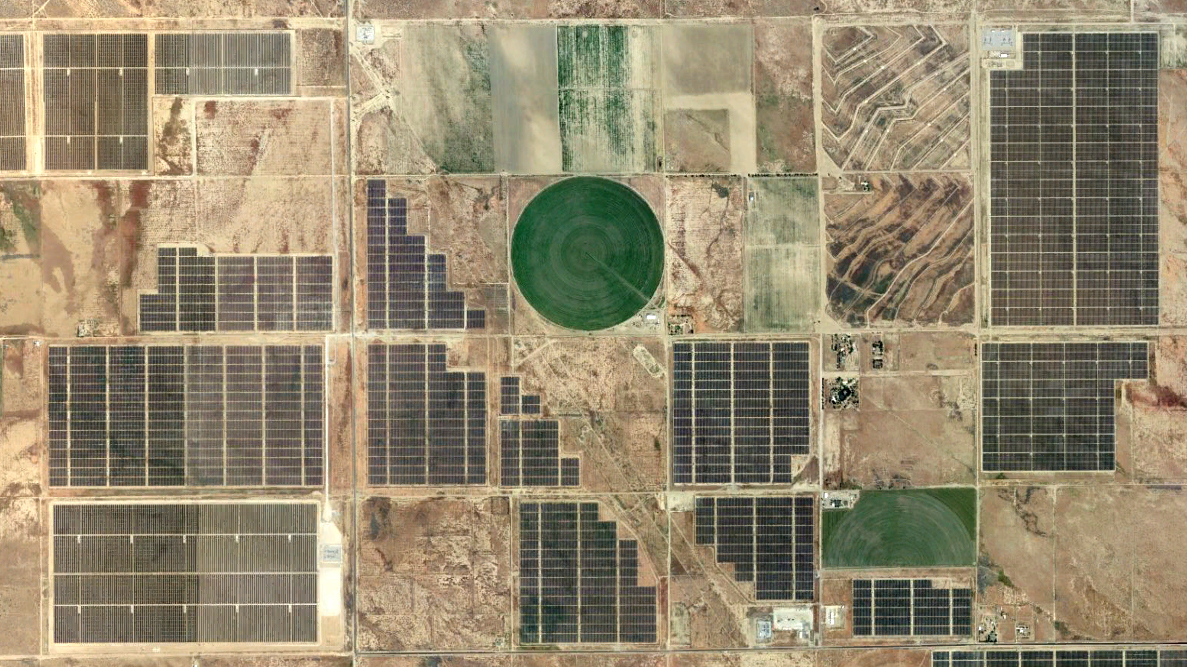 The northern Antelope Valley in California is home to a number of large-scale solar panel installations.

The warnings come with unsettling regularity:

Warmer oceans could lose one-sixth of their fish and other marine life by the end of the century.

Global warming is a major risk to the economy.

The world's leading scientists have made it clear that to prevent the worst effects of climate change, there needs to be "rapid, far-reaching and unprecedented" changes to our energy systems. In simpler terms: We need to stop adding carbon dioxide to the atmosphere.

Federal action to curb greenhouse gas emissions in the U.S. seems unlikely in the near future. The Trump administration is going the other way, rolling back regulations to cut emissions.

Cities, states and companies use different language for their climate goals, and subtle differences can mean vastly different things. Here's a guide to some of the terminology:

Carbon free means no carbon dioxide emissions. A state would be getting all of its electricity from renewable or clean sources like solar, wind or nuclear.

Carbon neutral means that a city or state is removing as much carbon dioxide from the atmosphere as it's putting in. The net amount of carbon emissions is zero. This can be achieved through carbon offsets like carbon sequestration or planting trees.

Clean energy encompasses all renewable energy and more. It can also include nuclear energy and fossil fuel consumption with carbon-capture technology.

But a growing number of cities, states, electric utilities and businesses are recognizing the risk presented by climate change and making their own pledges to reduce emissions.

Just in the past year, three states — including California, the world's fifth-largest economy — plus the District of Columbia and Puerto Rico made commitments to get all of their electricity from carbon-free or carbon-neutral sources in the next few decades. More than 100 cities and counties have signed similar pledges, and at least three presidential candidates are proposing climate plans that call for the U.S. to become carbon-neutral by 2050.

"It feels to me like we're headed toward a decarbonized energy system," says Rolf Nordstrom, president of the Great Plains Institute, a nonprofit energy research group. "Now it's just down to how fast and what that energy mix looks like."

Despite the growing push to reach "zero carbon," there are big questions around whether these goals are possible and how much they would actually slow climate change. Here's an attempt to answer some of them.

Four states — Hawaii, New Mexico, California and Washington — as well as Puerto Rico and Washington, D.C., are leading the decarbonization charge. All of those places have enacted legislation requiring that they get all of their electricity from renewable or clean sources by 2050 at the latest.

Nevada and Colorado went one step short of that, establishing a goal, not requirement, of 100% carbon-free energy by 2050.

At least 9 other states have proposed similar mandates or goals, according to EQ Research, a renewable energy consulting firm.

In the meantime, local governments in those states and others are taking action on their own.

More than 100 localities across the country — from Buncombe County, N.C., to Spokane, Wash. — have committed to getting all of their electricity from clean or renewable sources. The Sierra Club has a nifty list of cities making similar pledges.

Electric utilities, responding to customer demand (and eager to have support for new infrastructure), are getting in on the action, too. Xcel Energy, which serves eight U.S. states, announced its own 100% clean energy goal by 2050. A handful of other utilities have followed suit. 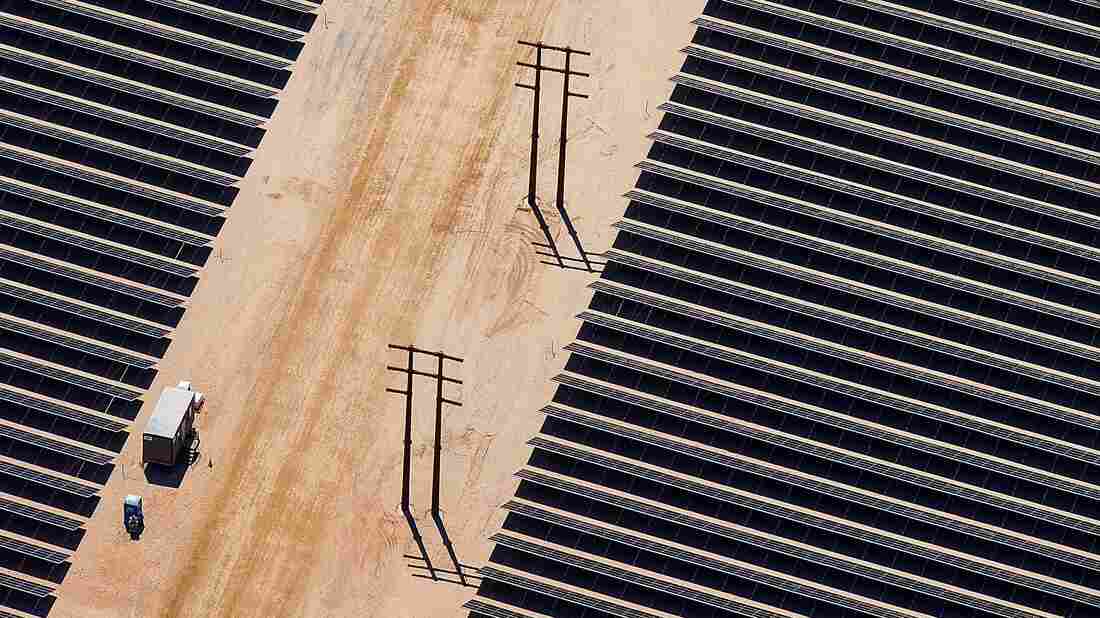 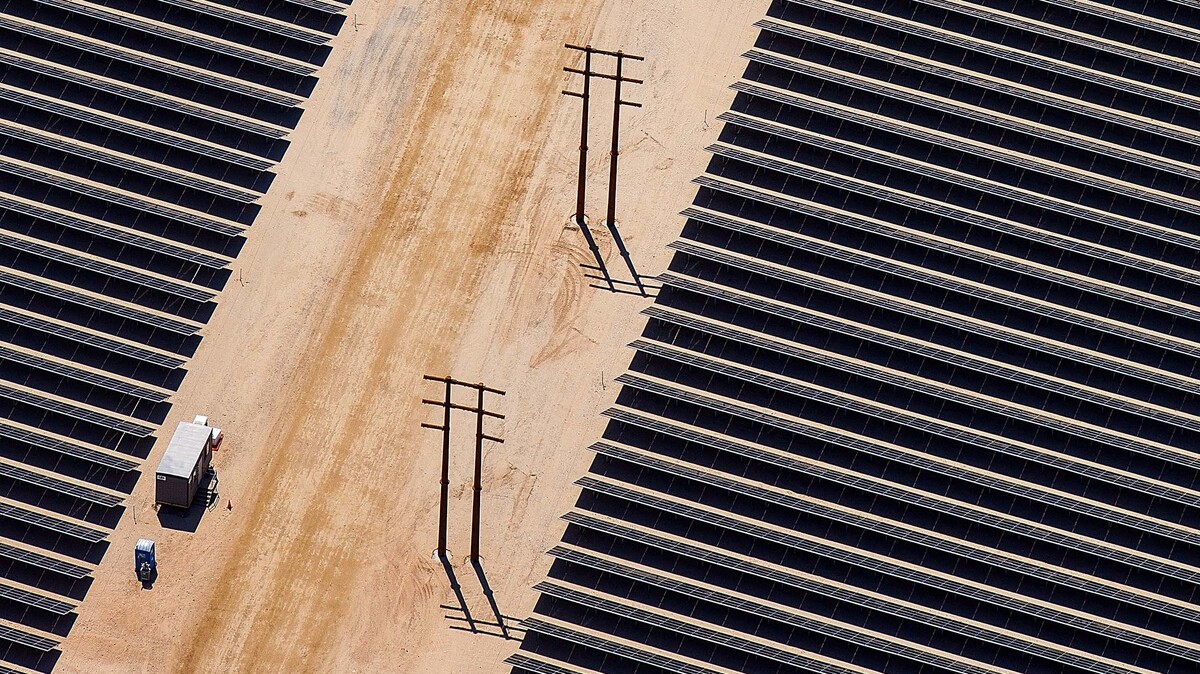 Business is also pushing for clean energy. The group RE100 says that about 180 private companies, including giants like Google, Nike, Facebook and Johnson & Johnson, have committed to 100% renewable goals.

Why are they doing it?

Climate change not only poses a risk to human health and life, but it could cost the U.S. economy hundreds of billions of dollars. State, city and business leaders aren't blind to that fact.

For more on what's at stake, see the United Nations' Intergovernmental Panel on Climate Change report. The threat is real.

Shortly before signing her state's carbon-free goal earlier this year, New Mexico Gov. Michelle Lujan Grisham pointed to that report, which said greenhouse gas emissions need to be sharply reduced by 2030 to avoid the worst effects of climate change.

"We are clear that we have basically a decade to begin to turn things around, and New Mexico needs [to] and will do its part," she said.

But the need to address emissions is hardly the only factor driving the wider shift toward renewable energy sources.

It's a convergence of social, economic, technological and political factors.

The latter being fueled, in no small part, by the inaction at the national level.

"There's the complete abdication of responsibility and leadership at the federal level, within the Trump administration and other leaders in Congress," says Jeff Deyette, the director of state policy in the climate and energy program at the Union of Concerned Scientists. He says cities and states are stepping up to fill that void and, in some cases, score political points.

The "blue wave" of last year's midterms saw cities and states elect lawmakers who vowed to take action on climate change. Environmental groups have been focusing their efforts on the state and local level.

Renewable energy is also becoming more affordable and more popular than fossil fuels in some places. A survey by Consumer Reports last year found that roughly three-quarters of respondents felt that increasing renewable energy is a worthwhile goal.

On the technical side of things, advancements are being made in energy storage and energy efficiency, making an eventual renewable energy grid more realistic.

Is "zero carbon" even possible?

This depends on whom you ask.

There are some energy analysts and academics, like Mark Jacobson, director of the Atmosphere and Energy Program at Stanford University, who say the answer is a resounding yes.

Jacobson drew up plans for 139 countries, showing how they could move to 100% renewable energy sources by 2050. He has done the same for all 50 U.S. states.

"It's technologically and economically possible," he says. "But there are social and political barriers."

Jacobson says it would cost the U.S. about $9.5 trillion to transition the country's entire energy economy — transportation, electricity, agriculture and industry — to carbon-free sources.

That may seem like a lot, he says, "but if you actually transitioned to clean, renewable energy for everything, you eliminate the health and climate costs [associated with fossil fuels]." In the long run, he argues, the country would be saving money.

Other energy analysts and academics aren't so sure that it's feasible to reach zero carbon, using only renewable energy, on an economywide scale. It's theoretically possible, they argue, but the challenges to get there are many.

Most cities, states and businesses are taking a narrower focus, aiming to just get all of their electricity from carbon-free sources (electric generation being only one piece of the greater emissions pie).

But that's not without challenges too.

Powering an entire state like California, with its nearly 40 million residents, with renewable or clean energy would require huge amounts of energy storage and massive infrastructure projects, which don't always have local support.

For cities or counties making renewable commitments, "many of them don't really have the tools to implement their vision," says Leah Stokes, an assistant professor of political science at the University of California, Santa Barbara. "Utilities often work at the state level, not the local level."

Atlanta is a good example of this.

Are 'zero carbon' goals the most effective way to cut greenhouse gases?

"All evidence points to no," says Sanya Carley, an associate professor at Indiana University's School of Public and Environmental Affairs. "The most efficient and cost-effective way to reduce carbon emissions would be directly pricing carbon and putting a price tag on the cost of those emissions."

In other words, something like a carbon tax would bake the environmental and health costs of greenhouse gas emissions into the existing market economy. It would be a rapid, large-scale way to incentivize reductions across all sectors.

A 2018 study by the Massachusetts Institute of Technology found that putting a price on carbon and returning the revenue from it to the public would reduce greenhouse gas emissions. The higher the cost, the greater the reductions.

That's why we're seeing more of them.

But they should still help slow climate change, right?

But remember that most of these efforts are focused on cutting greenhouse gas emissions from the electric sector, and electricity generation accounts for less than a third of the country's total emissions. Transportation is now a larger source.

The other problem is scale.

"[Climate change] is a global problem, so that's the scale at which you'd want your solution," says Noah Kaufman, an economist at Columbia University's Center on Global Energy Policy. "In lieu of that, second best would be at the national level, but we've pretty much failed to pass any serious climate policy."

A piecemeal approach won't do it, he says.

The overall trends aren't great either. Greenhouse gas emissions continue to rise globally. In the U.S., carbon dioxide emissions are increasing as well, after several years of decline.

"My guess is that when our successors look back at Statistical Reviews from around this period, they will observe a world in which there was growing societal awareness and demands for urgent action on climate change, but where the actual energy data continued to move stubbornly in the wrong direction," wrote Spencer Dale, BP's chief economist in a review of the findings.

He described it as "a growing mismatch between hopes and reality."