Accessibility links
'The Accident Of Color' Looks At The Failure Of Reconstruction Daniel Brook has written a book that goes a long way toward injecting thoughtfulness into popular notions of the history of race and racism in America but doesn't delve far enough into class conflict.

'The Accident Of Color' Looks At The Failure Of Reconstruction

'The Accident Of Color' Looks At The Failure Of Reconstruction 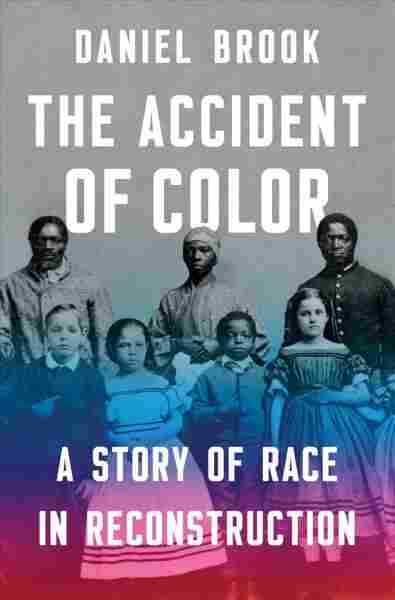 The Accident of Color

A Story of Race in Reconstruction

Why did Reconstruction fail? It's a heady question for American historians — not least because despite seminal scholarship on the subject, from W.E.B. Du Bois' Black Reconstruction in America and Eric Foner's Reconstruction: America's Unfinished Revolution, key elements are still missing in our narratives about Reconstruction.

This is, perhaps, due to some not-insignificant resistance to the ideas of Du Bois and Foner themselves; for being too Marxist, for instance, as with Du Bois' idea of the "psychological wage" gained by poor whites that allowed the white worker to feel superior to the black worker. Or for emphasizing labor along with race, as with Foner's focus on the formation of a class structure subservient to Northern industrialists.

That Reconstruction did indeed fail is clear — but the "whys" vary. When Du Bois published Black Reconstruction in 1935, he responded to a historical consensus that Reconstruction was a failure because it was fundamentally a mistake. The infamously racist film The Birth of a Nation in 1915 that depicted black people as savages and the Ku Klux Klan as heroic is a reminder of that narrative. Traitorous Radical Republicans and racially inferior freedmen were simply incapable of exercising their political rights.

But even today, matters about Reconstruction do not remain simple — a context to which Daniel Brook responds in his new book, The Accident of Color: A Story of Race and Reconstruction. The consensus today is that it was not so much class but the fundamental fact of whiteness that mattered. Southern antebellum racism was simply too intransigent. And so we draw a line — straight from the racist backlash to Reconstruction all the way to the current presidency as a response to the previous one. Race resentment is the crux. Adam Gopnik, writing in The New Yorker, puts this succinctly, connecting the consensus just as he dispenses with Du Bois' psychological wage:

"This is to give a Marxist-sounding name to a non-Marxist phenomenon: ethnic resentment and clan consciousness are social forces far more powerful than economic class."

Brook's idea is ostensibly to demonstrate how racial categories of whiteness and blackness were formed in the first place, and how the ossification of these categories impacted Reconstruction. It's a history that uses as its test cases the cities of Charleston and New Orleans, challenges to the racial binary because of the large free Caribbean or Creole mixed-race populations for whom racial mixing with "free white people" and even slave-owning ones was the lived reality. "Brown Charlestonians," Brook writes, "a middle class that was neither black nor white, could fit into their hometown because, from its founding, Charleston was one mixed-up city."

Brook zooms in on idiosyncrasies. Most mixed-race free men in antebellum Charleston were blind to the ills of slavery, and Creoles of color in New Orleans found even elite professions very much in reach, with some amassing great wealth. These aren't particularly new insights, to be sure, but reading about two Southern cities as a challenge to the tidy notion that the South wasn't ready for civil rights is refreshing. During Reconstruction even biracial people understood that any attacks on the rights of freed ex-slaves would inevitably come their way. As the one-drop rule to confirm "whiteness" began to be tacitly used and later codified, it ensured that conductors of streetcars or owners of barbershops could arbitrarily and dubiously expel persons who looked fairer in complexion than "known" white persons.

When the Supreme Court gave the ultimate death knell to Reconstruction civil rights in 1883 by striking down the Civil Rights Acts of 1866 and of 1875, Brook writes, "fervent denial of interracial realities became the norm — even in Charleston, where it had always been tacitly understood that the elite whites were kin to the elite Browns." White families began cutting ties with African American members of their own families. The fictitious racial categories that were being forced upon America, largely by dint of Supreme Court decisions, had hardened. And they began to be enforced when the cost to white people associated with black and brown people became clear.

This is valuable history. However, if it's often unclear what purpose Brook is writing toward, it's because the complications of biracial and mixed-race populations seem more to bookend The Accident of Color than provide a throughline for it. For much of the book, Brook charges through the forward-looking civil rights history that boldly advanced desegregation and suffrage for all men of color before the collapse of Reconstruction and rise of Jim Crow nullified them — and ushered in the caste system that arguably exists to this day. The reason for the lack of a throughline is perhaps obvious: Even if the first House and state legislatures to include men of color largely seated elite men who had never been enslaved, the fact remained that Reconstruction civil rights were advanced largely through an alliance between black and brown people. In a sense, the idiosyncrasies that make Charleston and New Orleans seemingly important test cases for Brook also effectively render them far less anomalous once this alliance was formed.

When Reconstruction collapsed, people picked categories they could get away with. Brook points out the interesting fact that Homer Plessy — the mixed-race Louisiana Creole and plaintiff in the infamous Supreme Court case Plessy v. Ferguson that upheld as constitutional the separate-but equal-doctrine — was later marked "white" on the national census.

It's an interesting fact, to be sure, but how new it is to our understanding of Reconstruction is unclear. Perhaps this is because Brook misses a key opportunity that Du Bois and Foner didn't — to incorporate the facts of labor, or factors of political economy that have been used to explain the Northern resignation of post-Reconstruction racial revanchism, into the narrative. Indeed, Brook rarely talks about wage labor of any kind, focusing instead on schools, streetcars and legislatures. Of course, Brook hasn't set out to revise Reconstruction history, and to be sure Brook's goal is to complicate the tidy consensus that has formed. But any account of race in Reconstruction would be all the more nuanced if one simultaneously reckoned with Du Bois' contention that for Northern whites, Radical Reconstruction became a problem partly because it was a problem for Northern capital: Any economic assistance to the poor in the South was antithetical to free market ideology. Indeed, that the first Northern Black congressman was not elected until 1920, or that land confiscation and distribution across the South were strenuously railed against in the North are just as interesting as the story of Plessy — and as such, they can only be understood if one reckons with class conflict as well as the formation of racial categories. Not even the economic depression of 1873 merits consideration.

Which, ultimately, is a shame. Brook has written a book that goes a long way toward injecting thoughtfulness into popular notions of the history of race and racism in America, but he also doesn't go far enough. After all, the story of the social construction of race cannot really be told without understanding the motivations — both racial and nonracial — that undergird it.

Kamil Ahsan is a biologist, historian and writer based in Chicago. He is an editor at Barrelhouse and his work has appeared in the Los Angeles Review of Books, The American Prospect, Salon and Chicago Review, among other places.